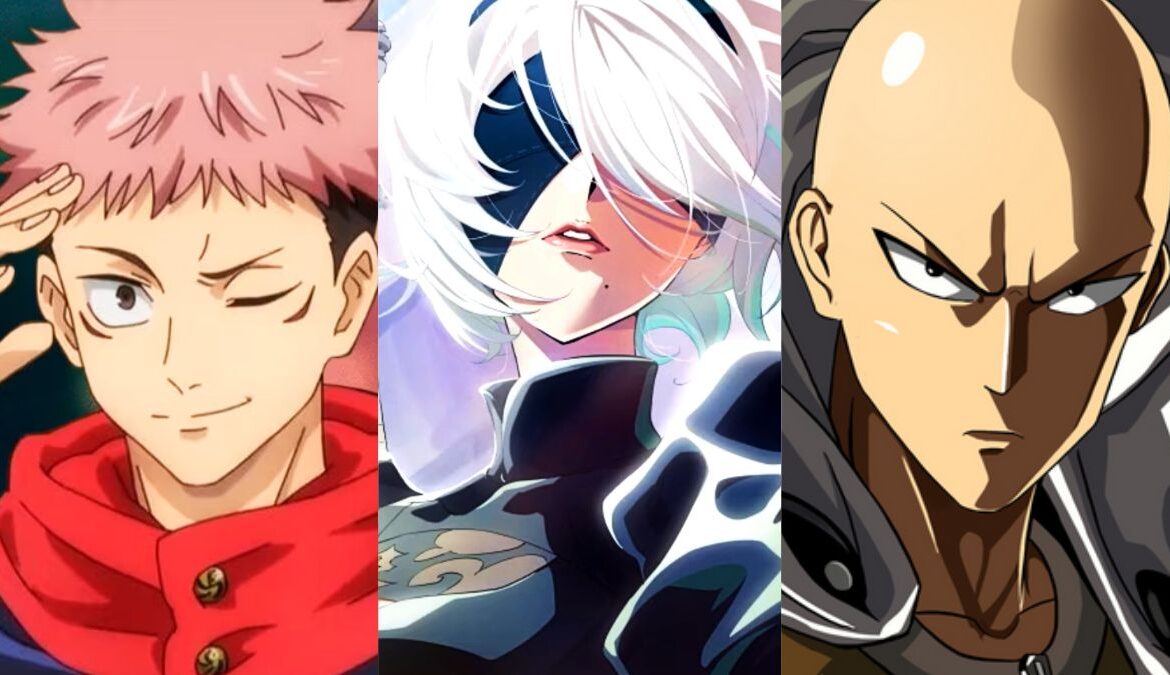 The last couple of years have been fantastic for anime fans worldwide, with several new titles earning their time in the spotlight and old ones remaining quite successful. With the number of options to choose from, there’s no shortage of anime, no matter what genre you pick. Despite that, there are still a lot of big new anime of 2023 that are coming your way.

There’s no better way to start the year than watching Vinland Saga: Season 2. That’s right, the Norse tale written by Makoto Yukimura will return on January 9th, 2023. Vinland Saga also received a studio change, with MAPPA taking over instead of Wit Studio for Season 2.

Season 2 will also continue where the first season left off, adapting the second arc of the manga, the Slave arc. In this storyline, Thorfinn will be sold into slavery as atonement for his actions in Season 1. He’ll also meet new people and go through many emotional moments this season.

Another fan favorite that’ll return for another season in 2023 is Record of Ragnarok. Written by Shinya Umemura and Takumi Fukui, the battle between Gods and humans will continue this upcoming January 26th, 2023. Since the previous season was criticized for its animation quality, Graphinica will be accompanied by Yumeta Company this season.

Season 2 will resume the tournament between Gods and humans, with the next fight being the fourth one. It’ll feature a battle between the legendary hero Hercules and the serial killer Jack the Ripper. With the fate of humanity at stake, expect more fights to come in Record of Ragnarok: Season 2.

If you miss the Armed Detective Agency, you’ll be happy to hear that Bungou Stray Dogs is returning for Season 4. The anime’s official Twitter account announced that Season 4 will air in January 2023, but it hasn’t revealed the exact release date.

In the upcoming season, things will start off by showing the aftermath of the Cannibalism arc. Afterward, it will move forward to the Hunting Dogs arc, where the members of the Armed Detective Agency will be hunted after they’re wrongfully labeled as terrorists.

You read that right. It’s confirmed that NieR: Automata, the action-roleplaying game developed by PlatinumGames, will receive an anime adaptation. The adaptation will be animated by the studio A-1 Pictures, which will be released in January 2023, according to its official trailer.

Since the anime will have a slightly different story than the video game, it was entitled NieR: Automata Ver1.1a. The director, Yoko Taro, confirmed that the anime will have a few discrepancies to the original story so that it doesn’t become an exact copy. Taro also assured that even though the anime may take different turns, it’ll respect the fans of the game.

Another anime that fans are anticipating is Spy Classroom, a spy-fantasy story written by Takemachi and illustrated by Tomari. With the success of Spy x Family, the spy genre doesn’t stop there as we await Spy Classroom in January 2023.

The story takes place after a devastating war, where people realize that weapons are too dangerous, so they fight with deception instead. In a world where wars are fought with spies, a spy named Klaus is tasked to train seven girls to become expert spies that can handle any task.

After Season 1 ended in 2020, The Misfit of Demon Academy is finally returning with Season 2 in January 2023. Based on the light novel written by Shu, the action-fantasy will retain its original animation studio, Silver Link, for its second season. However, the voice actor of Anos, the main character, has been replaced due to ongoing allegations.

Despite the controversy with the voice actor, Season 2 will still push through and pick up where Season 1 left off. It will start in Volume 4 of the light novel, wherein Anos retakes his rightful place as the Demon King, along with a new threat looming around the corner.

After its cliffhanger ending in Season 1, Tokyo Revengers was bound to get another season. The first season’s animation studio, Liden Films, was also in charge of animating Season 2, which will be released by January 2023.

Tokyo Revengers: Season 2 will cover the Christmas Showdown arc, also known as the Black Dragon arc. It features a potential battle between the Tokyo Manji Gang and the Black Dragons, which leads to a dystopian future if they fail to prevent it.

You might have heard of an old anime named Trigun that aired in the 90s. Fortunately, Trigun is getting a reboot in the form of Trigun Stampede. The new revamp of Yasuhiro Nightow’s work will be animated by the studio Orange, which will be released next year in January.

The story follows Vash the Stampede, a man with a $$60 billion bounty on his head. The prize for capturing him will lead to many dangers and conflicts on his path to promoting peace. Vash is also not your typical human, so you’ll have to watch the anime to see his full capabilities.

Dr. Stone: Season 3 is one anime confirmed to come in Spring 2023. It’ll be animated by the same animation studio, TMS Entertainment, and it’s also scheduled to be released in April 2023. With many questions left unanswered, expect the upcoming season to shed some light on their world’s mysteries.

Season 3, also entitled New World, will adapt the Age of Exploration arc. This means that the Kingdom of Science and the Empire of Might will finally unite to find the source of the light that petrified their world.

Another big title to come out in 2023 is Attack on Titan: Season 4 – Part 3. The anime adaptation of Hajime Isayama’s manga will finally be concluded in this last installment from MAPPA. Although it’s been confirmed to be released in 2023, an exact air date is yet to be revealed.

The final season of Attack on Titan will likely close any loose threads of the series. They also have to deal with the Rumbling, which is currently well on its way to destroying most of the world.

Season 3 will likely cover the Mixed Training Camp arc, where the students’ abilities are tested again. Furthermore, tensions arise between Ayanokoji and Sakayanagi, which may lead to a showdown this next season.

A new anime you should also look forward to is Hell’s Paradise: Jigokuraku. Written and illustrated by Yuji Kaku, the anime adaptation will finally start airing in 2023. However, the specific release date in 2023 is yet to be confirmed.

Hell’s Paradise: Jigokuraku follows the story of an assassin named Gabimaru the Hollow. After being sentenced to death row, yet unable to die due to his superhuman physique, he’s given one last chance to be pardoned for his crimes.

Another famous anime returning for a new season is Jujutsu Kaisen. After the release of its prequel movie, Jujutsu Kaisen 0, fans are eager to watch Season 2. Thankfully, MAPPA will continue to animate Gege Akutami’s work for another season.

Jujutsu Kaisen: Season 2 will cover the Gojo’s Past arc and the Shibuya Incident. Both storylines will give you exciting fights and vital turning points for the story. Pair that with MAPPA’s outstanding animation, and you have a must-watch anime for 2023.

Mushoku Tensei: Jobless Reincarnation was one of the best isekai anime released in recent years. After the first season’s success, the studio Bind is returning to animate Season 2 of the hit anime, which will be released sometime in 2023.

The second season will start from Volume 4 of the light novel, covering the Mid-Level Adventurer arc. In this arc, Rudeus heads to the city of Rosenburg, hoping to find his mother, Zenith.

Based on the popular manhwa by Chugong, Solo Leveling will finally get its well-deserved anime adaptation. The anime will be adapted by A-1 Pictures, and it’s currently slated for a 2023 release. However, the specific date has yet to be revealed by the studio.

Solo Leveling’s main character is a Hunter named Seong Jin-Woo. He was the weakest among his fellow Hunters until he woke up one day with a new ability. Seong Jin-Woo can suddenly see a HUD as if he was in an RPG, which displayed quests that leveled him up when he accomplished them.

As another world-renowned success, Demon Slayer is confirmed to return for the Swordsmith Village arc. Ufotable will also animate the upcoming season, so expect more dazzling animation from them. Even though a new season has been confirmed, the release date is yet to be announced.

KonoSuba is also one of the more famous isekai anime out there. After the previous season ended in 2017, it’s finally returning for another season. Even though there’s speculation that it’ll be released in 2023, its animation studio, Drive, hasn’t announced an official release date.

Season 3 will likely cover Volume 6 of the light novel, where it’ll continue to follow Kazuma’s group as they try to resolve a conspiracy regarding the king and the princess. It might also include shocking developments with Darkness if it covers Volume 7.

Another well-known anime making a return is One Punch Man. After three years, One Punch Man Season 3 has officially been confirmed, but the release date is unknown. Moreover, it’s unclear which studio will animate the third season due to the backlash J.C. Staff received.

Fans have been waiting for Tower of God: Season 2 since the previous season ended in 2020. Thankfully, it’s now confirmed that Tower of God will return for another season. However, the release date and animation studio are unclear, so we’ll update this when an announcement is made.

Many people say that Season 2 won’t leave you disappointed. As it adapts Part Two of the manhwa, it’ll follow Baam joining Ja Wangnan’s group, hoping to ascend up the tower after a surprising 6-year time skip.

To clear things up, this Uzumaki isn’t related to Naruto Uzumaki. Uzumaki is another horror anime that’s anticipated by fans of Junji Ito. It was set to be released in 2020, but the anime was delayed because of COVID.

Uzumaki follows a high-schooler named Kirie Goshima and her boyfriend, Shuichi Saito. Both of them live in a mysterious cursed town where horrific disturbances occur. Together, they must uncover the horrors to save their hometown.

READ NEXT: Biggest New Fighting Games Of 2023 & Beyond