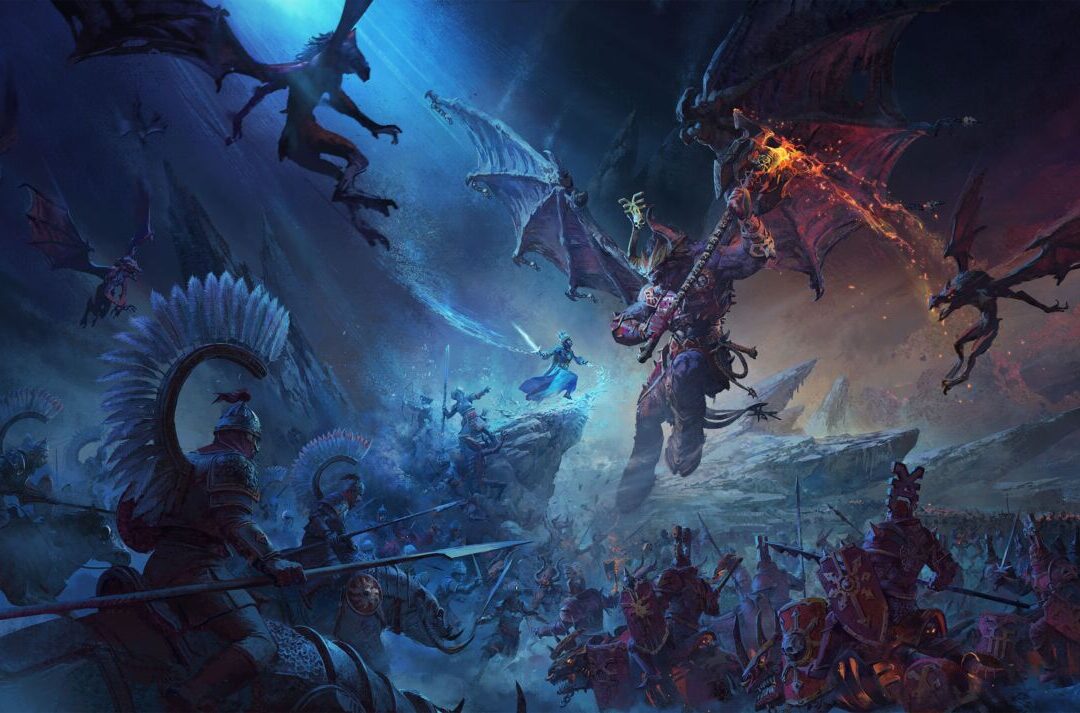 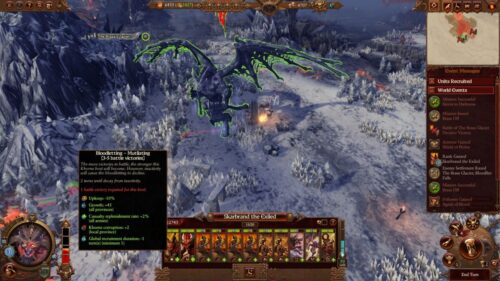 Total War: Warhammer 3 is the hotly anticipated conclusion to Creative Assembly’s first foray into fantasy strategy gaming for their flagship Total War franchise. It looked poised to respond to many concerns of the previous two installments while delivering a suitably epic narrative and satisfying debut of the big bads of the Warhammer world, the four Chaos Gods and their followers. So, does Warhammer 3 please the Dark Gods or does it get lost in the Realms of Chaos?

Of all the Warhammer games CA has made, Warhammer 3 is the most narratively rich and focused where each faction attempts to harness the power of a dying god for their own ends. This directly pits each faction against each other in a desperate race against time, made all the more compelling with dangerous excursions into the suitably crazy Realms of Chaos in order to progress the story. Structuring the campaign as an active race is a marked improvement over Warhammer 2’s Vortex Campaign, which was much too passive in its design and offered players few tools with which to interact with their competition, aside from direct military action.

Presentation-wise, Warhammer 3 mostly knocks it out of the park in both the audio and visual departments. It isn’t without its visual bugs and ugly textures that break some immersion, but ironically on the flipside, these bugs make sense given the context of reality-bending Chaos bleeding into the realms of mortals. The UI is quite packed, but well-organized and players familiar with the series will immediately feel at home with the game’s controls and layout.

Total War: Warhammer 3 has a number of standout systems and improvements that make it the definitive experience of this trilogy of games. Undoubtedly the game’s first major highlight is the faction design both in the campaign and in battle, with the Ogre Kingdoms and the debut of Grand Cathay being especially of note. Credit to Games Workshop’s ability to envision all these factions, but also commendations for CA in bringing the peoples of the Warhammer world to life.

One of the more underrated improvements to Total War’s suite of strategic options is diplomacy. The addition of a deal tracker number in the diplomacy screen and the trade settlement option are nice and all, but what really stands out is the added Allegiance system that makes allies far more useful and easier to work with to coordinate your war effort. Players will now earn diplomatic resources, which they can use to request units and armies from their allies, more actively involving players in caring for their allies, as well as providing additional utility from forming said alliances.

One of the biggest criticisms of the previous two Warhammer titles was the poor implementation of minor settlement battles and sieges. Luckily, CA took the effort to massively overhaul sieges, giving us massive minor settlement layouts and expanding city battlefields, while still retaining the one-direction-of-assault wall setup. Sieges and urban combat are far more engaging and involved affairs, especially the massively expanded deployables system that lets players build defences, even during battle, and plan out desperate last stands to fend off invaders.

Coupled with the improvements to sieges are significant improvements to AI behavior and tactical decision-making. I was surprised to see the AI making player-like decisions, such as moving defenders away from encroaching ranged units or focusing fire on important characters. It isn’t perfect by any means, as in sieges the AI can still freak out and lose all semblance of coordinated thought, and sometimes it will even march its units straight through your own. On the whole, though, CA seems to finally be investing resources in improving their chronically poor AI.

The final standout feature in Warhammer 3 is its enhanced multiplayer mode. The new Domination mode adds a map control mode on top of the standard meeting engagement battles with a unique reinforcement system. Altogether, this mode feels closer to the tabletop miniatures wargame experience, which should make Warhammer veterans especially happy.

More notably though, CA finally expanded multiplayer campaigns from a maximum of two players to a total of eight per campaign. This development has been a long-time coming and now you can play with a group of friends to see who is the true master of Total War. In addition, for quicker games or smaller parties of players, CA has included several smaller scenarios, adding more choice and gameplay options for the game’s longevity.

Despite Warhammer 3’s clear strengths and gameplay improvements, there are a number of overarching issues and concerns that keep it from true greatness. The first set of issues is the pervasive feature stripping and frustrating feature compartmentalization, the latter of which negatively affected Total War’s previous offering, A Total War Saga: Troy.

While the addition of the new Domination mode provides exciting opportunities for multiplayer, it took CA 11 years to bring it back from Shogun 2 and build upon it. This further raises questions as to why Shogun 2’s series revolutionary multiplayer system, Avatar Conquest, hasn’t been adapted and built upon for the Warhammer setting. This is a huge missed opportunity.

Feature stripping also pervades faction design. Take the Daemons of Chaos and their expansive Daemon Prince body part system, for example. While the devs added an interesting feature, they took away ancillaries and followers completely for the Daemon Prince, something that all other characters, even in the same faction, have and has little narrative, lore, or even strategic reason to be absent.

CA’s choice to focus strategic features to specific factions limits their overall impact on Warhammer 3’s strategic depth. For example, Cathay has a caravan mechanic that lets players actively participate and invest in trade by sending expeditions to faraway cities to earn a profit. This is an excellent baseline for deeper economic gameplay for all factions across the entire Warhammer world, especially those that focus on trade, such as the Eastern European-inspired Kislev, yet puzzlingly only Cathay has access to the more economically compelling feature.

This feature pigeonholing makes the Total War: Warhammer trilogy more of an adventure-strategy game than an empire builder-manager game that most historical Total Wars were. This approach definitely has advantages in that replayability, at least on paper, and faction variety is high and characters have greater strategic campaign and tactical battlefield impact. Additionally, adventure-strategy is great for creating a power fantasy type game, where the player is meant to feel powerful and rewarded even at the expense of balance and the world’s own logic and depth.

The flipside of this design approach is that the Warhammer economic system is linear and shallow, replayability can suffer, and decision-making can lose meaning. Once you’ve experienced the highs of the ultimate power fantasy by stomping the AI that still cheats on higher difficulties, there’s little incentive to do it all over again.

Once the player inevitably reaches a snowball state, the game loses all challenge and strategic decision-making becomes meaningless. While the initial effort to reach that state can be initially rewarding, Warhammer 3 provides little beyond that point to challenge the player. Luckily, the game’s narrative wraps up right around the point where the game can become meaningless.

The final issue that contextualizes all the previous concerns is that despite the excellent graphics and shiny coat of paint, Total War’s engine is showing its age. Just like Stronghold: Warlords and Combat Mission: Cold War, Warhammer 3’s engine feels like it’s locked the devs into a corner with its outdated toolbox.

Taking all the mechanical changes and feature additions over the years, Warhammer 3 at its core and in broad strokes still looks, feels, behaves, and plays like Empire: Total War, a game from 2009. As a result, there are some oddities and frustrating limitations that blunt Warhammer 3’s lofty ambitions, most notably in balance and use of geography. Taking multiplayer aside, ranged units in Warhammer 3 are on the whole exceedingly powerful, even the lowliest archer units. While it’s obviously challenging to balance the power of units of different technological levels in a fantasy world, the way ranged damage is calculated, the way armor works, and how ranged weapons behave all make melee units far less viable when composing armies.

In regard to geography and map limitations, the Warhammer world has some crazy cities and wondrous architecture, with floating castles and islands, majestic castles, and twisted lands of Chaos populating Total War’s battlefields, but players can rarely if ever fully, utilize the fantastical. For example, instead of utilizing the Great Bastion’s mighty wall to aid in the defence of the various gatehouses, players can only place units on the walls and barricades that are of a perfectly convenient height for every faction to scale. This pokes holes in the world’s immersion, feels arbitrary, and limits the awesome potential for tactical combat in a rich fantasy setting.

From a technical standpoint, Warhammer 3 is mostly absent of problems with a solid options menu that could do with a few more UI customization features and smooth performance across the board. If your setup meets recommended specifications, you should be able to run Warhammer 3 with little issue.

I did encounter a number of gameplay bugs, though. Single entity flying units can sometimes get stuck in an in-between landing and flying state, which prevents them from attacking their target. In addition, some campaign load-in screens can lock up and occasionally technology effects don’t activate or trigger once the tech completes research.

Altogether, Total War: Warhammer 3 is a solid, albeit safe conclusion to the Total War: Warhammer trilogy that improves on the series’ biggest concerns. From a narrative standpoint, Warhammer 3 definitely feels tighter and more engaging than any in the trilogy, with decent replayability that will pit factions against each other as they vie for the power of a god.

However, Warhammer 3 also shows deep-rooted issues related to its engine and design choices, which does raise questions about how Total War truly innovates in the future. As it currently stands though, Total War: Warhammer 3 is a solid fantasy strategy game, especially for any fan of the setting and those interested in competitive multiplayer. 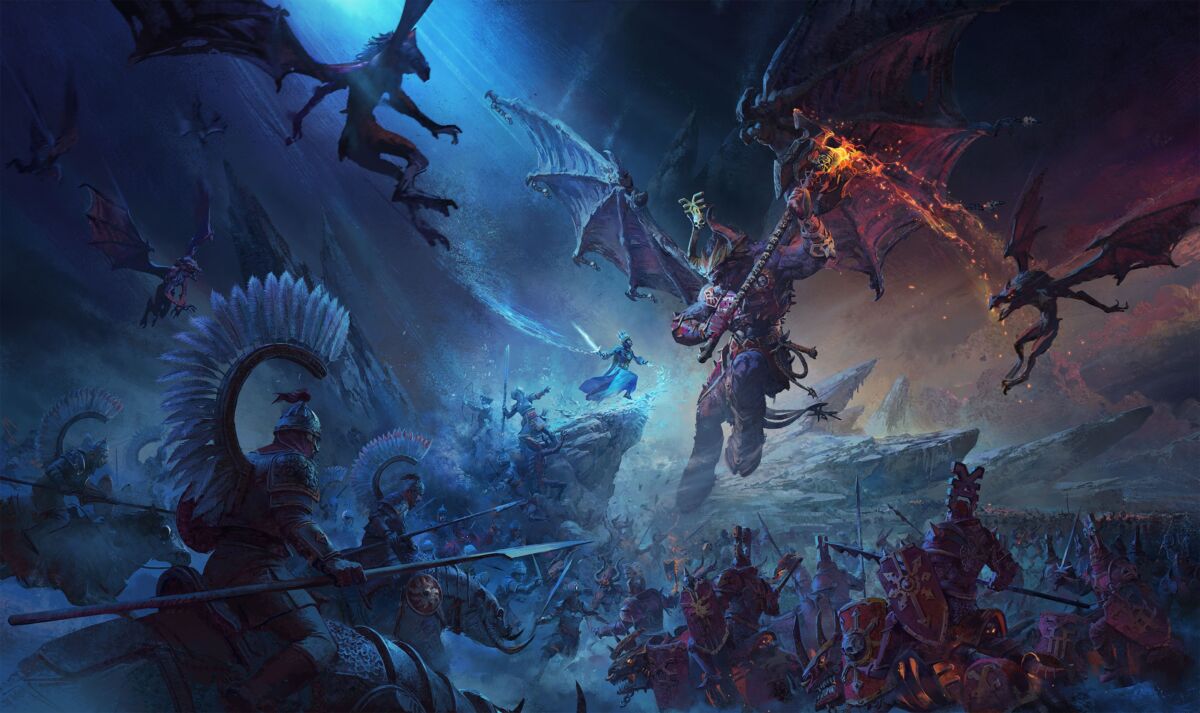 Verdict
Though it may show the design limitations of the franchise’s aging engine, Total War: Warhammer 3 is a solid conclusion to CA’s foray into fantasy.
7.5
Cultured Vultures is a pop culture website established in 2013 covering all things gaming, movies, and more. We eat your words.
All The News On The Biggest Games