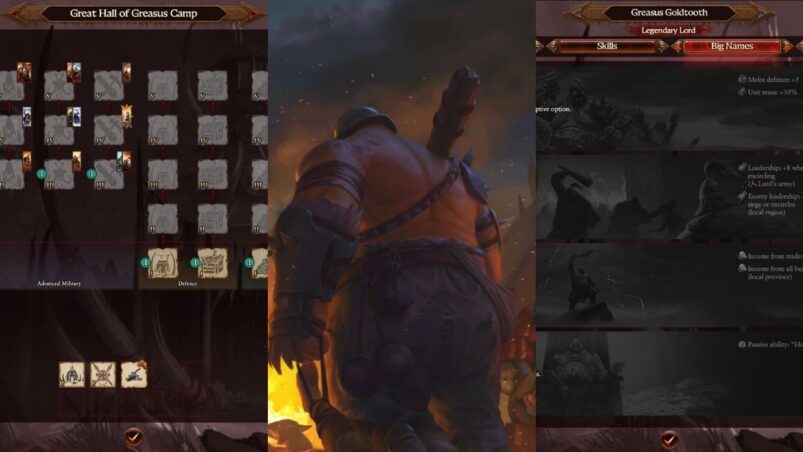 Amidst the grand conflicts of mortals and daemons in Total War: Warhammer 3, there are still simple folk who want just one thing – to have a good time drinking, eating, and raiding. The Ogre Kingdoms are these simple folk and they make their home in the Mountains of Mourn, bordering Grand Cathay and giving every Caravan Master a headache and a fright. So how do they play then?

Here are the main features of the Ogre Kingdoms in Total War: Warhammer 3:

And here’s everything you need to know about the Ogres.

Ogre Kingdoms, just like all other factions, can settle established cities, but Ogre settlements are weaker and provide fewer options of development in comparison to more established empires or even Chaos. However, Ogres trade conventional construction for mobility and the ability to establish bases anywhere they wish.

Ogre factions for a sum of gold can have their lords place a camp. This camp will now act as a base of operations, which can build a huge variety of buildings, though it will require population, as well as gold to build most structures.

Camps function similarly to settlements in that they will provide replenishment, income, and a safe haven for damaged armies to hide in. There’s a limit of camps that can be deployed, which can be increased through technology and character abilities, so it’s vital to choose camp positions wisely, and ensure they have a solid garrison army recruited.

Ogres themselves are all about meat. It’s their life’s mission to get rich and eat every type of meat out there in honor of their deity – the Great Maw.

This love for meat manifests as an army specific resource where Ogre armies are not only maintained with gold, but meat as well. Each army will have a set amount of meat that can increase by being in a friendly region, which produces meat or a camp that can replenish the meat supplies of the given Ogre army. The bigger the Ogre army, the more meat they’ll consume, so it’s crucial to fight battles, raid and sack settlements, and process captives into meat to keep armies operating in the field.

Throughout the Warhammer world, Ogres are known to be excellent mercenaries as they travel the world in search of enrichment, while holding no particular loyalties – as long as they are well-fed and compensated. As such, playing as any Ogre faction, players can expect to be offered contracts of various kinds, usually eliminating specific targets, for a set amount of money. This can be a great way to enrich your faction and invest in greater raiding expeditions.

Ogres are definitely not the most subtle in their exploits and it’s important to them that everyone knows of their exploits. The biggest and baddest of the Ogres are especially concerned with outtitling their brethren to show who’s the greatest and gutsiest Ogre in town.

All Lords and Heroes have a section in their stat sheet called Big Names – a list of titles that can transfer temporary bonuses to the hero when activated. Each title requires the player to complete a specific action to unlock a title for use. All these titles are randomized, except for Legendary Lords.

The Ogre army is brutally simple – aside from some expendable Gnoblar chaff, the entire roster is composed solely of monstrous infantry, monstrous cavalry, war machines, and monsters. Though Ogres do have a couple of ranged units, including some funky artillery pieces, like the scraplauncher or ironblaster, they definitely prefer to get up close and personal with unexpectedly swift maneuvers and thunderous charges from the multitude of cavalry options they have.

Being such big targets and lacking in much heavy armor, Ogres are quite vulnerable to ranged fire of all sorts, be it prickly arrows or long-range artillery, even in close-quarters as they tower over most humanoid factions. This dynamic means that speed, use of terrain, and cunning tactics are crucial to keep Ogre troops healthy and combat effective, so healthy mix of an infantry line and a force of cavalry and monsters should ensure that your army has the ability to reposition, close the distance, and threaten weak spots at a moments notice.

The Ogres are perhaps the most liberating faction to play, as they don’t have grand designs of empires that will stand the test of time, nor do they care much for the existential threat of Chaos. As long as they get to eat, drink, clobber, get rich, and be merry, they’re perfectly content raiding caravans, selling their services of butchering, and bellowing loudly in their friends’ face. So, what can you make of this lot of Ogres?