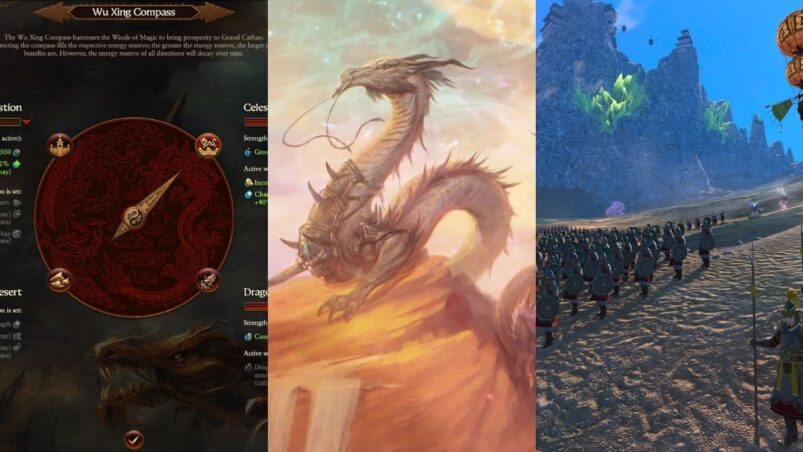 Along with Kislev, Grand Cathay stands against the tides of Chaos to save the mortal races from Chaos’ corruption in Total War: Warhammer 3. This is also the first time it makes its fleshed-out debut appearance in the Warhammer franchise, so let’s take you through what this faction has to offer.

Here are the main features of Grand Cathay’s faction in Total War: Warhammer 3:

And here’s everything you need to know about Grand Cathay.

Harmony is Cathay’s dominating system that pervades both the faction’s strategic and tactical gameplay. The grand strategic goal to Cathay’s success is to maintain a balance between Yin and Yang, two major philosophical and magical doctrines within Cathayan society.

All lords, heroes, most buildings, and most technologies are associated with either Yin or Yang. When players recruit, build, or research these items the empire-wide Harmony rating will shift towards Yin or Yang.

If Harmony leans towards the other, buildings of the dominant system will benefit more, but the opposite side will suffer penalties. However, if players have an equal amount of Yin and Yang, the empire will benefit from being in perfect Harmony and the player will enjoy the optimal level of benefit to all facets of their empire.

In the capital city of Wei Jin, the Celestial Dragon Emperor and Empress have constructed a massive magical device, the Wu Xing Compass, a contraption that can guide the Winds of Magic to empower parts of Grand Cathay’s empire. The player can set the direction of the compass every ten turns with technologies reducing the cooldown.

There are four directions to set: The Great Bastion, Warpstone Desert, Celestial Lake, and the Dragon Emperor’s Wrath. The Great Bastion direction will increase replenishment, reduce recruitment costs, add defensive supplies in sieges, grant a battlefield ability, and reduce the threat level from mobilizing Chaos armies beyond the Bastion.

The Warpstone Desert direction is the only one without a power-up function. Set here, the compass will reduce corruption from all sources, reduce Winds of magic over time, and reduce enemy troop leadership.

The Dragon Emperor’s Wrath direction will improve public order and when fully charged, allow for the activation of an ability that causes significant attrition to armies beyond the Great Bastion – a great way to reduce the threat from the endless hordes of raiders.

While Cathay may be isolated in its own corner of the world, it does have an economic lifeline to the factions in the West, beyond the Mountains of Mourn and the Darklands, called the Ivory Road. It’s a perilous path, but certainly lucrative for well-prepared and well-stocked expeditions.

Players can recruit dedicated Caravan Master lords that bring their own armies, based on their lord trait, and will lead the caravan expedition. These brave characters have their own skill tree and can be equipped with items and followers, just like any other lord.

When you’re ready to send an expedition, click on the caravan button, then in the new menu click on the desired Caravan Master to lead, set the amount of cargo the caravan should bring, and then set the destination city. The expected revenue will be displayed next to the target location based on the amount of cargo you initially dispatch with. Generally, there’s little reason not to fully stock the caravan with cargo, unless your faction doesn’t quite have the money to afford an expensive expedition.

Lords of Cathay won’t need to manually move the caravan, as it will move independently at the end of every turn. There is a chance though that the caravan may encounter raiders or some other event along their journey and players will need to be ready to fight or respond to whatever the caravan encounters. These events can include paying off bandits, recruiting mercenaries, or finding some additional cargo.

Just like Cathay’s empire looks for harmonic synergy in its society and infrastructure, Cathay’s forces also benefit from the Harmony system. All units have a Yin or Yang rating, which doesn’t affect the strategic balance in Harmony, with Yin units typically focusing on ranged fire, whereas Yang troops focusing on close-quarters engagements.

When units of opposite ratings deploy nearby they will mutually increase each other’s stats, such as leadership, melee defense for Yang units, and reload skill for Yin units. This tactical harmony incentivizes formation, discipline, and positioning to maximize the performance of Cathay armies.

Cathay’s armies are slow, but quite well-armored and bristling with a variety of ranged weaponry, including crossbows, long-range jezails, heavy cannons, and even rocket launchers. The tactical approach to this army is to have a sturdy line of infantry and terracotta sentinels to hold off the enemy, while the rest of the incredible ranged arsenal does all the damage. Cathay does have a smattering of mobile cavalry forces, such Jade Lancers and Great Longma Riders, but this is definitely the least-developed of Cathay’s army and should only be considered in a minor support role.

Grand Cathay is a flavorful and colorful addition to Warhammer’s world that provides a unique strategic experience that involves both defensive play and risky expeditions. How will you ensure Cathay’s greatness?

READ NEXT: 10 Most Underrated Strategy Games Of All Time