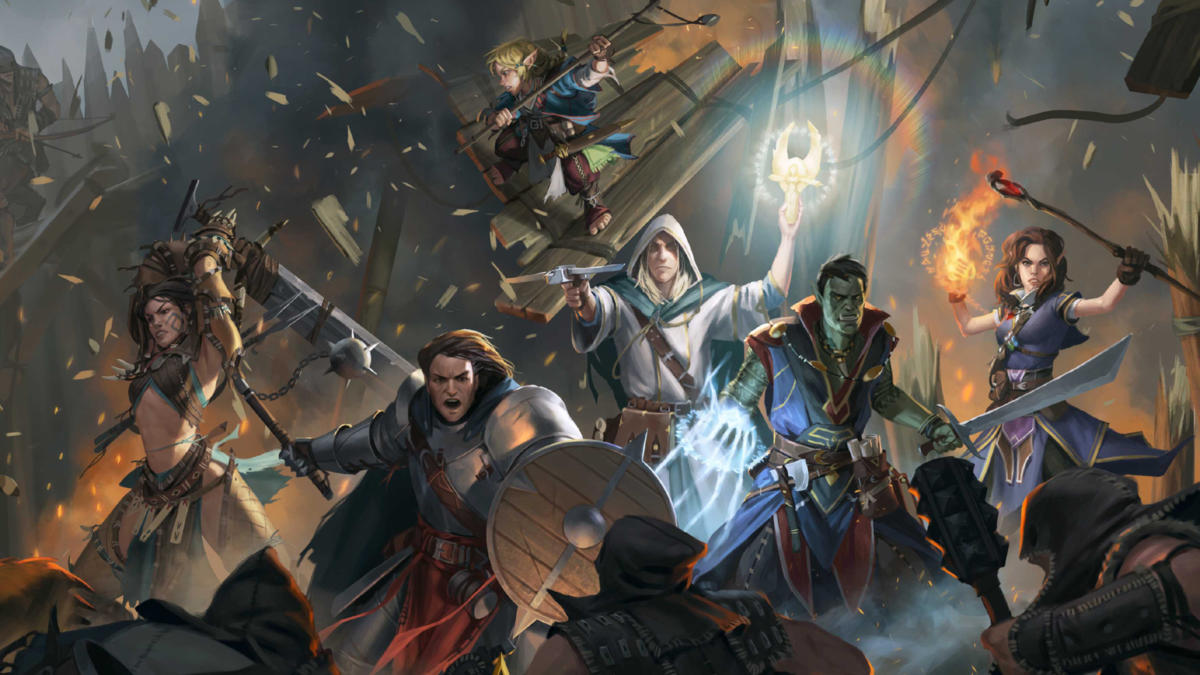 At first, Pathfinder: Kingmaker is painfully familiar: it is top-down, pause and play, starts out with a school being attacked at night and I thought it could not be more generic. But, little by little, Pathfinder’s charms won me over and if there is one word I would use to describe the game, it would be pleasant. From the tabletop inspired overworld map to the music and the art and graphics, there is just a wholesome feeling of pleasantness about this game.

Most of the game you will spend traveling with your party of up to five characters, doing more or less the things you are used to doing in these sorts of games. Go to locations, kill monsters, talk to locals and hunt for treasure. This would be all fine and good, but what makes Pathfinder stand out among all the other isometric CRPGs is all the extra layers that are put on top of it. 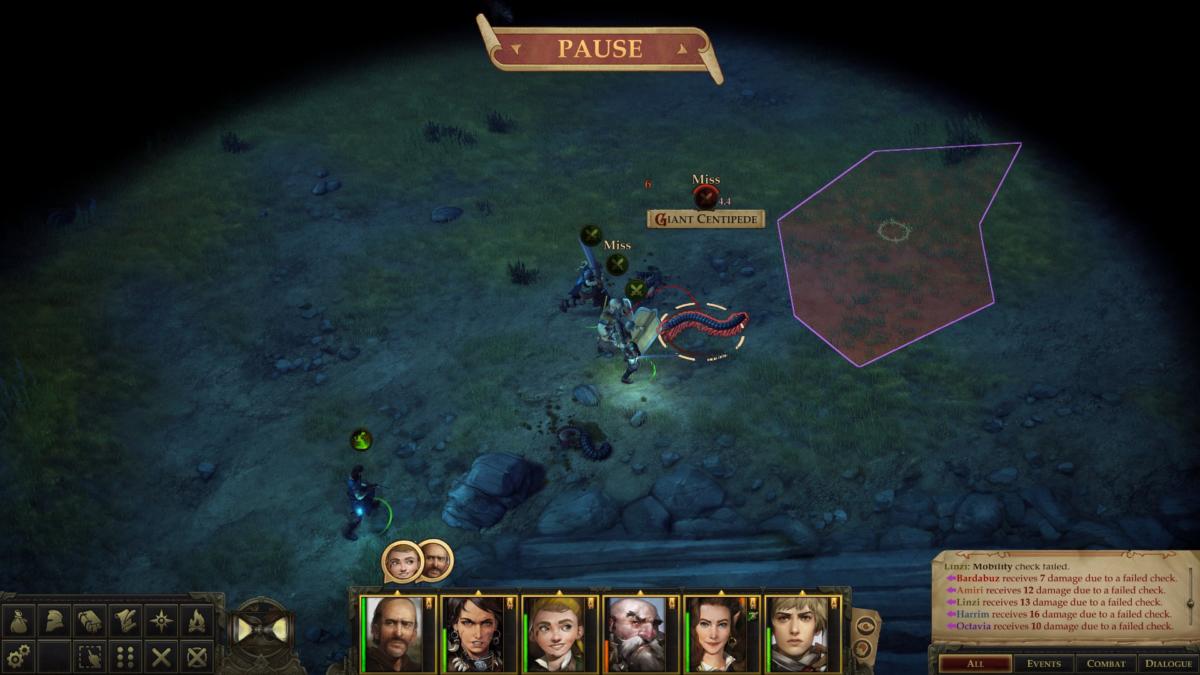 Fatigue and resting play a large role, not least since the Dungeons & Dragons rules are used which requires resting between uses of spells and abilities but also because you need to sleep or suffer some really heavy penalties to your stats. Resting is not a mere button push either, you need to set up a camp and assign roles, if you’re out in the wild you can hunt for rations, hide the camp, cook food and appoint guards to mitigate risks of being ambushed. If you’re in a dungeon, you can’t hunt and have to rely on your rations instead. It’s a neat little system that forces you to think and plan ahead a bit more than before.

The other big part of the game that comes into play after the first big quest is the kingdom management aspect. Once you are on the throne, there is a whole slew of new mechanics to contend with. On its surface you could describe it as the inquisitor mechanics in Dragon Age: Inquisition only a lot more involved and better executed and manages to capture the feeling a lot like running a kingdom a lot better. You appoint advisors, deal with dignitaries, create settlements and build them up. The kingdom works as a character and has stats and bonuses that level up as you expand, rebuild and solve quests. While a lot in the kingdom can be solved by sending your emissaries and relying on your companions, many things also require your direct attention and that is what constitutes the story quests and side quests in the game from this point on. It all works very well and make you feel like a baron or a king managing a small kingdom, which is unique in a CRPG. 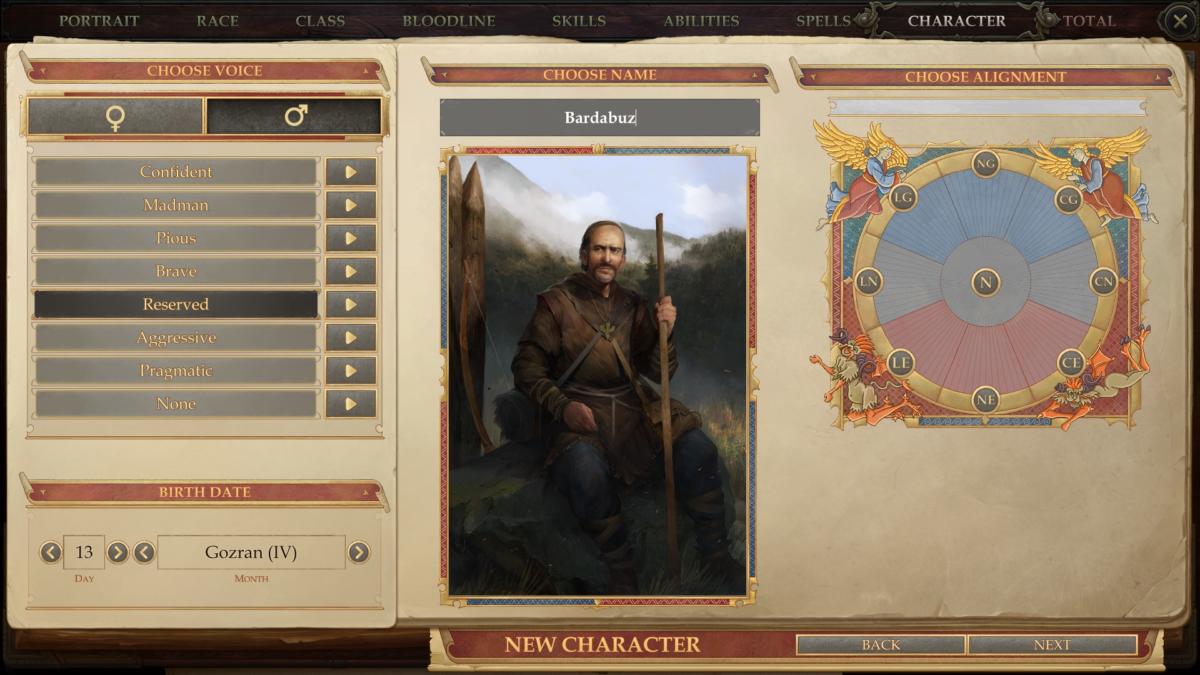 While other CRPGs, like Obsidian’s Pillars of Eternity and Tyranny, have opted to do away with the old dice rolls and pen and paper mechanics, Pathfinder proudly puts them front and center and digs down on them. Stat checks, saving throws and dialogue options all come with a roll of the dice, whose results are fully viewable, so you can see by just how little you lost that athletics check to climb a wall. While relying too much on such mechanics runs the risk of making a game clunky or disjointed, Pathfinder manages to make it work splendidly and is one of the few CRPGs that evokes what is fun about playing pen and paper games with a good Game Master (basically the narrator and rules master). Like the GM in my game sessions telling us that, no you can’t go hunting three levels down in an ancient crypt. Many times, I try to do something, and the game gently pushes back, just like a good GM would do.

For instance, one of the first random encounters I had was with a group of slave traders, who wanted one of my party members as a slave. I could give them one, but I refused. In the ensuing battle, my fighter went down whereupon the slavers again offered to take the fallen hero and be on their way instead of killing us all. I could have refused again but the fighter in question said it was ok and I should seek her out and save her later when we are stronger and more prepared. I let them take her and thus initiated a short and interesting side quest which had me track down the slavers, beef up my party and then assault their camp at night. It felt dynamic and very satisfying, not the least because my fighter actually had something to say in the matter and I didn’t rule as an iron-fisted dictator. But it is this pushback on the player, without just denying things, that feels like playing with a GM trying to reign in its players a bit. 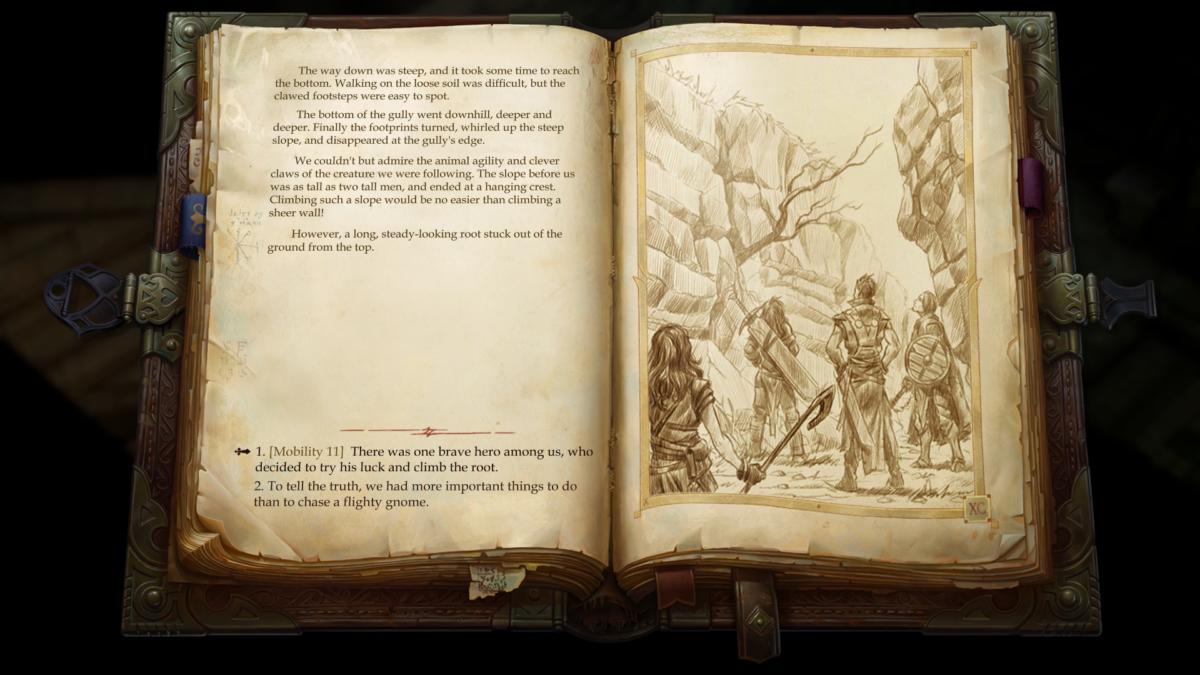 The story is pretty simple and straightforward. There is some contested land and you and your group are sent out to basically clear it and make it your own kingdom. For as generic as the intro is, the ending to that sequence was rather interesting. One of the companions during the intro straight up stabs you in the back and tries to pin everything that has happened on you (including actions that he advised you to take) and instantly you start hating the little blighter and it sets up a really good antagonist for the early game. This, together with genuinely interesting character stories, propels you through the game and makes the many, many hours of gameplay fly by.

Graphically, the game was also initially a bit bland and I thought everything looked too plain and low poly, especially compared with Divinity: Original Sin 2. Though yet again, it ended up growing on me. The areas are filled with little details, like grass moving in the wind or by snakes and rabbits moving through it, and Pathfinder has some really impressive weather effects lighting; thunderstorms are especially impressive in this game. It won’t win any graphics contests, but again, it is very pleasing to look at. 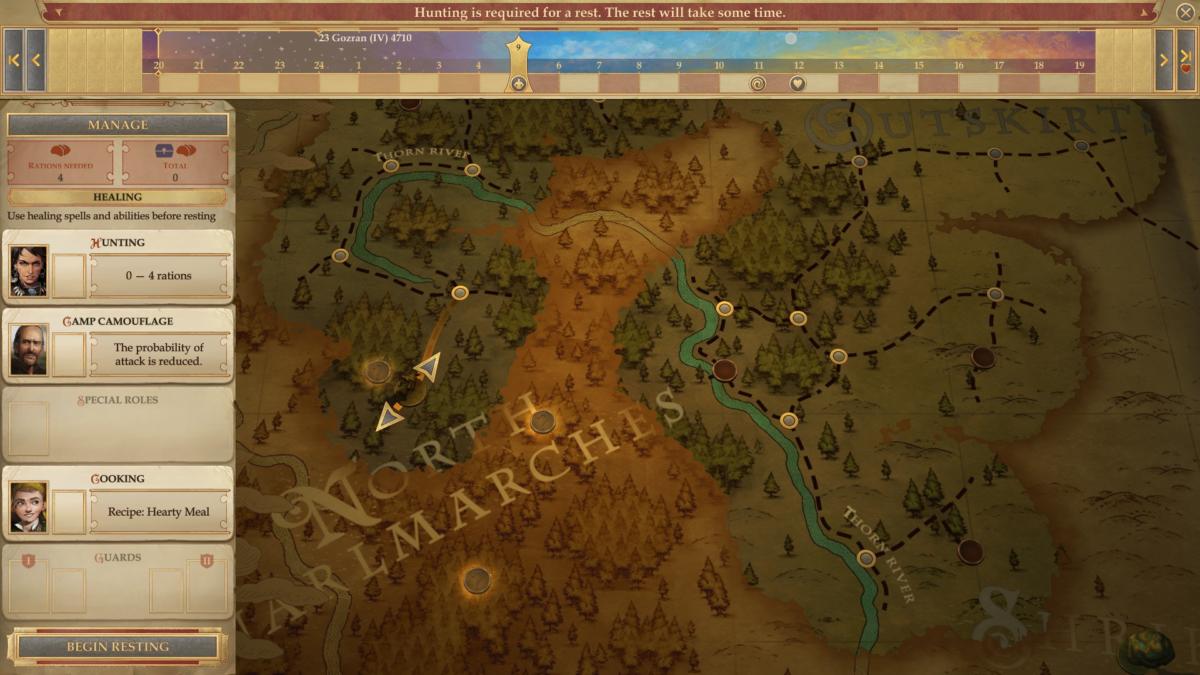 Technically, the game does have some issues. Nothing too serious, but I have had character portraits being doubled and some textures being stretched out and the loading times can be pretty long at times. Another issue is that if you are not used to these kinds of games, it can be a lot to take in at first. To the game’s credit, there are many difficulty settings you can fiddle with. Like if characters are resurrected after a fight or you need a priest to do it, how much damage enemies do, the difficulty of the kingdom management and many other things. Even so, if you are not sure what these things do in the first place, it will nonetheless feel overwhelming. It is clearly made for fans of the genre, but I do think that new players can enjoy it as well if they take the plunge and can stand a few confusing hours in the beginning.

Pathfinder: Kingmaker is an awesome game that furthers the depths of CRPGs. It has some mechanical clunkiness and has a bit of a learning curve if you are unfamiliar with Dungeons & Dragons. However, almost all of its systems end up working well and serve to make the game feel deeper and richer than many of its competitors.

Verdict
Pathfinder: Kingmaker is an excellent game that successfully marries the best aspects of pen and paper RPGs with great exploration and a surprisingly good kingdom management game. Microtransactions: none
9