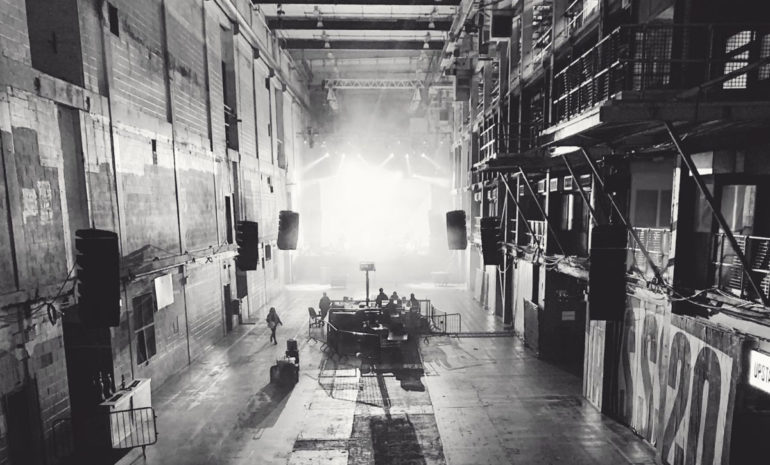 You know that a band is busy when they release a whole new album whilst still touring their previous one. Tycho have just wrapped up a huge European tour of their last album, Weather, and on the eve of their final show at Printworks in London, Simulcast dropped.

The latter is intended as a companion piece to the former, with a lot of similar soundscapes but minus the potent, warm lyrics that Saint Sinner provided on Weather. Many of the tracks on Simulcast are reworkings of tracks from Weather, and some are even duplicated across both, and Tycho (band or simply brainchild project of Scott Hansen, depending who you ask) have been peppering this new material into their setlist more or less since the tour began back at the start of February.

Printworks could not have been a more fitting final destination for the chilled, electronic US outfit, a vast, cavernous former printing press in south east London which has played host to countless club nights, gigs and one day festivals, as well as portraying the Death Star for Secret Cinema and even being used for a scene in Avengers: Age of Ultron.

Hansen has a background in AV, and brings this approach to all Tycho shows, in this instance arriving on stage backed by a huge sheet upon which a reel of accompanying visuals played across the varied setlist, complimented by Printworks’ huge, complex lighting rig. Seeing Tycho live is always a humbling experience, and in the time since I last scouted one of their shows for CV, they’ve refined their sound and their visuals into something which manages to walk that difficult line of being relaxing and serene, yet deeply energising in a live setting. Think of it like a swim in the ocean, you’ll feel at peace, but you’ll still be exhausting when you return to land.

Around halfway through the performance, Saint Sinner was welcomed onto the stage and performed a series of tracks from Weather including Japan and For How Long. Fan favourite No Stress was kept back until the encore. Happily plenty of material from their original triptych of releases – Dive, Awake and Epoch – were also included, fitting seamlessly in with the new material and neatly asserting that Tycho have created a benchmark for themselves, and continue to create beautiful, involving music by adhering to it.