REVIEW: The Avengers: Age of Ultron 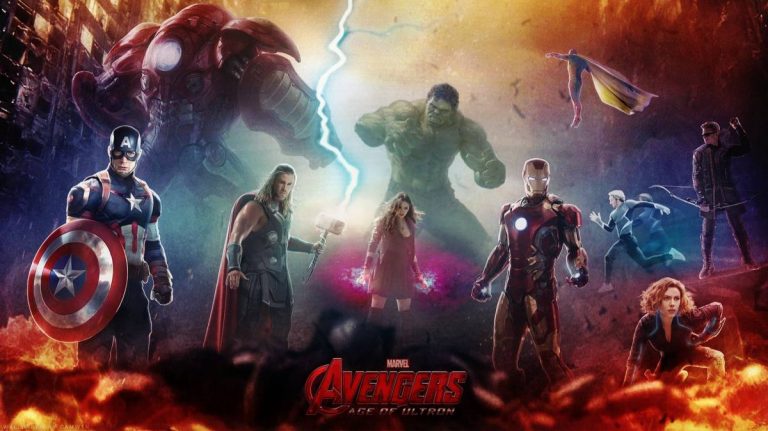 In 2012, The Avengers assembled, saved the world and took the cinematic universe by storm. In ‘Avengers: Age Of Ultron’, they re-unite to combat a new enemy.

Ultron (James Spader), is the product of a failed global security project devised by Tony Stark (Robert Downey Jr.) and created with help from Bruce Banner (Mark Ruffalo). Unfortunately for us, the mission statement is apparently not clear enough because Ultron quickly decides that the best way to secure the continuing safety of the planet is to annihilate humanity. The Avengers must unite once again to put a stop to the deranged cyborg’s plans.
d
The film starts with a bang as we’re dropped straight into the middle of the first of many spectacular action sequences. It looks amazing, as is to be expected. With writer and director Joss Whedon once again at the helm, there is no shortage of slick action, smart dialogue and well choreographed violence. All of which is beautifully captured with seemingly unbridled, free-roaming cinematography. I watched in 3D and I would recommend everyone do the same, not just for the action sequences, but for what I consider the best use of 3D in the whole film – The scene where Stark and Banner puzzle over the creation of Ultron and generally do science things in a computer lab filled with colourful projected holographic tech-stuff. You’ll know what I mean when you see it.
d

One worry that people seemed to have going in was that this would be a carbon-copy of the previous installment. Fortunately, this is not the case. That’s not to say that ‘Age Of Ultron‘ doesn’t conform with the Marvel Universe’s (MU) well-established formula; it does. This is nothing groundbreaking. If you’ve seen a few of the films that lead up to this one, you have an idea of what to expect. That said, this film has a very different feel to that of its predecessor. It feels heavier, somehow. With the universe that Marvel has created so far, they have fallen into a pattern that most fans have noticed. If you care about a character, they’ll probably be fine. This ain’t Game Of Thrones. With this latest installment of the universe however, things feel different. It doesn’t seem as safe and, at times, I genuinely found myself wondering whether everyone was going to be left standing by the time the credits rolled.

Speaking of everybody, let’s talk about character progression. I won’t say there is none, because there is some… sort of.

Tony Stark still seems to be showing signs of the instability that was plaguing him in ‘Iron Man 3‘ largely due to his terrifying experience at the end of ‘The Avengers‘. His consuming feelings of personal responsibility for the safety of the planet are also evidenced. They lose some impact though, as they seem to come and go as required by the script. One minute he’s got the world on his shoulders, the next he’s wise-cracking over cocktails. We get an idea of the ideological differences between Stark and Captain America (Chris Evans) that will lead to the conflict that ultimately kicks off in one of Marvel’s most anticipated future ventures: ‘Captain America: Civil War’. However, these conflicts also seem to disappear before the end of the film.

Captain America himself shows no growth. He actually seems to have regressed since the last time we saw him in ‘Captain America: Winter Soldier’. Gone are the complex morality issues, back is the all-American boyscout.

Thor is Thor and, to be honest, I’m okay with that. Thor has always been the most two-dimensional major character in the MU and he seems to exist in the Avengers to serve as comic relief, master of exposition and literal deus-ex-machina.

We are treated to a romantic sub-plot involving Bruce Banner and Natasha Romanoff/Black Widow (Scarlett Johansson) that is actually sort of interesting. Banner, still struggling to come to terms with the duality that exists inside him, now has to decide if he can allow another person into his life. We also get a glimpse into Romanoff’s secret past and we are given an idea of how she became the Black Widow all the while she seems intent on giving up the assassin’s lifestyle.

Of all the original Avengers, it is Hawkeye who gets the best character treatment. We see a very human side to him. The criticisms of the futility of his character in the first film are faced head-on. We learn a lot more about him and come to appreciate that, though he is just a man surrounded by gods and monsters, he has his own motivations and he is an important member of the team. I actually felt bad for my own previous criticisms of his character. Hawkeye, you have my sincere apologies. 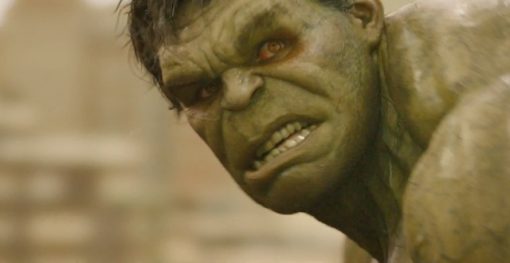 The Maximoff twins, Quicksilver (Aaron Taylor-Johnson) and Scarlet Witch (Elizabeth Olson) are both interesting and welcome additions to the MU, and any comic fan would tell you how great it is to see Vision (Paul Bettany) brought to life on the big screen. Vision, a crimson faced synthezoid created by Ultron and brought to life by the Avengers using the simulated brain power of Jarvis, Tony Stark’s virtual butler, comes close to stealing the show in the third act.

Which brings us to Ultron. Ultron is realised on screen as a towering humanoid robot. He certainly looks imposing and James Spader’s incomparable voice is perfect for the menacing mechanoid. Despite this, he never really hits any kind of stride and never quite feels like a real threat. There are moments (again, largely due to Spader’s performance) where Ultron comes across as frightening. His occasional, chilling recitation of lyrics from the ‘Pinocchio’ song ‘I’ve Got No Strings’ is haunting. As are some of his better lines, most of which appeared in the trailer. Then he makes jokes that don’t seem to fit his character and the sinister effect gets lost.

[Tweet “”I don’t need gritty realism. I want to be awestruck.””]

Like many of the main characters, Ultron suffers because of the script. It seems like Whedon lost some sense of who the characters are; where they’ve been and where they’re going. I hardly consider it surprising that something like this would happen considering Whedon’s admissions to the press that this film had left him exhausted and that it was the hardest work he’d ever done. It’s understandable that he will not be returning for the next installment of the series.

Despite its shortcomings in these areas, I really enjoyed the film. It was a pleasure to watch. The locations are new and interesting, particularly the Wakanda scenes shot in South Africa which provides the backdrop to the excellent Hulkbuster scene, in which Iron Man dons an extra-large version of his usual armour in order to restrain a rampaging Hulk.

The final showdown somehow manages to attain an even grander sense of scale than the decimation of New York in the first film. Admittedly, it has the same problem as its predecessor in that the heroes are assaulted by wave after wave of generic cannon-fodder… and shield-fodder/ hammer-fodder/arrow-fodder/Hulk-Smash-fodder… In ‘The Avengers‘ it was the mysterious Chitauri; here it is robots. Hundreds of flying robots, each an extension of Ultron’s virtual mind. It could be considered lazy film-making, but while I was watching the Avengers tear those mechanical bastards apart in increasingly spectacular ways, I didn’t care about that. I was too busy being five-years-old again. That’s what I look for in these films. I don’t need gritty realism. I don’t need to be emotionally drained. I want to be wowed. I want to be awestruck.