Game Of Thrones: Season 8 – Episode 2 ‘A Knight Of The Seven Kingdoms’ REVIEW

Everyone thought the final season would be explosive from the off. It's given us a slow burn instead. 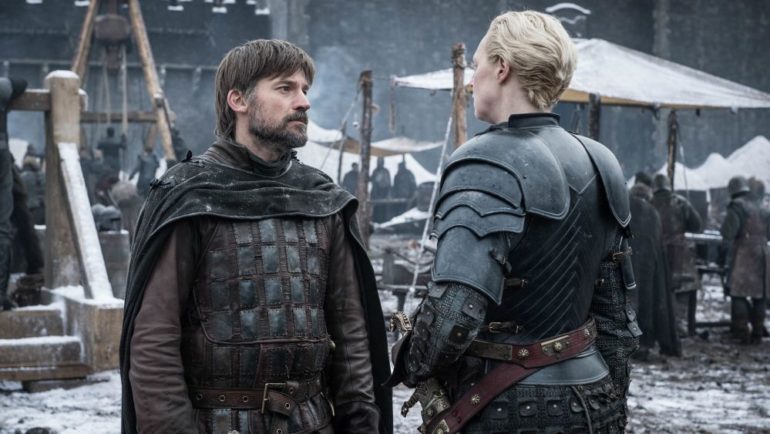 There was a line I wrote for last week’s review, only to ultimately think better of it and remove it because I thought it was unfair and a bit too cynical. In mocking reference to episode 1 being wall-to-wall reunions, it went ‘at this rate, episode 2 will go like this: reunion, reunion, monologue, reunion, sex scene, two more reunions, knob joke’. Wisely is it said that the cynics are seldom disappointed, as this is by and large what we got.

Yes, having had seventy-plus hours to get everyone in position for the ending, the show is still basically just spinning its wheels, and trying to match up all the characters who haven’t shared a scene yet. Ooh look, now Jaime’s here, ooh look, now Theon’s here. And despite last week leaving off on the hilarious sight of Jaime arriving at Winterfell only to instantly lock eyes with Bran, we rejoin him as literally everyone other than Bran lays out their complaints, and then are quickly swayed into letting him be in the gang too.

However, reunions aren’t bad things in and of themselves. As I dinged the show last week for not having the two Mormonts present even acknowledge each other’s existence, I’m obliged to praise it for giving them a scene together – and not messing around either, but getting straight into their conversation.

The core of ‘A Knight Of The Seven Kingdoms’ sees a steadily growing group of non-Stark main characters sitting around the fire taking wine together. This is self-evidently meant to feel like the calm before the storm, but it’s far, far too calm. The army of the dead’s about to turn up and kill us all – gosh, really? What a blow. It feels, more than anything, like a coffeeshop AU – this is a kind of fan-fiction where the characters you love are removed from their usual action and instead chill out in a coffeeshop shooting the shit. Lord knows people would watch it, but it doesn’t require the GDP of a small country to film.

This does offer a bit of worldbuilding lore – the only thing, when it comes to it, preventing the show from devoting itself completely to tits and dragons – when Pod sings a song about Jenny of Oldstones. Several generations of Targaryens ago, the heir apparent turned down the crown to marry Jenny, like our world’s Edward VIII and Mrs Simpson. The man who became king instead fathered Aerys II, the mad king, and the rest is fictional history.

For all that I’ve ragged on the show’s desperate attempts to pair up Tormund and Brienne – and it’s still implausible and utterly one-sided – this episode does at least have them actually speaking, rather than Tormund putting on his bedroom eyes and Brienne looking genuinely, physically uncomfortable. Still, Tormund bear-hugging Jon ended up a thousand times more chemically convincing. The worst part of that mess is that by all accounts, Kristofer Hivju and Gwendoline Christie get on really well, something you absolutely would not guess to see them onscreen.

Even if it’s taking place instead of epic battle scenes involving dragons, seeing the group sit down together and talk earnestly does have its charms. But how about the Stark kids? Is it nice to see them all sit down together? Well, we don’t know. We may never know. They’ve all finally returned to their ancestral home after many years, and only seem to ever be in the same room when it’s absolutely necessary. Given the opportunity they’re all off in different directions doing their own things – things which, I restate, do not involve climactic, earth-shattering battle scenes.

Speaking of the Starks, the other issue with the group around the fire is that, even though it’s a healthy and lively group, it barely represents half of the major characters who are knocking about Winterfell. With so many people crammed into the one place, ‘A Knight Of The Seven Kingdoms’ has to put in a lot of legwork simply to get round them all, and because of this a great deal of it seems unavoidably rushed. The montage Pod’s song is set over, cutting rapidly between these many disparate scenes, ends up not seeming all that different to the rest of the episode. There’s also the worrying sensation, in a lot of cases, that these scenes were on a checklist of stuff they had to include – but having done so, they couldn’t figure out what to do with them.

If it feels like I’m just dumping on the episode, then I apologise, but really, if there was much good to say I’d say it. The strength of Game of Thrones is obviously in the production values – the sets, the costumes, the cinematography – and this episode makes the most of that by having scene after scene in Winterfell’s murky corridors with nothing actually happening other than the writers’ paint-by-numbers dialogue. Again, I have to suggest the coffee shop AU would have worked that much better, even if only because it would be properly lit.

Knowing our time with them is fleeting, it’s perhaps not unfair for the show to want to wring every last drop of screentime out of its cast of characters – or for the viewer to want to spend one last non-sword-fighty hour with them. But the inescapable fact is ‘A Knight Of The Seven Kingdoms’ finds itself feeling directionless, unsure what it is or what it’s doing, when it’s meant to be triple-A caliber television. It’s aware, as Thrones always has been, that something’s going to be happening in the future, but this comes to the detriment of the here and now. As the Red Queen told us, jam tomorrow and jam yesterday, but never jam today.

– Jaime knighting Brienne. For all that it comes in 60 minutes of nothing in particular, it’s probably the most emotionally affecting part, and is a far more appropriate consummation of their relationship than the kind of consummations Thrones is usually known for.

– After seven seasons, the episode ending on yet another ‘the army of the dead’s coming! Any minute now!’ cliffhanger. Just get on with it and wipe out all life on earth already. 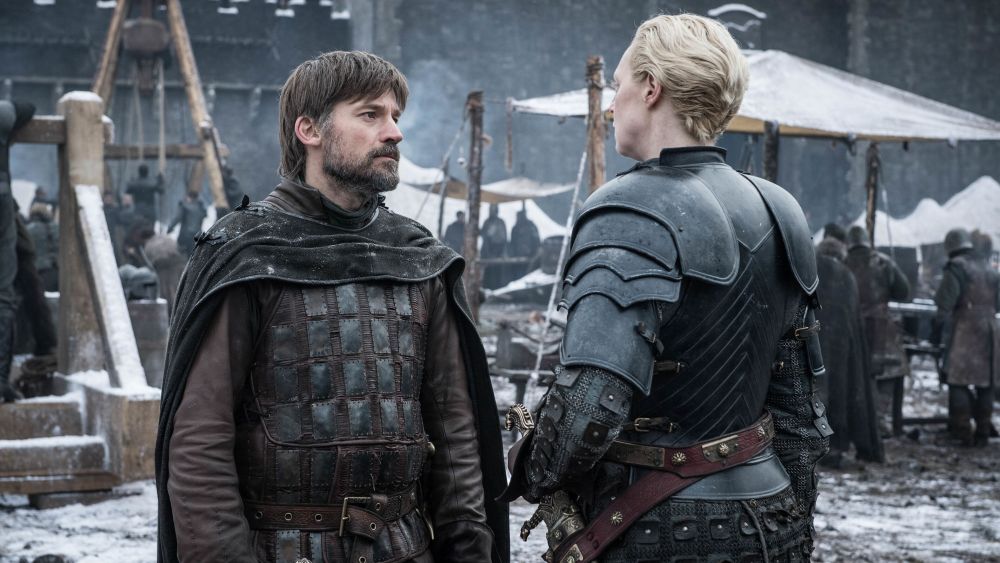 Verdict
My ratings will begin to pick up when the show delivers what it’s been promising for the past nine years.
4
Cultured Vultures is a pop culture website established in 2013 covering all things gaming, movies, and more. We eat your words.
All The News On The Biggest Games