Not quite what we were hoping for. 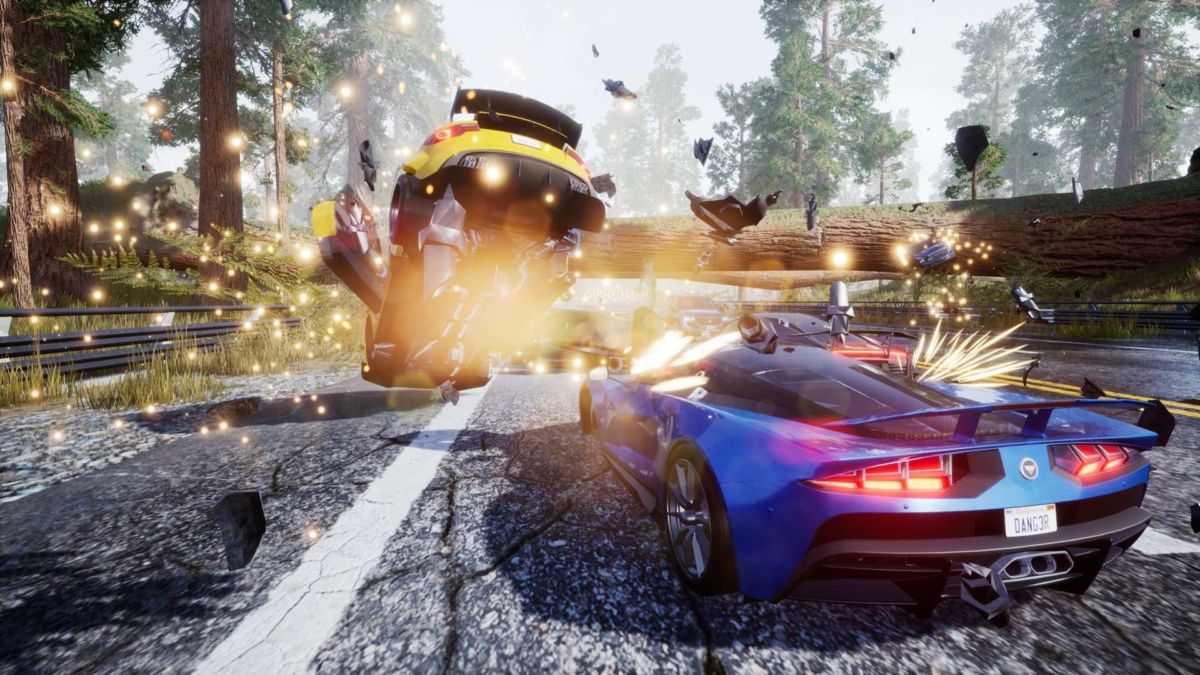 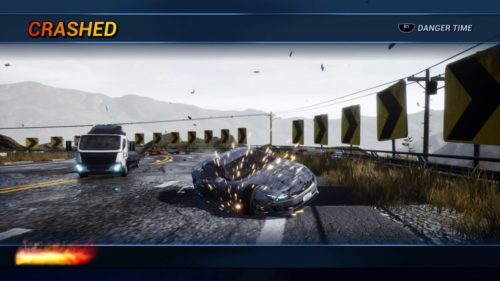 Dangerous Driving actually managed to give me a bit of an existential crisis. The spiritual successor to Burnout from some of the same developers as the series, Dangerous Driving is pretty blatant in its inspiration. Even the main menu just needs the opening riffs of Lazy Generation by The F-Ups to really ignite those Burnout 3 flashbacks, so why doesn’t it feel as good? Did old Burnout always feel this way?

Three Fields Entertainment have been emulating Burnout for a while now, with Dangerous Golf and Danger Zone drawing inspiration from the franchise’s Crash Mode. Dangerous Driving is their take on the arcade racing aspect of the series, but despite having all the right tools and formula to correctly replicate the Burnout games, the pieces of the puzzle don’t quite fit. 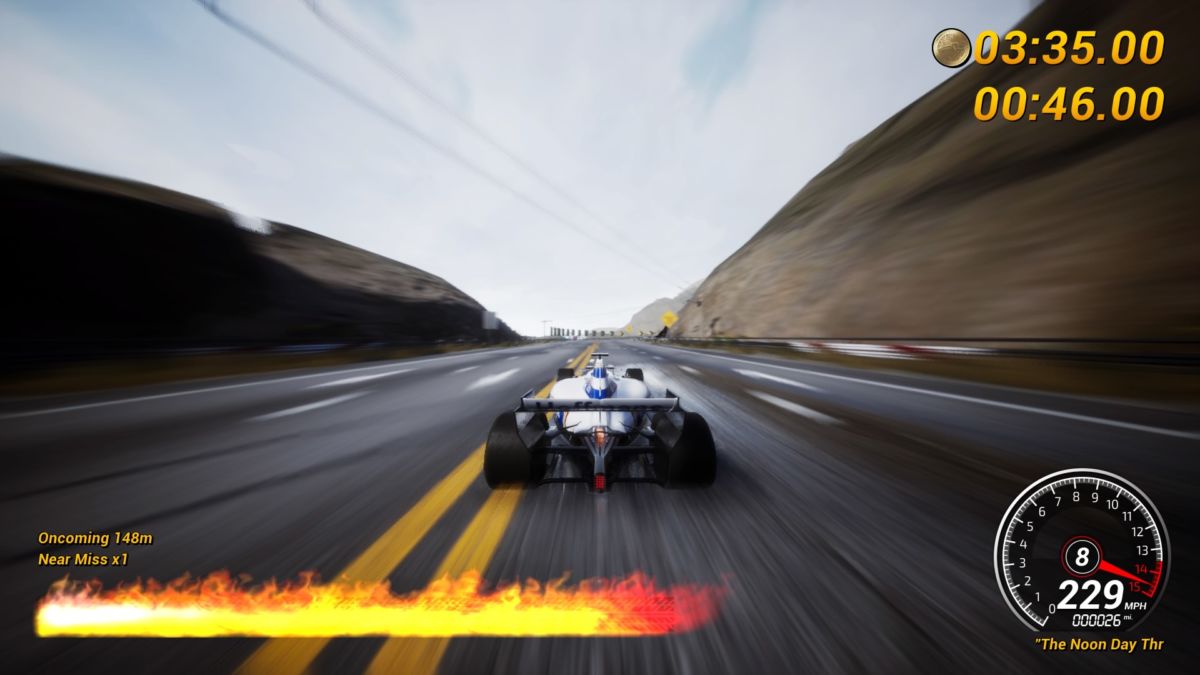 There’s also Pursuit, with you taking down rivals in a cop car in the fastest time possible, and Survival, which adds an Outrun flavour to the action (get to the checkpoint within the time limit, don’t crash). Heatwave is also great for players who liked boost chaining from Burnout 2: Point of Impact, so there’s enough here to cater to fans of all the Burnout games.

The racing itself feels like you would expect, with a heavy emphasis on performing stunts like drifts and near misses to fill your go fast juice meter. Scoring takedowns on rivals fills and extends your boost bar, so you’re encouraged to get stuck into things, taking risks to reap incredible rewards.

While it all sounds good on paper, Dangerous Driving lacks the production value of the game it’s trying so desperately to ape, so comes across as a pale imitation. It’s a weird paradox where the indie game “spiritual successor” somehow feels more soulless than the original series from a massive gaming publisher known for corporate shenanigans. 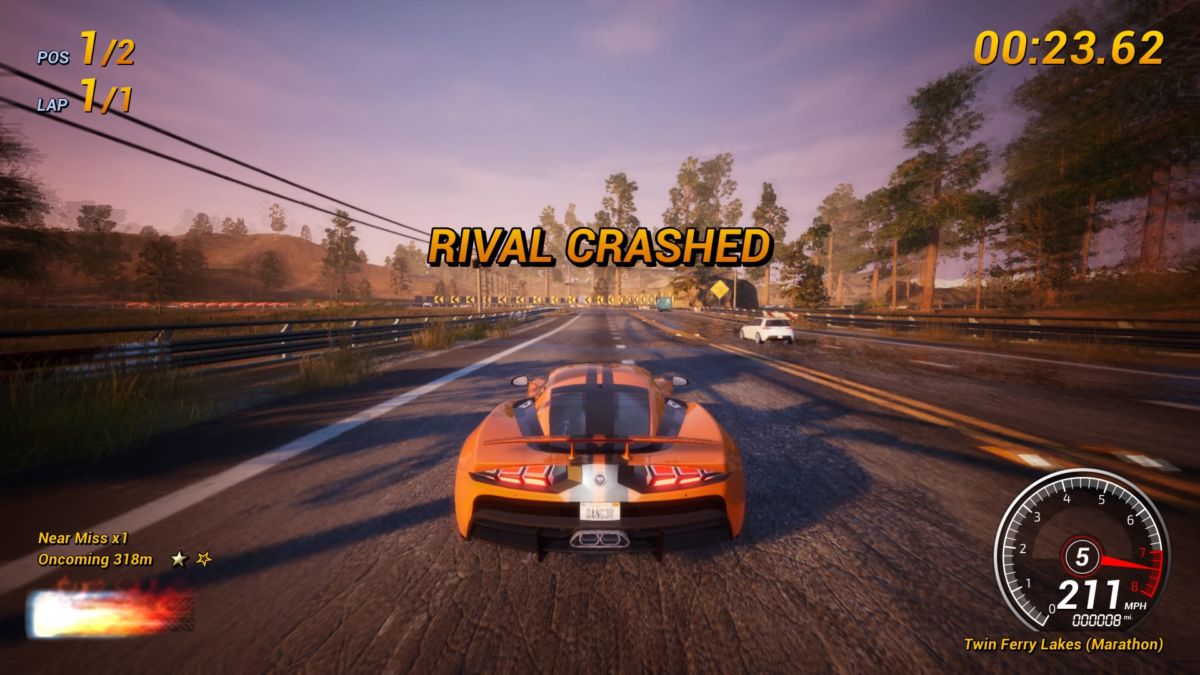 The first thing that’s immediate that feels wrong is the physics and collision detection. The handling and the sense of speed you get when you hit the boost button are all great, but the collisions with barriers and traffic can feel inconsistent. Hitting the front bumper of an oncoming car can either lead to a crash (as you would expect), a sudden bounce in a random direction (unexpected, but not unreasonable) or just teleporting through the car regardless.

Considering that the main crux of the game is all about takedowns, they arguably feel like the weakest part of the game. Smashing into your opponents feels almost weightless, with no real sense of feedback that a collision has occurred. Double takedowns seem to happen all too often by just lightly brushing your opponents. It’s rare that you have to actually put the work in to score that takedown.

The crashes afterwards also lack the spectacular nature of the Burnout series. The damage the cars take doesn’t properly convey the devastation of being slammed into a wall at 200mph, while the cars will often drift frictionlessly across the road after crashing. Enabling crash cameras is also its own set of hazards, as you’ll often return to the game on a completely different section of the track, so you’re probably better off disabling those. 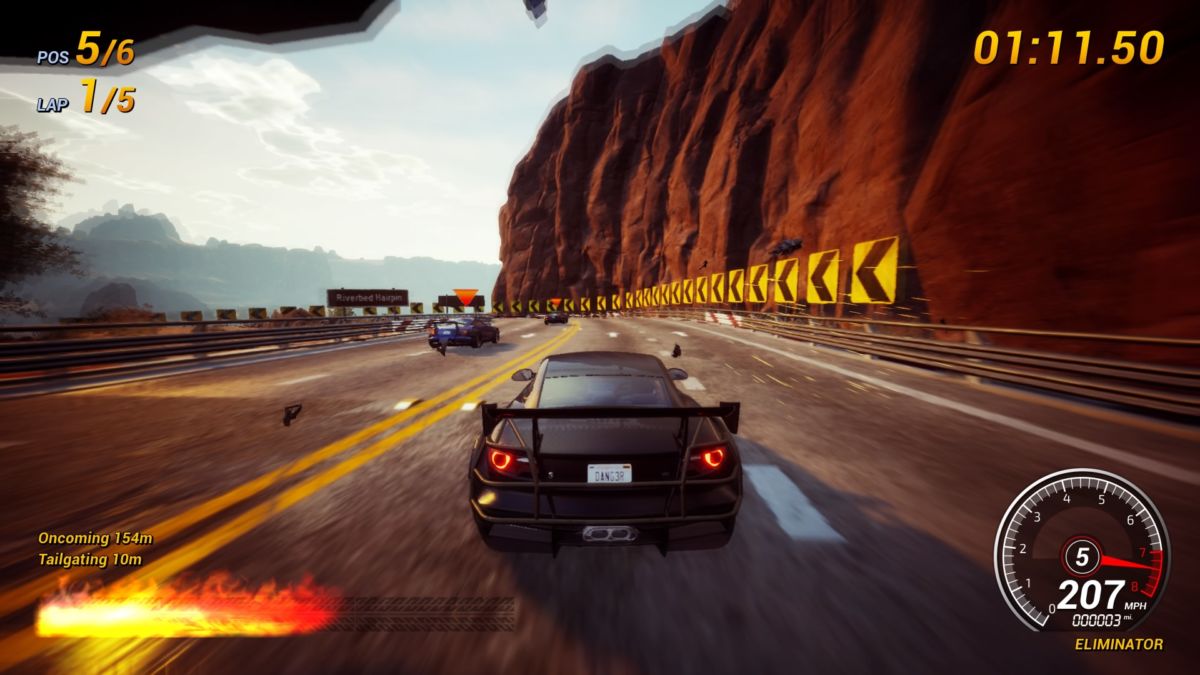 One positive aspect about crashes is that car wrecks become a permanent fixture on the track. In events with multiple laps, having permanent wrecks strewn around the road adds a new layer of strategy and danger to the game. Sure, you might have been causing multiple takedowns on the first lap, but there’s every chance that’ll screw you over in the long run. Think of it like hitting your own banana in Mario Kart.

The track design is lacklustre, with nothing in the way of Burnout’s signature shortcuts that make the tracks a bit more intricate and increase their overall replayability, while the track backgrounds are incredibly sparse rural environments. Though the textures and lighting look great, with all the tracks inspired by American National Parks, they often lack unique landmarks that truly make them stand out. There’s also no urban environments, which were arguably some of Burnout’s best tracks.

The gameplay is also rife with glitches, some small while others incredibly egregious. Already mentioned are the inconsistencies with traffic collisions, but some more offensive glitches include being bounced so high into the air the game auto-crashed me, my car automatically crashing during a rolling start, which rendered the event unplayable until I returned to the main menu, or an event starting with the medal requirements still on the screen. Only by crashing would they disappear. 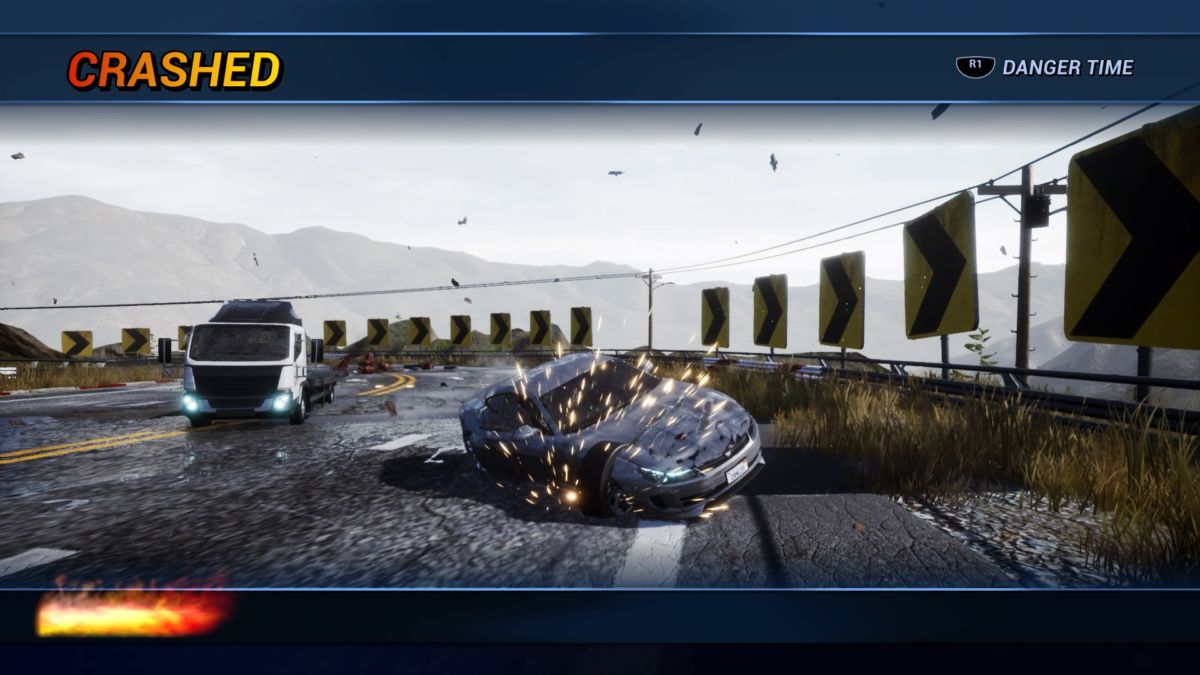 Progressing through the six different classes of vehicles isn’t great either, as it doesn’t feel like there’s enough difference in terms of the car classes. The handling across all classes is pretty much the same, but while you’d expect the speed to evolve, it just doesn’t. The Sedan class has a max speed of 200 mph while the Formula class goes to 230 mph, which is such a tiny gap that it feels like once you’ve played one class, you’ve played them all.

Dangerous Driving does try to add something different, as you can unlock new cars for each class that give you an advantage in certain events. Advanced cars have more weight that make Road Rages easier, Tuned cars expend their boost bars quicker while adding to the car’s top speed during boost chains in Heatwave events, and Prototype cars are faster overall but are more fragile.

These cars do have a benefit, though the most notable is probably the Tuned car. Being able to use boost chains to reach speeds exceeding 250mph and beyond is when Dangerous Driving feels at its best: the blistering speed and the threat of oncoming traffic around every corner creates a tense and thrilling experience, but that’s only one event type. The rest just don’t cut the mustard. 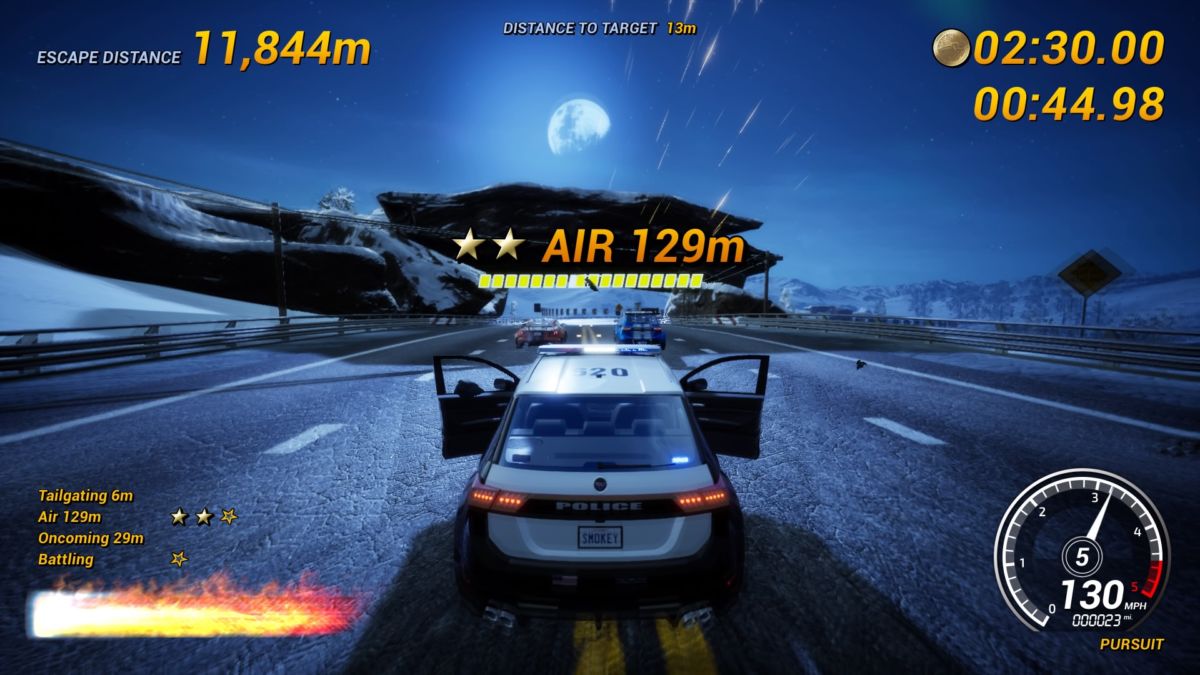 Even unlocking those additional cars feels off. You have to win a Face-Off event to unlock the car, which is fair enough, but the way the classes are laid out means you’ll often unlock the specialised car after you’ve already completed one or all of the events where that car would be useful, leaving the only incentive to be the pursuit of a better medal or time.

Considering this is a Burnout inspired game, you might be wondering why there’s no mention of the Dangerous Driving’s soundtrack. That’s because there isn’t one. Aside from one song on the main menu that doesn’t have the decency to loop, there’s no additional music in this game, but Three Fields Entertainment figured out a solution that’s kind of brilliant, at least for some.

Players can link the game to their premium Spotify accounts and listen to music while racing, using the D-Pad to skip songs. On the plus side, you get to listen to most of the Burnout 3 soundtrack while racing, and its a cost-effective method for developers to curate a killer playlist without having to worry about licensing costs. Three Fields have already created their own official playlist of about 100 songs for you to use, though if you really want to race to the Devil May Cry soundtrack, there’s nothing stopping you.

That said, the downside is that you have to pay £9.99 a month on a non-gaming service to properly enjoy a game if you don’t already have Spotify Premium. Also, I couldn’t actually get the feature to work as intended, opting instead to just use the PS4’s natural background player. Perhaps it’s because I only had a trial account, set up with the explicit purpose of not having to race in silence.

Honestly, these criticisms could be attributed to the fact that Three Fields Entertainment doesn’t have the same development power of the likes of Criterion and EA, leaving the team to focus more on fast-paced racing instead over everything else, which is fair enough, but Dangerous Driving ultimately fails to deliver the total package like Burnout did.

Verdict
A pale imitation of a great franchise, Dangerous Driving just can’t quite fill the hole left by Burnout.
5