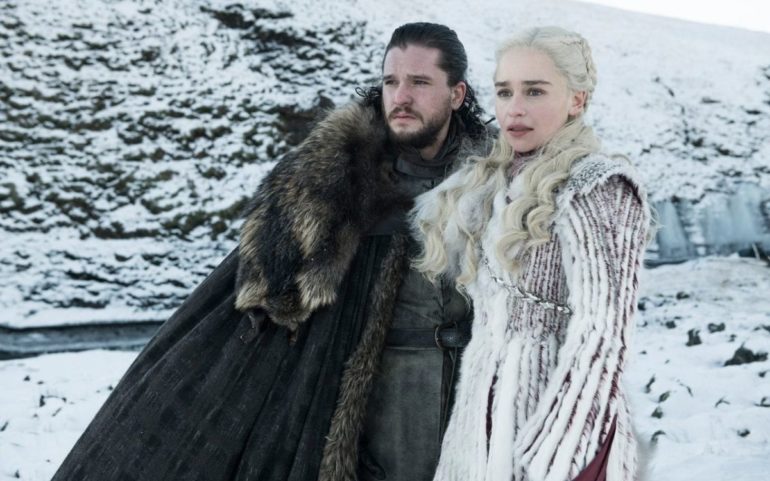 Here it is, then. Winter has come. Did you brace yourself? You should have, pictures of Sean Bean reminded us for the past decade.

Even the opening titles are hammering it home that this, now, is the endgame – with the model Westeros now completely wintered up, the Wall irreparably holed, and the locations whittled down to Winterfell, King’s Landing, and also Last Hearth, directly in the path of the White Walkers so highly unlikely to be appearing in the credits next week.

Despite having already had the best part of seventy hours to get all the pieces in position, the bulk of ‘Winterfell’ is still just that – arranging all the remaining characters at one of the two main remaining locales. This naturally brings about any number of reunions, which could have been heart-warming – but the tone is set when Arya spots Jon, then immediately also spots the Hound and Gendry, giving it the feel of all her chickens coming home to roost, and then Tyrion makes a joke about balls. This joke is the first actual words spoken of the season. Welcome to a rich fantasy world.

Perhaps it’s unfair to rag on Game of Thrones for being vulgar in this way. Back in season one, Viserys telling Daenerys that he’d let Drogo’s whole khalasar fuck her decisively illustrated that here was a fantasy series with more bodily fluids involved than Lord of the Rings. Still, Tyrion’s meant to be the mastermind of the good guys – oh yes, the way the characters are assembled are fairly clear-cut groups of good guys and bad guys now – but in practice he instead appears to be the one who makes pithy comments.

Jon and Bran reuniting likewise has the wind taken out of its sails by the fact that Isaac Hempstead-Wright is now playing Bran about as stiffly as HAL 9000 – but at least, confined to a wheelchair, the show manages to avoid the incongruous sight of him towering over Kit Harington like the rest of the Stark kids. Even Arya can more-or-less look him in the eyes these days.

The best-done of the reunions is probably Theon rescuing Yara – for no other reason that the show remembers Theon’s thing was being a deadshot with a bow, and that deep down he prefers the Starks to his own family. As such, you can expect a further round of reunions next week when Theon rocks up at Winterfell. The worst, meanwhile, is Tyrion and Sansa, since the show has her apologise for running for the hills after being forced into marrying him. The show’s never seemed certain what to do with Sansa – actually, that’s a lie. It has very clear ideas on what to do with Sansa, and they’re bloody stupid. And the clearest omission, by far, is little Lady Mormont somehow missing that Jorah Mormont, her family’s own black sheep, is wandering around the same castle as her as bold as brass.

While this surprisingly isn’t a reunion, ‘Winterfell’ sees Daenerys and Sansa coming face-to-face – and here the show sticks firmly by its old adage that women be catty. On Game of Thrones, if two women share a scene and have speaking parts there’s incredibly good odds that they will choose any reason available to hate each other. Of the women who’ve met each other through all stacking up in Winterfell, the two who’ve got along best are Arya and Brienne, and this literally manifested itself in a swordfight.

Sansa does at least have an internally consistent reason not to like Daenerys, since Jon’s given up being King in the North to bow to a fancy-Dan Targaryen overlord. This would have been the perfect time for the show to cite its own internal lore, like I’m about to – the North was one of few of the Seven Kingdoms to be incorporated into a unified Westeros without massive bloodshed, thanks to the actions of Torrhen Stark, the King who knelt. Seeing a massive Targaryen army with a bunch of dragons poised to come down on his head, Torrhen – as his title suggests – knelt, rather than getting his people burnt alive. As Greatjon Umber put it in season 1, “it was the dragons we bowed to”. Instead of any of this, the show chooses to have Sansa put it down to Jon’s massive crush on Daenerys.

Granted, she’s not strictly wrong about that, and we get a profoundly silly moment of Jon and Daenerys walking through a field of dung-age war preparations making heart eyes at each other. While this is going on, Tyrion, Varys, and Davos – Team Older and Wiser, as they seem to be positioning themselves – speculate that maybe they should have their photogenic young rulers get married, to ensure the succession after the war.

This is risible for two reasons. One, Jon and Daenerys clearly don’t need the help, they’re already banging. Two, and here you can probably tack on an extra spoiler alert, it’s unlikely they’ll make it out alive. I’ll be upfront about this, I’ve read the books, I got heavily into the meta-analysis, and all the evidence points to Jon, Daenerys, and probably also Tyrion sacrificing themselves to stop the White Walkers. It’s the slightly younger generation who are tipped to rebuild the Seven Kingdoms – which will probably Balkanize back into being Seven Kingdoms rather than a unified feudal state. Remember when Daenerys had that vision quest, and saw the Red Keep’s throne room wrecked up and full of snow? That wasn’t poetic license, or a kind of friendly suggestion.

Uncle George has always been clear that the series will have a ‘bittersweet’ ending. God knows the show’s strayed alarmingly from the books, and you can interpret ‘bittersweet’ any way you like, but this isn’t going to be a Return of the King scenario where every main character (apart from Sean Bean) miraculously survives, and then they all drink lemonade. Game of Thrones likes to shock, and since the start, its main trick has been to not have the heroes always win. Remember Sean Bean’s character? Remember his sad wife and ill-fated son? Hell, the show’s already killed off Jon Snow once.

True to form, the villains are all doing fine. Cersei is pleased to hear the Wall’s come down, although manages not to kick any dogs. Euron’s pleased with himself – as Cersei laboriously explains to us, he’s incredibly arrogant, and he has every reason to be, given that he’s still King of the independent Iron Islands, and nobody seems to have noticed. And now he’s brought in the Golden Company on Cersei’s side, under Harry Strickland – more properly ‘Homeless’ Harry Strickland, a reference to how both he and the core of the Golden Company are Westerosi exiles. Again, a choice bit of worldbuilding which the show omits in favour of sexual tension and smutty jokes.

So yes, Team Bad Guys seem absurdly complacent about the world-ending threat coming through the Wall – but so are Team Good Guys, with far less excuse. The preparations for the upcoming battles (“longer than Helm’s Deep”, remember) are all consigned to the background – the main issues of note are people getting bitter the North’s no longer independent, and Jon’s parentage. If you’ll remember, Bran was insisting they tell him he’s a Targaryen in the season seven finale, yet they take most of ‘Winterfell’ to get around to it.

It does, at least, carry an appropriate level of unpleasant weight, helped somewhat by Sam making the reveal moments after Daenerys tells him she killed his whole family. (Despite the tragic music in the background, this is a moment of wonderful black comedy – when Daenerys says she burned his father alive, Sam blubberingly reasons it’ll at least be nice to see his brother again, and she has to chew her lip over breaking that news as well.) And like the heroes not always winning, here, again, Game of Thrones is getting back to its mission of subverting fantasy stories. Our beloved underdog protagonist discovering he’s the secret heir to the throne isn’t a moment of triumph – it’s a heart-rending thing that destroys his whole self-identity, and also means he fucked his aunt.

Speaking of incest, when Jaime turns up at Winterfell, the final reunion of ‘Winterfell’ hits the same black comedy note as Sam’s unfortunate family matters. He’s probably hoping he has an in here with Tyrion, the brother who through it all still loves him, or otherwise Brienne, his weird chivalric crush. Instead, he gets off his horse, and immediately locks eyes with Bran – who he tried to fling to a gruesome death in the first episode.

Killings: a couple of Euron’s crewmen – one being a blink-and-you’ll-miss-him cameo from Rob McElhenney – and the poor little Lord Umber, twice over.

Gratuitous sex: Bronn’s having a go on three prostitutes at once, but is rudely interrupted, so half a point.

Dragons: more gratuitous than the sex this week. Daenerys takes Jon for the other sort of ride, and they get plenty of flybys of Winterfell, to the point everyone’s already getting used to them being there. This amount of CGI comes at a cost, though – neither hide nor hair of the direwolves to be seen, and the Golden Company – to Cersei’s disappointment – haven’t brought their war elephants. 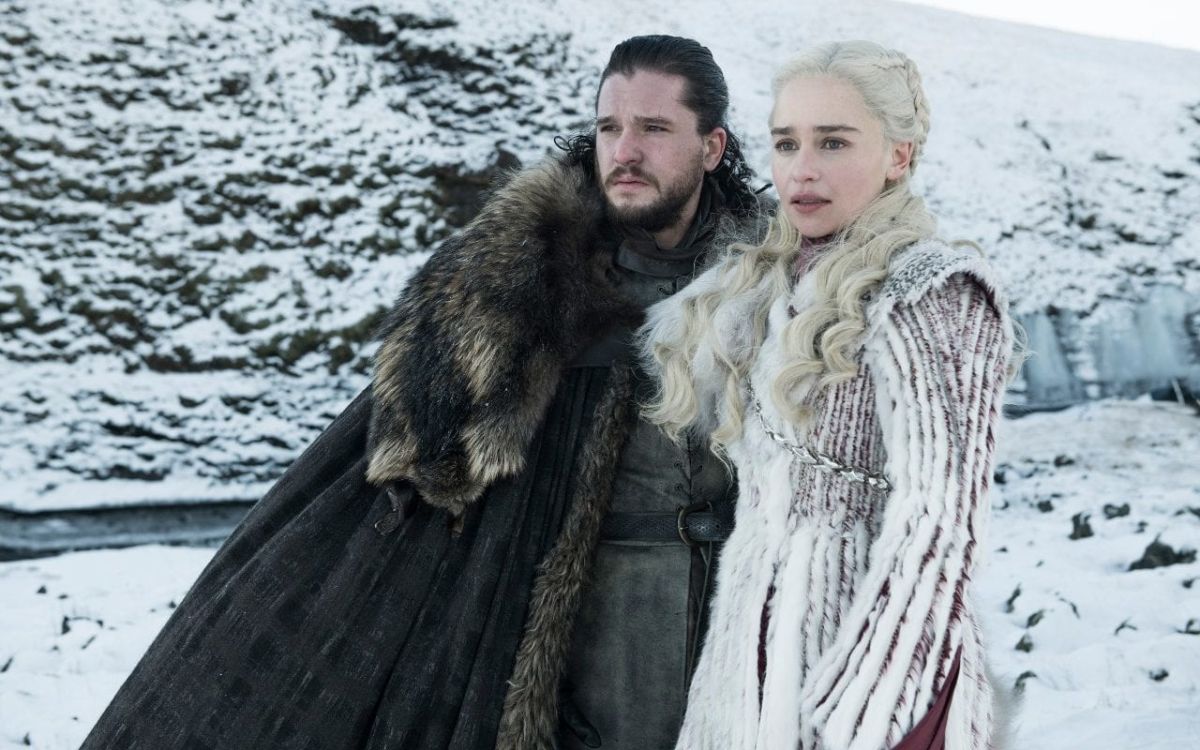 Verdict
Some nice developments, but we didn't tune in to the final season hoping for people in rooms talking - we came for BLOOD.
6
Cultured Vultures is a pop culture website established in 2013 covering all things gaming, movies, and more. We eat your words.
All The News On The Biggest Games