For fear of a certain dragon-related series stealing all the thunder, here's some of the other shows coming out this April. 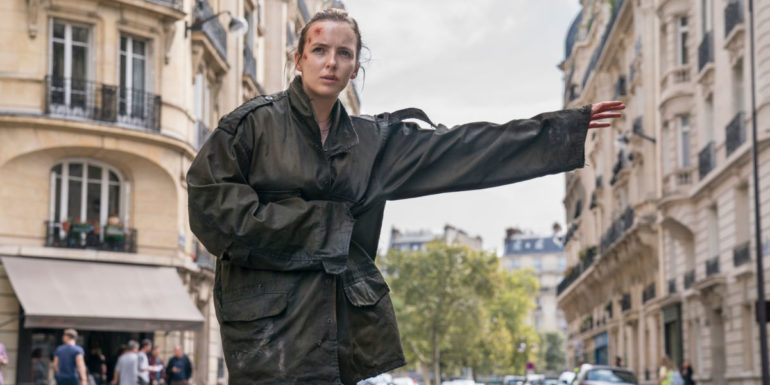 As you’re statistically already well aware, Game of Thrones returns this month for its eighth and last season. Before too long, we’ll have to land on another media phenomenon that’s more popular than God, because what else are we going to do – read a book? Go outside? Yeah, not likely.

Despite the all-consuming nature of the Thrones franchise, some have claimed that other shows do exist. Personally I don’t believe a word of it, but here’s the run-down of which ones we’ll see this April anyway.

With Jordan Peele’s star riding high off the backs of Get Out and Us, we now see him turning his hand to the anthology form – specifically the latest revival of the classic series The Twilight Zone. I say ‘latest’ advisedly, since there’s been two previous attempts to reboot the format, both of which are largely forgotten, consigned to the long, long shadow of the original.

Most contemporary viewers will probably know The Twilight Zone best through the many parodies of its more iconic tales – most notably The Simpsons’ various Halloween specials and Futurama’s show-within-a-show ‘The Scary Door’, the latter condensing the Zone’s savagely ironic twists into ultra-truncated thirty-second microfiction. If you’ve seen anything where a gremlin’s destroying the plane, that’ll be a Twilight Zone reference – and, with the original Nightmare At 20,000 Feet being one of the show’s most iconic stories, the first planned episode of this run has been duly titled Nightmare At 30,000 Feet.

Leave it to Phoebe Waller-Bridge (she of the excellently vile Fleabag) to take a series of novels about a hot lady hitwoman who’s so cool and tough that nobody better mess with her, and turn it into a genuinely compelling thriller. While part of the charm of Killing Eve is all the blood-pumping ultraviolence you might expect from such a work, another big part is how it’s made most of the important characters incredibly bisexual. I am not part of this new school of cultural critics who believe that one same-sex kiss merits an Oscar nomination, but when you take the kind of cat-and-mouse thriller dynamic which is fraught with sexual tension anyway, and finally rip off the mask by having one of them admit to masturbating about the other – well, it’s at the very least refreshing.

Both leads have thus far been stunning throughout. Jodie Comer is borderline eerie as international woman of mystery Villanelle, deftly balancing cold, competent murderer and damaged little girl – however, I’d actually give greater credit to Sandra Oh’s more understated performance as Eve, the frazzled security services woman on her tail. Despite Oh’s American accent, I’ve praised her before – and do so again – for delivering UK colloquialisms like ‘quid’, ‘knob’, and ‘I’m so tired’ quite so naturally.

It feels like cheating to mention this here, since there’ll doubtless be a flood of excited headlines coming in the leadup to the eighth and final season – tantalising, speculating, champing at the bit, hoping against hope that the increasingly ropy home blockbuster can pull a satisfying ending out of the bag.

However, it does have the advantage that it’s finally ripping the gloves off. No longer dancing around and hinting at a payoff sometime in the far-flung future, now it must finally make good on the promises it’s been making since day one – full-blown, ice zombie apocalypse vs. massive dragons all-out continent-wrecking mayhem. Anton Chekov wrote that if there’s a gun on the wall in act one, then in act three it must be fired, and it was in that same spirit that The Wall, one of the show’s more impressive CGI creations, came crashing down in the last moments of season seven.

Far from the limited budgets of the first season, when the major battles had to be carefully shunted offscreen, this final season promises a battle longer than Helm’s Deep in The Two Towers – whether it’ll be as good is another matter, but still, it’s a bold claim to make. The set-piece battles we’ve seen already have been some of the most acclaimed episodes of the show, particularly season two’s ‘Blackwater’, which won a Hugo award and drew especial praise for director Neil Marshall, the man behind the excellently splattery Dog Soldiers.

Even though the stage musical’s been running non-stop since sometime in the late Middle Ages, and the 2012 film version brought in some seven times its budget at the box office, they’re having another go at adapting Victor Hugo’s revolutionary novel – and, controversially, this time it won’t have a single musical number. This might seem like an odd decision, but you have to consider the little-known but irrefutable historical fact that most real French republicans rarely if ever narrated important events through song.

Starring Dominic West as Jean Valjean (shades of Jean-Luc Picard in having the ultimate English gent play a Frenchman) and David Oyelowo as Inspector Javert (in quite a turnaround from Oyelowo’s previous role as Martin Luther King in Selma), this version of the story I don’t think anybody calls ‘Thin Mizzy’ promises a similarly all-star cast to the 2012 adaptation.

The way we talk about gender, you’d think the 21st century saw humanity’s first footling steps into it being any sort of a grey area – and that before Ru Paul got his first big break in the ‘90s, it was either handlebar moustaches or hoop skirts, and never the twain would meet. Don’t get me wrong, in a lot of cases it was, but if you’re talking about anyone with real wealth at their command, gender quickly takes a back seat to raw power. They don’t call it ‘fuck you money’ for nothing.

As such, there’s plenty of stories from history of women taking on what were considered men-only roles – often by cross-dressing (for instance, military surgeon James Barry) but just as often openly as women, daring anyone to make something of it (like pirate queen Ching Shih). Gentleman Jack, based on the life and times of Yorkshire landowner Anne Lister, gives us a borderline case – she never identified as anything other than a woman, but acted masculine enough they called her Gentleman Jack, and, more controversially for the 1800s, lived openly as a lesbian.

Less Downtown and more Poldark, this, set as it is in the gritter, more provincial side of Britain and with a heavy focus on Lister’s ownership of a coal mine. Yeah, you heard me, a woman owning a coal mine. Makes today’s twitter-based scandals seem quite quaint, doesn’t it?