Kicks and uppercuts all day. 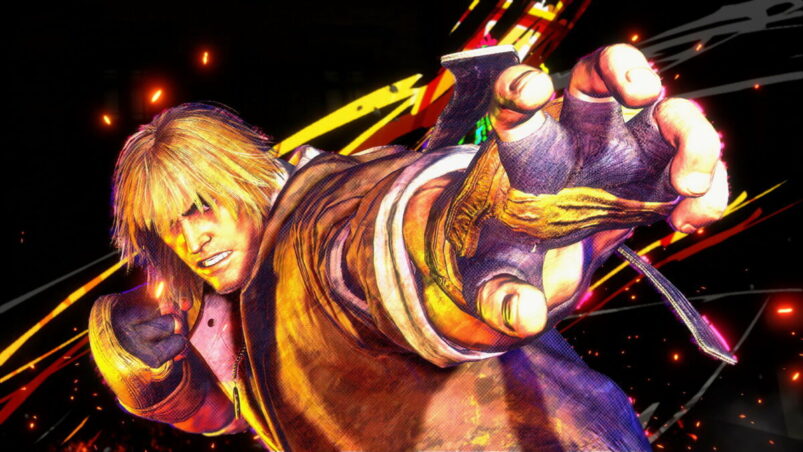 Since the beginning of Street Fighter’s history, it’s always been about two characters, Ryu and Ken. While Ryu has always been the poster boy for the series, Ken’s style and alternative versions of moves has made him a franchise favourite for a lot of players. In Street Fighter 6, the differences between Ryu and Ken are as wide as they’ve ever been, and we’re not just talking about Ken’s disheveled new look.

Here’s everything you need to know about Ken’s movelist in Street Fighter 6, including his Special Moves, Overdrives (EX Moves), Unique Moves, Super Arts and Critical Arts.

The Street Fighter staple fireball, the Hadoken is your go-to option for keeping your opponent at distance, though it can also be used to extend combos via Super Art cancelling. Pressing light, medium or heavy will control the speed of the Hadoken, which can be useful in catching your opponent off-guard. Pressing two punch buttons together will perform an Overdrive Hadoken, which hits twice and deals more damage.

If Ryu’s known for his fireballs, uppercuts are Ken’s domain, and his Shoryuken is not to be trifled with. Depending on if you press light, medium or heavy, his Shoryuken will hit either once, twice or three times, while the Overdrive Shoryuken hits six times and does the most damage of his regular Shoryukens. Ken’s Shoryuken is your go-to combo ender, so be sure to practice the input as much as possible.

The classic Shoto hurricane kick, Ken’s Tatsumai Senpu-Kyaku possesses different properties to Ryu’s. While Ryu’s Tatsu causes a hard knockdown on hit, Ken’s can hit multiple times, though his heavy Tatsu will finish with a knockdown. His Overdrive Tatsu, performed by pressing two kick buttons, will see Ken perform a rising kick, before hitting the enemy multiple times in the air. Ken’s light Tatsu makes for a great combo starter, though OD Tatsu is a brilliant combo ender too.

(quarter circle back + kick during a forward jump)

A hurricane kick performed in the air, this move also has different properties to Ryu’s version, namely that the Overdrive version doesn’t suspend Ken in midair. However, both versions of the both still serve the same function, allowing players to cover their aerial approach somewhat and even get some surprise attack on their opponent from the air.

Dragonlash Kick has the same input direction as the Shoryuken, so make sure to practice those inputs. The kick itself is a leaping round that allows you to close your distance on an opponent. It’s useful as a way of creating pressure from mid-range, and can even be used in combos. The Overdrive version launches quicker than the regular attacks, making it more viable for following up certain combos.

If you’re looking to advance your mix-up game, the Jinrai Kick will become your new best friend. The Jinrai Kick is a simple standing roundhouse, but Ken can follow it up with a variety of different attacks by pressing forward and a kick button during the move. Note: Ken will only be able to follow up a light, medium or Overdrive Jinrai Kick. A heavy Jinrai Kick will cause a knockdown.

The Kazekama Shin Kick is a low attack achieved by pressing the light kick button, while the Gorai Axe Kick is an overhead that’s done by pressing the medium kick button. Both attacks are perfect at keeping the opponent guessing on if you’re attacking high or low, as overheads cannot be blocked while crouching, but low attacks can’t be blocked by standing. Pressing forward and heavy during a Jinrai Kick will perform the Senka Snap Kick, which is a follow-up roundhouse kick that’ll deal decent damage.

One of Ken’s biggest offensive tools, the Quick Dash allows Ken to close the distance on his opponent while unlocking a host of new offensive options. For starters, he can perform three different moves depending on if he presses light, medium or heavy kick during the move. A light kick will result in an Emergency Stop, which can keep your opponent guessing. Medium kick results in the Thunder Kick, an overhead designed to punish crouching. Finally, the Forward Step Kick is a thrust kick from long range that’s great at poking through an opponent’s attacks.

The Quick Dash also has a unique property in that it alters the effects of certain Special Moves if they’re performed during the dash. Mostly, it just means they get added flames on their attacks for more damage, which is nice. The Special Moves that it affects are the Shoryuken, the Tatsumaki Senpu-Kyaku and the Dragonlash Kick.

A quick two hit combo of uppercuts, Chin Buster 2nd’s real virtue comes from the fact that you can cancel both parts of the attack into Special Moves or even Super Arts. Ideally, you’ll be using this combo to set up your Shoryukens and other hard hitting attacks.

A three hit combo of kicks, the Triple Flash Kicks are definitely not to be confused with Guile’s backflip kick. That’s a different kind of Flash Kick. Ken’s Triple Flash Kicks have quite a long range to them, so they could be used to convert damage off of a missed attack.

The Dragonlash Flame sees Ken launch his opponent into the air with a kick, before taking to the skies himself to continue the beatdown. As it’s a level 1 super, the base damage isn’t the best, however the move is invincible during its start up, so if you can execute it while the opponent is attacking, you’ll deal a fair bit more damage because of it being a counter hit.

The Super Art that’s been haunting Justin Wong since Street Fighter 3: 3rd Strike, the Shippu Jinrai-Kyaku is a series of kicks followed by a rising Tatsumaki Senpu-Kyaku. As the move’s incredibly quick to start, it can be a great way of landing counterattacks on opponents, or following up on certain combo hits.

Ken’s ultimate technique, the Shinryu Reppa is a series of three Shoryukens, the third one being a massive hit that even adds some spin just to be that little bit extra. Those good at execution will be able to use this Super Art as a follow-up to some of Ken’s other attacks and combos, though sometimes you won’t connect with the first hit which is what triggers the majority of the move’s damage. If you miss, Ken will still perform a single Shoryuken, which can be used to juggle a mid-air opponent, but the three bar cost of the move means if you’re going to use it, make sure it lands.

If you use the move at 25% health or less, you’ll unlock the Critical Art version of the move, which sees Ken follow-up the massive spinning Shoryuken with a straight shot to the face, dealing massive damage. Again, this only triggers if you land the first hit of the move, so if you miss or your opponent is blocking, you’re out of luck.