North and South has it all, and much more. 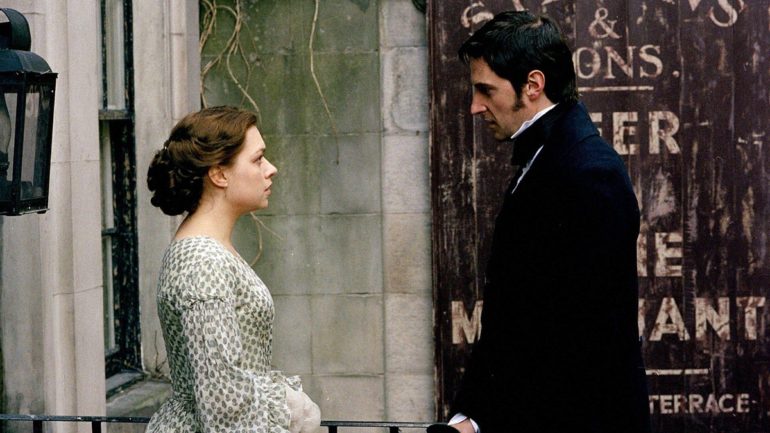 It’s better than any Dickens adaptation (apart from The Muppet Christmas Carol, but we won’t go there). It’s better than any version of any Victor Hugo novel. It’s better than any Bronte based movie or TV show (and generally you’d have to pry Jane Eyre from my cold dead hands). What I am saying is, North and South is the best Victorianish era costume drama I’ve ever seen, and if you haven’t seen it, I can only implore you to sit down with it as soon as you can.

Based on the novel of the same name by Elizabeth Gaskell, North and South follows the story of Margaret Hale, a southern vicar’s daughter who is forced to relocate to the north of England when her father is disgraced. There she learns a few things about poverty and the state of industrial England, makes some unlikely friends, and meets John Thornton, a gruff factory owner who has problems of his own. The two clash at first, but it won’t take a genius to work out what happens between them in the end.

So far, so costume drama, I hear you cry. And described like that then sure, North and South is very much like any other. But it’s more than that. So much more.

There are three things that make North and South stand out from all the others I’ve seen: the story, the themes, and the casting. Two of these strengths come from the novel itself, so I’ll start with those. Gaskell created something quite special with this, especially by Victorian standards.

Firstly, the story. One of the first things to strike you with North and South is that it’s very realistic. What I mean by this is that there’s none of those silly one in a million coincidences or chance meetings that make a Dickens plot work. There’s no ‘eyes meeting across a crowded room and falling in love at first sight’ nonsense. There is a bit of melodrama – Margaret loses both her parents in quick succession, and her benefactor also conveniently dies, leaving her quite a bit of money – but none of those things really do much to advance the plot, or change the ending too much.

In general, the story feels very contemporary in its telling. Margaret is not flawed as such, but she has much to learn about lives other than her own, which she does admirably. She learns that her prejudices about the north are mostly unfounded. Her friendship with Nicholas, a factory worker, and his dying daughter Bessy, is just as important to her character development as the romance bit. Factory owner John is also not really flawed in the same way that a Bronte hero is. He’s tired, and he works hard, and he has an inkling that he needs to make things better for his workers, but he doesn’t know how. In a wonderfully symmetrical bit of storytelling, his own relationship with Nicholas is just as integral to how he changes as it is for Margaret. 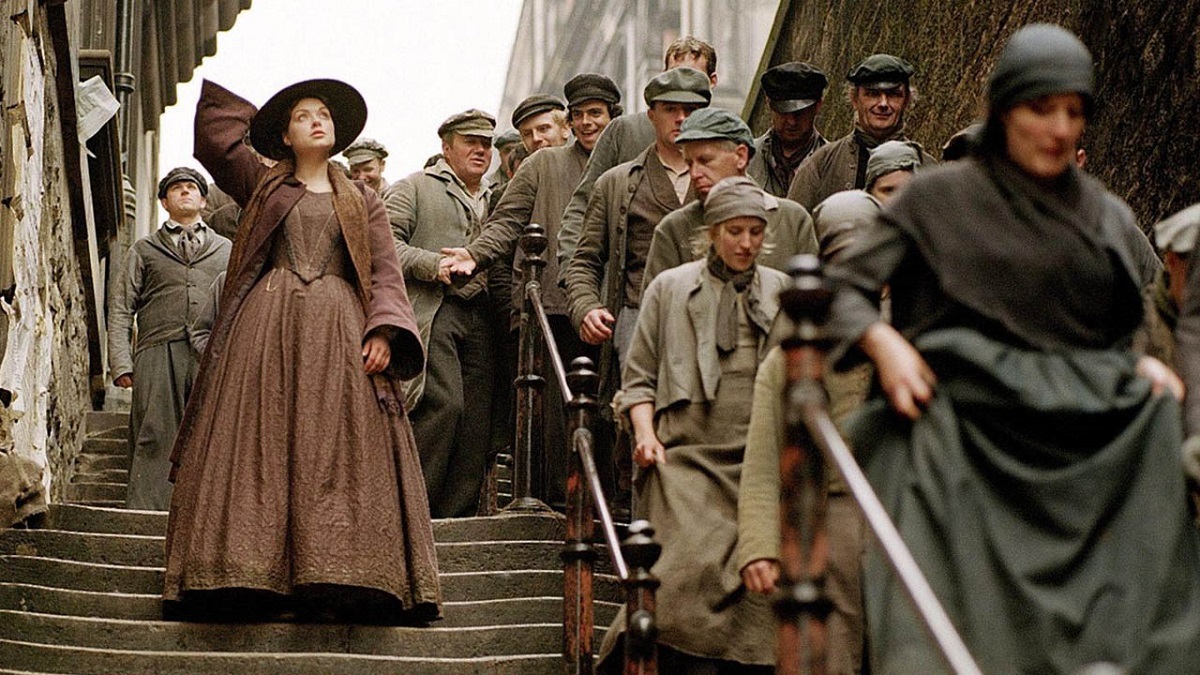 Which brings us, sort of, to the themes. A lot of television adaptations of these kind of novels, probably due to runtime more than anything, tend to emphasise the romantic storyline at the expense of most other plotlines. Somehow, in a lean four episodes, North and South manages to not only give adequate screen time to the themes but also gives the romantic centre the time it needs too. Screenwriter Sandy Welch (also responsible for my all-time fave version of Jane Eyre) has done Gaskell a great amount of justice here. Although she was mostly dismissed as a novelist during her lifetime, Gaskell has since been recognised as producing quite complex explorations of social issues.

North and South is as much about the tension between the workers and the masters as it is about anything else. It depicts strikes from both sides of the picket line, using Margaret’s friendship with Nicholas and her involvement with John to bridge the gap, and shows how strikes are completely necessary but also devastating for all involved – even the masters. One of the most affecting storylines is that of Boucher, a father of six children who knows the value of the strike but also fears for his family if he is forced to stay away from work. Boucher is eventually driven to suicide by his fellow factory workers, who shun him for wanting to work, and by his inability to provide for his family. His story is of most importance to Nicholas, a supporting character, and it could have easily been justified as a necessary cut to slim down the story for television. But Boucher stays, because he is the embodiment of a theme, namely the danger of refusing to see another point of view.

Another theme is prejudice, and the show gives a lot of time over to that. North and south, depicted in the novel, are so different that they might as well be different countries. The only character who begins the story free of assumptions is Margaret’s father, the gentle vicar, who is determined to make the most of life in the north and quickly makes friends, particularly with John. The rest of them are a prejudiced lot, and we spend as much time with them – Margaret and John’s mothers, Nicholas, Dixon the servant – as we do with Margaret and John. They all have a lot to learn, and we spend four hours watching them do it. In the novel, Gaskell gives them all a rich story, full of learning opportunities and the show does not neglect them. The sole character who is a costume drama caricature is Fanny (I know), John’s sister, who is a bit of an airhead mostly concerned with getting married. But even she, I think, has moments where she is more than that.

The last of the three reasons I think North and South is the best is the casting. The supporting roles are played by some brilliant actors – Tim Pigott-Smith is the gentle Reverend Hale, bringing all his classical acting excellence to a small but pivotal role. Brendan Coyle, of Downton Abbey fame, is a fantastic Nicholas – prickly and conflicted and, ultimately, very kind. Sinéad Cusack plays Hannah Thornton, John’s mother, and she is magnificent. Hannah is a woman of great strength and resilience, as hard as the unforgiving north itself, but also someone who fiercely loves her children and who always, always keeps her word. Cusack plays it as though she could break your arm if she fancied it, and then turns around and gently ruffles her son’s hair, and she is completely convincing at both.

But the biggest success, of course, is the casting of Daniela Denby-Ashe as Margaret and Richard Armitage as John. Their chemistry is the icing on top of what is already a very tasty cake. Denby-Ashe was twenty six when she played Margaret, and she had the perfect mix of wide-eyed youthfulness and a more mature aspect that Margaret definitely needs. She is a naïve character to be sure, but she is very far from stupid and Denby-Ashe just got that. Armitage is so absolutely perfect as John that it is impossible to imagine anyone else playing him. He wasn’t too much older than Denby-Ashe and, despite John’s pressures, he also needed to be both young and vulnerable as well as hard as nails. Armitage aces his performance too.

And it is their chemistry, and those performances, that means North and South is PEAK ROMANCE. Another thing that makes North and South a bit different to other costumes dramas – especially Austenish or Bronteish ones – is that John knows he’s in love way before Margaret does. It lends a bit of a different feel to the whole affair, as he is more inclined to keep his feelings locked up tight than a typical costume drama heroine might be, and damn if it isn’t pretty great. I will fight anyone who says they can find me a better angsty romantic scene than the ‘look back at me’ one.

Margaret is leaving for the south following her father’s death, and John watches her carriage leaving, begging her to look at him. We are treated to an amazing extended shot of John as he realises that she really isn’t going to turn around, and that the woman he loves is probably disappearing from his life forever. And the best fifteen seconds of work Richard Armitage has ever done. Fight me.

When Margaret and John finally get together at the end, it is absolutely as x-rated as it is possible for a BBC Victorian costume drama to be. No words are necessary as Denby-Ashe and Armitage have completely convinced us with their performances. She kisses him first and he has his collar open! It’s set on a train station – a welcome change to the novel – and is there a more romantic setting? I think not. Absolute kudos to Sandy Welch for that little change, the cherry on the top.

This adaptation is fifteen years old this year, and I don’t think it has aged a day, or been bettered. It absolutely should be more well-known and more popular than it is, and I implore you to watch it. At just under four hours, you can knock it out in a single Sunday afternoon, and trust me – once you get started, that is exactly what you will want to do.

Happy birthday, North and South – I will never love another one like I love you.