Ash spent his Christmas exploring Terca Lumireis, and he liked it a lot. 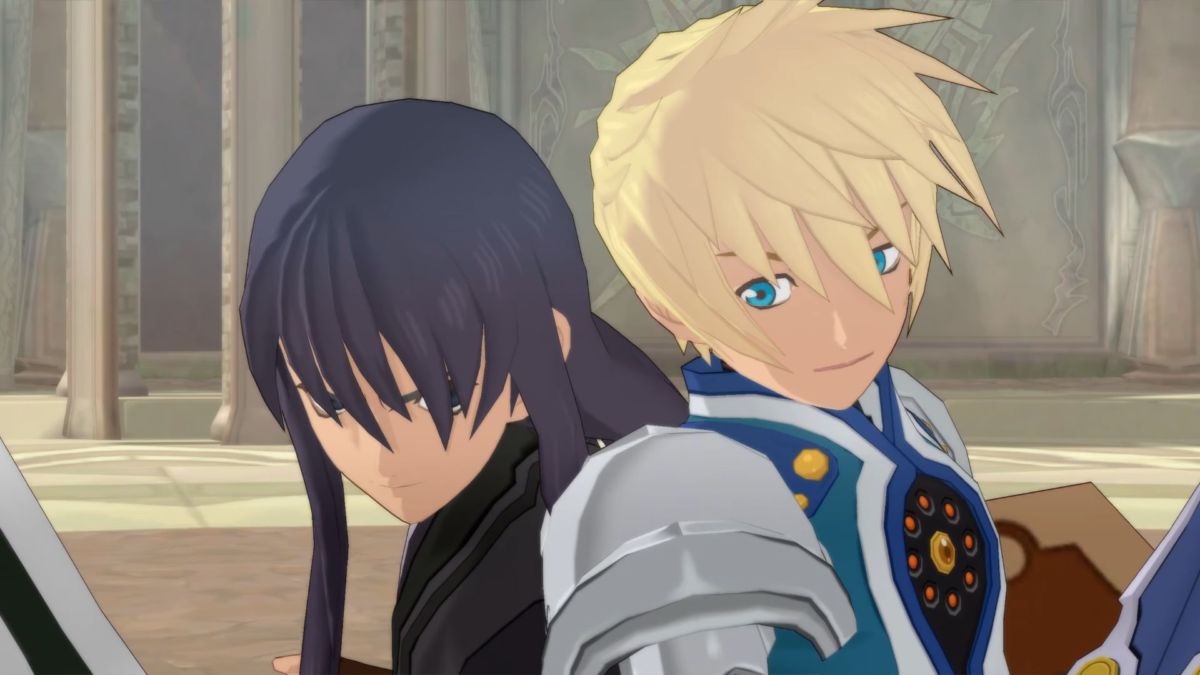 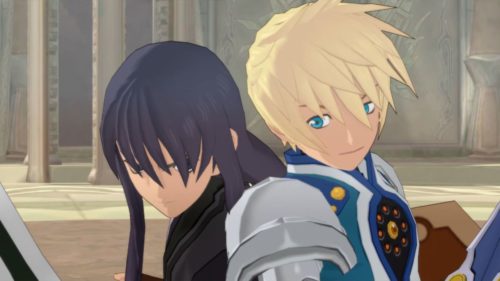 There are many gamers out there that would have you believe that re-releasing games from over a decade ago isn’t a good thing, but I’d disagree. Being able to replay some of my favourite older games on modern consoles is always a plus, but the biggest draw is the chance to catch up on some titles I might have missed first time round; titles like Tales of Vesperia.

Released in August 2008 on the Xbox 360 in North America and Japan, followed by a June 2009 launch in Europe and Australia, Tales of Vesperia was, and arguably still is, considered to be the best game in the Tales series. After release, a number of accompanying manga titles and an anime prequel were released, further cementing the success of the game.

As a celebration of the 10th anniversary of the game’s release (if you split the difference between the 2008 and 2009 releases anyway), Bandai Namco are re-releasing the game as Tales of Vesperia: Definitive Edition on modern platforms. This version is based on the Japanese only PS3 release from 2009, which included new characters and hours of additional content, so even if you played the original release, there’s a reason to come back.

As for new players, what can they expect? For starters, you can prepare to have at least 50 hours of your life cast into oblivion as you make your way through just the main story. This is a JRPG, after all. And 50 hours is merely for those who decide to plough their way through to the end like a guided missile. Those looking to finish all the side quests and additional content will be playing Tales of Vesperia for much closer to 100 hours. 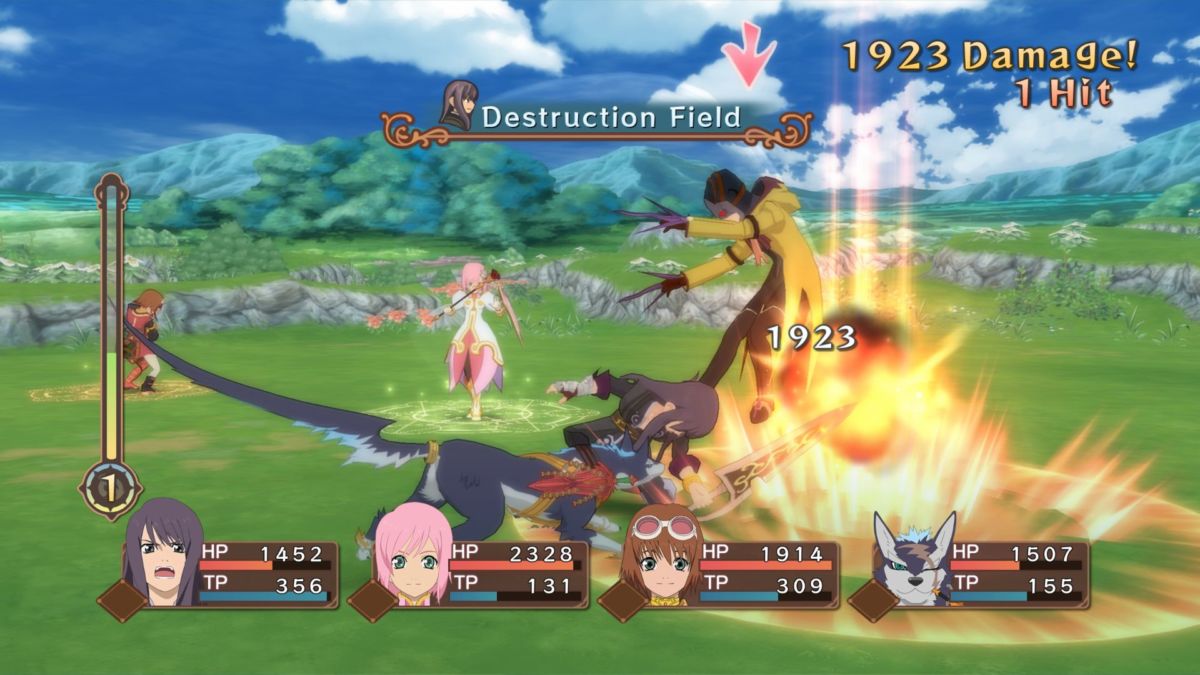 With a runtime like that, you might think that the game would start to get boring for a while, but aside from the combat, those feelings never surface. The characters, world, music, story and dialogue of Tales of Vesperia are filled with enough charm, humour and enchantment to keep you engaged all the way to the end.

As most JRPG stories do, things start out small before the odds get raised considerably as the fate of the world hangs in the balance. You follow Yuri Lowell, young swordsman and a rascal with a heart of gold as he tries to recover a stolen blastia (power) core from his neighbourhood. Along the way, he encounters a variety of lovable characters and becomes embroiled in a conspiracy that threatens all life on the planet.

That said, it’s not so much the narrative that keeps you coming back for more, but the evolving relationships between the core characters. Sure, there’s villains to smack and macguffins to collect, but watching the characters develop, evolve and interact with each other is what makes Tales of Vesperia so engaging.

As a whole, the main characters begin learn to work together in order to succeed in a fairly typical sort of “The Good Place was actually the friends we made along the way”, though there’s a few twists along the way that buck the particular trend. Still, being able to see an undeniable growth and development in every single party member from the beginning of the story to the end is possibly the game’s best part. 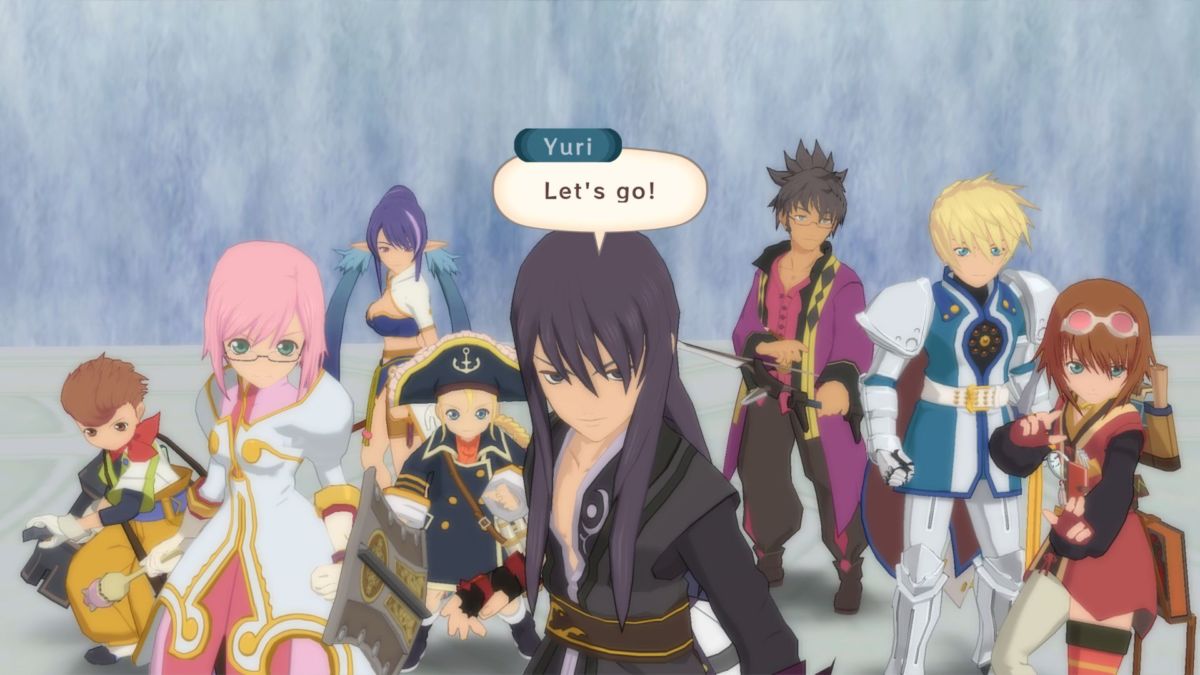 Being able to watch a character like Karol go from a nervous kid with low self-esteem issues to a competent and confident member of the team, or seeing Estelle blossom from a meek and naive member of high society into a hero filled with conviction and a determination to find her place in the world, is heartwarming to watch. Even the banter between characters like Rita and Raven provides plenty of entertainment.

That said, the cutesy characters and feelgood nature of the story doesn’t stop Tales of Vesperia from tackling more mature elements in its story. Without giving away too much, one of the key subplots during the second act concerns the ethics of committing an evil act to do something good, which adds some substance to the overall narrative and friction between the characters. Watching nine characters just be best mates with each other for 50+ hours would probably get boring, after all.

Between the cutscenes about friendships and morality, there’s the actual combat. From the outset, you’re given the choice between Semi-Auto and Manual controls, with the main difference being that jumping requires an extra button input on Semi-Auto, and AI will pilot your character towards the targeted enemy when you attack. For first-time players, Semi-Auto is definitely the way forward, though it’s worth giving Manual a try once you’re comfortable with the mechanics of the game.

The fighting itself is fairly basic to begin with, as the B button launches simple combos and the A button controls Artes, which are your special moves. For the majority of the game, your bread and butter will be hitting a basic combo followed by one of your Artes, but things definitely get more fancy later on with strategies, Over Limits, Fatal Strikes and Weapon Skills. 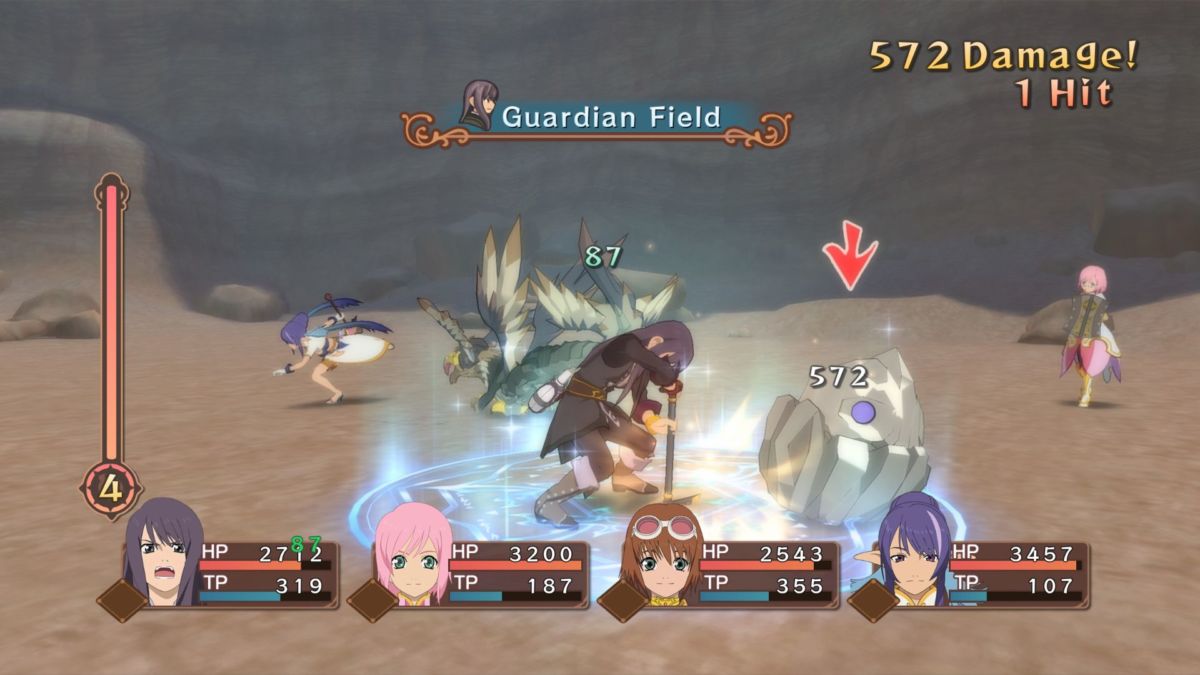 The strategy menu is for tinkering with the AI of individual party members, along with the ability to alter your battle formation. Basically, you can set who you want to be a healer, which enemies the characters focus on and how they behave when they’re low on health. You can also activate and deactivate certain Artes for characters, which is handy as the AI has no qualms using the most powerful healing spells after taking a slight graze.

Over Limits are simple enough, as they allow you to combo basic attacks and Artes freely for a limited time, and also let you use powerful Burst and Mystic Artes, making it a handy tool during difficult battles and against bosses. Nothing turns the tide of battle quicker than busting out your ultimate technique on an unsuspecting monster.

Fatal Strike is an ability that allows you to finish off an opponent in one hit, or at least do significant damage to a boss. Every Artes technique is assigned a red, green and blue attribute, and using moves of the same attribute consistently allows you to bust out a fatal strike. You can also chain Fatal Strikes by hitting more of the same Artes in quick succession for greater rewards, adding a bit more strategy to the combat.

Lastly, weapon skills are abilities tied to your weapons that you can learn by using the items for a few battles. Once learned, these skills can be assigned at any time so long as you have the skill points to use them. Skills can range from basic stat buffs to altering the nature of your Artes attacks, or even allowing you to increase your combo potential.

The usage of skills enhance the importance of weapons outside of which one does more damage, as their skills might be more useful when combined with another weapon, so it’s worth experimenting to find which skills work for you. Plus, you’d be learning skills while grinding normally anyway, which is always nice.

All these additions help make the combat feel robust, but unfortunately most of the fights tend to devolve into mashing your bread and butter combos until the rewards screen pops up. That’s fine for the first 30 or so hours, but the late game can begin to feel like a chore, which is made worse by the fact that the final act is when grinding almost becomes a necessity. The camera also becomes much more annoying as time goes on, often finding itself nestling behind the biggest enemy on the screen and generally being a pain in the ass.

As for the side activities, Tales of Vesperia tends to make you go a bit out of the way in order to actually find the optional side quests. It’s entirely possible to miss the majority of additional content during a regular playthrough, and the game doesn’t give you a way of keeping track of your progress during these quests. If you want to experience everything the game has to offer, you’ll either have to talk to everyone in every town every chance you get, or keep a guide handy. Both work.

One more glaring issue regards the port itself. As mentioned earlier, Tales of Vesperia: Definitive Edition is based on the Japanese only PS3 port which included new character Patty, but her inclusion is obviously shoehorned in. Her dialogue often doesn’t really engage with what other characters are saying, and in certain situations, new lines were recorded with different voice actors. It makes the game feel inconsistent.

These are only small issues in the grand scheme of things though. The way that Tales of Vesperia deals with side content practically guarantees there’s always something new to discover. Even the voice acting troubles fail to truly dampen the overall experience. Despite being around for a decade, Tales of Vesperia: Definitive Edition still manages to be worthwhile journey for old fans and new. If you’re looking for something expansive to fill the time between now and Kingdom Hearts 3, this game is for you.

MORE GAMING:
– 20 Best RPGs You Should Play
– 16 Biggest New Xbox One Games Of 2019 & Beyond
– Why I Hate The Silent Protagonist In JRPGs

Verdict
Though not the perfect JRPG experience, Tales of Vesperia: Definitive Edition still manages to stand shoulder to shoulder with modern offerings. A worthy purchase for new fans and veterans alike.
8