Ariana Grande’s Fortnite Skin Looks Like Something Out of Tekken 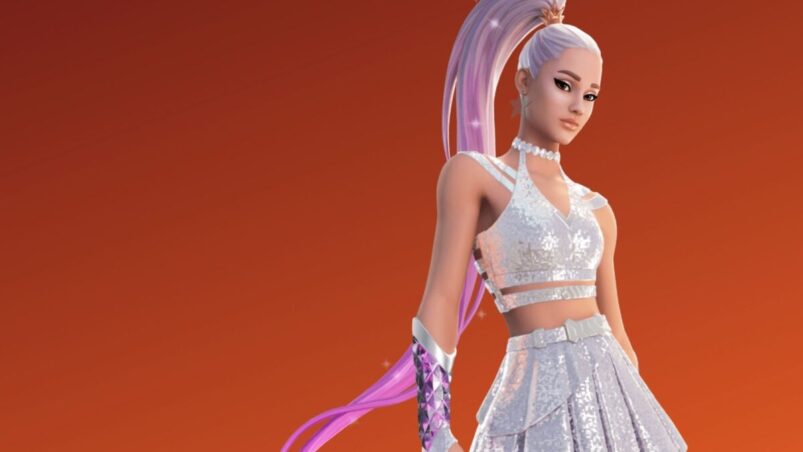 With the Rift Tour only a few days away, it looks like the star of it has been confirmed ahead of time. Ariana Grande will indeed be coming to Fortnite as a skin, and she looks like something out of a fighting game.

Over in France, ads have been popping up in the real world for the Rift Tour in Fortnite which people have been able to scan. The AR experience ends with a glimpse at the upcoming Ariana Grande skin in Fortnite, which you can check out courtesy of @iFireMonkey.

There’s even a trailer which suggests that Ariana Grande (or at least her avatar) will be performing within Fortnite as part of the Rift Tour.

Here’s everything you need to know about the Ariana Grande skin in Fortnite.

Here are all the appearances of Ariana Grande in that leaked prototype trailer! pic.twitter.com/90M9sp7vAY

The Ariana Grande skin in Fortnite will come with multiple styles, not just the one already revealed.

While this style has silver hair, there’s another style will feature Ariana with her natural hair and maybe also some of the incarnations from her music videos.

Here’s everything Ariana Grande that will be sold in the Item Shop, which includes the Back Bling based on her pig in real life.

As long as the ponytail is absolutely massive, it’ll be close to the real thing.

Ariana Grande’s Fortnite skin is due to launch alongside the Rift Tour, which starts from August 6th. Ariana Grande, meanwhile, will be in the Item Shop on August 4th, 2021.

There are various different times to watch the Rift Tour depending on your region:

Bear in mind that you’re able to attend any of these showings, the specific regions are just to make sure you have the best viewing experience and connection.

Ariana Grande’s Fortnite skin will be in the Icon Series. Most Icon skins cost 1500 V-Bucks (roughly $10/£12), but Ariana Grande actually costs more than usual at 2000 V-Bucks.

Every Icon skin also comes with its own bundle, and that’s also the case with Ariana. The Ariana Grande Bundle costs 2800 V-Bucks ($19.99/£15.99) with prices changing depending on what you already own within the set.

Here’s some of what will be in the Ariana Grande bundle, which includes a Back Bling and an Emote.

It’s unclear yet whether or not the Arian skin will return to the Item Shop after the event concludes, but based on the fact that Travis Scott’s skin has been missing for almost a whole year, don’t count on it.

Ahead of the Rift Tour kicking off, don’t forget to make a start on your challenges for some free rewards.

Head on over to fn.gg/RiftTour for more info on Ariana Grande in Fortnite.