What We Do In The Shadows: Season 1 REVIEW – A Gleefully Gory Slice Of Life

The TV version of Taika Waititi's vampire comedy sidesteps the usual problems with adaptations, and presents something quite charming. 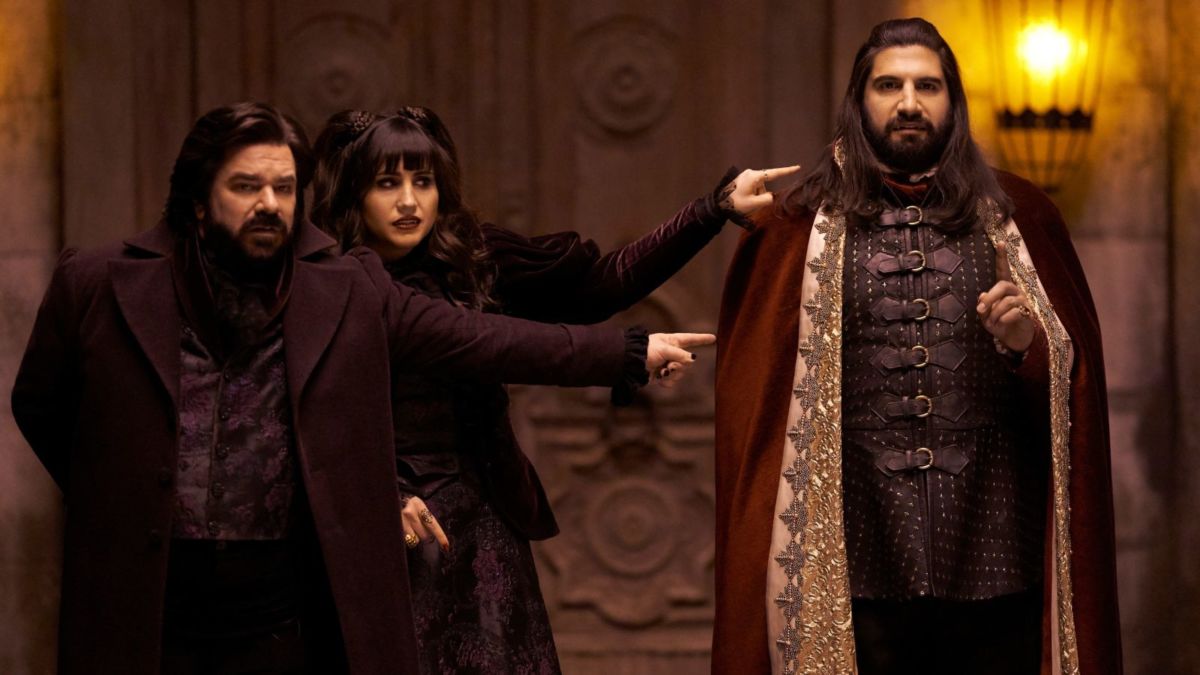 Home
TV
What We Do In The Shadows: Season 1 REVIEW – A Gleefully Gory Slice Of Life

When you’re dealing with a work like What We Do In The Shadows that’s been spun off from a movie, there’s two immediate and obvious questions: ‘how does it stack up against the original?’ and ‘is this just more of the same?’ As to the second, yes, yes it is. Which is hardly a bad thing. They’re no longer onscreen (except for one glorious cameo), but the film’s creators Taika Waititi and Jemaine Clement are still very involved, so if you liked the film and want more, here it is.

But then that brings us right back to the first question. And the comparison is largely one of the central cast of characters. While the film was set in Wellington and the show’s based in Staten Island, it’s not like being on opposite sides of the globe actually makes much difference. There’s not much gun-fighting or Lord of the Rings-filming in play, and without giveaway cultural traits like those, one major Anglophone metropolitan area is a lot like another.

Aptly, the central cast of the TV What We Do In The Shadows are the same but different. Matt Berry’s sleazy lothario is a clear analogue for Jemaine Clement’s, and it must be said Berry has more practice in that niche. What’s slightly shakier is Kayvan Novak’s Nandor the Relentless, who’s clearly meant to be the same kind of bumbling protagonist/leader-of-the-gang as Waititi played in the film, but doesn’t act as chummy host to the audience in the same way as he did, outsourcing that role in large part to his human familiar Guillermo (Harvey Guillén).

Guillermo serves in this role perfectly well, and Guillén puts in a fine performance, but he’s always straddling the line of becoming too pathetic a figure. Obviously that’s the joke, but the vampires, after all, are the main event here, and having one of them take the audience by the hand and lead them into this world simply made more sense.

It’s perhaps a little cruel to say, but Berry and Novak don’t have the best history in leading roles. Berry’s comedy vehicle Toast Of London had all the potential, but never seemed to know what it wanted to be. Meanwhile, Novak’s project Fonejacker kept his face offscreen, which was a necessity of the formula but still had him firmly out of the limelight. By contrast, they shone as co-stars in Garth Marenghi’s Darkplace and Four Lions respectively, so to have them taking the reins is a little like Dr Johnson’s tottering dog – the surprise is to see it done at all.

This isn’t, it must be said, an extended jab. They take the material and they make it funny, which as a description is lukewarm, but their performances can’t be faulted. Though it does say something that relative newcomer Natasia Demetriou fits right into the group, largely because she’s allowed to be as neurotic as the rest of them, rather than being relegated to the perpetual exasperation which is so often the fate of women in comedy.

The other major player here is Mark Proksch’s ‘energy vampire’, who’s always in very real danger of being just the one joke. There’s a careful art to creating deliberately boring content, but luckily, Proksch hits it dead on. It may be a hard act to pull off, but having a member of the gang who the others actively dislike is always fertile territory for yuks.

It’s also worth mentioning some of the minor roles. Doug Jones plays a tall and twisted creature of prosthetics, but for him that’s like blinking. The big one, though, is the episode which ropes in cameo appearances from a whole gang of established stars, doubtless a product of Waititi’s Hollywood connections after his success with Thor: Ragnarok. This could so easily have come off as the man throwing his weight around, but it’s fun and blithe enough that it works. Particularly as they’re all actors who have famously played vampires (Wesley Snipes, Danny Trejo) or who you could easily believe really are vampires (Paul Reubens, Tilda Swinton).

What We Do In The Shadows is another example of that specific kind of slice-of-life comedy that started with The Office. There’d been mockumentaries before that, like the genre-defining This Is Spinal Tap, but that was following the wacky antics of rockstars, where The Office was following ordinary people as they bumbled their way through ordinary situations.

This has evolved into the formula of (x) bumbling their way through ordinary situations, and despite a healthy amount of use it’s stayed relatively fresh. Trailer Park Boys had, well, trailer park boys. Norsemen used vikings, which added the lovely touch of touchy-feely Scandinavian workplace politics being juxtaposed with cutting off people’s heads. And What We Do In The Shadows, of course, uses vampires.

Although they were never quite the same cultural presence as zombies, with the Twilight franchise taking the edge off somewhat, everyone knows the rules for vampires. They fly around at night, they drink blood, they’ve got the laundry list of odd weaknesses (religious stuff, and also garlic). With these aspects firmly entrenched in the popular consciousness, the show wisely doesn’t rely on them too heavily, using them with a light touch if at all.

Despite the presence of a few running plotlines, Shadows is largely an episodic affair. With the group just as often breaking up to do their own things, at times it feels almost sketch-like. This is for the best: some of the plotlines, particularly the one about world domination, would probably have become too convoluted to stay funny quite quickly.

As refreshing as it is to see a light comedy that stays in its lane, rather than having pretensions to being some Tolkienesque saga building to an epic conclusion, Shadows does have another feature all-too-common in contemporary shows. Specifically, it brings up a more interesting plot point, which could have been a source of (comedic) tension throughout, in the last five minutes. One thinks of Dacre Montgomery’s character in Stranger Things, who was an empty-chair douche until the season finale established he had any sort of background or motivations other than looking ‘80s.

Still, this is in danger of contradicting the point I’m trying to make. What We Do In The Shadows is at its best when the overarcing plotlines are in the back seat, being used in service to the moment-to-moment riffing, rather than the other way round – and, hearteningly, this is invariably the case. The creators understand that the comedy is the main thing here, and don’t put the cart before the horse.

This, more than even the excellent performances, is the real strength of the show. Again, I point to the celebrity cameos in episode eight, and how easily that could have become ‘tee-hee, look at the famous people, don’t need to write any jokes here’, and how that temptation was staunchly and rightly resisted. You can say that some of the show is a bit obvious, but you can’t say it’s not funny.

Verdict
As a journalist I am contractually obliged to use the following phrases in this review: ‘comedy with bite’, ‘fangs for the memories’, ‘bloody good’ and ‘now bat’s vampiretainment’. Luckily for you, What We Do In The Shadows stays some way above these punny depths.
8
Cultured Vultures is a pop culture website established in 2013 covering all things gaming, movies, and more. We eat your words.
All The News On The Biggest Games