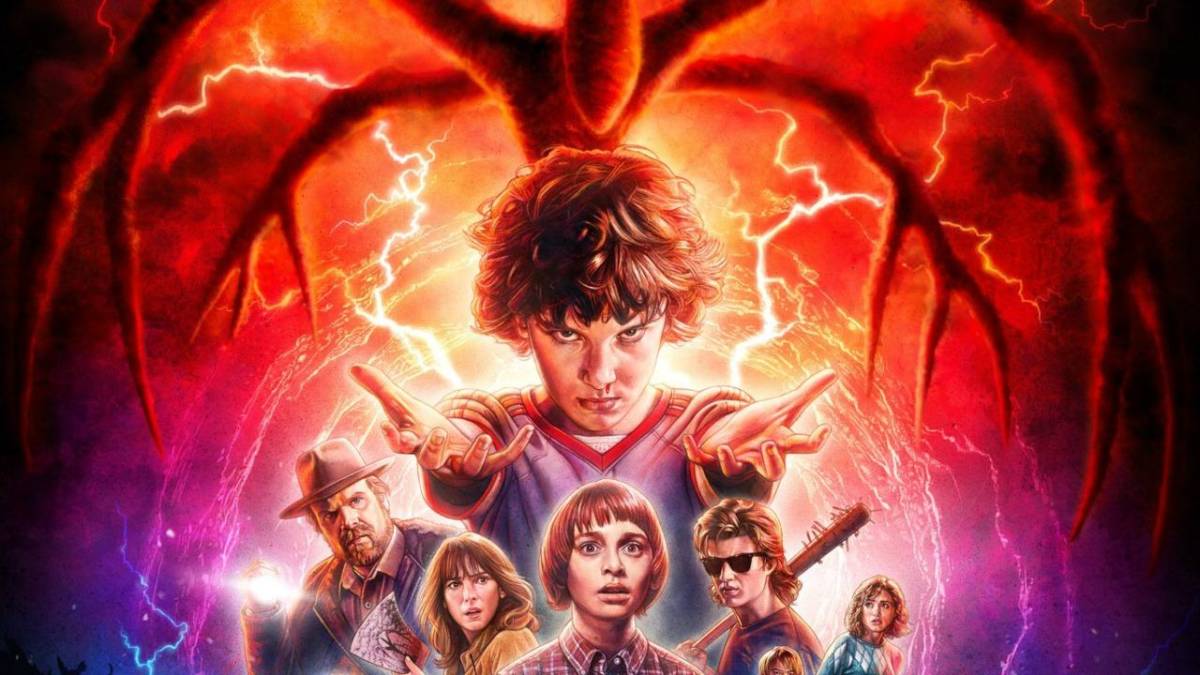 After a nine-hour Halloweekend binge, I had more than a few thoughts on the sophomore outing of Netflix’s retro sci-fi/horror sensation. When it premiered last year, Stranger Things was a surprise hit, tapping into nostalgia for the 80s and the science fiction films of that era. Season 2 picks up a year later, delving further into the world of weird lurking beneath the surface (literally) of the seemingly quaint town of Hawkins, Indiana.

First, I’ll say that this season lives up to the standard set by the first. It feels as if we never left Hawkins, with the events of this season a seamless extension of what we saw last year. Fans will be pleased with the resolution of some dangling plot threads, and with the natural growth in the character arcs of our protagonists. Limiting the season to nine episodes keeps the plotting tight and the pace consistent, though viewers will certainly be left wanting more.

The show is just as visually impressive as last season, if not moreso. The juxtaposition of small-town America with the world of the Upside Down continues to create a unique atmosphere that feels simultaneously foreign and familiar. New creatures and set pieces are natural extensions of the visual language developed previously. The special effects are subtle enough to spark curiosity without sacrificing mystery, maintaining the grounded yet ominous tone of the series.

With that said, the entire time I was watching, I couldn’t shake the feeling that something was missing.Yes, we got more of what made the first season so great. But more of the same can be as much a weakness as a strength. Stranger Things’ first season left an impression because it felt fresh. Or rather, it felt like a return to a type of storytelling that had been missing in recent years. The search for Will Byers had us biting our nails because we didn’t know where it was headed. The mythology of the Upside Down was captivating because it was unfamiliar, and the audience had to unravel its mysteries alongside the characters.

Unfortunately, that spirit of discovery and the world-building that accompanied it were lacking in Season 2. There were no new revelations about the Upside Down, nor were there real mysteries about what was happening there, despite it remaining as a focus of the series. There was never a point where I felt like I didn’t already understand where the season was headed, or where I wasn’t at least a couple of steps ahead of the characters.

Much of the conflict felt like a rehash. Will needs to be rescued from a sinister force, Joyce solves a mystery by decorating her house like a crazy person, the gang hunts for a monster, and Eleven deus ex machinas up a solution. The big threat of this season was too nebulous to feel dangerous, and too similar to last season’s to feel unique.The ultimate confrontation seems more like a prelude of things to come than a true finale, as evidenced by the season’s final scene.

In fact, where Season 1 felt like a self-contained story, much of Season 2 served as set-up for future seasons. That makes sense, of course. With the show’s success, the Duffer Brothers are free to tell a multi-season story without fear of it going unfinished. I’m all for seeding future events – it’s part of the nature of good episodic storytelling. But it has to done in a way that feels organic to the narrative at hand.

In this regard, one episode in particular sticks out like a sore thumb. Eleven’s side-plot in the season’s 7th episode, while important to the development of the character, was not at all integral to this season’s main conflict, and was haphazardly executed. The moral dilemma she faces feels forced, and the lesson she learns rushed. The characters she encounters ring hollow and come off more like cheesy 80s stereotypes then the faithful homages to the era that generally characterize the series. The whole episode, while not inherently bad, just feels like a weird tangent.

With all that said: I may have criticisms of Season 2’s plot, but where it really shines is in its characters and their relationships. Where I was left wanting in the addition of new mysteries, I was more than satisfied with the new members of the cast. Sean Astin plays Joyce’s new boyfriend, lovable nerd Bob “the Brain.” Bob’s optimism, innocence, and kindheartedness might have fallen flat if not for Astin’s genuine enthusiasm for the character. The inspiration of The Goonies on Stranger Things is obvious, and the appearance of former-Goonie Astin is a direct acknowledgment of that heritage.

Paul Reiser’s Dr. Owens places an unusually friendly face on the enigmatic government forces monitoring the Upside Down. He walks the line between friend and foe expertly, and we’re never quite sure if he’s on our heroes’ side or not until the end of the season. Brett Gelman steals every scene he’s in as eccentric conspiracy theorist Murray Bauman. He’s quickly become one of my favorite “that guy” actors, his smug, neurotic, and over-the-top delivery never failing to land a laugh. And skater-girl Max, played by newcomer Sadie Sink, is charmingly blunt, driving a wedge between the bickering boys through no fault of her own, all while insisting she doesn’t even want to be there.

This season, individual characters are given the opportunity to shine, split off into their own stories. Eleven spends much of the season pursuing her own goals and learning more about her past. Despite my issues with episode 7, this is an important journey for the character and a fantastic opportunity for actress Millie Bobby Brown, who expresses so much by saying so little. With the raw emotion behind her performance, it’s no wonder that her star is on the rise.

Next to Eleven, I’d argue that Gaten Matarazzo’s Dustin continues to be the breakout star of the series. Given ample screen time this season, Matarazzo demonstrates impeccable comedic timing and an infectious likability that had me mirroring his goofy grin. He plays awkwardness and confidence in equal measure, perfectly capturing the growing pains of adolescence.

The unlikely pairing of Dustin and Steve (Joe Keery) is by far the best match of the season. In a turn I certainly didn’t see coming, Steve was one of this season’s most likable characters. The in-over-his-head bravery he demonstrated at the end of the first season continues in a subversion of the typical bad-guy jock role that typified 80s movies. Max’s painfully cool sociopath of a step-brother Billy creates a perfect foil for Steve, painting him as the sympathetic underdog instead of the bully. Like many, I ended Season 1 disappointed that Nancy chose Steve over Jonathan. But by the end of Season 2, I’m honestly not sure where I stand on the love triangle – a testament to the show’s well-written and realistic relationships.

Stranger Things has been lauded for its authentic depiction of growing up in the 1980s. I may be taking a major leap across genres here, but it feels to me very much a spiritual successor to Freaks and Geeks. Both center around a group of teenage outcasts in the 80s. There are the younger, nerdy “geeks,” like Mike and his friends, and the older “freaks,” like Jonathan. School dances and Halloween-costumed bullies form a shared language of nostalgia between the two shows. James Franco and Linda Cardellini were hardly battling the Demogorgon, but the settings, characters, and coming-of-age themes are strikingly similar. Freaks and Geeks was too far ahead of its time when it was canceled in 2000, but seeing how well Stranger Things works, I’m all but convinced it would have found similar success in the age of Netflix.

Verdict
Stranger Things' second season contains nine hours of compelling television that recaptures the spirit of what people loved about the series. Its similarity to Season 1 is a mark in favor of its quality, but against the continued improvement of the show. If Stranger Things' first season breathed new life into 80s sci-fi/horror, Season 2 kept air in its lungs. But despite a lack of new worlds to explore, the characters doing the exploring are better than ever.
7.5
Cultured Vultures is a pop culture website established in 2013 covering all things gaming, movies, and more. We eat your words.
All The News On The Biggest Games