"Ergo, concordantly, vis-a-vis. You know what? I have no idea what the hell I'm saying. I just thought it would make me sound cool." 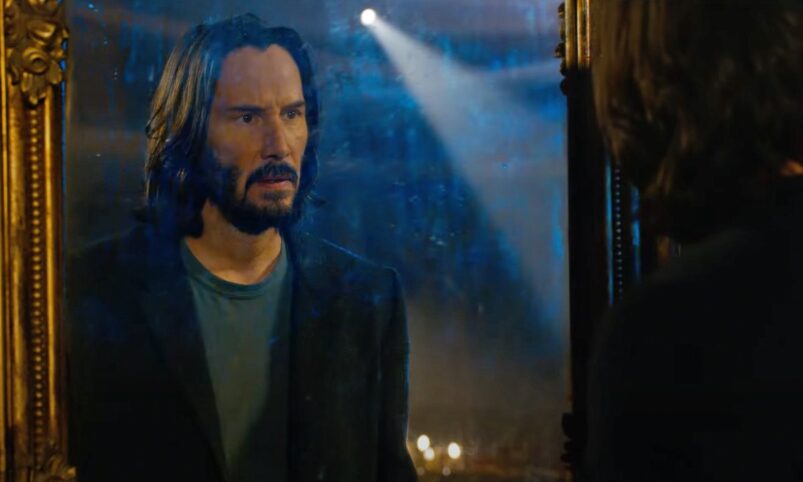 2021 is truly the year of nostalgia. We got a Mortal Kombat reboot, Denis Villeneuve taking his own stab at Dune, and for Christmas this year, we’re getting a fourth Matrix film after 18 years. When the first official trailer for the movie released last week, us 90s peeps went crazy with excitement. Even after the fourth movie was announced to be in production, I had a hard time believing this would actually happen, but hey – here we are.

When I first read the news of there being a continuation of The Matrix series, I was a tad confused. Wasn’t the story done? Why were some of these characters coming back into the picture again? Well, technically, Neo didn’t die die, we saw the machines unplugging him from the matrix and he was taken away by them at the end of the third movie. In The Matrix Online, Morpheus tried to get the machines to return Neo’s body to him, but to no avail. This implies that they still had his body, which means they could either fix him and plug him back in, or use his genetic material to clone him and bring him back in. This might explain why we find him resurrected in this fourth film.

Also, there’s a blink-and-you-miss-it glimpse of Neo in the pods in the trailer, which helps cement this idea. In the second movie, The Architect explained to Neo that he is “the eventuality of an anomaly” that he was unable to eliminate, the 6th reiteration to be exact. However, because Neo chose Trinity instead of returning to the source, he deviated from the set path that had been always laid out – the cycle broken.

Usually, the Prime Program is reinserted back into the source to reboot the matrix, but this time, it was done independently of Neo. Because he negotiated for humans to be allowed to reject the Matrix if they wanted to, rejections were no longer considered anomalies, so the programming of the Matrix was not threatened by these anomalies anymore. Thus, the best revenge for the machines (since he did deny them the upper hand) would be to keep him in the Matrix, completely numb to the reality of things, so he can’t wreak any more havoc and completely exempt from a choice he fought for everyone to have.

Watching the trailer play out, it’s almost as if Neo is in the scenario that Cypher wished for himself – rich and maybe even an actor (could Jonathan Groff be playing his ‘agent’?), with his memory wiped. There is a moment in the trailer where we see images from the Matrix films on a screen, hinting that the Matrix films exist in Neo’s reality. What better way to convince Neo of his current reality than to suggest that he is the actor in said films? When he’s speaking to his therapist, played creepily by Neil Patrick Harris, he mentions these dreams he keeps having, and asks if he’s crazy. These are obviously visions, which he has had before, an indicator that he still possesses the powers of The One. However, to the current Neo who remembers nothing, it would be akin to losing one’s mind.

It’s blatantly obvious that Harris is dressed in shades of blue, a reference to the blue pill that keeps one illusive and bound to the Matrix, a pill he prescribes to Neo in order to keep him docile. Once again, the machines are missing the point. Keeping things cushy for Neo may have made him more pliant, but because they’ve removed the aspect of choice for him, that’s resulted in this state of ennui we see him in. Neo knows that something is off – he notices the glitch of the birds and he’s the only one to look up when everyone else is so hooked to their phone screens.

This is why we get that scene of him in the bathtub, with a rubber ducky on his head. When a programmer is trying to debug his code, he works through each line of code, and explains it to himself like how he would to a rubber duck – any inanimate object would work, actually. In his previous life in the matrix, Neo worked as a computer programmer for the MetaCortex software company, so this symbol makes sense. He knows that something is off, and he’s trying to work through it.

So where does Trinity come in? After all, she definitely died in The Matrix Revolutions, well, at least that’s what we think. The machines could have repaired her or cloned her, much like they did Neo, and plugged her back into the Matrix – there is an image of her emerging from the pods as well. In interviews last year, Reeves mentioned that this fourth film is a love story, calling it “inspiring”, so I don’t think they are using Trinity’s image to trick Neo – she is very much the real thing.

As to why they brought her back, in the final chapters of The Matrix Online, it was revealed both Trinity and Neo were actually the culmination of decades of machine research into perfectly translating human DNA into machine code, which allows the machines to transfer their digital minds into physical bodies instead of mechanical androids. While this fourth movie won’t be an exact rehash of events that transpired in the game, director Lana Wachowski might be fusing things a little in order to make things that happened in the game more canon.

It seems that both Neo and Trinity’s Residual Self Image (RSI) differs from their own. In the trailer, there’s a point where Neo glances into the mirror and sees this much older man. As for Trinity,  she screams and you see the image of another woman projected, along with her own. As we saw in the third movie, The Oracle explained that The Merovingian got the termination codes to destroy her outer shell, but she was able to move her ‘consciousness’ to a new body. This would explain why both Neo and Trinity have outer shells that look nothing like them as this would be the best way to keep them apart, so even if they do end up meeting they wouldn’t recognise each other.

But as we saw from the trailer, this is a fool’s errand – the pair always return to each other. The main question is: what are they up against? And what is Morpheus’ role in all this? Laurence Fishburne wasn’t asked to resume his role as Morpheus in this fourth movie. The reason for this could be The Matrix Online, a game space where Morpheus may have died. However, this isn’t exactly confirmed since he does show up later on to broadcast messages about Neo. It’s also plausible that these transmissions are being made by a Morpheus simulacrum, by using remnants of Morpheus’ RSI left in the system. This could be a similar plotline for the film, where the RSI of a younger Morpheus is conjured so they could manipulate Neo.

It’s jarring that his attire in the trailer (at the part where he offers Neo the choice between the red and blue pill) is similar to The Merovingian’s clothing in the third film, and the red tones carry over to his outfit when he spars with Neo in the dojo. Coincidence? It’s all guesswork at this point. Lambert Wilson did mention that The Merovingian is part of the current script, so he could be the antagonist here. In the second film, the man yammers on about causality, and dismisses the idea of choice, calling it an illusion. Just like The Architect, he cannot see beyond his own rules and programming.

Evidently, the time of peace between humans and machines is over, and so, with whatever moves the machines are planning to make, they need to make sure that Neo has no capacity to intervene. But he will, because Trinity will bring him out of it – they will save each other like they always do, and the rest of humanity while they’re at it.

READ NEXT: The Best Post-Apocalyptic Movies You Should Watch