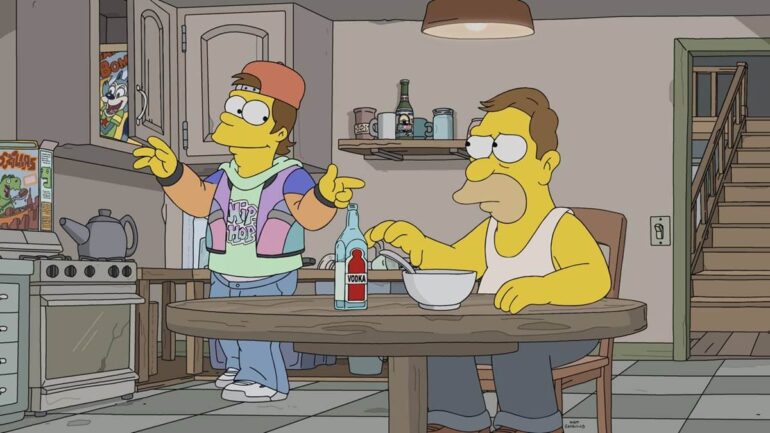 The recent episode of The Simpsons “Do Pizza Bots Dream of Electric Guitars” flashed back to Homer Simpson’s youth in the 1990s, casting the ultimate boomer patriarch as a ’90s kid, wearing a backwards baseball cap and aspiring to become a DJ. Of all the parts of that which might be criticised, what the fans have leapt upon is the retroactive continuity.

The fact is, we knew Homer in the ’90s, and know what he was doing then – namely, the various adventures of the first ten seasons of The Simpsons. It flies in the face of not just the show’s own established reality, but of the fans’ memories. However, the unstoppable force of the passage of time has reacted in strange ways with the immovable object of the Simpsons family staying the same age no matter what.

Despite the nature of social media, most of the fan criticism was in the form of wry observation rather than frothing rage. ‘Lavender Blue’ suggested that it would have been the work of a moment to simply not do this:

Meanwhile, ‘Tina the tank engine’ had noticed that the episode had failed to purge itself of references to the established timeline, suggesting some kind of paradox:

@TheSimpsons found this in your new episode … did a wizard do it??? #TheSimpsons #Simpsons #ComicBookGuy pic.twitter.com/Pxf6ghc3IO

James A. Swierzbin noted that the ’90s Homer was more than a little reminscent of the corporate-friendly idea of cool which was so popular at the time, and which The Simpsons had gleefully lampooned once upon a time:

Continuity Alert: Sunday's @TheSimpsons playfully re-interprets the show's timeline to allow Homer to be a teenager in the early '90s — The Simpsons is a 32-year-old series where the characters do not age, so the "canon" must be elastic / contradictory / silly. pic.twitter.com/GTOpOHUa0w

Although eventually, worn down by a tiresome twitter battle, even Selman admitted he would rather reboot the whole thing, possibly so as to never have to have any more of these interminable arguments about canon with the hardcore fans:

The Simpsons is well-known for its lackadaisical relationship with canon – most notably, there’s the Halloween specials, quite explicitly not meant to be ‘real’ in the same way as the rest of the show, since they have the characters becoming vampires or chopping each other to bits. However, this is also not the show’s first foray into messing with its own timeline. To quote myself, on this very organ, not too long ago:

Originally Homer and Marge were in high school and first dated in the 1970s, then married and had children through the 1980s. Then, a 2008 episode screwed with the chronology to place them as a young couple in the 1990s, against the backdrop of Homer’s Nirvana cover band – since otherwise they should have been approaching their sixties. If the show carries on like this, before long Homer and Marge will be millennials, yammering about Pokemon and explaining what a dial-up modem sounded like to their disaffected children.

The floating timeline, straightforwardly, is not a new development. Perhaps having The Simpsons start to overlap its own timeline laid the internal contradictions a bit too bare, but again, this had been done before. And the fans getting irate over changes to the canon dates all the way back to the golden era, when the season 9 episode “The Principal and the Pauper” revealed that Principal Skinner was and had always been an impostor.

A cross-section of usenet reviews of “The Principal and the Pauper” from the time, although not universally negative,  describe it as ‘plain stupid’, ‘pointless’, ‘a waste of tape’, ‘a total break with continuity’ (sound familiar?), and even go so far as to celebrate that this was writer Ken Keeler’s last episode. Perhaps most tellingly, the archivist who collected these noted ‘they really
know how to annoy a loyal fan, don’t they?’ And that was twenty-four years ago. The writing staff know what kind of developments will create light and heat.

A cynic might suggest that this – and The Simpsons’ major headline from last month, when they were Frankensteining together old clips of Marcia Wallace – was done purely to seek attention. On one level, the numbers don’t bear this out. Neither “Do Pizza Bots Dream of Electric Guitars” nor “Diary Queen” achieved any breakthrough in viewing figures, both hovering at around 1.43 million US viewers – a paltry shadow of the most recent Halloween special, which drew nearly 5 million.

However, both did create ripples in the wider culture in a way that the 31st Halloween special didn’t. Both saw a lot of engagement in the twittersphere (which is like real life, but worse), and got articles written about them, creating a functional symbiotic relationship between the show and the press – fans of the show give the news sites clicks, readers of the news sites might watch the show, and both benefit. Hello, Cultured Vultures readers – how you doing today? Stick around, there’s lots more content.

READ MORE: Get Off The Stage, Sweetheart: The Ballad of Ralph Wiggum