The Red Strings Club proves that the Switch is one of the best console choices for indie games. 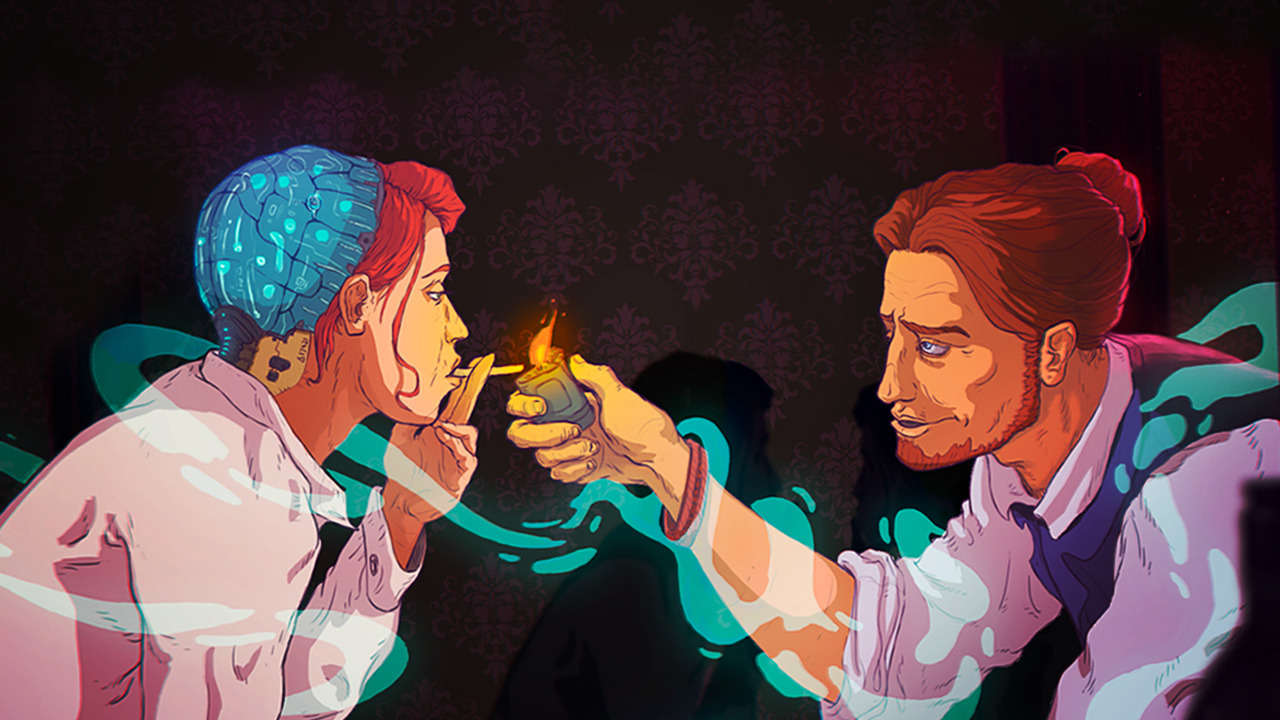 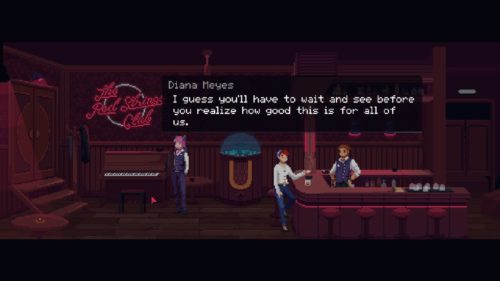 Blade Runner is one of the most influential movies of all time. There’s been a huge amount of films, books, art and, of course, video games that have been influenced by the Ridley Scott sci-fi classic, with Blade Runner and its brethren helping to shape the subgenre known as ‘cyberpunk’. The Red Strings Club too has taken inspiration from the cyberpunk genre, and it’s damn proud of it.

Recently, people have been talking more and more about the loss of AAA single player gaming. Well, as long as indie gaming is producing gems like The Red Strings Club, I will be happy.

The Red Strings Club initially looks like a generic sci-fi point and click title, the kind of game that we’ve seen before over the past few years, but delve a little deeper and you’ll find there’s more to it.

The Red Strings Club begins in a bar located in a cyberpunk inspired city. Donovan is our resident bar-keep, but is also an information broker. He is joined in the bar by his piano playing partner, a hacker name Brandeis. We quickly learn that Donovan has a particular skill: making drinks to get the most information possible from his patrons. 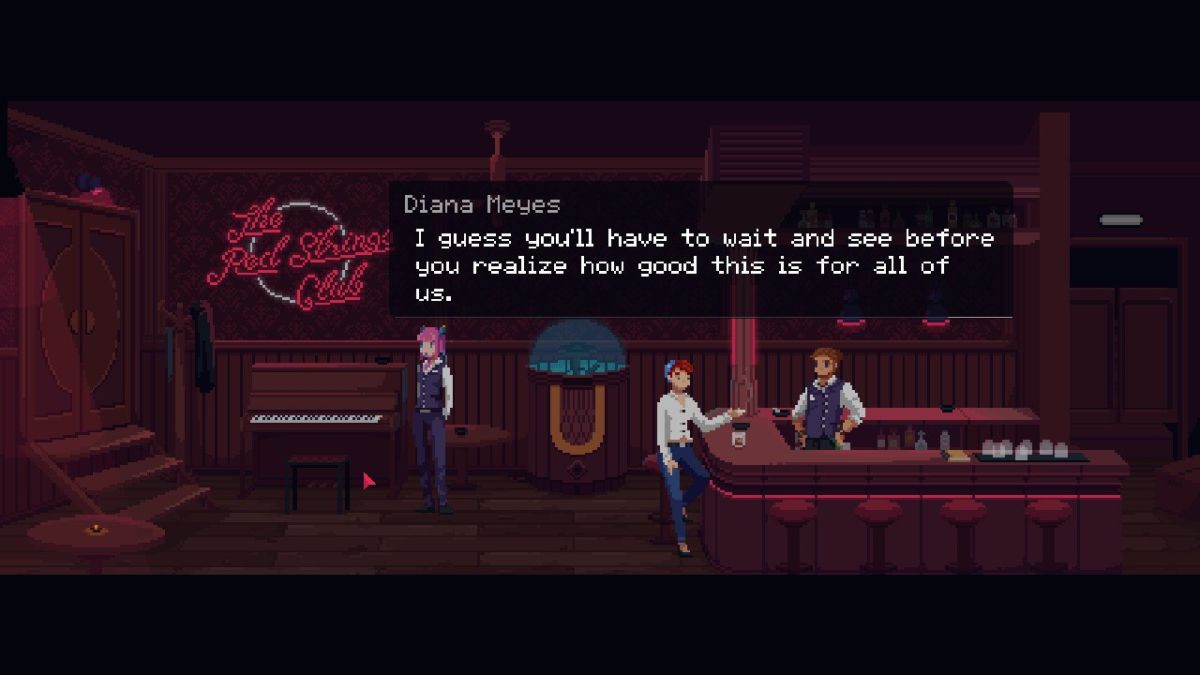 Sequences which could be described as mini games see Donovan pouring and mixing drinks to produce various emotional responses from his customer. Some drinks might push patrons toward being scared, others toward being comfortable. The more you pour the further it pushes them; ice can also be added to influence the customer, and later on cocktails can be made to mix effects.

Pushing people towards certain emotional responses means you can gather various pieces of information which then come into play during the final section of the game. The pouring drinks mechanic is pretty easy to work out, it’s simply a matter of using the A button and analog stick to pick up and pour each liquor. An on screen indicator will tell you when you’ve poured enough.

The second ‘mini-game’ you’ll come across in The Red Strings Club is pottery, and no, you’ve not misread that. You’ll take control of android Akara-184, and your role is to create modules that help people overcome issues in their lives. If someone wants more social media followers, then either make a module to make them more charismatic, or make a module to make them not care about the followers. 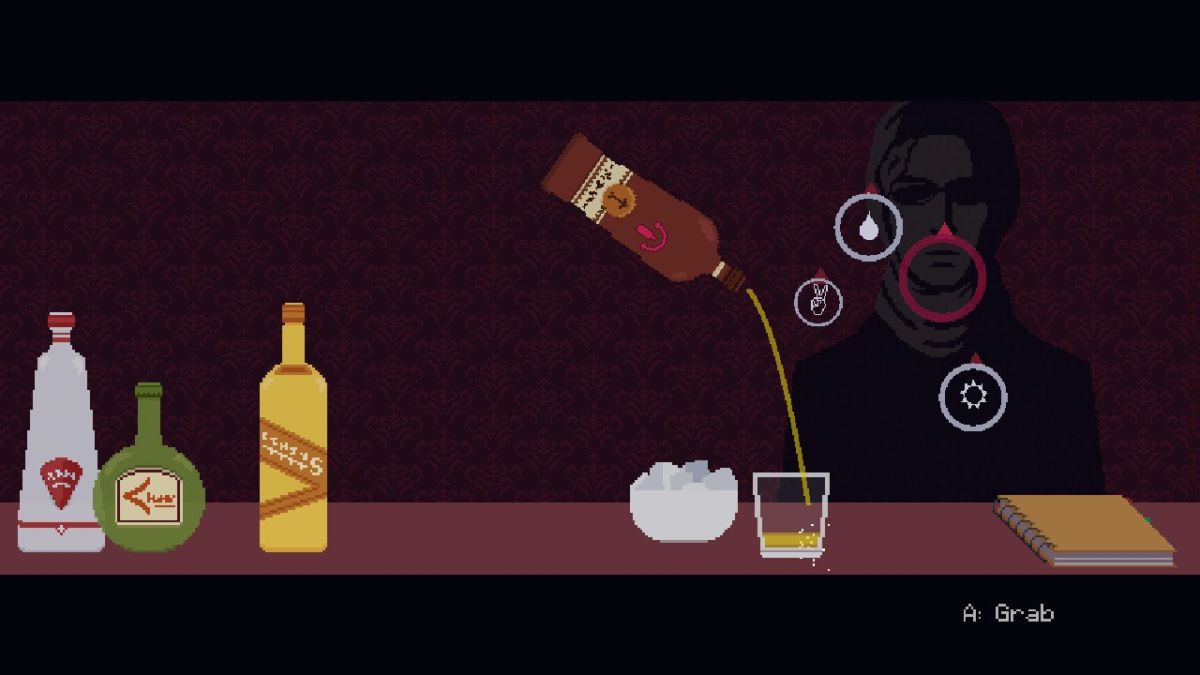 These modules are made using the game’s ‘pottery’ mechanic. Pressing A spins the pottery disk, and you have three tools to carve out these modules from a piece of material. Each tool is a different shape, allowing you to carve out each design in accordance to its template. It’s an interesting mechanic, even if it is a little uneven.

The last section of the game sees you take control of Brandeis as he attempts to infiltrate the Supercontinent Ltd corporation, and as mentioned earlier, you’ll need to use all the information that you’ve gathered so far to get to the bottom of what’s going on. This is an interesting section of gameplay; probably the least interesting in terms of design, but very well written.

The visuals of The Red Strings Club are very similar in the style to that of games like Technobabylon and Gemini Rue. Very pretty and beautifully stylized, they manage to capture the mood of the cyberpunk genre wonderfully; these retro stylings work so well. The soundtrack is a great piece of background work, managing to set the scene for every part of the game, while never being overbearing. 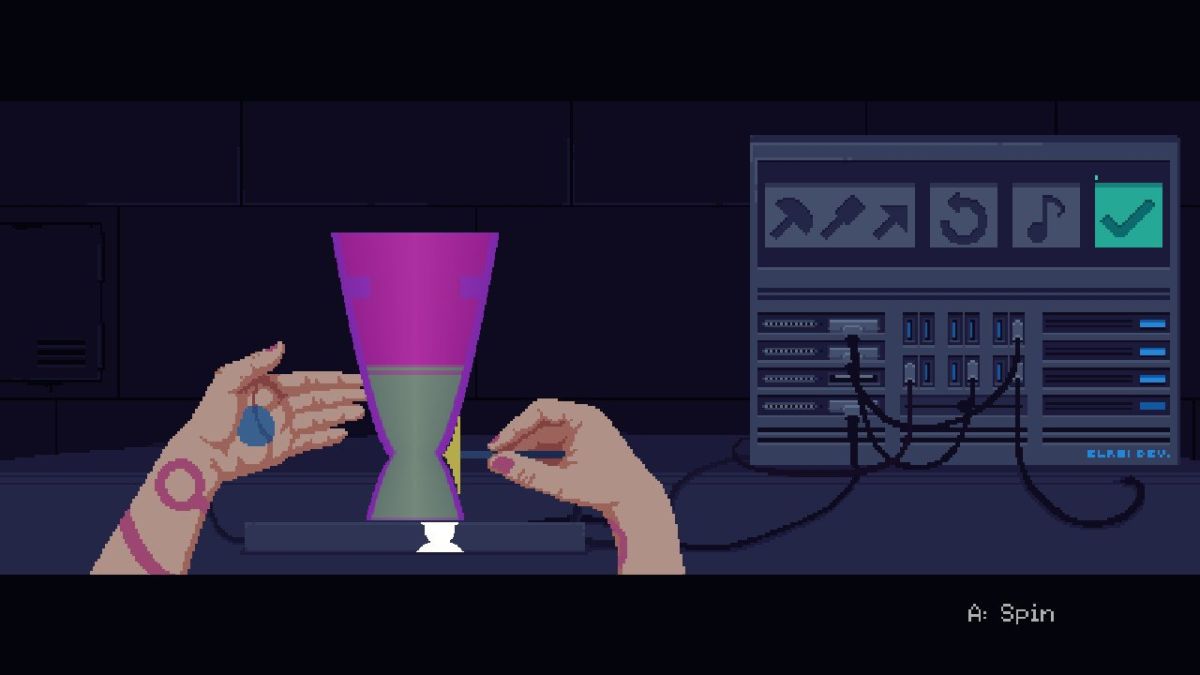 But things aren’t totally perfect in this port. The Switch might seem like the best choice with its touchscreen, but the whole thing feels a little poorly designed. The Red Strings Club allows you to move the cursor around the screen with the D-pad or analog stick, or you can simply tap the screen. But the mechanics of the mini-games mean you’ll be switching between these methods of gameplay, and each time it caught me out.

The bartending and pottery games are better played with the analog stick or D-pad and buttons, but the actual point and click style sections are better played with the touchscreen. The game will frequently give you list-style menus, which I automatically assumed would be navigated with the up/down motion of the analog stick. But that is not the case, they have to be navigated with the cursor or touchscreen. The PC control scheme was also flawed, but feels more natural than this version.

I would’ve loved to see this game with a full cast recording. I know it’s made by a small developer, but The Red Strings Club is so well written that I felt like I wanted more from it once I’d finished. It’s not a big game, with many playthroughs coming in at just over the three hour mark, but I would’ve liked to have seen more variety in each section of the game.

The Red Strings Club is an exceptionally written game, and a very lovingly made one to boot. Its art and design feel pretty much brilliantly realised, and leave you wanting to see more of the Red Strings’ world. It’s not perfect, and is slightly hobbled by a slightly imperfect port to the Switch, but it is an indie darling if ever I saw one, and it is one that’ll have a huge fan following. For those who love indie point and click titles but want something a little different, then The Red Strings Club is a must.

Verdict
The Red Strings Club proves that the Switch is one of the best console choices for indie games, but can’t quite match its PC cousin.
7.5