The Simpsons Revives Mrs. Krabappel As Tribute To The Late Marcia Wallace

But is this an appropriate tribute, or is re-using a deceased actor's material in bad taste? 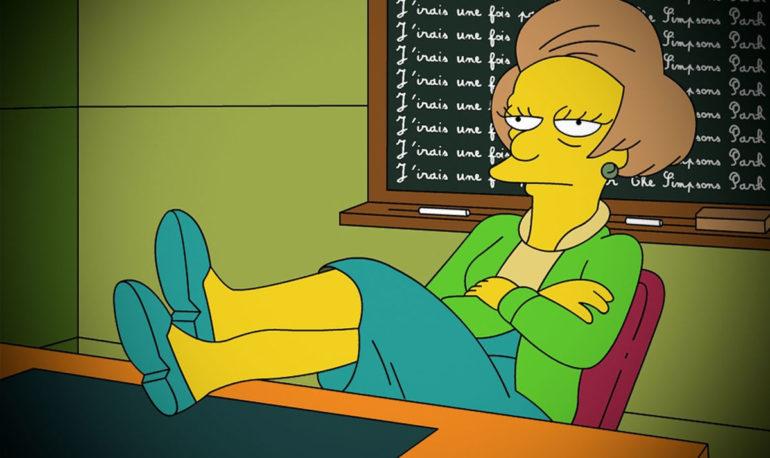 The most recent episode of venerable cartoon The Simpsons sees Bart discover the diary of his old teacher Mrs. Krabappel – a character who was retired when spiky-haired voice actor Marcia Wallace passed away. The episode, ‘Diary Queen’ (a pun on ice-cream chain ‘Dairy Queen’ which worked too well, with some press outlets accidentally calling it just that), allegedly ‘pays tribute’ to the late actress, by re-using some of Wallace’s old lines within a new script.

There are 𝓼𝓸𝓶𝓮 advantages to being the teacher's pet.

This is at best farcical, and at worst ghoulish.

Simpsons executive producer Al Jean has specified that Mrs. Krabappel’s return to the show was done with the permission of the Wallace estate, and that “this will be her last appearance…we just wanted to sort of send the character off properly, in a way that I think isn’t trying to be exploitive (sic).” You may make up your own mind on that last point.

This reporter has written extensively and somewhat shrilly about the slow decline of The Simpsons before, but when Wallace died in 2013, the show was at least respectful – making that week’s chalkboard gag “We’ll really miss you, Mrs. K”, and not having the character dramatically killed off onscreen, as they had once with Maggie Roswell’s character Maude Flanders after Roswell left the show over a pay dispute. This was following an established course of action: after the tragic death of Phil Hartman, the Hartman-voiced Lionel Hutz and Troy McClure were retired for good, even though they were among the strongest of the show’s ancillary characters.

Somewhat more tactlessly, though, The Simpsons did eventually have Lunchlady Doris return after a ten-year interval. That character was originally voiced by Doris Grau, who had worked on the show as both a voice actor and a script supervisor – which led some to suggest that her passing weakened the show in more ways than one.

But who would come up with such an idea?

Perhaps most damning is that South Park once ‘brought back’ Isaac Hayes in the very same way after Hayes left that show in protest of their mockery of definitely-not-a-cult Scientology, chopping together old lines from the archives to create new material. The episode depicted Hayes’s character Chef having been brainwashed into becoming a paedophile, with his previous voice work spliced together deliberately badly. When your ‘heartfelt tribute’ is the same thing as South Park mocking a fringe religious group in a particularly vulgar way, something is badly wrong.

At the risk of pointing a finger, Disney do seem to be making a habit of not letting people stay dead. Since acquiring the Star Wars franchise, they have brought back both Carrie Fisher and Peter Cushing as uncanny-looking creatures of CGI, as well as de-aging Mark Hamill in the manner of The Irishman. In 2017, Disney acquired the rights to The Simpsons when they bought up FOX, and – well, we can see what’s happened now.