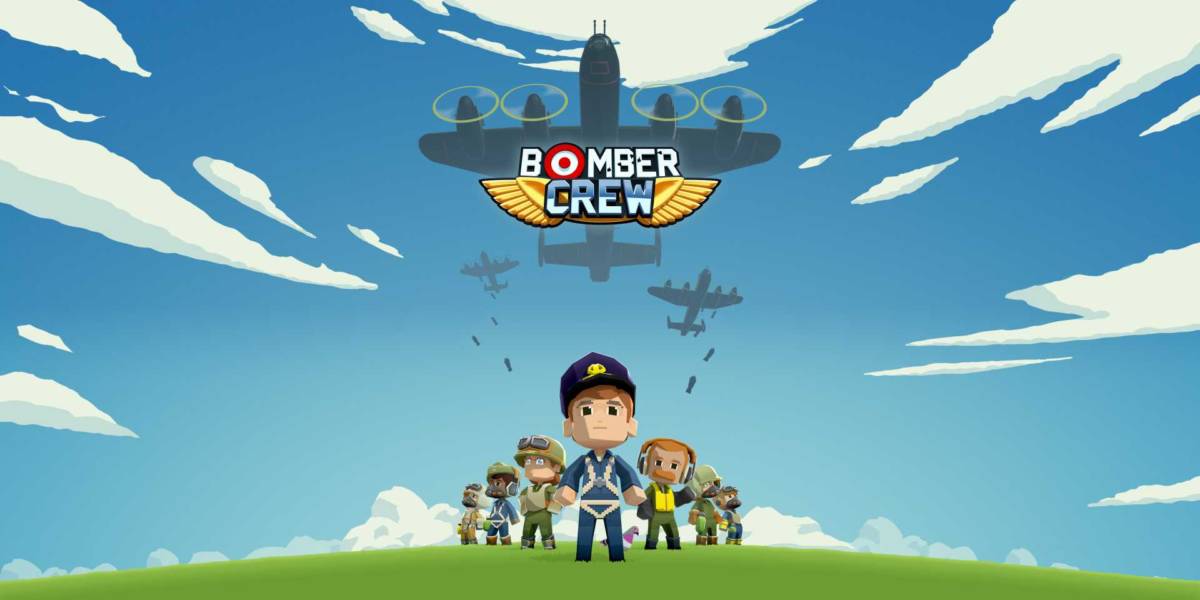 I have always been drawn to games that offer a way too in-depth presentation of war. Hex counters with NATO symbols, archaic UIs, and obtuse mechanics plague the sub genre of games I refer to as “grognard games”. Grog games are often hard to get into for new players due to their mysterious UIs and vague mechanics, but for those who can put up with games poorly communicating their information they offer experiences that are very hard to match in other genres. These games are often so complex they model the individual bullets in a soldier’s magazine and require you to plan your logistics routes. Rarely, though, are these games designed to communicate with the player what they’re doing. It often feels like grog games have a hostile approach to the player with their vague feedback and often high prices.

Bomber Crew is affected by none of that. This is a wonderful sim game that has you managing a Royal Air Force bomber doing runs against Nazi Germany; anyone who has played FTL will be familiar with the concept. You have your overarching mission, but to complete it you are tasked with juggling so many other things aboard the plane that could go wrong. If you send an engineer to go out on a wing to fix an engine but then see a German fighter coming to light you up you may have to spin; throwing that soldier off your plane but saving the lives of everyone else on board.

Gameplay in Bomber Crew can be simplified to the old analogy of spinning plates. You have so many disasters happening that you have to solve using a limited amount of tools. Though that makes it sound overly simplistic, the game’s complexity arises when several of these disasters strike at once and you must solve them using your limited crew. One of the first issues I ran into was deciding if I should take a gunner off of his turret to fight fires or to allow him to continue to shoot down enemy fighters. I knew if I didn’t put out the fires the plane would be in even more trouble, but if I took the gunner off then I’d be vulnerable to even more strafing runs. So I started to experiment with pulling my pilot out of his seat to fight the fires while the gunner continued to shoot. While this was effective at first, I soon started to wonder why I was losing altitude so quickly – the plane had entered a nose dive with no one at the stick! Before my pilot could make it back to his seat that bomber smashed into the ground, killing everyone inside.

Well, maybe for the next plane I’ll try moving the gunner off his turret again.

Bomber Crew asks you to find the best solution to its dynamic puzzles. The game is not asking for you to have an encyclopedic knowledge of how the Royal Air Force used bombers during the air campaign of World War Two, but instead takes an anachronistic approach to allow the player to have fun and experiment with what they think will be the best solution for their own bomber. After I got some more gear and crewmen leveled up, I didn’t have to worry about bombers as much because I could fly in the high altitude and not have to worry about them until I made my dive for an attack.

Most grog games sacrifice what is fun for the sake of historical accuracy. This leaves many games feeling compromised. Sure the game adheres to what happened, yet those restrictions severely limit how much fun and agency a player can have in a game. Bomber Crew does not put historical limits on what is capable the game is very clearly designed to be fun first with the historical aspect supplementing that.

I am sure many faithful to the grog style of game will be put off by the cute graphics and ahistorical things the game does. Grog games pride themselves by adhering to history and detail as much as possible, sometimes to an uncomfortable point. Bomber Crew is deceptive though, the game is hard and the mechanics are deep. The graphics may be pleasant, but there is horror as your bomber burns with little to no fuel and you have to attempt a landing in the shallows of an ocean.

Bomber Crew is one of the few games where the use of roguelike elements makes sense for the gameplay. When a plane or crew is destroyed, that is the end of their story. It gives the characters a sense of meaning as they level up; being able to customize the bomber itself gives the plane a personality. With custom decals, paint jobs, and giving it it’s own name your bomber begins to take on a personality from mission to mission. Maybe a certain bomber refuses to go down but the crew keeps dying. Or another has had the same crew but hasn’t once been hit, so then when things do go wrong the personal story you have to that plane feels rewarding. You are creating legends of the air as much as you are completing missions in this game.

Most memorable of all my crews and planes was the “Nimble Jack”. The Nimble Jack had survived over twelve missions and had scored a good dozen or so kills on fighters and even a few German Aces. Each objective Nimble Jack took on seemed to be more impossible than the last. Attack an airfield in midday that is covered by multiple AA-guns, go deep into enemy territory while the bomber is still broken to do a daring strike on a German base preparing for another attack. Though the Jack was able to complete all these missions, it came at the grisly cost of killing the crew inside it for nearly every mission. Gunners were turned into pulp, engineers flung off of wings in desperate dives to dodge flak fire, and co-pilots were thrown to the earth without a parachute in order to save some of the more senior members of the team.

The only one who saw the Nimble through its entire career was pilot Earl MacDonald. The red haired pilot was stalwart in his devotion to the aircraft, managing to land even when the landing gear had been sheared off by fighter fire and was responsible for the one mission where the entire crew survived. We were on the way back to base after a particularly brutal assault when from the clouds came a German Ace who wanted vengeance for the strike. Gunners scrambled to try and get a bead on him but were too slow. Traces ripped through the cabin and wings, badly damaging the engines. What was supposed to be a calm victory ride home soon became a perilous dive over the English Channel. MacDonald calmly nosed the plane down, bracing the plane for what he had in mind. As we neared the roaring sea Earl pulled the nose up. The plane began to rise and slow. To everyone’s disbelief, Earl had managed to land in the shallows off the coast of England. All souls on board were safe and accounted. Even more important was the Nimble lived to fly over German skies another day.

None of that story was explicit or scripted. All the emotion I got from the characters and planes were from the customization options and dynamic gameplay that Bomber Crew does so spectacularly well. In a game with what some will dismiss as cutesy graphics, there are real consequences and choices that will affect which of your crew lives and dies. Do you let the new recruit take the parachute or give it to your veteran gunner who can engage fighters even quicker? Of course those playing to beat the game or through the mechanics will give it to the higher ranking soldier every time, but those who get caught up in the emerging stories of their crew might find a heroic sacrifice even more rewarding.

Bomber Crew runs quite well. In my ten or so hours of play I did not run into any bugs or graphical issues. Other players I’ve talked to have not encountered any issues either.

It’s absolutely refreshing to have a well made, fun, grog game come out that isn’t marred by the usual issues of the genre. Bomber Crew also wasn’t released in Early Access on the promise it would become feature complete. The game is lovingly made and the care the developers put into it can be felt in how complex the gameplay gets. So take to the skies and make legends. Just don’t forget to get your crew inside before a barrel roll.

Verdict
Expertly and lovingly crafted, Bomber Crew provides a satisfyingly complex suite of mechanics and situations to manage, and it is all the more enjoyable if you allow yourself to become immersed in the identities and fates of your crew. A near-perfect and shining example of its genre.
10
Cultured Vultures is a pop culture website established in 2013 covering all things gaming, movies, and more. We eat your words.
All The News On The Biggest Games