"Death is a surprise party." 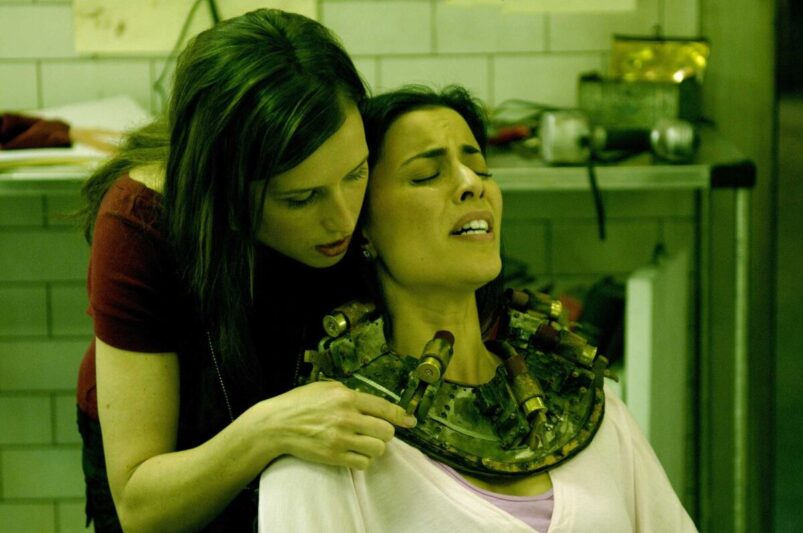 The first Saw movie debuted in 2004, earning $103 million on a budget of just $1.2 million and originating from the team of director James Wan and screenwriter Leigh Whannell, kicking off a lucrative franchise. Its first sequel, Saw II, replaced the unavailable Wan with Darren Lynn Bousman, who directed and co-wrote with Whannell, with Bousman going on to direct Saw III and Saw IV. The third movie in the series was released fifteen years ago, so it seemed a perfect time to look back at some of its themes as both a standalone and part of a series.

Saw III sits in a weird placement of the overall franchise, both as a culmination of the original trilogy and the bridge into the rest of the series. Bousman’s film has a fascinating connection to its two preceding films, as all three focus on the concept of familial relationships, both an overarching created family and individual blood families. These themes only truly come to realisation when viewing Saw III, which was originally planned to be the final film in memory of producer Gregg Hoffman.

The original Saw featured Dr Lawrence Gordon as the protagonist, attempting to escape the infamous bathroom trap to save his wife Alison and daughter Diana, while Saw II had Detective Eric Matthews motivated by the kidnapping of his teenage son Daniel. The difference between these two protagonists is that Gordon is the head of a nuclear family that has issues but still lives together, while Matthews has a fractured relationship with his estranged son and divorced wife. At the same time as we experience these two differing relationships, we follow the growing family that develops between our two main antagonists, John Kramer and his apprentice Amanda.

The first film has a single scene dedicated to Amanda and fleeting glimpses of Kramer, but these actually set the groundwork for the entire franchise. Amanda’s recollection of her escape from a bear trap becomes the trigger for her transition into Kramer’s follower, becoming integral in Kramer’s game during Saw II. By the time we enter Saw III, their relationship had become that of father figure and the adopted daughter given meaning in her life by him. They had created their own family, one that hit an impasse in Saw III at the same time as we are introduced to Jeff Denlon.

Our newest protagonist in the series, Jeff is the next evolution in the original trilogy’s focus on fathers and their familial relationships. Whereas the first film had Gordon with his loving pre-teen daughter Diana, and the second had Matthews with an estranged teenage son Daniel, Jeff is a father without a son. Specifically, Jeff is a grieving father consumed by anger and vengeance after his young son Dylan died in a drink-driving accident, unable to move on from his loss. Whereas Gordon and Matthews were either absently unappreciative or ill-tempered with their children, Jeff misses and mourns a son who was integral to his being. It’s this inability to move on from his anger that leads to Jeff becoming the latest choice for Jigsaw’s tests, with Jeff having to decide whether to save those involved in the lack of justice for Dylan’s death.

Speaking of death, Saw III features ten deaths in total and all but one (flashback to Adam in the first movie) are related to the two integral relationships at the core of the movie. There are the deaths of Troy and Detective Kerry, both of whom are set-up by Amanda in an inescapable manner that disrespects Kramer’s philosophy. There is Jeff’s son Dylan from before the movie, and the victims of Jeff’s tests, Danica the witness who ran away, Judge Holden who didn’t punish the driver, and the driver himself Timothy. And finally the third act climax, which features a dying Kramer, his apprentice Amanda, a gun-toting Jeff, and a kidnapped doctor called Lynn.

In this third act, the two family focuses come together, Kramer’s growing disappointment in his surrogate daughter Amanda and Jeff’s lust for vengeance clashing. The audience discovers that there were two tests in action, not just Jeff’s, but also Amanda’s second test. In John Kramer’s eyes, he couldn’t have an apprentice who intentionally set out to kill people to continue his legacy as Jigsaw. His intentions were to see if Amanda could curb her anger and jealousy to allow Lynn to go free after she completes surgery on John, a test Amanda fails as she shoots Lynn. This impetuous act not only cements the breaking of relationship between John and Amanda, but unknowingly (to Amanda at least) leads to their end, as Lynn is revealed to be the estranged wife of Jeff, who arrives just in time to see Lynn get shot.

As Amanda realises her failure, Jeff proves he also hasn’t learned from the lessons that Kramer has tried to teach him, as Jeff shoots and kills Amanda. John offers Jeff a choice, to forgive Kramer and call an ambulance to save Lynn, or to kill John. Unsurprisingly, Jeff decides to kill Kramer, and in the process dooms both his wife Lynn, who had an explosive device around her neck that is set off as soon as John dies, and his daughter Corbett, who was captured by John and Jeff now has to try and save. In the end, Amanda and Jeff were more similar than they realised, as their decisions create repercussions that destroy both their families, ending in the deaths of Lynn, Amanda and John himself. Just as the inaugural trilogy ends, so does the ongoing theme of fathers, families and children.

The rest of the series never really focuses as strongly on these themes, instead moving its focus onto Jigsaw’s legacy and a growing civil war between his apprentices Amanda, Detective Mark Hoffman (actually introduced in this movie), John’s ex-wife Jill Tuck (who briefly cameos in a hallucination by John) and Doctor Gordon. A lot of the groundwork for this war actually originates in this movie, which also helps the transition from Detective Matthews and Detective Kerry to FBI Agents Peter Strahm and Lindsey Perez as main challengers against Jigsaw (for two films at least), with SWAT Commander Martin Rigg bridging the transition. In fact, despite his death in the third act, John Kramer continued to appear in the sequels in varying amounts, as even death couldn’t stop Jigsaw and his revenge.

Saw III sometimes gets unfair flack, but it actually has greater depth than given credit, and is an integral part of the franchise. It ties up the main themes of the original trilogy, offers a great analysis of John and Amanda’s relationship in a manner that strengthens their scenes in other movies, and sets up the rest of the series convincingly. But more than that, it works as a fascinating standalone when seeing the parallel between both Jeff and Amanda and how their inability to move on from their negative emotions ends up jeopardising not just their own lives, but the lives of those who matter most to them. In the end, it wasn’t the traps or tests set by John that dooms them, but the traps they created for themselves.

READ NEXT: The Best Psychological Horror Games of All Time