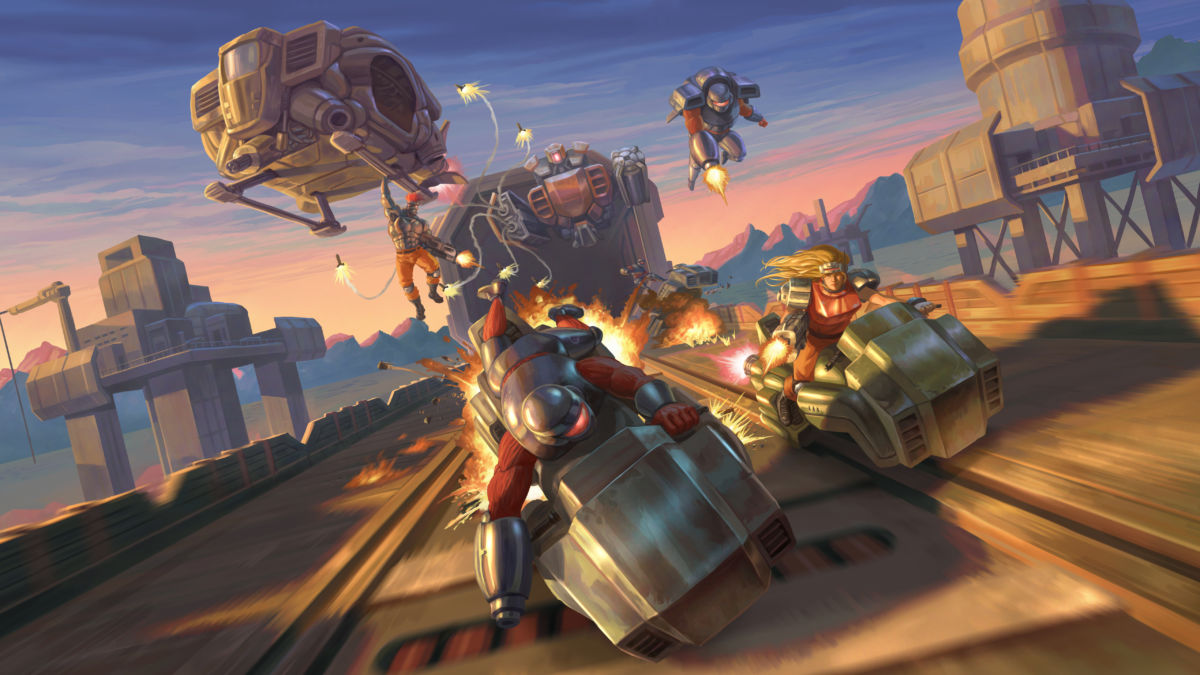 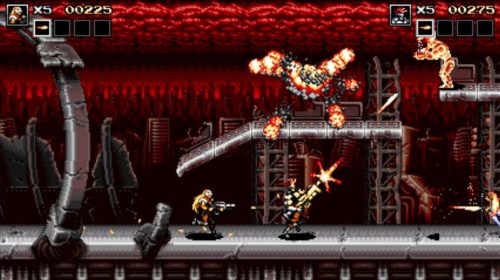 Some games are designed to be emotional journeys, tackling a variety of social issues as we see characters grow and evolve. These are all well and good, and we love them, but there are some games that just want to blow your nips off with a concentrated blast of retro fun, and we love those too. Blazing Chrome falls comfortably into the latter, and it’s great fun.

An old school shoot ’em up in every sense of the word, you control one of two Resistance members, with more to be unlocked later. It’s the post-apocalypse, robots have taken over and you’re on a suicide mission to take down the Toasters. They’re called Toasters, don’t worry about it; it’s about all the context you really need to take down wave upon wave of enemies. 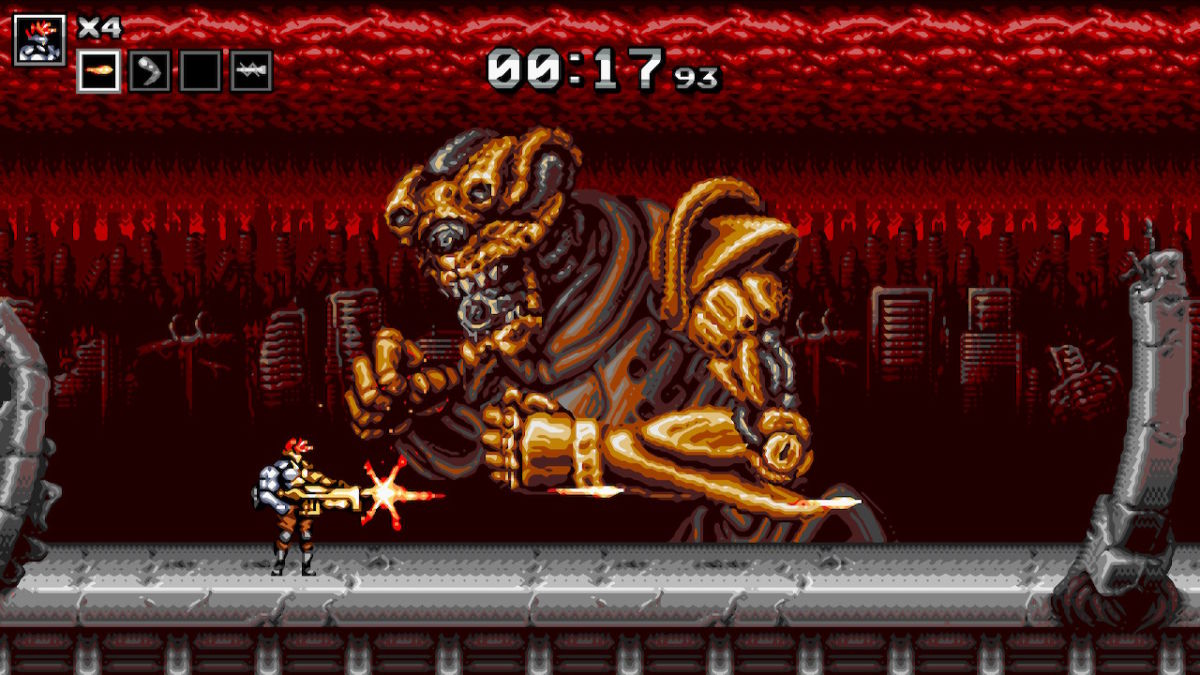 The controls are fairly simple and made for the Joy-Cons, with B to jump, Y to shoot and X and A to change weapons. Holding down R will plant your feet, allowing you to aim more accurately, though don’t expect full 360 degree aiming. This is an old school throwback, after all. Unfortunately, there’s no option for custom button mapping, so if you happen to be using a third-party GameCube controller that has bumpers (like me), the control scheme will take some getting used to.

The actual gameplay feels responsive for the most part, and once you get into the swing of things, you start feeling like a robot slaying badass, conquering everything in your path. There are one or two sections of wire platforming though where Blazing Chrome can be a bit frustrating, as the game registers inputs you might not have intended. The level 4 mid-boss in particular requires you to be deliberate with your approach. The difficulty in that fight comes from your mistakes more than anything else. 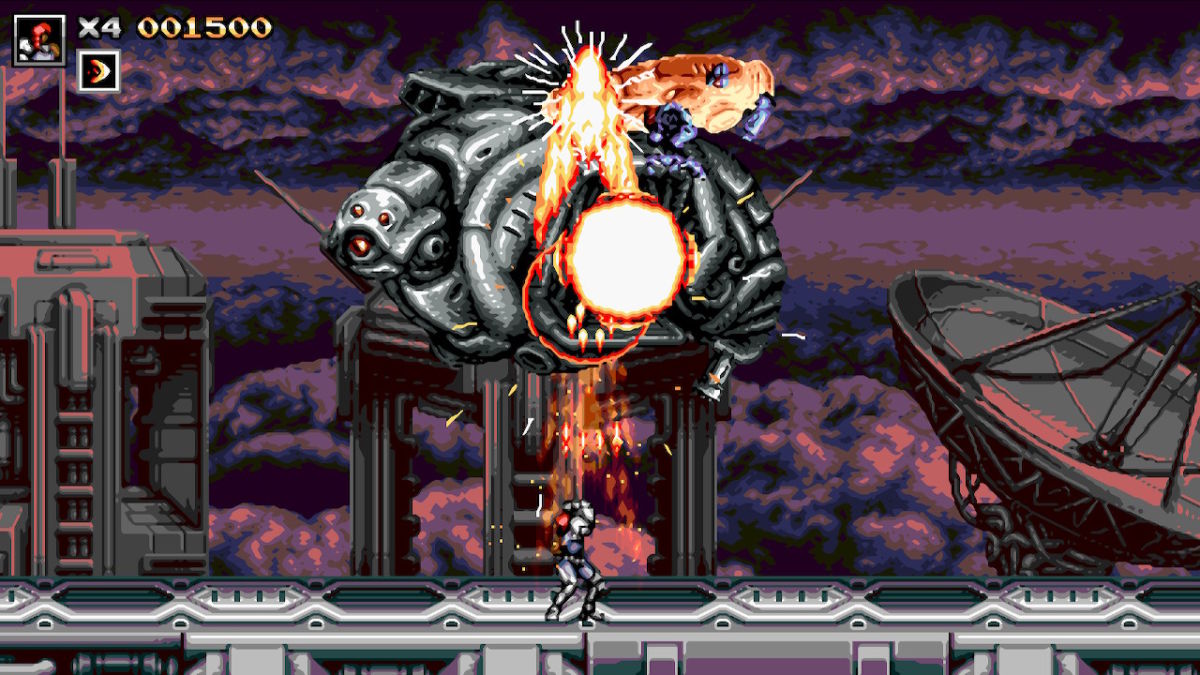 One disappointing aspect is the weapon selection. Aside from your basic machine gun, you can earn power-ups that give you a whip, a grenade launcher and a proton beam. While the grenade launcher is as useful as you’d expect for clearing hordes and damaging bosses (very), the whip and proton beam just don’t feel as satisfying to use. They’re effective at killing enemies, but guns and explosives just feel better, though I’m waiting for future speed runs to prove they’re actually the best weapons in the game.

Blazing Chrome comes into its own during boss fights, as they’re often huge machines that seem impossible to beat at first, until you learn the patterns and kick its ass back to Skynet. They’re not a reinvention of the wheel, though the final boss plays with perspective in a way I haven’t seen in a 2D platforming shoot ’em up, but they’re simple and effective. 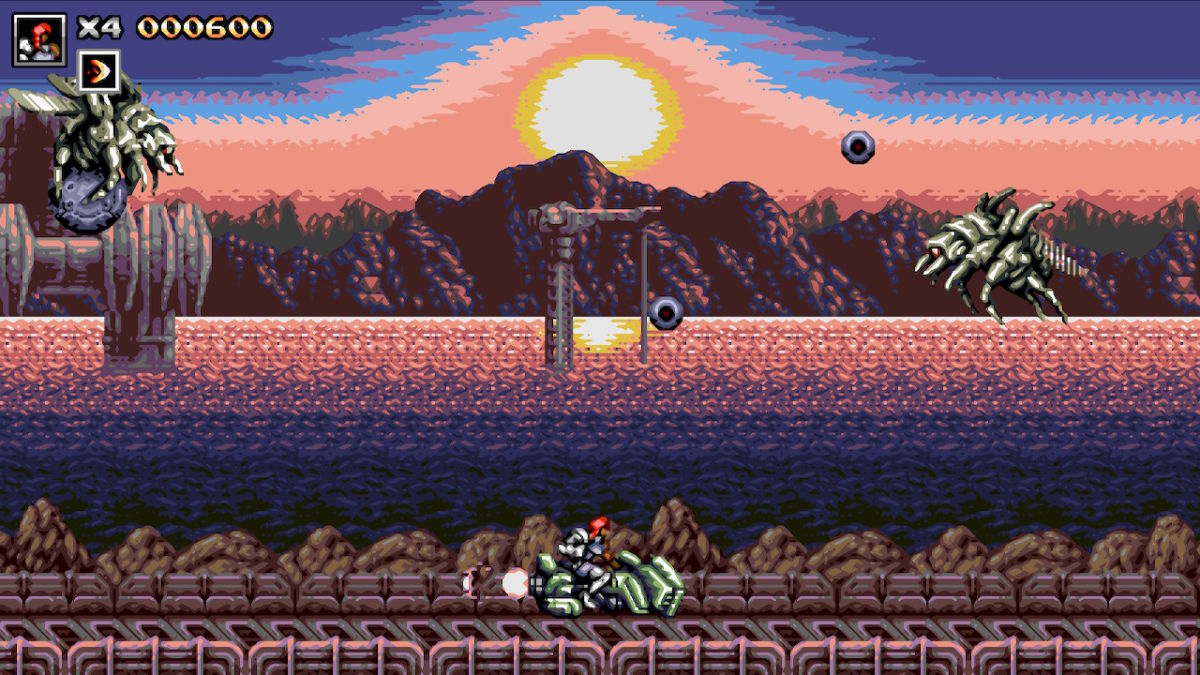 What’s also interesting about Blazing Chrome is how it occasionally switches up its formula. The start of levels 2 and 5 begin with speeder bike chase that has different controls and obstacles, while level 4 concludes with a 3D tunnel section where you pilot a jetpack as enemies attack you from the front. It helps keep the game fresh during its brief runtime.

Blazing Chrome is at its best as a handheld title. The natural feeling of the controls is great, but the Switch’s screen size allows you to truly see everything that’s happening in-game. If you’re looking to torture yourself with a hard game on the daily commute before you get tortured in work, Blazing Chrome is for you. 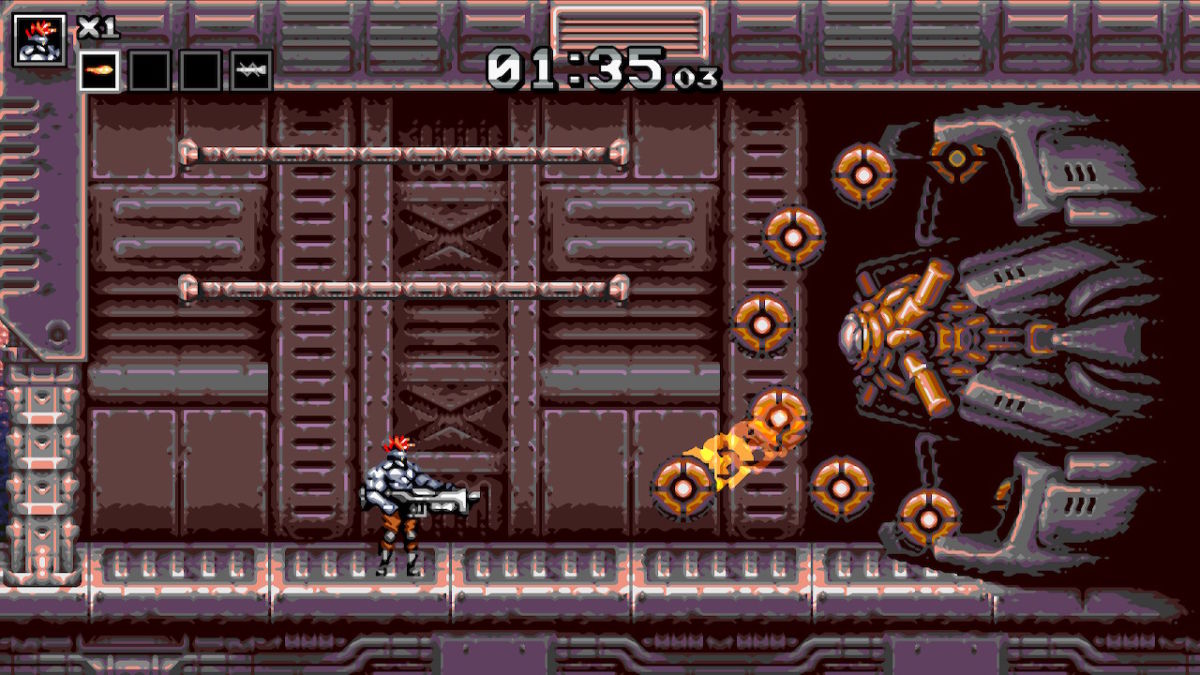 While Blazing Chrome is hard, as you would expect from a retro-inspired shoot ’em up, the game doesn’t verge on being cruel. There are game overs, but restarting will send you back to a checkpoint that’s generally not too far away. There is a consequence for death, but death is necessary for success, and Blazing Chrome doesn’t punish you for that.

Admittedly, some later game levels and checkpoint placement will test your patience, with the speeder bike opening to level 5 being a real pain in the ass at times, but perseverance is the key to success. With enough tries, you’ll be able to best Blazing Chrome, even if only on the easiest difficulty. 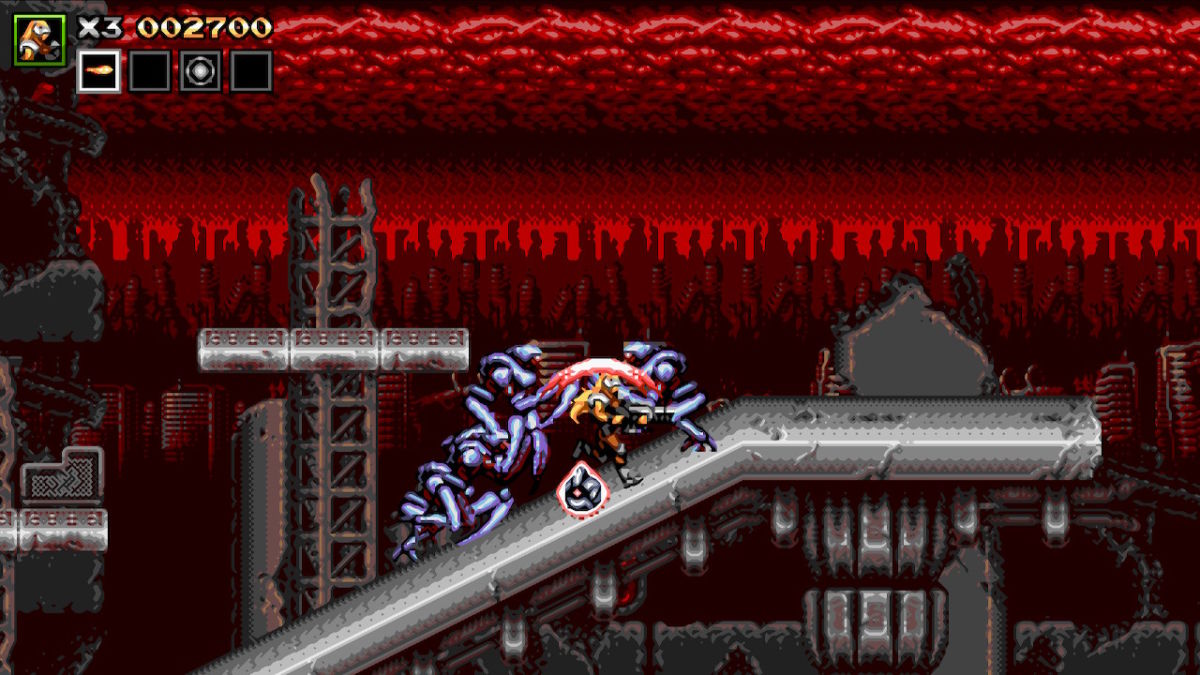 When you first launch the game, you only have access to Easy and Normal difficulties. Completing the game on any difficulty will net you two new characters who specialise in melee and have increased mobility, making for a whole new way to play, along with a Boss Rush and Mirror Mode, further adding to the replayability.

On top of that, finishing the game on normal unlocks Hardcore mode, which is just a coin operated arcade machine in the palm of your hands. You’re given 3 lives and 3 continues, and you must finish the entire game in one run, no saves. It’s only for the brave, and the only way it’d be more authentic is if the Nintendo Switch punched you and took your money every time you got a game over.

Blazing Chrome isn’t a long game, with a possible first completion clocking in at around 2 hours, but the overall experience demands replayability, either on a higher difficulty, or a different character type. Fans of retro arcade shoot ‘em ups should consider this one an essential purchase.

Verdict
Blazing Chrome isn’t some grand reinvention of the shoot ‘em up genre at large, but for the most part, it does a masterful job of utilising the genre’s best conventions. Definitely worth checking out.
8