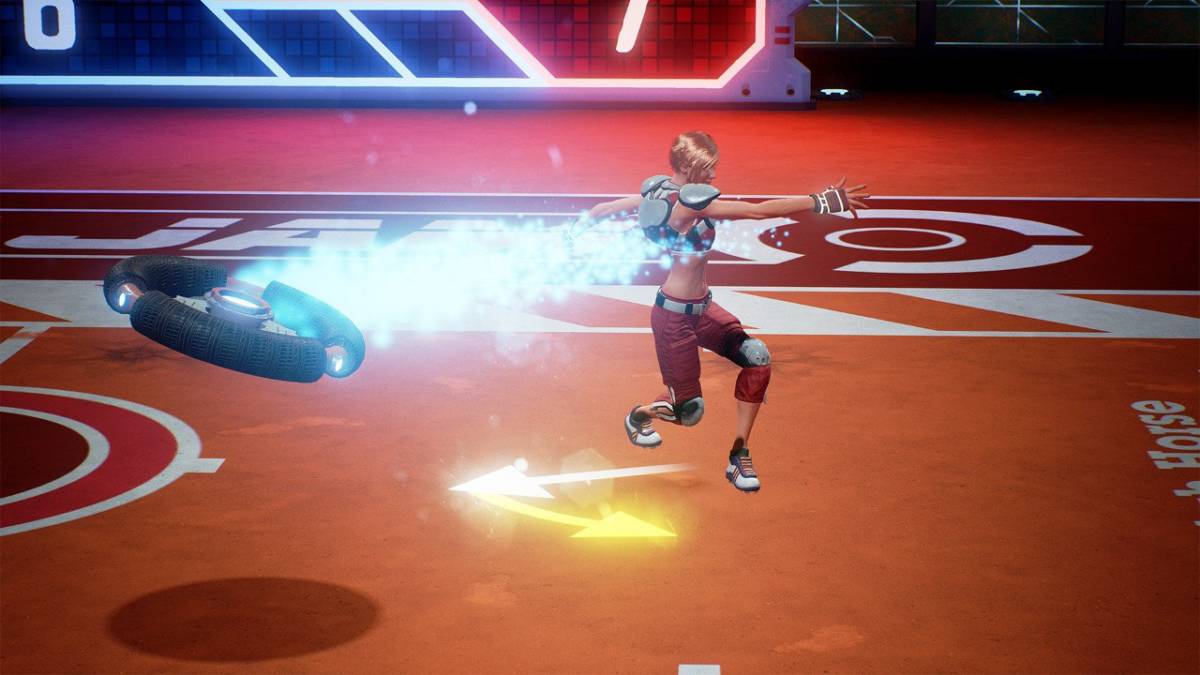 As much as I love them, I think sports games can be a little dry at times. Their occasional over-reliance on realism and a po-faced lack of self awareness can, at times, make for a distinctly unabsorbing experience. As outlandish as it may seem, I feel that a combination of explosions, lasers, and sweet flips would definitely liven up your average round of FIFA. Thank goodness then for teams like High Horse Entertainment for bringing us Disc Jam, an over-the-top arcade sports game filled to the brim with, you guessed it; explosions, lasers, and sweet flips. It’s even on Nintendo Switch, which means you can carry it around with you.

Disc Jam is perhaps best summarised as competitive frisbee-tennis. Players can choose to face off against an opponent in a 1v1 Singles duel, or team up with a fellow disc-jammer in a 2v2 Doubles match, and proceed to launch a giant frisbee at each other until one player misses and concedes the goal/score/unit of sport. Goals are worth differing amounts of points, and are worth more the longer the rally goes on. A handy scoreboard in the middle of the net keeps track of the points on offer, so the player is always aware of exactly what stands to be won. The first player or team to amass 50 points wins the set, and the first to win two sets takes the game. It’s a refreshingly simple setup which makes for a highly accessible and addictive experience. 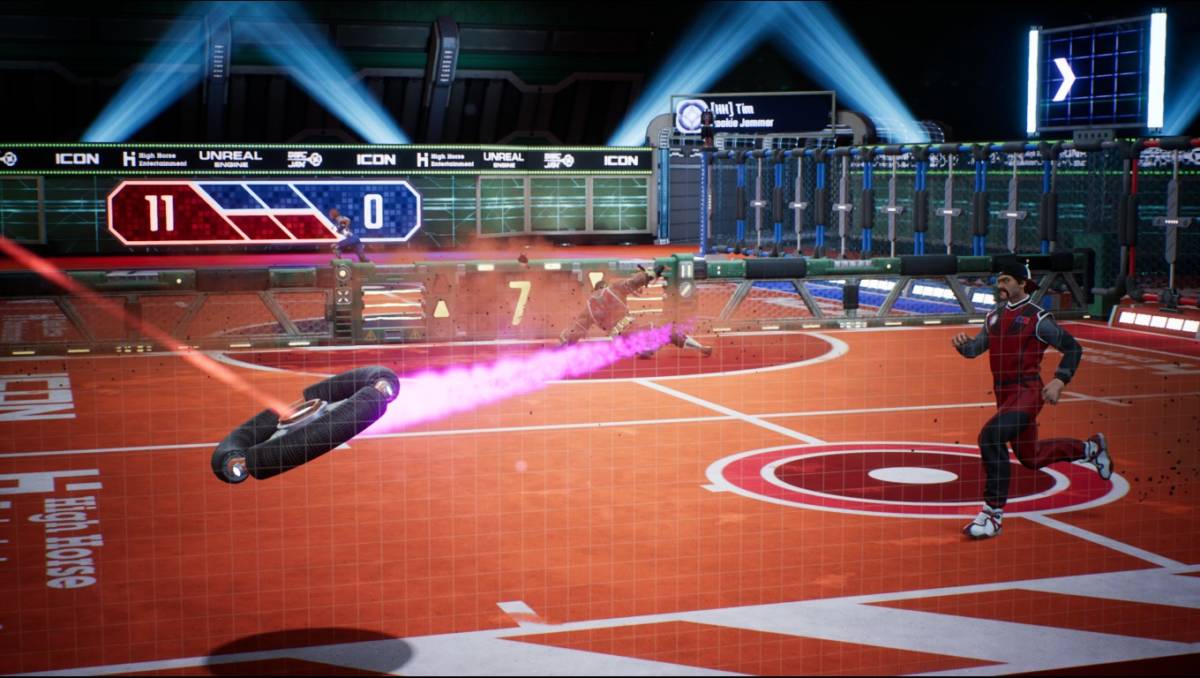 The range of points that can be on offer at any stage during a match allows for an impressive amount of variation in each go around. With the matches being relatively snappy affairs, especially in comparison to other sports games on the market, there was potential for Disc Jam to quickly become repetitive. Thankfully this isn’t the case, as the ever-changing amount of points on offer keeps the stakes high and the games unpredictable. One moment of brilliance can overturn a previously drab display, and astute defending in the face of an attacking onslaught can reap serious reward if an opponent slips up. It all goes together to create something which manages to hit that elusive sports game sweet-spot between being accessible, engaging, challenging, and balanced.

This idea of balance also extends to the characters and cosmetics. From the outset, the player can choose from four playable characters, with two more available to purchase using in-game currency. On top of the universal moves such as lobs, power throws, and wild spins, each character is unique in their strengths and attributes, allowing players to choose which playstyle they wish to adopt. Again, balance is important, and while the differences between characters are definitely recognisable, it never feels like one character completely overpowers another. For example, Haruka’s agility gives her the potential to absolutely run rings around Stanton, but his brute strength can seriously punish any positional errors she might make. In other words, a competent player can use any character to play against any character. The accessibility in this regard is really to be commended, as it is present in few other competitive games.

That’s about it for the mechanical side of things, now for the game modes. The game offers ability to play Singles or Doubles matches both online and offline. The online play is a dream: games load and connect fast and run with little to no lag in my experience, and my internet connection is modest at best. Whether playing Singles or Doubles matches, the player goes through an initial ten placement matches which give an indication of the player’s skill level. After the placement matches are complete, the player is streamed into the appropriate League, and it’s generally easy to find players in the same League with a similar skill level. It’s a very well implemented system and the game’s criteria for what it considers to be a fair match seem quite strict, so there’s very little chance of you being absolutely stomped by a superior opponent. 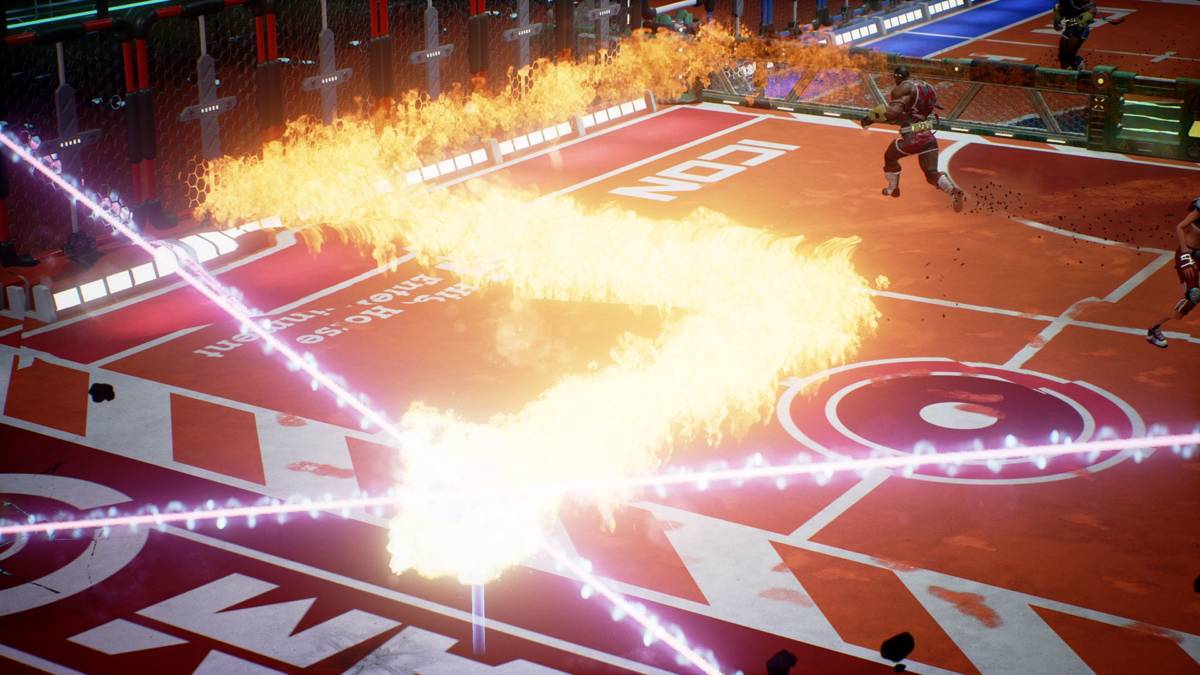 One of the most impressive aspects of Disc Jam, at least in this humble writer’s opinion, is the way the game approaches offline play. Rather than simply expecting players to be content battling bots in the offline matches, the game instead introduces what it calls the Ghost Arcade. This mode allows players to face off against the ‘ghosts’ of other real players in the same vein as Mario Kart, giving a more fulfilling and challenging experience than would have been possible with standard, computer-controlled, opponents. The Ghost Arcade also affords offline players a much fuller experience, more in keeping with the high-octane spirit of the online matches. Essentially, the game is just as good when you’re cut off from the internet on a flight as when you’re nestled at home in your favourite armchair. Bravo, indeed.

Just one more point on the online and offline play, and it relates to cosmetics. Disc Jam contains a whole host of in-game unlockables ranging from new skins, to new discs, and even entirely new characters. The majority of these items are unlocked using the in-game currency you get for playing online matches, and offer an additional element of customisation to the game. That’s for online, but if you switch to offline play you are allowed to mess around with the various locked items to your heart’s content. See, your offline stats don’t carry across to your online profile, which means that Disc Jam has no need to lock the items in offline mode, so you can feel free to try the locked characters to see if they’re worth the purchase. It’s a very player-centric move on the developer’s part and one which is very welcome, as I feel it does a lot to round out the online experience while simultaneously adding value to the offline play. 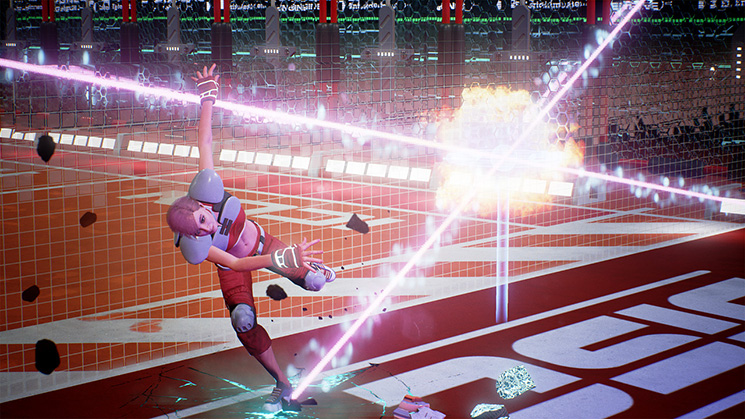 Did I mention that the game looks absolutely gorgeous? Well, it really does. The characters are all unique in their design, and manage to illustrate their playstyle in a kind of visual shorthand. The animation is sublime, with magnificent attention to detail going into things like the movement of Haruka’s cape as she executes a crazy diving throw. The colours are vibrant without being overpowering, meaning that nothing ever gets lost in the onscreen chaos.

If there’s one problem with all of this, and unfortunately there is, it’s that playing Disc Jam in handheld mode seems to absolutely massacre the Switch’s battery. It really is quite distressing how quickly the battery will fall away after a couple of games, it’s almost to Breath of the Wild levels and that’s saying something. It seems to be a product of the game endeavouring to run at full capacity even when in handheld mode, which is certainly admirable in its optimism, but one cannot help but think that this issue could be significantly improved by the introduction of resolution and performance scaling as seen in other games with Switch versions, such as Rocket League.

Blatant murder of system batteries aside, Disc Jam is a marvelous addition to the Switch’s library. Its high-octane action and almost child-like sense of fun are incredibly charming and highly addictive. The online play is wonderfully challenging and the offline play is deeper and more complex than we would perhaps ever have expected. The characters are diverse enough to fit any personal playstyle, and the various cosmetic items add an extra dimension of personalisation to proceedings. In short, it’s exploding frisbee-tennis, what’s not to love?

Do you agree with our views? Sound off in the comments below, and check out our list of the best exclusive Nintendo Switch titles.

Verdict
A shamelessly fun and relentlessly addictive arcade sports outing, Disc Jam takes a simple concept and polishes it to near perfection. If you think your thumbs are ready, come on and slam! Microtransactions: Yes
9
Cultured Vultures is a pop culture website established in 2013 covering all things gaming, movies, and more. We eat your words.
All The News On The Biggest Games