Bendy and the Ink Machine (Xbox One) REVIEW – Inkredibly Disappointing

Bendy and the Ink Machine’s concept is easy to get into, so it’s a shame that its core design breaks immersion at every turn. 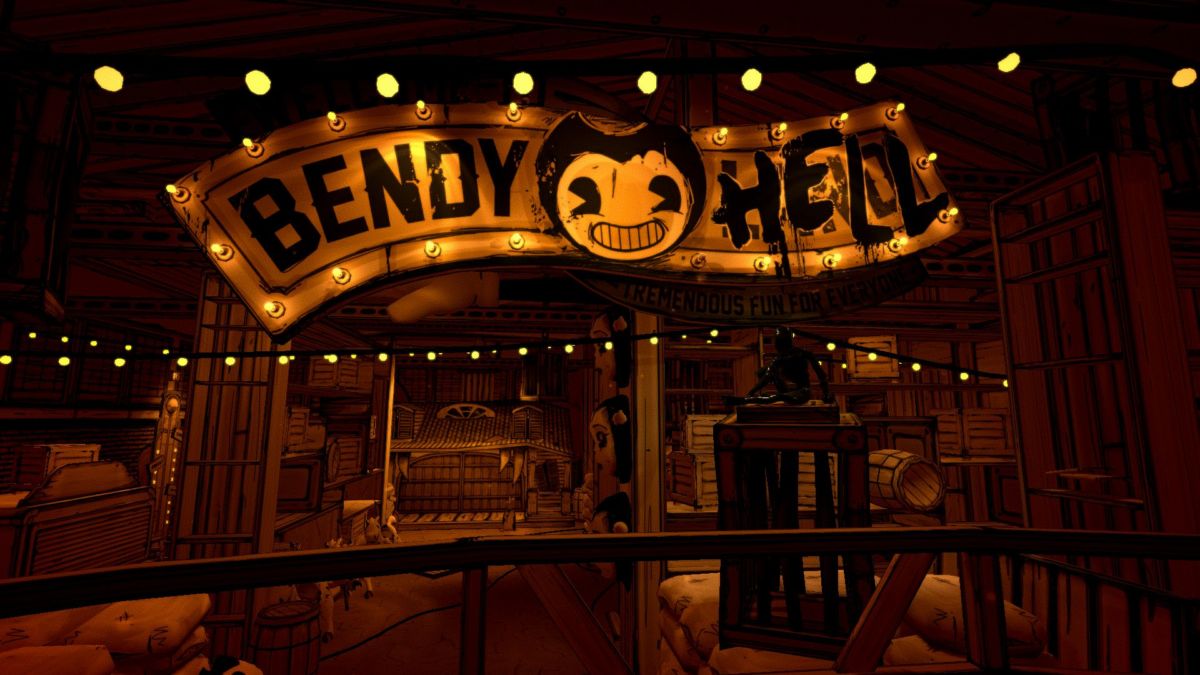 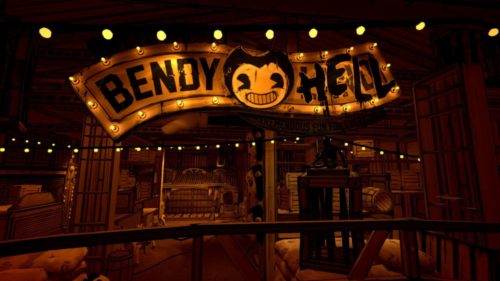 Indie horror games have turned out to be one of the most successful genres of the last eight or so years. Whether they gain notoriety through popular YouTubers like Markiplier, who get millions of views on videos where they overreact to a flacid jump scare, or they become instant classics, being shared around among horror enthusiasts and gaining popularity through word of mouth, the modern “horror walking sim” seems as though it’s here to stay. Bendy and the Ink Machine, however, can go right back where it came from.

Bendy and the Ink Machine’s premise doesn’t have a lot of complexity, but it doesn’t really need it to catch your passing interest. Creepy old cartoons coming to life in an old animation studio is all you get (to start with). The rubber hose animation aesthetic is portrayed very well however, with a nicely realized, albeit repetitive, 3D-2D art style and a foreboding backstory that helps to expand the plot beyond its simple inception. It’s just a shame that you have to actually play the game to experience any of it. 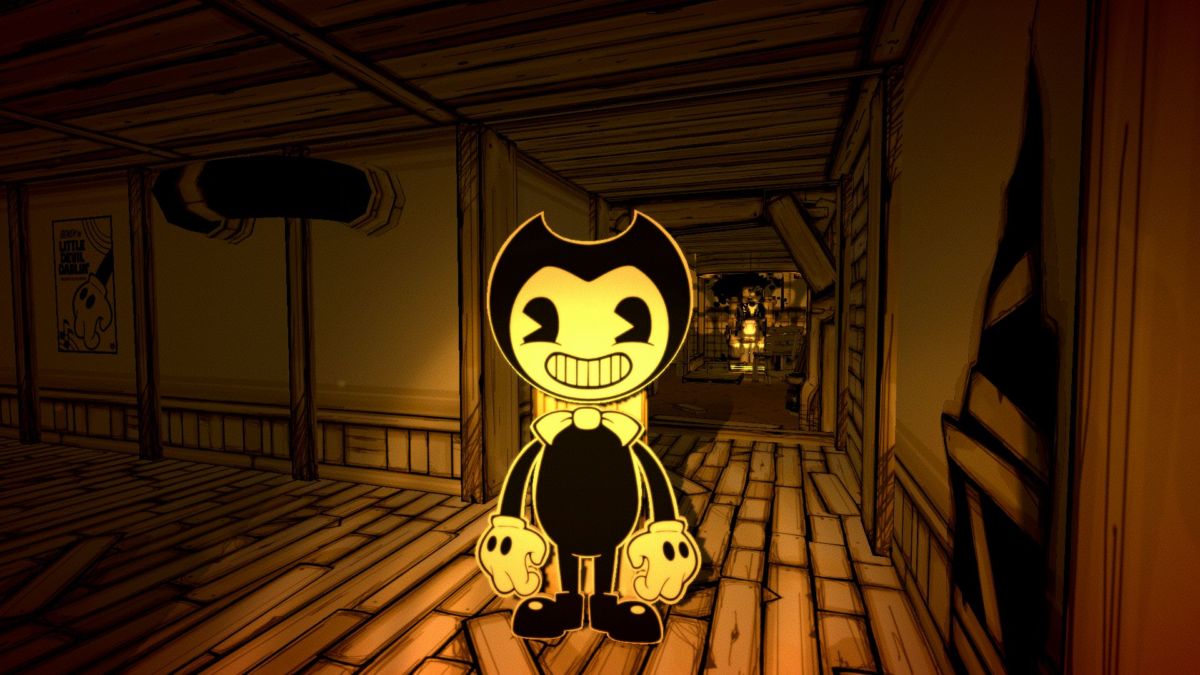 It’s very clear from the start that this is the developer’s first 3D game. For the initial chapters, level designs are boring, empty, and lack interesting elements beyond their art style. Puzzles consist mostly of backtracking through samey looking copy-pasted areas hunting for small keys and waiting for the next stilted jumpscare. It’s lazy, uninteresting, and hard to overlook despite the strong art direction.

Thankfully, since this game was developed over the course of 1 and ½ years, chapter by chapter, the devs were able to respond piece by piece to many complaints. From Chapters 2 to 5, we get more and more interesting combat options, impressive lighting effects, scripted setpieces, new locales, and more context to the creepy happenings at Joey Drew Studios. On top of that, they also went back to initial chapters, adding more fluidity in the controls, artstyle consistency, and eventual connections to future chapters. But despite all the improvements, the game always seems to fall back on the same generic padding provided by the first chapter: drudging through repetitive hallways for more randomly placed keys. Due to this, Bendy and the Ink Machine has trouble finding a consistent pace. 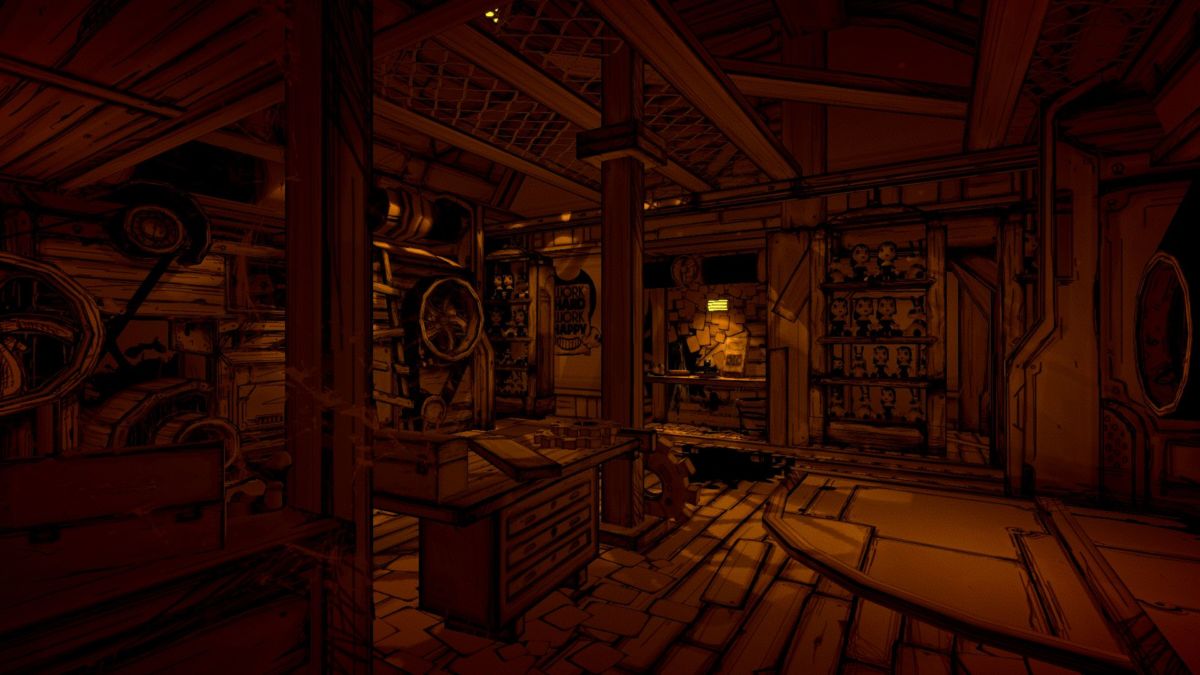 You could be experiencing the story, riding the whirlwind of horror, intrigue, and exploration provided by the stellar writing, then come to a screeching halt as you fumble around with poorly veiled fetch quests, even more key hunting, and hiding in closets from the randomly spawning one-hit boss enemy (bits which I lovingly refer to as “jank Outlast”). In these moments, the game slows to a crawl and leaves the plot in limbo, eliminating any sense of tension. Chapter 4 and most of Chapter 5 buck this trend of padding for the most part, but by then it seems too little too late.

Aside from the poor pacing, the game also has a few console-specific problems on Xbox One, primarily shadows and the special bonus gallery chapter. First off, you character has no shadow, which is an odd design choice. It leaves moments that would be filled with tension ridiculous as you see the shadow of your floating weapon connected to nothing, leading to a laugh that has no place in a game intended to frighten. On top of that, the shadow resolutions are low. Real low. The jagged edges betray the otherwise impeccable lighting, and it may just be a sacrifice the developers had to make to get the clean art style running at a consistent framerate. The Archives chapter, however, does not load on Microsoft’s console at all. The loading screen lingers and never fades, making one of Bendy and the Ink Machine’s few bonus features null and void. 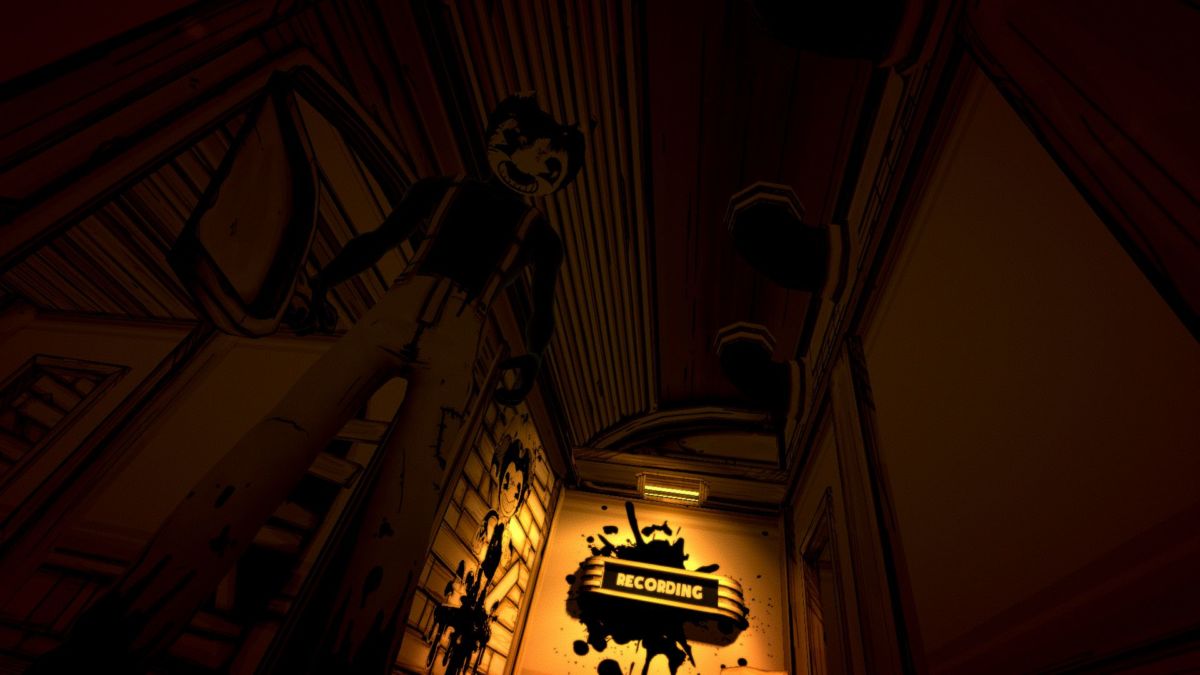 It’s hard to recommend Bendy and the Ink Machine in its current state. Despite having a captivating well-paced 4th Chapter and a satisfyingly creepy ending, it doesn’t come close to outweighing the poor design shown in the earlier chapters. By the time the game feels like it’s finally coming together, it’s over. The game does give you replay incentive to go back and explore earlier areas, but once you’ve been through the game once, it’s hard to be enticed to go back.

It’s a real shame that a game with such a unique style, interesting development period, and good story gets held back by its own dated and jank gameplay mechanics. The game is at its best when you’re progressing through engrossing scripted areas and well-crafted set pieces, but sadly those moments are few and far between. If they could have found a way to bypass the recurring key hunting and fetch questing, this would have been a surefire indie horror darling. Instead it falls flatter than a Bendy cutout after a half-assed jump scare.

Verdict
Bendy and the Ink Machine’s concept is easy to get into, so it’s a shame that its core design breaks immersion at every turn. Add to that the handful of issues on Xbox One and you’d have to be looney to tune into a game this h’yucked up.
5.5
Buy on Amazon