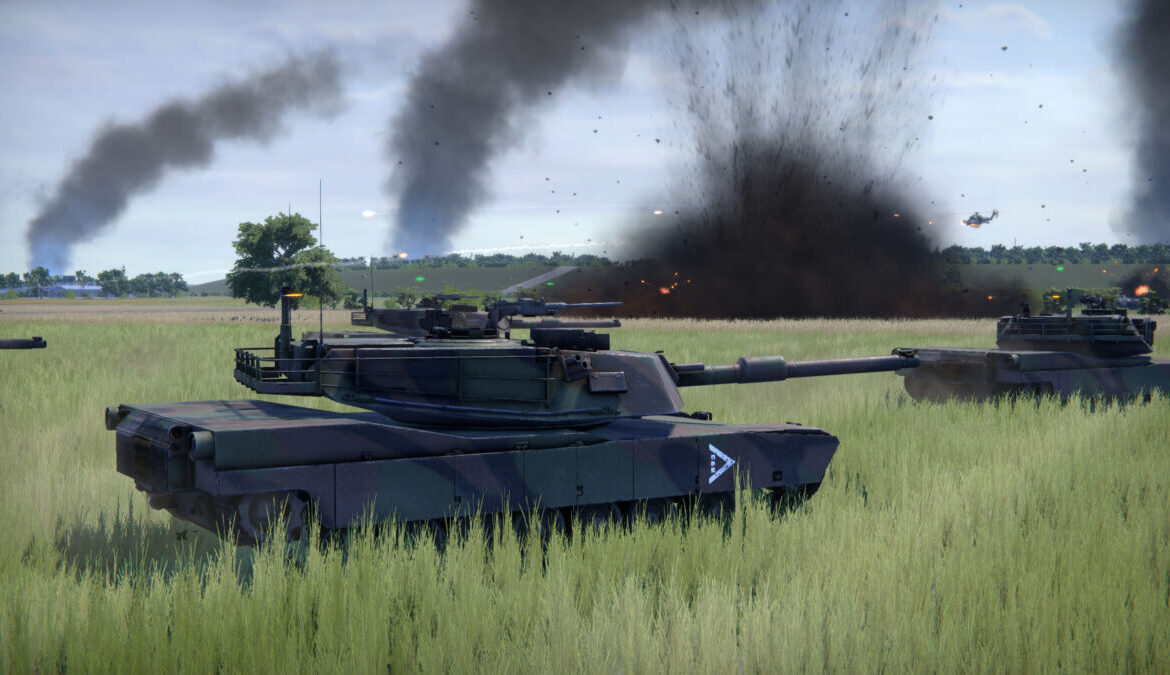 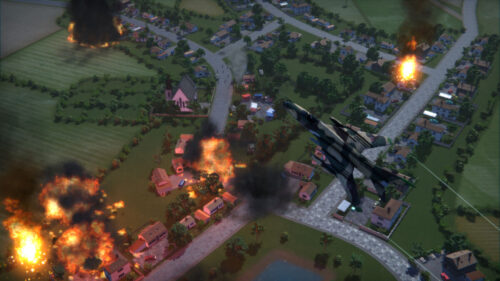 With the success of Eugen Systems’ Wargame series and, unfortunately, due to recent political events, there’s been a serious spike in interest for Cold War content in gaming. The reborn MicroProse Software is also on the hunt for original video games to build out and bulk up its library of products. Can Regiments recapture the success of MicroProse’s captivating debut game HighFleet and model the Cold War in a fresh and compelling way?

Bird’s Eye Games’ Regiments is a single-player real-time strategy game where you experience a hypothetical Cold-War-gone-hot scenario centered around West and East Germany. The game offers custom stand-alone skirmish missions and a series of mini-campaigns in the Operations mode. In each mission and phase of the campaign, you’ll be tasked with commanding a titular regiment, based on real formations and orders of battle to immerse you into the game’s setting and give distinct tactical challenges in each scenario and mission.

From the presentation side of things, Regiments is quite the mixed bag. Graphics are perfectly serviceable with decent-looking units and varied maps with clearly distinguished zones of terrain. However, you’ll spend most of your time zoomed out for ease of command and control and, as a result, won’t have too much reason or opportunity to zoom into the action and enjoy the unit models in detail.

The audio design is where Regiments is at its most inconsistent. The weapon sound effects are quite great, with deep punches for tanks lighting up their targets and artillery explosions sounding crisp and impactful.

The music isn’t anything exceptional and, at times, has off-balance mixing, especially in the main menu where the soundtrack is puzzlingly quiet even at default settings. The most egregious immersion-breaking element of the sound design, however, is the complete lack of national voice acting.

No matter which nation you play, all units speak in perfect American English, even if you’re playing as the USSR, the Belgians, Germans, and even the British. It may not be the most critical part of the experience, but modeling unit identity and language goes a long way in pulling the players into the game’s world.

Presentation woes aside, Regiments shines most with its core gameplay, unique mechanics, and features to bring a distinct Cold War strategy experience. The tactical gameplay is dynamic and effectively illustrates the period’s emphasis on combined arms mobile warfare where the coordination of different unit types is critical to success. The game also gets extra points for taking on the Cold War setting, as it’s still relatively underrepresented in strategy gaming.

Regiments’ tactical gameplay isn’t quite as micro-intensive as the Wargame series or WARNO making it more accessible to beginners, since you’ll be commanding platoons of units that act in unison rather than single vehicles or squads of infantry. However, it has a far larger scale and a greater sense of historical authenticity compared to Massive Entertainment’s World in Conflict, so it reaches a happy balance between these two games to find its own niche.

Speaking of scale, the maps in Regiments are impressively massive, which makes frontlines porous with enemies attacking and maneuvering from unexpected directions and angles. The relatively limited sight range of recon also means you have to use them more actively and keep your eyes open to catch the enemy before their offensive goes into full swing.

The large size of the maps also means that, as you advance, your supply lines will stretch and unit conservation becomes more important, as it’ll take longer for reinforcements and supplies to arrive. This means forward planning and using your units efficiently is all the more vital to success.

However, it’s the unique Task Force system and Operations mode that show Regiments’ innovative potential. The former allows players to call in dedicated unit packages, up to three, either in-battle or in-between missions to augment their current force composition. This gives players a chance to customize their force and respond to threats on the fly and is an inspired and thematic choice to model the dynamism and flexibility of Cold War warfare. In addition, every regiment has its own force composition, as well as a selection of task forces, so you’ll have to adapt to the troops of every formation and come up with a distinct tactical approach.

Operations is the game’s cornerstone mode and lets players play multiple persistent missions tied together by a simple narrative, all the while customizing their regiment and resources in between missions. Each operation will invite you to play as different sides in a hypothetical escalating conflict, with some mini-campaigns lasting several stages broken into multiple phases, and shorter campaigns where you need to blitz the objectives and win quickly.

The brisk 20-minute length of each phase of the campaign and the persistent elements, such as unit experience and task force upgrades, provides plenty of potential for meaningful strategic and tactical decision-making. Also, given the limited resources at your disposal and the porousness of frontlines, missions can be quite challenging and lead to tense moments and exciting counter-attacks.

Alas, Regiments has a number of serious problems that bring the game down several notches. The first and largest of these issues is replayability.

Though the game offers a decent amount of content, both the Task Force system and Operations mode strongly signal that there should be multiple ways you can approach a scenario. Unfortunately, there’s little reason to replay any Operation more than once even on higher difficulties, as there isn’t any mini-campaign that’s outstanding enough to experience over and over again. The customization options available for each operation also aren’t impactful enough to make each playthrough distinct.

This is where the complete lack of any kind of online integration or multiplayer really hurts the game. There’s no leaderboard or achievements system to help you compete and compare with other players in the community to improve your performance and engage with other players.

Many strategy games of this type, especially historical ones like Panzer Corps 2, include either a scenario editor or a random mission generator, which gives more ways for players to create their own scenarios or give extra unpredictability. Regiments lacks this tried-and-true component to give itself a longer shelf life.

The skirmish mode doesn’t fare much better in increasing replayability. Sure, it lets you play as some regiments that aren’t present in the Operations mode, but after a couple of playthroughs, these matches will get pretty old pretty quickly.

Another serious problem that creeps into and causes frustration in the Operations mode is how the game presents information. The UI is serviceable, but the game is quite inconsistent and disorganized in presenting critical information to the player.

Regiments condenses the most important info into its built-in wiki, the Regipedia, which unfortunately is an uninspired wall of text, making it difficult to sort through and find what you need. The game has a drought of tooltips to help players ease into all the information and mechanics.

The most puzzling part of this information presentation is that some data appears in one place, but doesn’t appear in another, making it difficult and frustrating to calculate and plan, especially in the Operations mode. For example, every platoon of units you bring in has a cost associated with it and you can see this cost only in two places: during a mission in your entire force pool and when you’re in the Task Force selection screen in-between missions.

However, for some reason, you can’t see the cost of each platoon already in your force until you start the match. This makes it incredibly annoying to figure out initial force compositions and upgrades to execute the desired plan. This may be a small technical issue, but it has a negative effect on the gameplay that’s hard to ignore.

Finally, Regiments doesn’t help you at all in preparing for upcoming missions. There’s no way to tell what map you’ll play on, as there’s no map outline, preview, or even a short description, though this is more of an issue for the skirmish mode. Also, the game doesn’t tell you what changing the difficulty does in terms of AI behavior, numbers, resistance, and other modifiers, so you can prepare accordingly.

The final issue, though nowhere near as problematic as the previous two, is the overall simplicity of the terrain. While it includes the usual types such as flat ground, hills, woods, and towns, some missions have objectives and descriptors that denote more challenging terrain, such as rivers, swamps, and mud. Unfortunately, most of the time it seems the game ignores these opportunities to add further variety to the terrain to make the tactical gameplay even deeper.

Performance-wise, the game ran smoothly, even on larger maps with many units on the field, though there was some camera roughness in the tutorial only, so if you’re able to meet recommended specs you shouldn’t encounter many problems running it. The options menu is fine, though it lacks font size and UI scale options for greater customization. Regiments was also quite stable in that I didn’t encounter any noticeable bugs or crashes.

It really does seem that after the success of HighFleet that MicroProse is struggling to recapture that same level of quality. It’s extra disappointing because the games that MicroProse are publishing have some truly unique and fresh ideas to offer, such as in Carrier Command 2 and also in Regiments.

Regiments also joins this class of strategy games, like Line War, that hit something really interesting and innovative but don’t quite follow through or live up to the ambition. They have great skeletons of mechanics, but they need more meat on the bone, be it replayability, balancing, or modes to lengthen the game’s shelf life. Regiments is a neat, novel experience, but it’s likely to last you just a single playthrough, so we can only recommend it when it goes on sale. 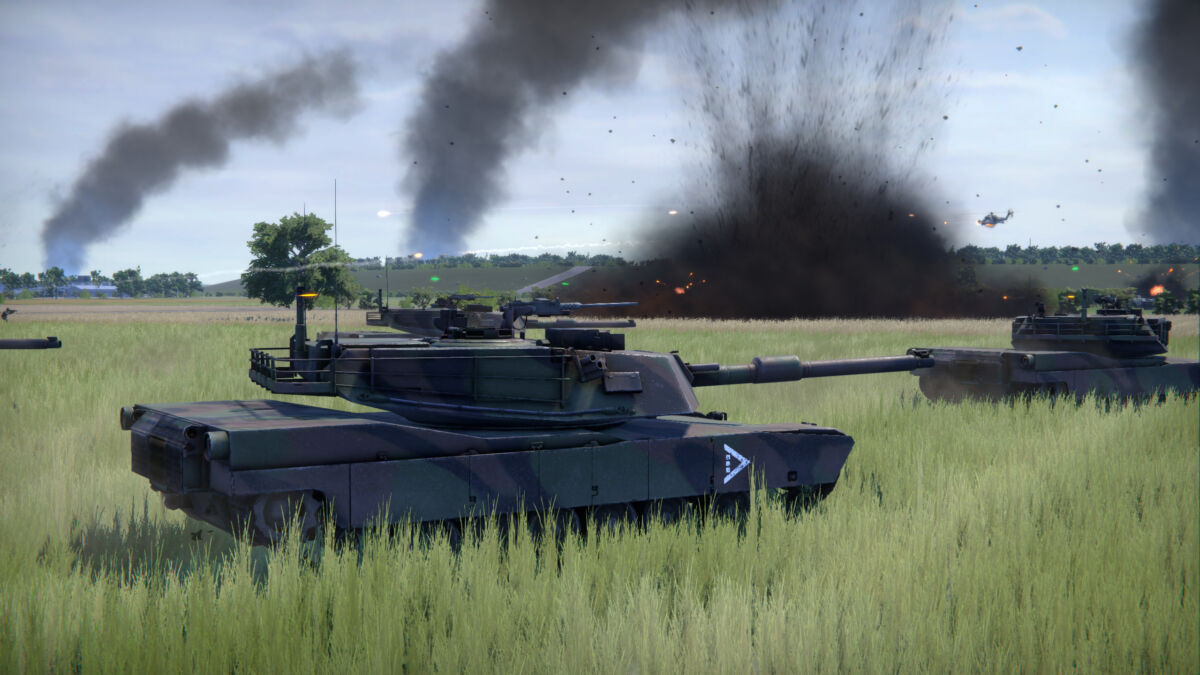 Verdict
Regiments may give you the opportunity to try yourself out as a combined arms commander, but it doesn’t go the extra mile to flesh out the experience to the fullest.
6.5
Cultured Vultures is a pop culture website established in 2013 covering all things gaming, movies, and more. We eat your words.
All The News On The Biggest Games