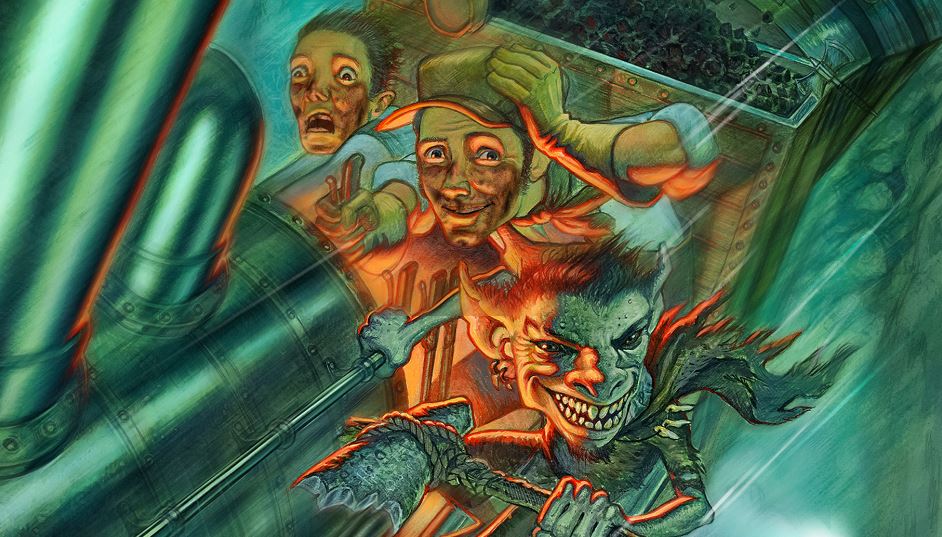 Well, this is almost it! ‘Raising Steam

’ is the penultimate novel in the Discworld series, and the last Ankh-Morpork based story. As such, although it is primarily a Moist von Lipwig adventure, I was pleased to be reminded that most of the Ankh-Morpork characters we know and love appear at some point here. Thanks to that, it feels like a fairly decent goodbye to them, all told. Even the wizards make their first real appearance since ‘Unseen Academicals’, as they go to test out this new-fangled ‘train’ that has the city buzzing.

Trains are what ‘Raising Steam’ is all about, after all. A young engineer named Dick Simnel finds his way to the city and to Harry King, who you may remember is the owner of Ankh-Morpork’s booming sewage business. Simnel brings with him his invention, a steam train, and Harry King sees the dollar signs in his eyes before Simnel has even finished talking. Vetinari brings in Moist von Lipwig to watch over the development of the new railway and soon enough, the engine Iron Girder has to step up and deliver the displaced dwarf king Rhys Rhysson back to his palace in Uberwald. It is more of an adventure story than any Moist von Lipwig has fronted so far.

That being said, ‘Raising Steam’ is not without its problems. It is very slow to get moving, plotwise – it isn’t until around halfway through the story that the real point of it all is introduced, and we move on-board the train to get going to Uberwald. There is no defence for the sluggishness of the plot, of course, and I do wonder if the character moments that I, as a huge fan, did enjoy, are actually responsible for slowing the story down at the start. Another reader, not as forgiving as I of Sir Terry’s cast of hundreds, would probably make that point and they wouldn’t be wrong. The only thing I can say is that with hindsight, knowing this is the last time we will visit these characters, I can forgive the pacing. If you really love Moist or Vetinari or the Watch, then you will subjectively value this book for what it is, and that wouldn’t be wrong either. At this stage, I think we can cut Sir Terry and his memory a little bit of slack.

What ‘Raising Steam’ does have in abundance is the aforementioned character moments, as well as lots of other Discworld references and throwbacks that will delight any fan reading it. Lu-Tze, the History Monk who has made several appearances throughout the series, pops up here for a page or two, just enough to let loyal readers know that this whole steam engine affair is going to be a pretty big deal. At the end of the book, when Moist actually converses with the very much alive Iron Girder, it is a direct throwback to ‘Small Gods’ and the idea that belief in a thing is all it needs to be alive and real. In fact, there are so many characters and throwbacks that at times it even made me stop and have to think, and I’ve read all of the books relatively recently. Pratchett used to baffle me somewhat with complicated plots, as you might remember (looking at you, ‘Mort’!) but it is fair to say that the later half of the series, whilst making the plots easier to follow, gives the reader less help with the references. It is a balancing act and probably why I do, on the whole, prefer the books from around ‘Maskerade’ onwards.

A last word then on Moist von Lipwig, the undeniably most popular character from the later books. I mentioned in my ‘Making Money’ reread that he is a changed man in many ways, but I was glad that he still retained those roguish inclinations that made him so entertaining in ‘Going Postal’. He is still using those inclinations here to his advantage, securing the land needed for the railway to expand. He has, however, also been spending a great deal of time in Vetinari’s melting pot, and it is starting to show. He is as outraged at the mistreatment of others as Vimes has ever been, leading attacks on bad guys with as much fervour as the commander ever had. He saves two children from being crushed to death by the train with no second thoughts like he may once have had. He bonds with goblins and gnomes and he’s there, ready for a fight when the dwarf king reveals that he may be more of the female persuasion than originally thought. Moist von Lipwig has truly become the man of the people that he once pretended to be and I, for one, think that it is a marvellous end to his story arc.