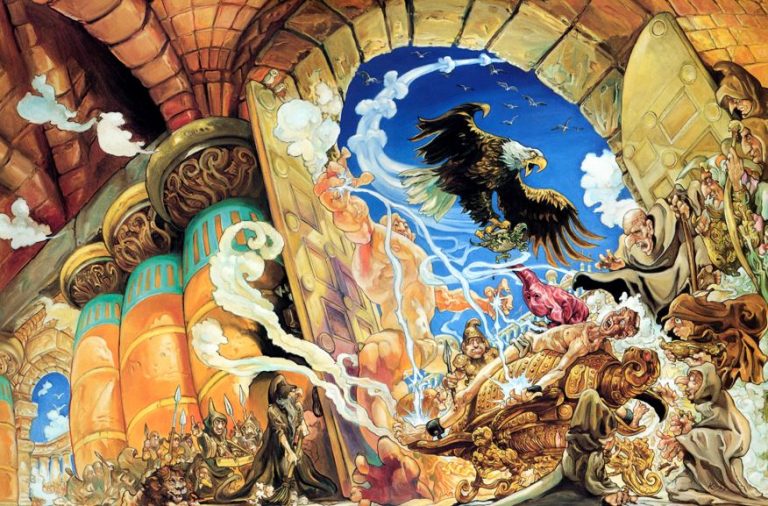 ‘Small Gods’ is, like ‘Mort’, one of those books that is constantly recommended to new readers as one of the best places to start with Discworld.

It contains the most in-depth treatise on religion that Pratchett had written in the series so far and, if my memory doesn’t deceive me, no other later book goes into quite as much detail either. In some ways, it seems strange to me that Pratchett would have waited until the thirteenth book in his series to have made his first real comment on religion, when understanding religion is such a fundamental part of understanding any society and the people in it. Then again, by the end of the book, you will reach the conclusion that whilst the names and the details change, the stories never do. We’ve heard it all before.

’ centres around Brutha, a novice in his Citadel, who it turns out is, in a religion of thousands of people, the only true believer of his god, Om. Om comes to him, in the embarrassingly un-god like shape of a tortoise, and together they embark on a journey that takes them through a shipwreck, a desert and a war, all whilst grappling with the heavy notions of what it is to be a god, to truly be a believer and trying to convince people that there is not, in fact, good eating on a tortoise.

There are moments when this epic re-read is really paying off, and reading ‘Small Gods’ so quickly after ‘Witches Abroad’ is one of them. You may remember from my last article that I was particularly interested in the idea of stories being told over and over again, having to be told a certain way because that was the way they had always been told; Granny Weatherwax had to be the good sister, because Lilith had chosen to be the bad one. ‘Small Gods’ opens with a very similar idea; here we have the history caretakers, who exist to make sure that things which should happen in history do happen, at the right time and in the right order. This is one of those themes I talk about sometimes; Pratchett doesn’t throw around words like ‘free will’, ‘destiny’ and ‘fate’, but that is what is being discussed.

By calling it ‘stories’ rather than ‘history’, the witches seem to deal better with the idea that life is predetermined and the stories will be told again and again. They understand that everything happens for a reason, and they make it work to their advantage. Om and Brutha struggle, however, with the concept of ‘history’. Om was once a small god, who displaced the previous god on his continent, and now he is threatened himself with the idea that he will become a small god once more. He rails against this, fighting every step of the way, until both he and Brutha come to that same realisation; things happen for a reason:

“Everything happens because it has happened before.”

For two books that are seemingly very different, ‘Witches Abroad’ and ‘Small Gods’ create a coherent discourse and debate, between them, very similar territory.

In discussing the effects of religion on the people who practice it, and the people they force to practice it too, Pratchett makes some stark comments that are just as relevant, and possibly even more so, than they were in 1992 when this book was published. From the very beginning, he highlights the hypocrisy that can infect large scale organised religion; why else would Om have a sole believer if this was not the case? The people of the Citadel are far more scared of Vorbis, the head of the inquisition, than they are of their god. They pray because they know they have to pray but, deep down, they do not believe anyone is listening.

It would be easy to read this as condemnation of religion on a whole, the ease of being caught up in a system of beliefs that you may not even truly subscribe to. However, later on, the atheism of Sergeant Simony and his brethren is shown to have evolved just as starkly into another system of beliefs that is blind to anything which threatens it; as Simony says dismissively, “You can’t inspire people with facts.” If Pratchett has any comment to make here, I would say it is a general one, a warning against becoming so caught up in an ideal that you are unable to see the world in a different way. For a man who it seems to me has always been remarkably humanist, this is perhaps one of the strongest statements of his own beliefs that Pratchett has made thus far.

“What have I always believed? That on the whole, and by and large, if a man lived properly, not according to what any priests said, but according to what seemed decent and honest inside, then it would, at the end, more or less, turn out all right.”