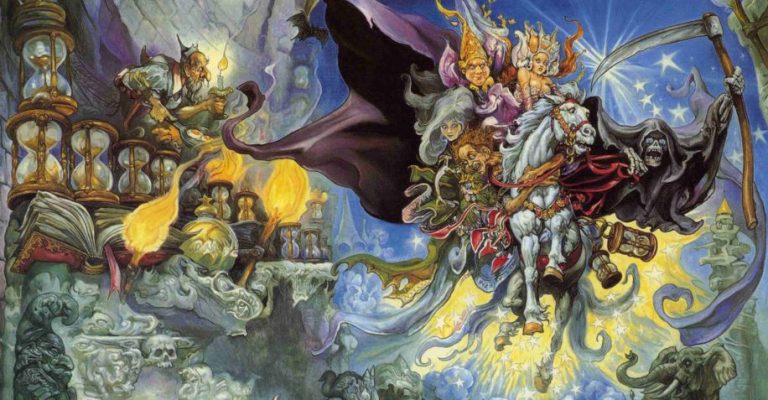 GATHER ROUND MORTALS, FOR NOW IS MY FIRST APPEARANCE IN THE WORLD OF THE DISC.

Well, it’s not Death’s very first appearance – he has, after all appeared in all but two of the Discworld novels, but this is the beginning of the ‘Death Arc’ and the first time we really spend any time with him as a character. I think the fact that Death is one of the most fleshed out, sympathetic characters in the whole series tells you everything that you need to know about Discworld and the delight that Pratchett takes in inverting the norm. If Granny Weatherwax was Pratchett’s muse, Death was his closest companion; I doubt any fan will ever forget the tweet in the wake of Pratchett’s death, written in the voice of Death himself. Nothing could have been more fitting.

AT LAST, SIR TERRY, WE MUST WALK TOGETHER.

To ‘Mort’ then, the fourth in the series. When I was first discovering Discworld, ‘Mort’ was the title that kept coming up as the best place to start, although I never followed that advice. On doing some informal research now (stalking Tumblr and Goodreads) it seems that a lot of people agree on ‘Mort’ being one of the best in the series. I’ll be honest though; I didn’t like it that much the first time round. I liked Death, but then it is difficult not to like him, he is so warm, so endearing, so funny. It was everything else that I didn’t much care for; Mort as character was not my favourite, although I liked him more than Rincewind, and the story didn’t quite make sense to me. If it had been the first book that I picked up, I cannot say for sure that I would have carried on with the rest of them.

So I’m pleased to say that, the second time around, ‘Mort’ was much more enjoyable for me. One of the few criticisms I could have for Terry Pratchett is that sometimes the stories become a little too complicated, especially towards the end. It really helped me this time round to know what was coming, and I don’t think any of the subtlety of the story was lost. If anything, it did make it that much better because I was confident in what was going on.

Mort also became a lot less irritating this time around, and I am surprised that he never made another appearance. He seems like the sort of character that, had Pratchett invented him ten years later, would have been featured again, like an early Moist Von Lipwig. As it is, all we ever hear of him again is his own death in ‘Soul Music’, twelve books later. He did remind me of Moist a little, this time around; he’s less scheming, of course, and is in no way as morally dubious as Moist, but he is cast into a new world and a new job with basically no training and no one to help him. Both are armed with their wits and the help of an excellent female character, and that’s about it. If Mort was Pratchett finding his way in the Disc and Moist Von Lipwig was the result of that, I can accept why Mort himself never made a second showing.

In terms of style, the main thing I noticed is that one of my main gripes from the first three novels – the fact that Pratchett has a habit of repeating himself a lot – has been put to a stop here, and that Pratchett even comments on it, like he has suddenly realised he was doing it. It’s self-conscious writing and it shows a respect for the reader; he knows that they will have noticed and he makes no apologies for it, but does accept he was doing it. Pratchett had a high opinion of his readership and his fans, and even at this early stage of Discworld, that fact is wonderfully illustrated here.

Favourite Quote:
“He was determined to discover the underlying logic behind the universe. Which was going to be hard, because there wasn’t one.”