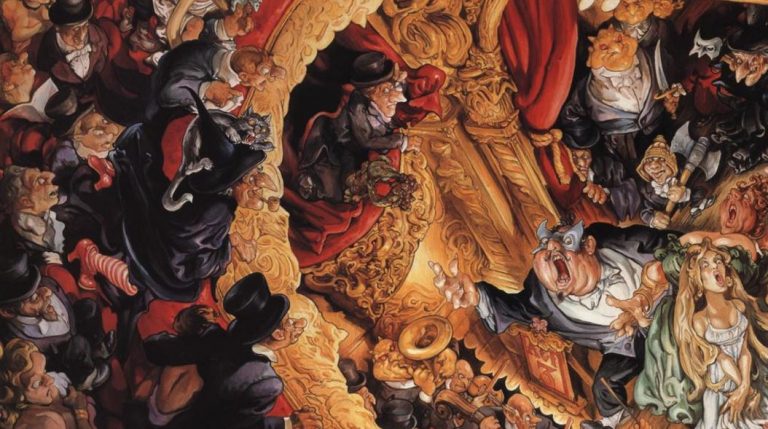 Before I begin talking about ‘Maskerade’, I should probably admit something to you all; I completely and unashamedly love ‘The Phantom of the Opera’, which this novel parodies quite explicitly. I tell you this because you should probably bear this in mind as I ramble on about this book. I will do my best to be objective, of course, but if I slip up, at least you know the truth about how I spend my spare time and can judge for yourselves.

’ is sometimes included on lists of what people dismissively call Pratchett’s ‘gimmick novels’, a list that usually contains titles such as ‘Moving Pictures’, ‘Soul Music’ and the later ‘Unseen Academicals’. In a lot of cases, I think that dismissing such titles as gimmicks dismisses some excellent work on Pratchett’s part; I am, for example, still hung on up the quote from ‘Moving Pictures’ that talks about the human tragedy of never finding what you are good at doing and being able to do it. ‘Maskerade’ is a parody, that is not disputed, but it is a clever one, and not without moments of brilliance. I first read it before I had discovered ‘The Phantom of the Opera’ and enjoyed it well enough, but on this second read, knowing the source material, I can say that, like most parodies, it is definitely better for knowing what is being sent up.

‘Maskerade’ takes place in the ‘witches arc’ of Discworld, and I am grateful for that; having battled through ‘Soul Music’ and ‘Interesting Times’, the last witch novel seems like it was a long time ago. At this point in the series, almost half way, I think I can say with certainty that the witch stories are the most consistent in pacing and quality – with perhaps the early exception of ‘Equal Rites’ – and there are the same distinctive features and themes represented here that I have brought up before.

Pratchett returns to his use of the ‘Macbeth’ parody that opened ‘Wyrd Sisters’, a clever move because it hints subtly that this story will be of a similar vein to that one, and it is; ‘WS’ addressed the theatre, ‘Maskerade’ deals with the opera and all of its eccentricities. There is also the familiar discussion in this novel about good and bad, the nature of evil and the price of being good. Agnes says that she does not want to be a witch because ‘they [witches] think that just because they’re right that’s the same as good!’. Late in the story, confronting the Ghost in the theatre, Granny says, ‘The trouble is, you see, that if you do know Right from Wrong you can’t choose Wrong. You just can’t do it and live’”.

It is a topic that has come up before, but the choice the witches make every day, especially Granny, is such a defining part of her character that I do not think it hurts the reader to be reminded of it. Granny barely clings to her humanity and she knows it, so it is important that we know it too. If I was following this arc for the first time, I would begin to doubt her ability to hold onto to herself.

I often get carried away thinking about Granny in these articles, but here I really need to talk about Nanny Ogg. Granny has her power but Nanny has skills of her own, which her friend notes in this story; how Nanny can make herself at home in any environment, fit right into places she has no right to be and know all about people and their families within a few hours of meeting them. People trust Nanny and they tell her things, in a way that they would never tell Granny. Nanny figures out the identity of the Ghost before Granny even mentions that she has an idea, and her contribution to the whole affair cannot be discounted. Where Granny battles with her humanity, Nanny has so much that it is overflowing. She has moments of really quite cutting irony, such as when she tells the mob that they need flaming torches if they are going to hunt a monster, irony that comes from an empathy that she feels for the victim, for the hunted one. Nanny Ogg is quite possibly Pratchett’s most big hearted main character, and if I had to choose one of the witches to trust, I would pick Nanny every time.

Favourite Quote:
“It’s a cruel world for old ladies,’ said Nanny, matriarch of a vast extended tribe and undisputed tyrant of half the Ramtops.”