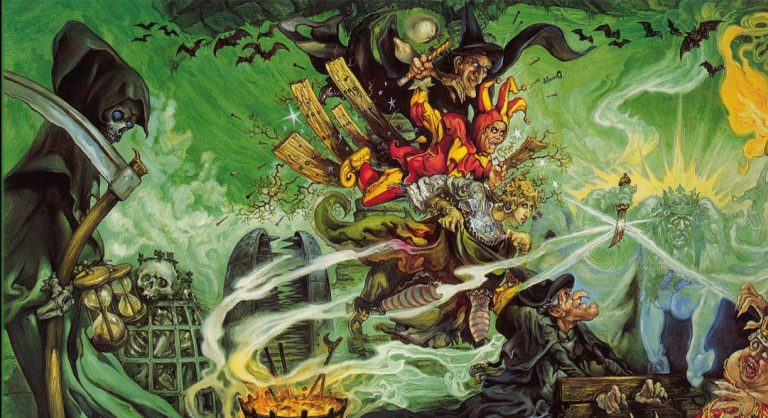 We first met Granny Weatherwax in ‘Equal Rites’, when she was a supporting character, less a major player than a bit part. In ‘Wyrd Sisters’, the first real outing for the witches of Discworld, she takes centre stage, the only place really that Granny should be.

She is joined by the other members of her coven, Nanny Ogg and Magrat Garlick. Nanny Ogg really needs no introduction – think of heavy-drinking, chain-smoking, innuendo-making alpha female of a tribe of relatives, and you’ve got the picture. Magrat is the young witch attempting to keep the older pair under control and generally failing miserably. I’m not sure if it is because there are fewer witches to keep track of, or if Pratchett just liked them better, but they are much more engaging characters than the tangle of Unseen University wizards, who I don’t think I could even reliably name at this stage in the series. As far as larger than life characters go, these three are right up there.

‘Wyrd Sisters’ is the first parody novel of Discworld, sending up ‘Macbeth’. You’d need to know the story of ‘Macbeth’, as with any parody, to really get the jokes and references, but there is plenty here that does not rely on you being up to scratch with your Shakespeare. ‘Wyrd Sisters’ is probably the easiest story to follow so far; kings, murder, secret identities, witches and ghosts is the name of the game here, as well as that most Shakespearean of things, a play within the story. In this case, the play is written by the dwarf, Hwel, and tells a story a little too close to home for the new king of Lancre, who murdered the previous king and took his place. Sounding familiar? If you know anything about ‘Macbeth’, you’ll love this book.

The presence of the witches here is a counterpoint to the wizards of the previous novels, but really they are two sides of the same coin, with the same problems. They are in a constant battle with magic; for all that Granny says that ‘Magic’s there to be ruled, not for ruling’, it seems to me at least that magic is barely controllable at all. The witches and wizards are the only thing keeping the disc from descending into chaos, and their importance should not be underestimated.

I really like how Pratchett’s main characters share similar veins of philosophical thinking – I can only conclude that they are voicing the wisdom of Pratchett himself – and there’s a stark example of that early on in this novel. If you remember, in ‘Sourcery’, Rincewind told Coin to never let anyone else tell him who he was, and Granny makes a similar statement here; when asked to give Tomjon a gift, she decides that he will be able to ‘be whoever he thinks he is’. It’s an important message but it, and the other shared philosophies, do more than give some good advice; they tie together the scattered characters of the disc and help to give a coherency to the whole thing that might be lost in a work of art so vast as Discworld. There’s a brief mention again of witches not being able to go home, which has come up at least twice already, but I liked that these three witches at least ‘[go] just the same’. This is the major difference between these witches and the wizards we already know; the witches are far too practical to be tortured by the demands of the job.

My absolute favourite thing about this story though, being a theatre nerd and a Shakespeare fan to boot, is the thoughts that Granny has about the theatre when she is watching Hwel’s play. It is a wonderful tribute from Pratchett, one that pays a huge amount of respect to the genre that he is parodying; ‘The theatre worried her. It had a magic of its own, one that wasn’t in her control. It changed the world…And it was worse than that. It was a magic that didn’t belong to magical people. It was commanded by ordinary people who didn’t know the rules.’ Magic comes in all shapes and sizes, and none of it should be dismissed as being worth any less than the rest. The wizards are book-smart, the witches grounded and in touch with nature, but mere words can do things too and should not be forgotten. It is telling that the theatre is the magic which triumphs in this story, above all the others. It is the play which forces the new king to confess his crimes, a play written by a neurotic perfectionist of a playwright and performed by the novices of a theatre company who are on tour to learn the craft more than to wow their audiences. If this is a magic I can have a part of, I’d choose it over any other, and I don’t think I am going too far in saying that I believe this is exactly the conclusion that Pratchett wanted me to reach.

Favourite Quote: I’ve already told you – it’s the paragraph about the magic of theatre.