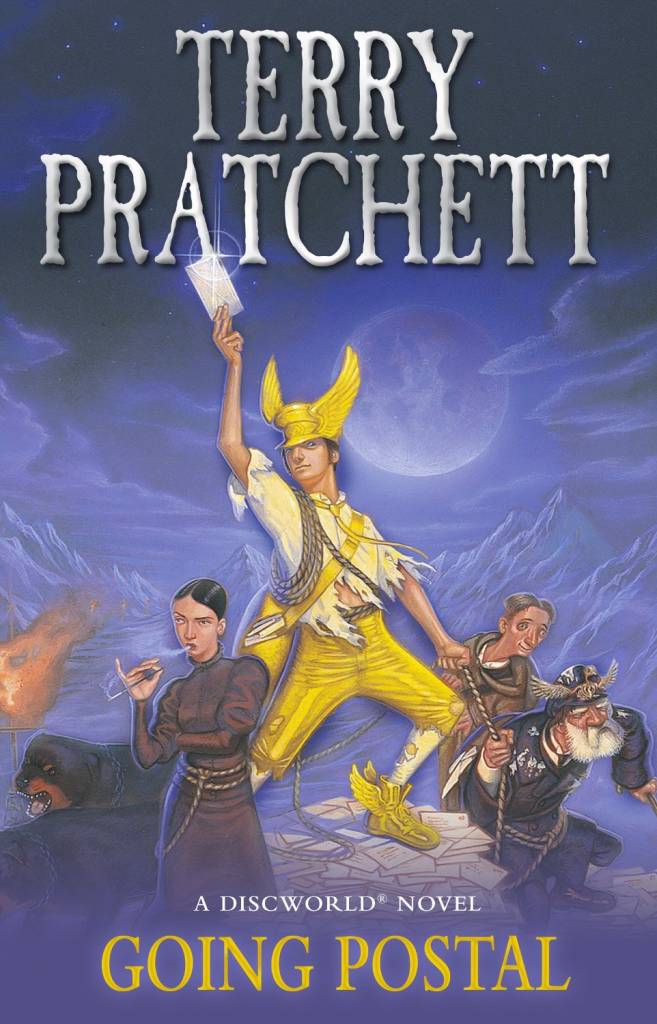 In one of those helpful coincidences that have followed me through this endeavour, I finished reading Going Postal on the day that the BBC aired their docudrama ‘Back In Black’, celebrating the life of Sir Terry in all of its glory. This is a coincidence because this documentary is an example of a name living on, a man not forgotten, and that happens to also be one of the themes addressed in Going Postal.

The clacks, a kind of advanced system of semaphore, sends messages across the Disc at top speeds, and when a clacksman dies in the line of duty, he is ‘sent home’ in the lines. It’s a bit complicated but basically it means that as a long as a message is being passed up and down the line – ‘GNU John Dearheart’ is the example from the book – a man hasn’t really died. When Sir Terry passed almost two years ago, some of his most dedicated fans created web extensions that would put the banner ‘GNU Terry Pratchett’ all over the net and ensure that he is never really gone. As far as tributes to the great man go, Going Postal was responsible for by far the most poignant.

Going Postal is also responsible for the introduction of one of the most popular characters of the later Discworld novels, Moist von Lipwig. A small time but prolific conman, the novel begins with Moist being hung and then waking up, which is where his problems really start. Lord Vetinari puts him in charge of the crumbling Ankh-Morpork Post Office, which is being choked by the weight of its own bureaucracy and the pressure from the clacks, which can deliver a message in hours rather than months to the far ends of the Disc.

Moist starts the novel as a not particularly good person and ends it a hero; it’s a similar trajectory to other Discworld favourites, notably Sam Vimes and William de Worde, but I don’t feel like the arch has got old. If anything, these Ankh-Morpork based novels have presented an interesting picture of a city that is slowly improving itself, one official at a time. Lord Vetinari and Commander Vimes have taken a while to get here, but they are running a city with lower rates of crime and higher quality of life than ever before.

William de Worde runs a large free press, and here Moist joins their ranks as an equal opportunity employer, visionary thinker and actually quite nice guy, once you get to know him. It is a quartet of characters, along with Archchancellor Ridcully and at least some of the guild leaders who are starting to inspire this real progress. When the corrupt leaders of the clacks company are ousted at the end of the book, you get a real sense of moral outrage from most of the leaders mentioned here. Lord Vetinari may be the tyrant, a fact he still likes to remind people of, but he’s also remarkably liberal in his thinking.

This liberal approach to politics means that the issues of racism and stereotyping that were present in early novels has basically been eradicated in the city. Moist employs golems, the last race to be integrated into the fabric of the city, without a second thought, and really does want to know how to treat them correctly.

Adora Belle Dearheart, the human face of the golem employment agency, says that Commander Vimes will employ anyone in the Watch and turn out a solid copper at the end of it. Lord Vetinari employs Mr Pump, another golem, as Moist’s probation officer. It’s a cynical approach, in many ways, but it also assumes that all races of creature have their own strengths that can be put to use, as long as they wish to work. I think it’s an attitude that a lot of real life people could definitely consider adopting.

I’ve already briefly mentioned Adora Belle, the spiky object of Moist’s affections, but I’m going to talk about her a bit more because she is perfect. Imagine a mix of Susan, Death’s granddaughter, and Granny Weatherwax and you have someone close to Adora Belle. She’s watchful, purposefully cold and very straightforward in her thinking and her approach to anyone who isn’t a golem. Moist is captivated by her because she isn’t captivated by him and spends a good two thirds of the book attempting to get a date with her. It’s only when the reader can see he has improved as a person that Adora Belle sees it too and then consents to go out with him. A girl could do a lot worse than to take Adora Belle as a role model. Just saying.