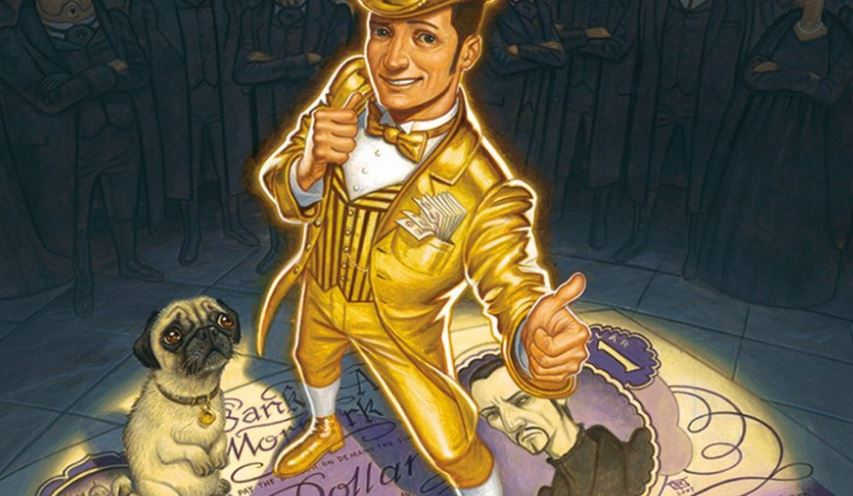 When last we saw Moist von Lipwig, he had successfully resurrected the ailing Post Office, defeated the evil owners of the clacks company and finally got a date with Adora Belle Dearheart. The beginning of this book finds Moist restless and unsure of his role in the now highly efficient Post Office.

He’s scaling walls, just for old times’ sake, and buys himself a set of lock picks just to have in his pocket, no other reason. Lord Vetinari blames this behaviour on the fact that Adora is out of town and not there to supervise her fiancé, but I like the fact that Moist, although reformed in many ways, keeps hold of a little bit of who he used to be. I like a redemption arc as much as the next person, but I also like a character who doesn’t forget his roots and where he came from.

Vetinari puts Moist in charge of the Royal Mint, in an attempt to keep him on task and Moist, of course, is excellent at this. He introduces new paper money with the speed and ease that he introduced the stamps in ‘Going Postal’. When the chairman of the Royal Bank of Ankh-Morpork unexpectedly dies, she gives Moist custody of the new chairman, a small and hairy dog called Mr Fusspot. Lots of people want Mr Fusspot out of the job, and Moist must do battle with them as well as attempting to run a bank that actually has money coming in and out of it, dealing with a head banker who is a bit odd and with Adora Belle, who returns from her trip with a strange story about an army of golden golems. You don’t have to be a Pratchett devotee to know what turns up in the city a few days after her return.

For all that it mirrors ‘Going Postal’, or at least follows a similar basic plot, I didn’t really enjoy ‘Making Money’ all that much. It is one of the few books that I have struggled through on this re-read, and definitely the most recent. I’m not even sure I could say why I had a hard time. Moist, Adora and Vetinari remain as entertaining as they have always been, and there’s a healthy dose of other Ankh-Morpork favourites to shake things up, including Commander Vimes and Archchancellor Ridcully. I am not, admittedly, very interested in economics or finance as a concept, but I don’t feel like Pratchett is at any time trying to beat you over the head with them. It’s been a few days since I finished the book now, and I still haven’t figured it out, so I probably won’t. I wouldn’t encourage anyone to skip it though, if I was pressed. It’s still a good book.

I did like Vetinari in this novel and want to talk about him in a bit more detail. He’s becoming more human as the time goes by and more characters spend time with him, and his sense of humour is one of my favourites across the entire range of Discworld books. We see him in a rare moment of downtime here, completing the Disc equivalent of Sudoku and complaining that the newspaper used the same puzzle several months earlier. It’s a human moment for him, particularly when he only manages to finish the puzzle in seventeen seconds and admits that it has been a ‘tiring day’. Later on, he asks Moist if he needs a badge that reminds people he is a tyrant, after the latter once again goes rogue and does his own thing. It’s funny, but it also serves as an interesting reminder that Vetinari looks less and less like a tyrant as the series progresses.

He is a very different man to the one we met way back in the early days of the Watch novels. There’s always talk of the punishments that the patrician is capable of dealing out, but he also appoints the best people to the positions of power, regardless of their history, and he runs the city by committee. I’ve mentioned before that the new Ankh-Morpork is looking very strong with its competent leadership and dedicated, smart civil leaders, and we can’t forget that Vetinari has been completely responsible for the building of that. The people he has chosen – Vimes, Moist, William de Worde – have never blindly followed his lead.

Vimes has fought him at every turn, Moist and William disobedient to say the least, but as long as they do the best job they can, Vetinari lets them get away with it. He can go about reminding people that he is a tyrant as often and as loudly as he likes, but as we enter the final stretch of Discworld novels – only five to go! – the real success Vetinari enjoys is the comfort of the world he has built and the strength of the city he calls home.