It's not all superheroes. 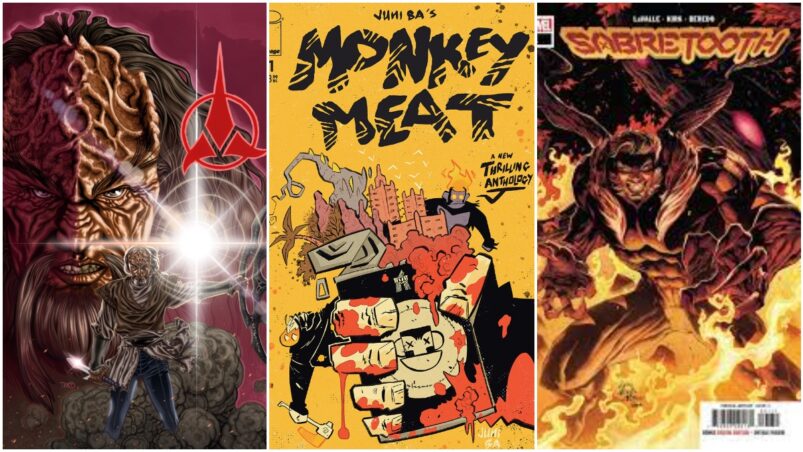 10 Exciting First Comic Issues On The Horizon For 2022

Whether we felt ready for the year or not, 2022 arrived with fireworks lasting for far too many hours on New Year’s Day. The past few years of tragedies may feel oppressive. Fortunately, if you’re reading this, you are blessed to be living in the digital age. We have technology, for better or for worse, which means we have access to movies, books, and comics in an abundance that defies comprehension. The paper supply shortage has stifled comic book production. Though it remains an issue, comic book, manga, and graphic novel sales, digitally and physically, are still soaring to record heights.

In the comic book world, there’s a lot to look forward to in 2022. Saga finally returns from its three-and-a-half-year hiatus with issue #55. Superhero Naomi is back after an extended break in Naomi: Season 2. Marvel Comics are cranking out more X-Men comics than ever before, along with the multiple-book ‘Devil’s Reign’ Daredevil event. Bolster your spirits by discovering a new comic in 2022 that may end up prevailing as a new favourite series.

Technically, Cat + Gamer Vol. 1 is the first volume of a manga, not a first “issue” in comic terms. Individual tankōbon, or Japanese manga volumes, comprise chapters within the book. However, since Dark Horse Comics licensed the manga to publish in the English language for the first time beginning in March, Vol. 1 counts as the first English-speaking introduction to Cat + Gamer.

This humour manga is touted as a series combining cats and video games. If you love both of those things, you’re probably hooked already and don’t need any synopsis to convince you to pre-order the first volume right now. Cat + Gamer features 29-year-old video-game obsessed Riko. According to the solicit information, Riko would much rather stay at home all day playing video games than interact with the outside world.

As the title implies, this is a story about a gamer and a cat.Riko’s life changes when she uses her video game knowledge to learn how to take care of her first pet: an adorable tuxedo cat. Tell every cat lover in your life about this manga. Cat + Gamer sounds like the purr-fect winter read.

The first issue was already released in comic shops at the start of the year. But Cowboy Bebop devotees mourning the live-action adaptation cancellation of the eponymous anime should start 2022 on a high note and read a copy of the comic book version of the show. The comic book series adaptation of Netflix’s Cowboy Bebop is helmed by the spectacular creative duo of writer Dan Watters and artist Lamar Mathurin.

Cowboy Bebop started as an anime that received a manga adaptation. This series from Titan Comics takes fans back to the page where a bounty hunter crew of the spaceship Bebop tracks an ex-gang member. Netflix may have pulled the plug on the 2021 streaming series, but you can delight in revisiting the sci-fi epic stars and their high-octane adventures in this first issue. Actors John Cho, Mustafa Shakir, Daniela Pinada, and the rest of the cast also receive the illustrated comic book treatment with Mathurin’s gorgeous artistic renderings.

Slated for an early 2022 release date, Vault Comics is adding a thought-provoking fantasy tale to its line-up. Popular Vault Comics writers Tim Daniel (The Plot) and David Andry (Resonant) team up with an all-star creative team for End After End. The creator’s name alone should heighten your expectations.

End After End #1 launches the story of Walter Willem, an unremarkable man who dies unexpectedly and awakens in a fantastical afterlife. The solicitation remarks how the ordinary Walt meets his end quickly, yet his life continues in death. Walt finds himself conscripted into the End After End, an eternal war waging against a “darkness hellbent on consuming all of existence.”

End After End sounds like a fantasy story grounded in reality. The cost of war is high, second chances are attainable, and the five-issue comic series follows a man, not unlike ourselves trying to carve his mark on the world. Tim Daniel promises no complicated or confusing magic systems, buoying End After End’s mass appeal through accessibility.

Vault Comics solicitations have proved so intriguing, there are two of their upcoming first issues on this list. Sci-fi comic Fox and Hare #1 reclaims the cyberpunk genre with Asian creators writing a story with Asian characters.

Asian aesthetics have inundated cyberpunk media and stories for decades without reflecting any Asian representation in its protagonists. Fox and Hare #1 stars rebellious Asian black market coder Aurora Yi. After a breach, Aurora uncovers information about data that can tap into the past lives of the world’s citizens. A pair of brutal mercenaries, the Fox and the Hare, offer protection for Aurora after a corporation hunts her down to obtain the data she has stolen.

The cyberpunk action series boasts shiny, futuristic visuals with a reclaimed narrative about technology and justice.

Juni Ba’s Monkey Meat comic shook the comic industry already with its first issue soon after New Year. Monkey Meat #1 started the new year off with hooting and hollering with a reach that will surely echo through all of 2022 as each issue releases. Creator Juni Ba takes on every creative duty, acting as a triple-threat writer, artist, and letterer for the Image Comics’ anthology fantasy series.

Head to the native island of a meat packing company for a monkey-ridden vacation in Monkey Meat #1. After overtaking the real natives and forcing them to sign away their lives, the Monkey Meat Company turned the former paradise into a corporate fortune.

Juni Ba fires on all cylinders with this opening issue. Richly textured art vibrantly relates the chaos found in maintaining an exploitative capitalist culture funded through colonization and greed. Replete with fourth wall breaks and bipedal monkeys, this is an imaginative comic book masterclass in iconography.

It’s a planet of monkeys this year as the primate appears in the title of the upcoming DC Comics series, Monkey Prince. Debuting in February on the Lunar New Year, Monkey Prince #1 kicks off a 12 issue maxiseries extending its reach through 2022 and beyond.

Written by prolific comic creator Gene Luen Yang and featuring authentically drawn Chinese characters by another Chinese artist, this is a comic that should be flying high on your radar. Everything Yang puts out prevails as thoughtful, brilliant, and rife with complex subversions of the superhero genre.

Son of Sun Wukong, the Monkey King, Marcus Sun enters Gotham City High School as the new kid in school. One day, the eponymous Monkey Prince encounters an eccentric man sporting pig features, who intercepts Marcus – as if he already didn’t have enough problems fitting in at school and being raised by two evil henchmen. Monkey Prince #1 satirically follows the thrilling adventures of the shapeshifting superhero connected with the Journey to the West Chinese novel.

I’ve waxed poetic about my affinity for horror comics before, so this list had to include an eerie entry in the genre. Adapting author Joe Hill’s acclaimed novella, Rain #1 emerges as the disturbing first issue for the Image Comics 5-issue horror miniseries.

The story begins in Boulder, Colorado, where young couple Honeysuckle and Yolando are about to begin their lives together. But the possibilities drifting on the open landscape are crushed when a storm releases a downpour of sharp nails instead of rain. An apocalypse falls from the sky in Rain #1, the skin-destroying nails threatening the world.

Not only does this premise promise romance, tears, terror, and survival, but my interest was cemented when I found out rising artist Zoe Thorgood illustrates the series. I know I’m not the only one anticipating seeing her trademark horror suffusing the pages in Rain.

Since the X-Men relaunch in 2019 beginning with House of X/Power of X, the ripple effects from that series have spawned countless interconnected series about mutant-only existence on the island of Krakoa. This finally integrates one of Marvel Comics’ greatest unhinged mutants, Wolverine’s archenemy, Sabertooth.

Victor Creed was last seen way back in House of X #6. Sabertooth #1 swings back in time to revisit the Krakoan Council’s decision to send the murderous Sabertooth into the island’s Pit.

With this new Sabertooth series, readers are treated to a story unearthing the mystery behind Victor’s tenure down in the tormenting prison. Admittedly, Sabertooth has been a favourite character of mine ever since watching him battle Wolverine in the X-Men: Evolution television series. Readers are sure to wonder what Sabertooth has been doing in the Pit of Krakoa out of sheer curiosity. We should also recognise the laudable names attached to this project, such as Victor LaValle and Leonard Kirk, leaving Sabertooth’s first series in decades in good hands.

This oversized issue chronicles the life of the barbaric Klingon warrior, Kahless the Unforgettable. One of Star Trek’s most formidable foes, the Klingons have warred with the Federation throughout the franchise. Here, readers can look forward to discovering Kahless’ origin story. Trekkies, relish in this sci-fi history story overflowing with Star Trek lore and art that pays honorable homage to its live-action counterparts.

AHOY Comics again proves themselves as worthy contenders in the trenches of multiverse, universe-shaking stories with their new one-shot anthology series. The Wrong Earth began with the publication of The Wrong Earth #1 in 2018. After a prequel series and two chronologically linear comic volumes, AHOY is keeping its Wrong Earth portals open for even more satirical superhero comic issues.

2022 marks the AHOY Comics debut of industry giant Gail Simone with The Wrong Earth: Trapped on Teen Planet #1. Brooding vigilante superhero Dragonfly is transported to an Earth where teenagers run amok. The solicit mentions malt shops, satire, and love triangles – the kitschy, pop-art coloured antithesis to everything Dragonfly stands for.

The Wrong Earth has not wavered in its subversive commentary and hilarity for years. By opening the series to a plethora of creators, AHOY offers expansive new takes on the innovative superhero comic.

READ NEXT: 15 Highly Anticipated Comic Trades To Read In 2022