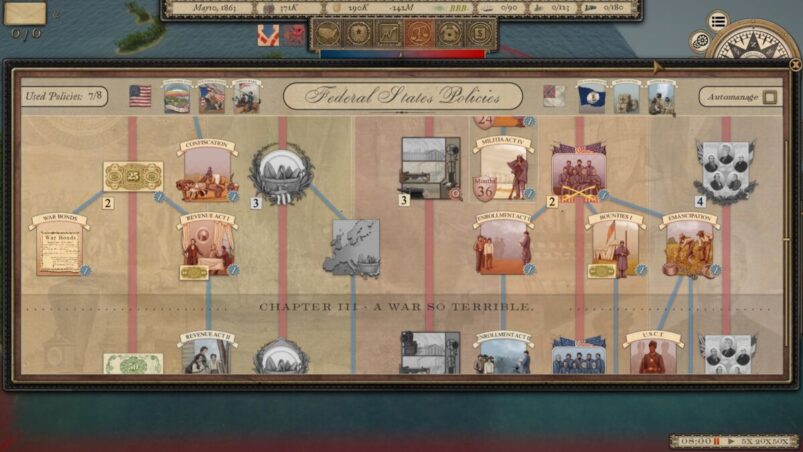 Any war needs political and economic support to keep armies fielded and navies afloat. Aside from making plans to defeat the enemy in the field and take over their territory, Grand Tactician: The Civil War (1861-65) players will need to enact policies that will affect every aspect of the war effort. To help players get an understanding of the various effects their policies will have, we compiled this helpful guide to get you started.

Here are the five main policy areas in Grand Tactician:

Policies can be split into two types: edicts and acts. Edicts are the core policies players can pass to support their war effort and players will only ever be able to have up to ten active edicts at any given time, so it’s important to plan out and prioritize particular areas of interest. In the policy screen, edicts are represented by a connecting red line.

Acts are smaller specialized laws that can have both positive and negative effects. Unlike edicts, players can pass into law an unlimited number of acts. Acts are represented by a connecting blue line, most of which are connected to an edict that needs to be passed before activating it.

Here’s everything you need to know about policies in Grand Tactician: Civil War (1861-65).

The Funding policy tree focuses on the government’s ability to acquire money to fuel the war effort. The economy system in Grand Tactician is modeled based on a debt framework, meaning the government relies on a system of credit, loans, and borrowing to pay for its policies. Most funding acts and edicts will typically affect the player’s credit rating, where the higher it is the more the player can recruit, build, and keep up the war.

Agricultural policies affect the level of subsidies the government can put in to incentivize growth in the agricultural sector. New farms and related businesses will increase the overall wealth of the country, as well as increase the amount of trade exports from new businesses. Additionally, some of these policies may have diplomatic effects, such as enticing the European powers to intervene or remain neutral.

Industrial policies do the same as the agricultural ones, except for sponsoring the development of industry-related businesses, such as ironworks, brickworks, and armories. Most importantly, industrial edicts will unlock new weapon and ship types, as well as increase their production rate, which is absolutely vital to equipping the player’s armies. This is one of the simpler policy trees as there’s only a few additional acts for the player to consider.

To improve recruitment and reorganize the army, players will need to invest in the Military tree. Here they will find acts and edicts that increase the total number of recruits per state, as well as unlock drafting or bounty acts if governments are especially desperate. The most important edict in this tree is the Military II policy, which will reorganize the army and give the player additional options when composing their forces.

Alongside the Industry tree, the Diplomacy policy line is also the simplest, with barely any additional acts to activate. Contrary to its name, Diplomacy edicts don’t directly improve relations with the European powers that much and instead unlock the ability to import various exotic weapons to augment domestic production. Diplomacy policies do open the possibility for more government subsidies that inevitably lead to better relations with Europe.

A good combination of policies are critical to success in the US Civil War and there’s enough flexibility and enough limitations for players to experiment with. Equipped with this knowledge, it’s up to the player to get their cabinet to work and enact the right policies to see them to victory.