Keep it civil down below. 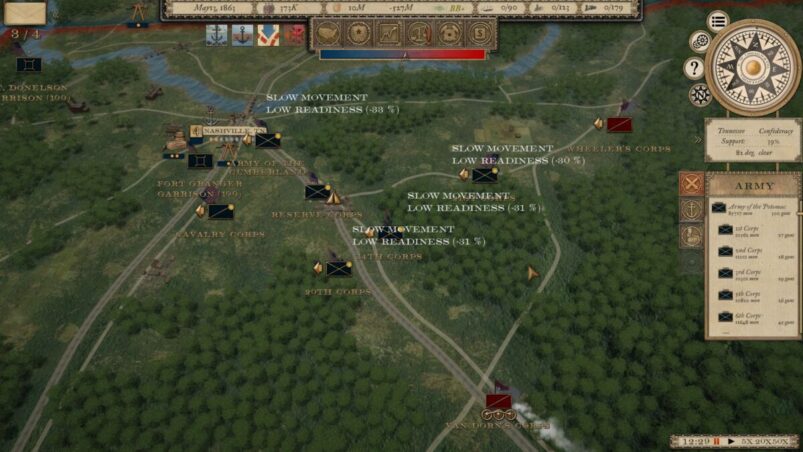 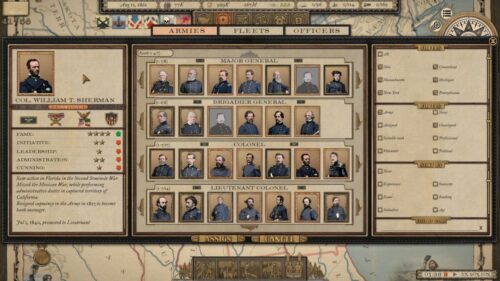 Hardcore wargames are an oft-overlooked niche of strategy games, as many of them skew closer to simulation games with their uncompromising loyalty to historical realism and complexity of mechanics, which can be highly intimidating for many players to even try. Recently some games of this type, such as Game Labs’ Ultimate General: Civil War and 2×2 Games’ Unity of Command 2, have taken major steps to innovate on accessibility options, controls, and tutorials, while retaining engaging gameplay depth. Does Oliver Keppelmüller’s Grand Tactician: The Civil War (1861-1865) follow suit and herald the arrival of a new generation of hardcore wargames?

Grand Tactician sees the player take command of either the United States or the Confederate States of America during one of the US’ most pivotal conflicts, the US Civil War, with the goal of breaking the national morale of the opposing country in order to win. Players can experience this momentous conflict in single-player campaigns only with various start dates and scenarios, or play through a number of real-time tactical historical battles.

The overall focus of the game rests on combat, logistics, and economics in a similar fashion to Paradox’s Hearts of Iron 4, without the more in-depth political system. Altogether, there’s a decent variety of content for players to check out, with easily hundreds of hours of gameplay in the campaigns alone.

Grand Tactician: The Civil War is an excellent example of the hardcore wargame subset, as it represents both the best that such strategy games have to offer and the worst. It’s a frustrating mixed bag because there’s clearly plenty of love and care put into the game and an excellent foundational core of gameplay, but it’s undercut by a chronic issue of terrible accessibility, which limits its broader appeal. Unfortunately, Grand Tactician does little to alleviate this problem and falls into a familiar trap, following many of its cousins and predecessors.

The game’s presentation reflects this mixed bag with the dev team going for a stylized approach for maximum immersion, which succeeds on the whole, but begins to show cracks when looking into the details. The visual design is a massive let down with the graphics being subpar at worst and serviceable at best. The audio design does fare marginally better, with period accurate music setting the stage and the rumble of cannonades and musketry giving battles life, though it does suffer from uneven mixing and unbalanced soundscapes that can be grating on the ears and break immersion.

Undoubtedly the best part of Grand Tactician is the gameplay. The strategic layer and the tactical mode are equally engaging with a host of systems that are historically authentic and compelling from a decision-making standpoint.

On the strategic layer, players will need to raise and manage armies, enact policies to bolster the war effort, fund government subsidies for critical areas of the economy, manage relations with the European powers, build military infrastructure, and engage in a trade war with naval blockades. All these systems are intricately connected and provide plenty of ground for creative thinking, theorycrafting, and planning. Once players get into the flow of the game, they’ll find that the gameplay is just as addictive as a good round of Civilization.

In addition, Grand Tactician does find a solid balance between micro and macro management, courtesy of the hands-off economic system and plentiful army orders that gives players the opportunity to lay out and execute their plans effectively. The real-time approach to the strategic layer also gives the campaign a sense of dynamism and helps keep it lively, while also emphasizing sound timing and extensive planning.

One area of strategic gameplay that’s unfortunately utterly broken is naval combat. I’ve consistently observed fleets of tiny river boats defeat full-sized squadrons of powerful frigates and their support ships with absolutely no convincing explanation given. This broken state comes from a combination of poor balancing and the game doing a terrible job of relaying critically relevant information. Generally speaking, the AI is a bit of a mixed bag on the lower difficulties as it’s way too passive and easily overwhelmed. On higher difficulties though, players will definitely be in for a challenge.

The real-time tactical battles are the most successful component of Grand Tactician. Combat is modeled quite authentically, capturing the challenges of operating a massive army as a sluggish machine that needs time to rev up and get going. All the battlefields are based on real Civil War battle maps and geography, which will provide a huge variety of terrain to fight over with great potential for maneuvering, flank attacks, massive frontal assaults, and all sorts of clever tactics.

There are a couple of minor gripes that slightly detract from the tactical experience. In the developer’s overzealous bid for realism, battles end up feeling unevenly paced with many periods of unengaging downtime. Battles could have significantly benefited from a few extra time acceleration options to minimize such down time.

The other gripe is the treatment of battlefield fortifications, as they are too readily available for all infantry to construct, especially in the early stages of the war. This does break some historical immersion as constructed battlefield fortifications became more prominent towards the latter part of the Civil War. More importantly, from a gameplay perspective, the ease of fortification construction can lead to samey and uninteresting battles, reminiscent of the first World War, about 50 years too early.

Alas, Grand Tactician’s great gameplay gives way to serious and egregious issues found in the horrendously inefficient and fiddly UI, complete lack of a functional tutorial, and poor presentation of information. Many hardcore wargames are already plenty dense in their inherently complex systems, and there’s no excuse for making the barrier to entry higher than it needs to be, especially if the game is trying to find an audience and expand. If anything, these are areas where hardcore wargames need to innovate within and Grand Tactician fails completely in this regard.

To add insult to injury, there are a host of graphical glitches, UI bugs with plentiful menu lockups, and awkward controls. Players will spend an inordinate amount of time fighting the game itself rather than fighting their actual AI opponent, keeping them away from the meaty decision-making core of the game. The classic strategy game design mantra of “easy to learn; hard to master” seems to have been lost in the production of Grand Tactician.

Performance-wise, while not a hugely taxing game, I constantly encountered frame stuttering on the strategic map when panning around or quickly zooming in, indicating that Grand Tactician clearly needs more optimization. The options menu is a mixed bag, mostly lacking a full list of rebindable hotkeys and advanced graphical options. It also desperately needs a functioning font size slider, as some text is way too small to easily read.

The worst options menu offender, though, is that UI scaling is broken with some menus going beyond the monitor’s borders if scaled too high. Luckily, Grand Tactician was bereft of any crashes during my playthrough.

Ultimately, Grand Tactician ends up being a run-of-the-mill hardcore wargame that fails to find an innovative breakthrough for its subset of strategy games. While it’s inarguable that Grand Tactician’s representation of history is mostly excellent and the gameplay is both authentic and addictive, the mountain of issues players will encounter and the effort needed to get to that solid core is prohibitively steep for a wide swathe of strategy enthusiasts. Ultimate General: Civil War remains the more enjoyable and definitive US Civil War-set strategy game overall.

Instead of feeling like a William Tecumseh Sherman or a Ulysses Simpson Grant while making sweeping ambitious plans and seeing them to fruition, players will feel more like Union rank-and-file soldiers at Fredericksburg facing the near impregnable Confederate positions along a stone wall. At its current price point, I can only recommend Grand Tactician to players excited about the setting or those who are comfortably familiar with similar hardcore wargames. 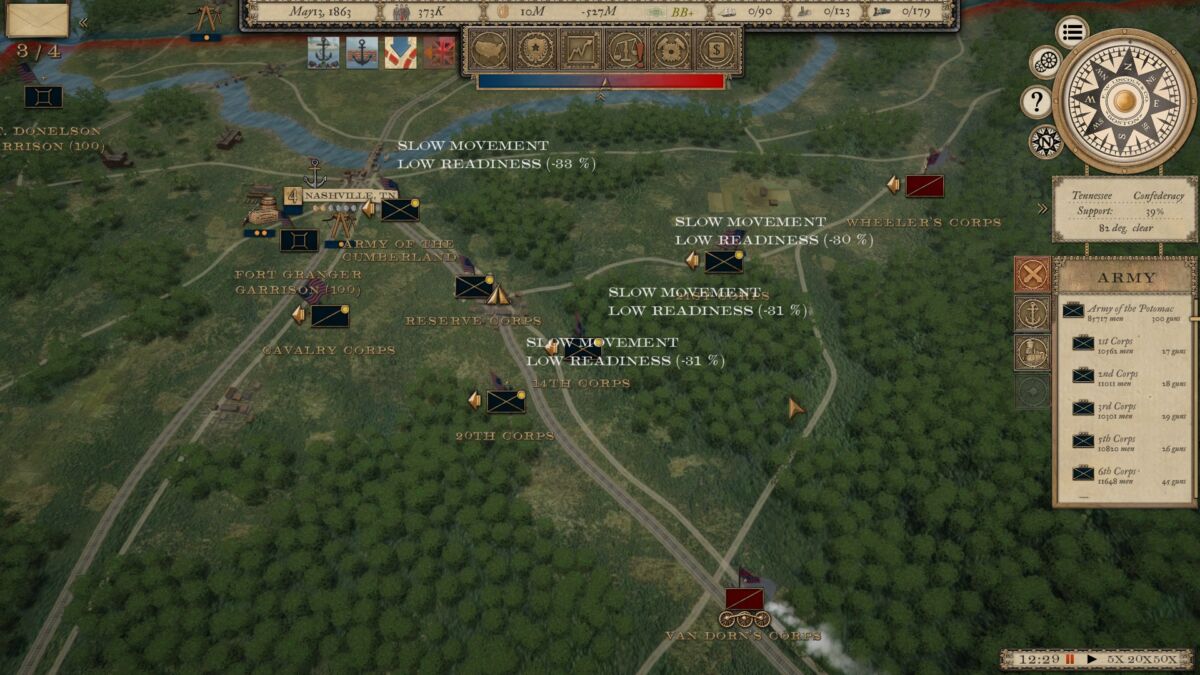 Verdict
Grand Tactician: Civil War 1861-65 is a solid historical wargame in its own right, but players will need to slog through a lot of mud and frustration to get to the meaty heart of the game.
6
Cultured Vultures is a pop culture website established in 2013 covering all things gaming, movies, and more. We eat your words.
All The News On The Biggest Games