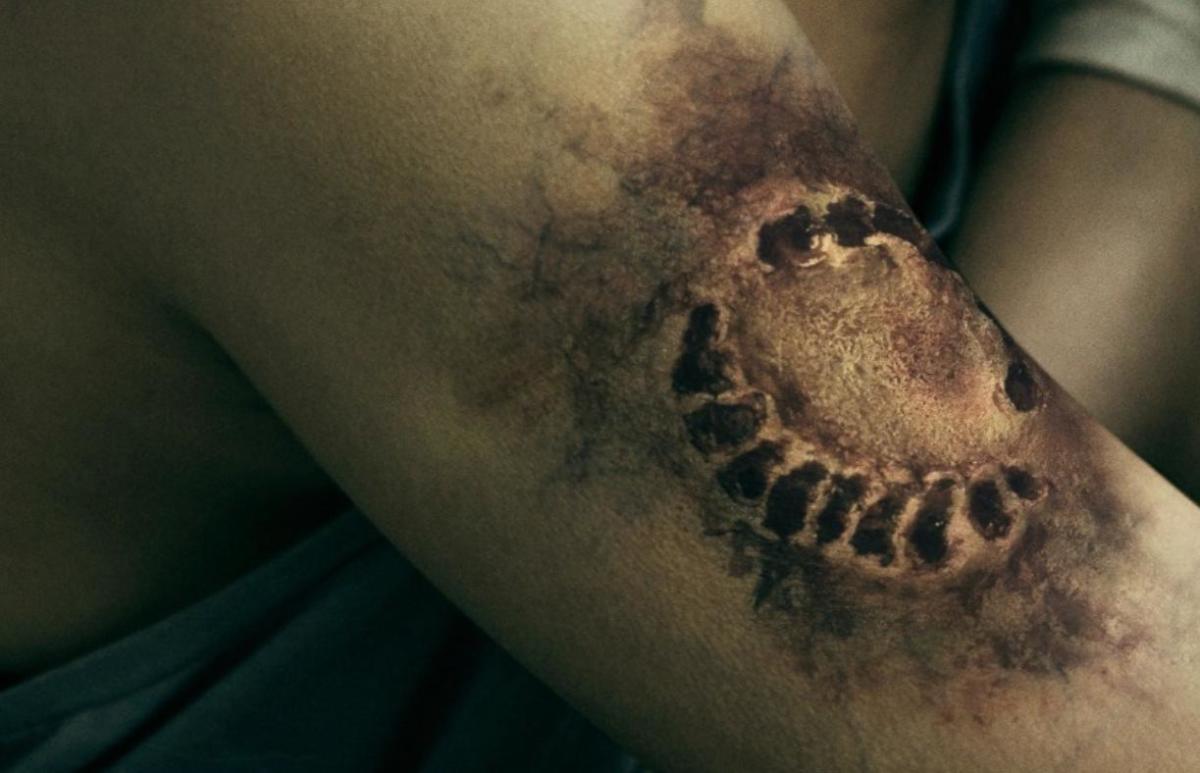 Written by Mark Young and Adam Frazier and directed by Young, Feral has a pretty damn basic setup — six college kids, most of them med students, go into the woods — well, you can see where this is going. High speed zombies with a “feral” virus rip them open in various bloody ways.

I wish I could tell you more about these students, but they’re not very memorable. They’re just a bunch of generic young white kids who decide to go on a camping trip, make a bunch of stupid mistakes along the way, and get eaten and / or disemboweled. Nothing we haven’t seen before, and it’s certainly been done a lot better.

Oh, and in case you were wondering if these people being med students comes in handy later, the answer is, yup, you betcha. As far as I could tell, there are absolutely no character traits that aren’t referred to later in the film. Nothing in the script flows naturally. Young and Frazier clearly thought a lot about plotting, but along the way forgot to build characters.

Probably the most notable actor involved  is Scout Taylor-Compton, best known for playing Laurie Strode in the Rob Zombie Halloween remakes. She’s not quite as forgettable here, but her performance is certainly less interesting than the film needs it to be. Most of the acting is serviceable, but I ain’t lying when I say I sometimes had a hard time telling these buggers apart. If they weren’t jerks, they were boring. I’m not sure there was much that good acting could have done to improve on this script.

Not only aren’t these characters engaging, but there’s also a lot of weird stuff going on with them. For instance, they don’t seem too concerned when one of their friends dies. When they find one of their friends with his guts ripped  out, yeah, they freak out at first, but nobody seems to have much trouble getting to sleep that night while his body begins the decomposition process somewhere out there in the woods. Maybe he wasn’t a popular guy. Who knows. And what’s with the disturbing amount of casual conversation (to reveal backstory and pad the runtime, of course) while their pals are dropping like flies around them? I think these people might be sociopaths. I mean, just a quick screenwriting tip: if your character is good with guns, you don’t need them to give a five minute monologue to explain why. Just have her shoot one of those feral buggers straight through the chest and have someone go, “Where’d you learn that?” Give us a couple lines in reply and then move on. Well, but that doesn’t pad the runtime, so….

Oh god, and they use one of the silliest horror cliches a couple times: the creature that’s super fast and kills with lightning intensity but suddenly slows down and stalks its prey when it comes time to make things a bit more scary. Well, so it goes. In all honesty, the creatures were the best part of the movie. I think this film could have succeeded if it consisted of wall to wall violence. Kill 37 generic white people in a row and then the monsters win and all is right with the world.

At the end of the film, we finally get a genuinely moving emotional scene. It’s too bad it came so late, because if Feral had concentrated on this kind of emotion instead of its mechanical plotting, we could have had a great film here. Well, too bad, I suppose. Writers, character is so much more important than plot. Invent some great characters and come up with a neat concept, and the plot will flow naturally.

The only special feature on this Blu-ray is a trailer, which is probably more than most people will want anyway.