Welcome to a rich fantasy world! Here’s some jokes about drugs, the nineties, and poorly made cartoons. 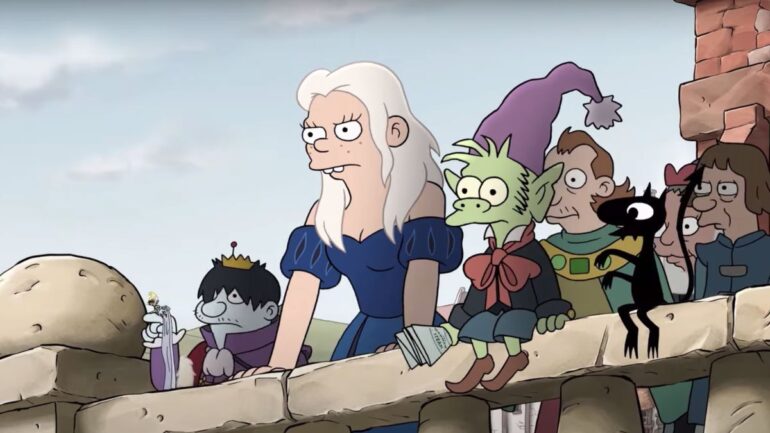 Matt Groening’s major works could be viewed as a natural trilogy in terms of their timeframes. The Simpsons was set in the then-present, Futurama was obviously the future, and Disenchantment is the past. Yet this doesn’t hold up. Futurama was a turn-of-the-millennium vision of the future, replete with noughties-era cultural references, and Disenchantment, with its trolls and talking animals, resembles no period of Earth history.

Instead, they are all comedy takes on some kind of established genre or milieu. The Simpsons was the family sitcom, Futurama was sci-fi, and Disenchantment is fantasy – although even that word is perhaps too coherent to describe the finished product. While it’s not a genre in the same way, the best word for it, as befits a work primarily set in ‘Dreamland’, is ‘dream’. And like a dream it is a slightly hallucinatory experience, where one moment need not follow on from the last particularly well.

There actually is a dream sequence in this season of Disenchantment, and unusually, when the revelation that it is a dream sequence comes, it’s actually the best bit – it immediately explains the increasingly implausible flights of fantasy it’s gone through. Even the immediate suggestion that hey, maybe it wasn’t a dream sequence doesn’t undercut it too badly. It leaves it carefully ambiguous, and again, nothing is really certain.

But most of the time it’s not a dream sequence, it merely feels like one. And then this happens, and then they show up, and then someone turns into an Alsatian. It begs the viewer to wonder what could possibly happen next, but with every new plot corner it goes careening around, it wears away the idea that any of it might actually matter.

This dreamy state goes some way to explaining the kind of dialogue – or strictly speaking, the lack thereof – a lot of characters get. A few times too often, they will spend long periods preoccupied with their own little fantasies, yammering on entirely to themselves and as such not engaging with the rest of the world. Most painful of these is when John DiMaggio’s King Zog goes mad and spends the vast majority of his time onscreen making stupid noises.

DiMaggio, better known as Futurama’s lovable rascal Bender and Adventure Time’s elasticated family man Jake the Dog, can do far more than honk into the microphone. And he’s strike one on a long, long list of cast members who are better than the material they’ve been given. Richard Ayoade, appearing here not long after another, better voiceover role in The Mandalorian, at least gets a bit of a plot, although they’re waiting for next year to actually develop it in any way.

Credit where credit is due, Disenchantment has tightened up the flab slightly on the production level. There is more of a sense, now, that this is an ongoing story, although if it had all been mapped out in advance you’d expect it to be a little tidier. And while you will never truly fix the sound issues in a show where people from either side of the Atlantic act at each other down the phone, the timing has gone from ‘woeful’ to ‘halfway acceptable’. Shots no longer tend to drag aimlessly on after people finish delivering a joke, as they did in previous years.

This leaves us a free hand to concentrate on the jokes themselves. Here we are already one up on the writers, who were certainly not concentrating on this area, taking lazy and obvious approaches throughout. To seize on a good joke and then run it into the ground over the next few minutes is rarely a good thing, but at least is understandable. When this is done with a bad joke, it’s daring you not to lose interest.

At one point there’s a pun that plays on ‘Don’t Ask, Don’t Tell’, a US army policy from 1993 – that is, twenty-eight years ago, at about the time The Simpsons was still good. And unlike The Simpsons’ use of obscure cultural references, it is a joke which cannot stand alone, it relies purely on the viewer recognising the phrase. Now, Netflix gives Disenchantment a 12 age rating. The twelve-year-olds in the audience, if any, will need to go away and look up why this is meant to be funny. And given the farcical nature of Don’t Ask, Don’t Tell, they will probably then write a better joke about it.

The show can make more contemporary cultural references, but when you see them you may prefer the dated stuff. A man spies on people through a hidden camera implanted in a crown, a desperately convoluted setup that appears to be working backwards from the punchline (such as it is) “The Crown is my favourite show.” Less a joke and more an advert for another fine Netflix product – and clearly another one for the twelve-year-olds, who are all big fans of sober biopics about the British royal family.

Most episodes have at least one marshy, no-man’s-land patch of jokelessness. Often this will be excused as a serious action sequence, something which itself cannot work here. There can be no real peril, no real stakes, in a show which, as it never ceases to remind us, has already brought characters back from the dead more than once.

It doesn’t stop them trying, though. Much of this season’s time in the neighbouring genre-country of Steamland – a creation which made me mentally check out last year, noting that the show had become ‘sick of its own swords-and-sorcery backdrop’ – has the protagonists being chased by robots. But then there’s a sequence when they have to clear up a dangling plot thread from the previous episode, and the robots temporarily vanish.

Again, this is straight-out dream logic. Things appear or disappear based on whether you’re currently looking at them, and you find yourself backtracking trying to hazily make sense of some loose end. But while these might be acceptable narrative choices in the depths of the subconscious after a night on strong cheese, it’s less so in a flagship Netflix production.

If at any point Disenchantment seemed aware of its detachment from its own reality (other, of course, than when it’s ending an episode with ‘and it was all a dream’), this might be a plus point, rather than a minus. Indeed, at times it does show unlikely flashes of self-awareness. At one point Elfo wanders away and criticises the idea of scenes which distract from the main plot in a scene which does exactly that, and later mentions a cartoon having bad sound design (which has been a major criticism of Disenchantment from the start).

But as one of Netflix’s other big animation projects, the far superior BoJack Horseman, illustrated over and over again, simply being aware of one’s flaws isn’t enough. At its worst, it becomes an excuse simply to wallow in one’s own failings. When a comedy’s most pointed jokes are directed at its own weaker material, that seems like a reasonable summary. 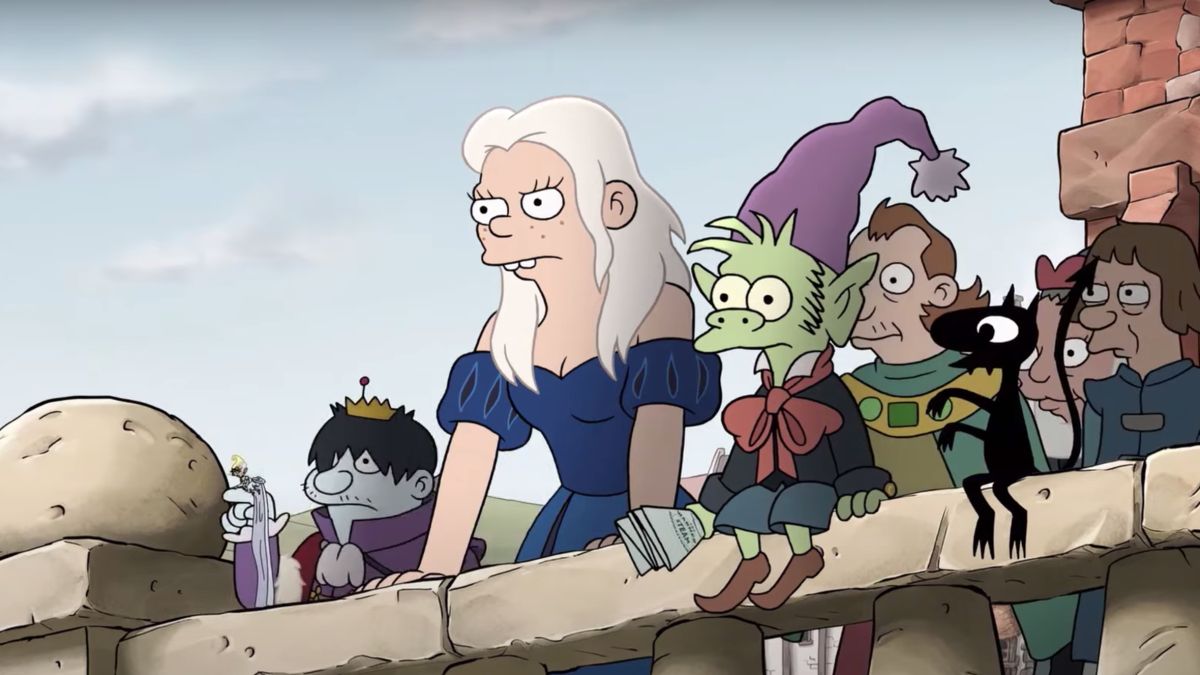 Verdict
Cleaning up around the edges cannot do much to improve on a severely flawed centre.
3
Cultured Vultures is a pop culture website established in 2013 covering all things gaming, movies, and more. We eat your words.
All The News On The Biggest Games