The Beguiled (2017) REVIEW – A Suspenseful and Haunting Drama-Thriller 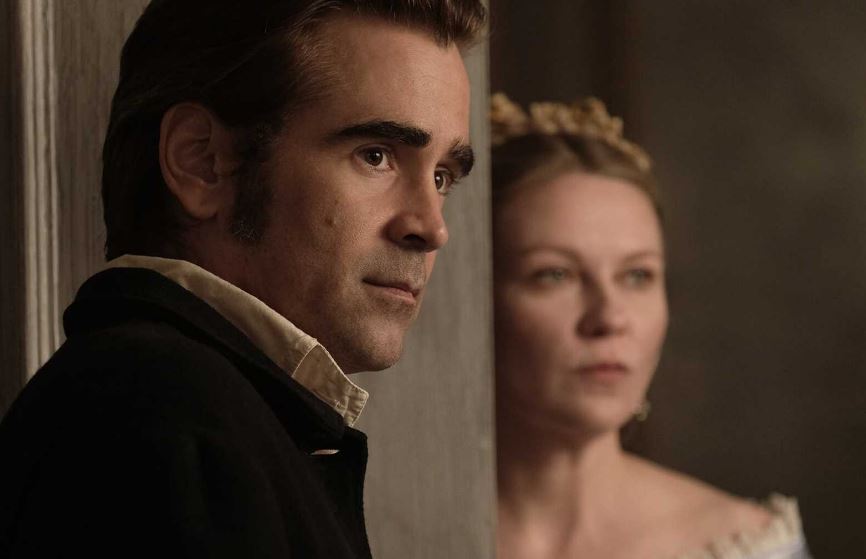 Sofia Coppola’s newest film, The Beguiled, is a remake of the 1971 film of the same name, which itself was adapted from Thomas P. Cullinan’s novel. The film has been criticized for whitewashing the original novel, which Coppola responded to earlier this week. On the surface, The Beguiled is the mostly quiet story of a near-abandoned girls’ school in Virginia whose inhabitants take in a wounded Union soldier during the last months of the Civil War. However, the film’s deeper themes and cutting execution make this more than a typical period piece.

The acting in The Beguiled is solid, especially from Nicole Kidman and Colin Farrell, who give standout performances. Kidman plays the school’s headmistress Miss Martha Farnsworth, a strong but reserved woman whose words are very direct one minute and dripping with subtext the next. Farrell plays wounded Union Army Corporal John McBurney, the mysterious enemy who is simultaneously disarming and suspicious. Kirsten Dunst plays Miss Edwina Morrow, a second teacher who feels burdened by the tedious isolation of life at the school. Angourie Rice delivers a promising performance as Amy, the young student who finds McBurney. Also memorable is Elle Fanning, whose turn as the flirtatious older student Alicia marks her second appearance in a period piece this year, following Ben Affleck’s gangster drama Live by Night. Oona Laurence, Emma Howard, and Addison Riecke round out the cast nicely as the other remaining students.

Coppola’s screenplay is slow moving and restricted. Much is revealed in what the characters don’t say, or how they say what little they allow themselves to share. The chemistry among the actors, especially between Kidman and Farrell, brings this creative risk to life in a brilliant way, and the film’s reliance on subtext makes the plot feel all the more mysterious and engaging. 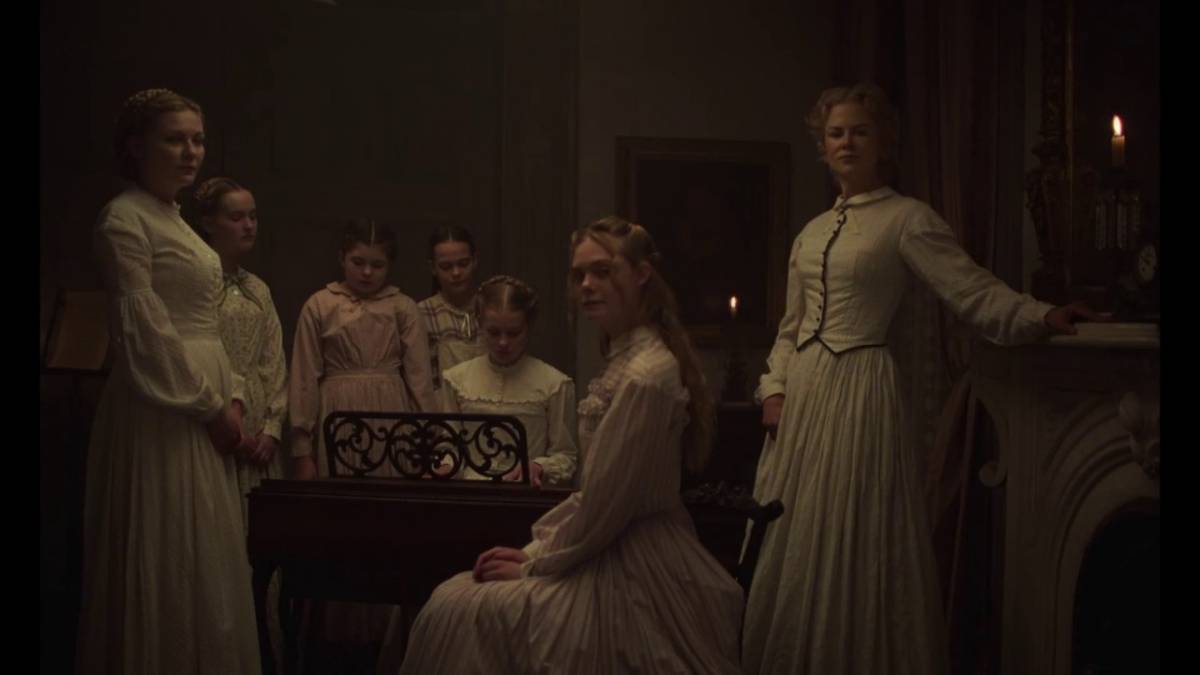 The Beguiled is a quiet movie – in fact, Laura Karpman’s score doesn’t even appear until about an hour into the film’s hour and a half runtime. The slow-paced plot is expressed via long-held and mostly static shots, and intercut with lingering images of Spanish moss and the unexciting, repressed lives of the school’s inhabitants. The cinematography is breathtaking. Coppola and director of photography Philippe Le Sourd make exceptional use of natural light outdoors and practical lighting indoors, as well as a muted, almost rosy color palette, and masterfully arranged group shots reminiscent of Kubrick’s work in Barry Lyndon.

The film’s outdoor scenes were shot on location at a Louisiana plantation house, and indoor scenes were shot in a small antique home. This is a difference you can feel. Outside, the bare road stretches out in both directions, and nature fills the world that the women see out their window. Inside, everything feels tight and bunched together, at times claustrophobic. This heightens the feeling of isolation that we and the characters feel from the rest of the changing world.

These elements infuse the film with an intimacy and palpable tension that allow us to experience the story through the eyes of its women, living in an isolated world that has now been tainted by the charming but possibly dangerous intrusion of a mysterious stranger. It is from this point of view that the movie asserts its main themes and sets itself apart from its predecessor as a film about women. Indeed, Coppola’s adaptation is more about southern women’s changing roles and their varied reactions to these changes than it is about a wounded Union soldier stuck in the South.

That is where the film evolves. All is not what it appears to be. The secluded women’s modest lives are actually sexually repressed ones. Their courtly interactions with the soldier are bursting with tension, heightened by irony, double meanings, and stares held too long by both parties. The group of women, which appears cohesive at the beginning of the film, fractures more and more with each interaction as the soldier heals and makes apparently special connections with more than one of them. Of course, McBurney is not what he appears, either, which is touched upon twice – first as a concession by Miss Martha that the enemy as an individual is not what they expected, and second in the film’s final act, when the soldier shows his true nature. The tone of the story, at first quietly tense, becomes explosive at the climax.

But the biggest surprise has to do with the nature of the film itself. What appears at first to be a simple story about the effect of an intriguing visitor turns out not to be about the visitor at all. Instead, it’s the story of a woman who clings so dearly to the life she led before the war that the house she runs is an indulgence in fantasy. It’s the story of the women who live under her thumb, who accept her view of the world to varying degrees. The film’s rosy glow and still, painting-like cinematography aren’t intended to idealize antebellum life, as we’ve seen time and time again in films like Gone with the Wind. They instead serve to show the world as Miss Martha sees it: proper, warm, and controlled.

Scenes with McBurney’s character, especially during flirtatious interactions, his time spent working on the school’s garden, and the film’s climax, include freer movements and wider angles. McBurney’s presence is almost enough to disrupt Miss Martha’s stubborn attachment to the past, but not quite, and the shift of control from McBurney back to Miss Martha in the film’s final scenes is illustrated in Coppola’s return to close, tightly choreographed shots.

The Beguiled is a suspenseful and haunting drama-thriller that repurposes an old story with new themes and a reoriented focus on its female characters. Coppola keeps the viewer on their toes for the duration of the film and makes excellent use of all the tools in her filmmaker’s belt.

Verdict
The Beguiled features great acting and masterful cinematography, and delivers as an immersive, meaningful thriller.
7.5
Cultured Vultures is a pop culture website established in 2013 covering all things gaming, movies, and more. We eat your words.
All The News On The Biggest Games