Apex Legends: Ranking The Legends From Best To Worst 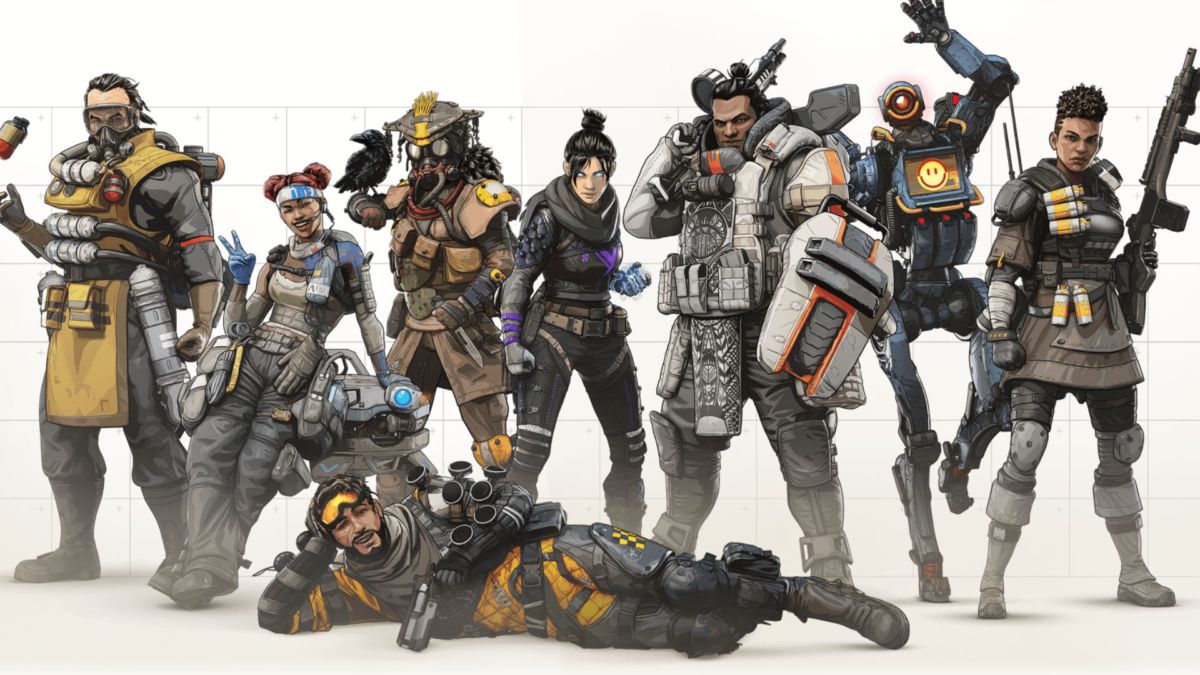 Season 3 of Apex Legends is now live, bringing with it a new character, mapConsidering where the game was when Octane was first available, Apex Legends has improved so much.

Anyway, with eleven legends to choose from, it can be a bit difficult to know where to start, or to know which characters are most valuable in a team composition. With that in mind, we’ve put together a little tier list to showcase which characters are more viable when working as a team, which abilities are more useful in team fights, which Legends are easier to learn and more. 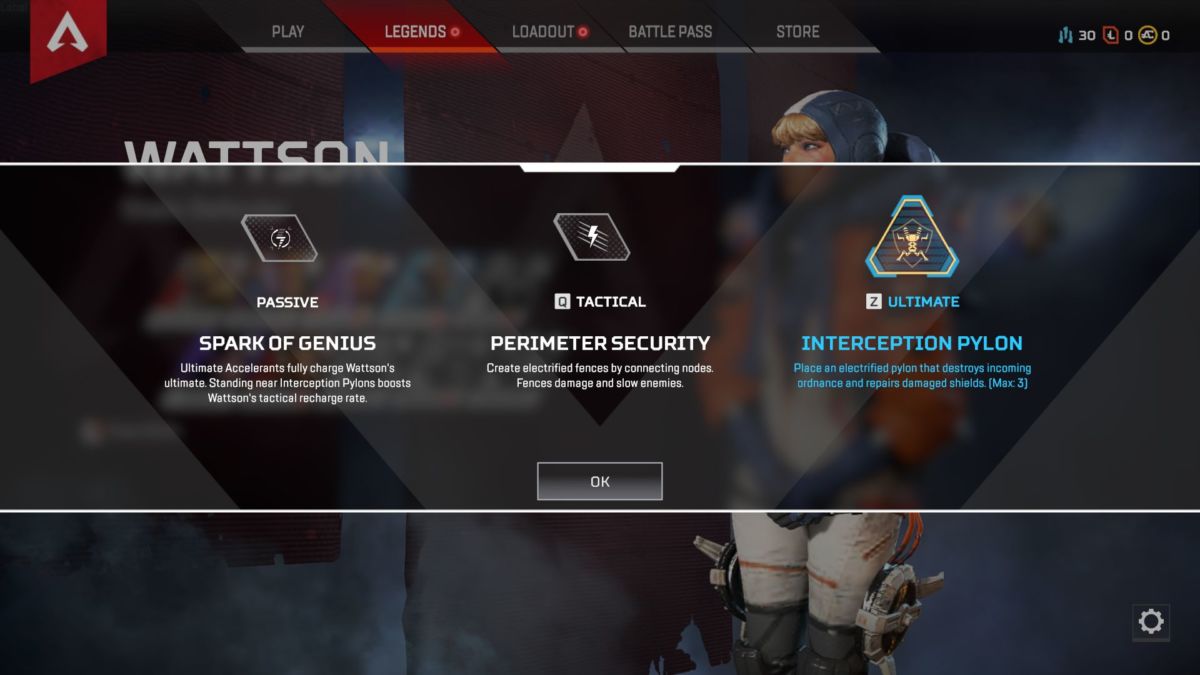 Unfortunately, one character has to be considered the weakest of the bunch, and right now, it’s Wattson. She’s still pretty useful in certain situations, though those situations are either holing up inside a building as the circle encroaches, or using her Perimeter Security tactical ability to block narrow pathways outside the circle.

Her tactical ability allows Wattson to dictate the flow of battle, funnelling opponents towards certain entry points for proper ambushes. Her ultimate, the Interception Pylon, takes care of incoming ordnance and recharges shields. Unfortunately, its permanent placement makes it only useful if you’re deciding to take up permanent residence indoors. 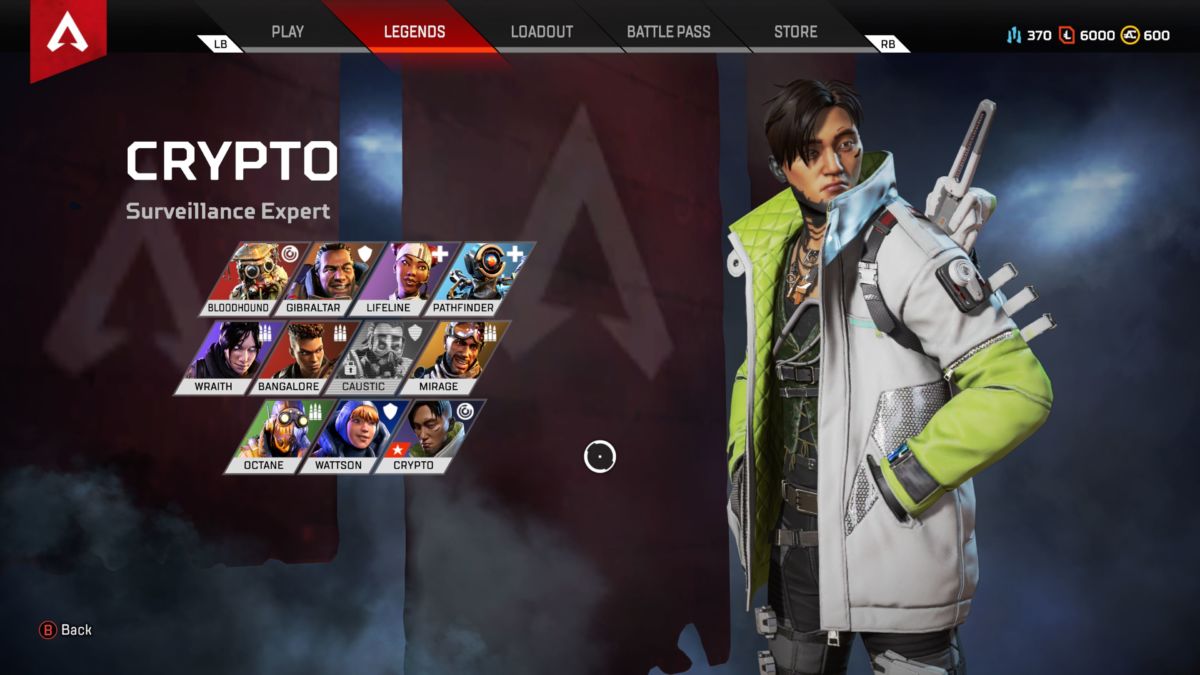 Apex Legends’ most recent addition, Crypto has the potential to be a game-changing addition to the roster, with his surveillance drone able to watch over the battlefield, spotting enemy squads over the landscape. It’s a useful ability to have, particularly during the final stages of a game when squads start to favour a camping strategy.

Unfortunately, his abilities are completely tied to the drone, meaning that his usefulness in combat is diminished. Also, while using the drone, Crypto is unable to move, making him vulnerable to attacks. In a game where you can be ambushed from all angles at any times, being vulnerable in this way can be a death sentence. His ultimate, an EMP strike from his drone that slows enemies and deals 50 damage to shields, is a great way to start a fight, but Crypto offers nothing to help you finish it. 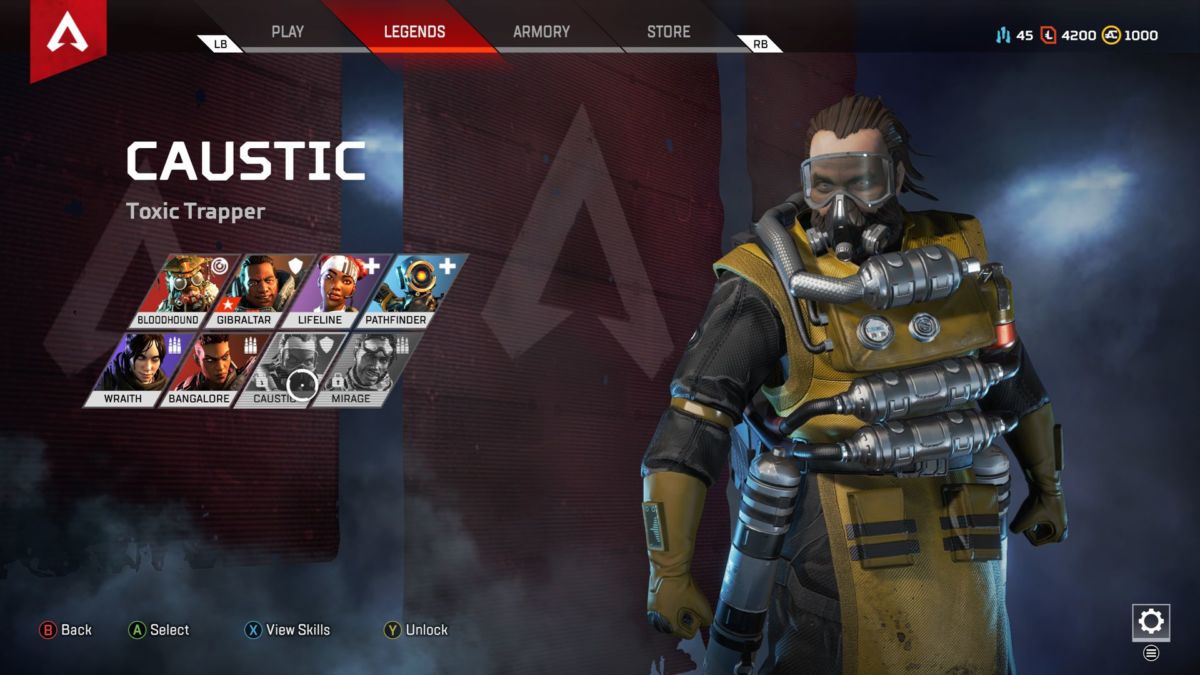 Caustic was almost going to be the bottom tier pick, because he is just as uniquely situational as Wattson, but his abilities can be used much more efficiently in team fights to turn an engagement around. A few toxic barrels strewn across the battlefield can often make more of a difference than a Wattson taking time out of a fight to strategically place electric fences.

The fact that Caustic’s barrels can be used to block doors makes him an incredible troll pick, though the level of luck and effort required to pull off a trick like that makes you wonder if it was worth it. That said, in the late game Caustic has the potential to come into his own. With toxic gas revealing rival players, Caustic offers great area deniability and team visibility. Despite all that, a good Caustic player seems to be a unicorn. 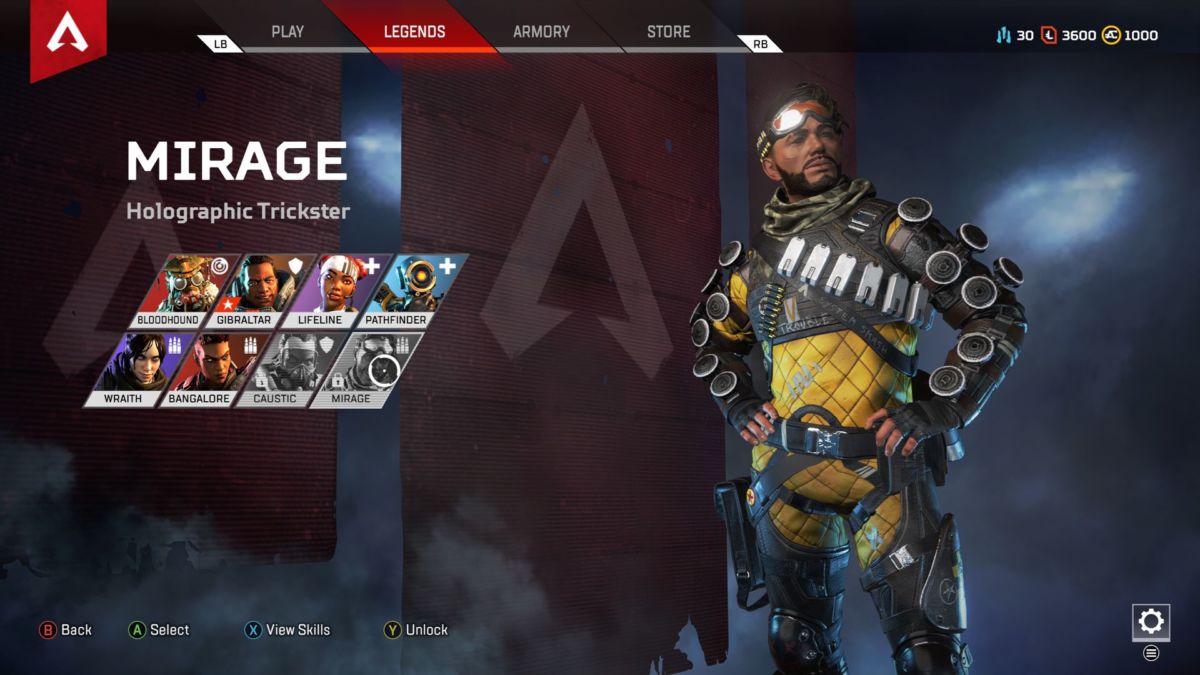 The pick of a high level player looking to flex on lower level opponents, a skilled Mirage can be deadly. His emphasis on deceit can be incredibly useful at confusing opponents or revealing camped enemies, but he’s not as game changing in team fights as other Legends available right now.

His decoys and cloaking ultimate gives Mirage a great level of survivability, allowing him to swoop in and grab fallen banners should the need arise, and his passive that activates a decoy when he goes down is handy if there’s a friendly Lifeline around the corner. However, veteran players probably won’t fall for those deceptive tricks, which can leave Mirage without any useful tools. 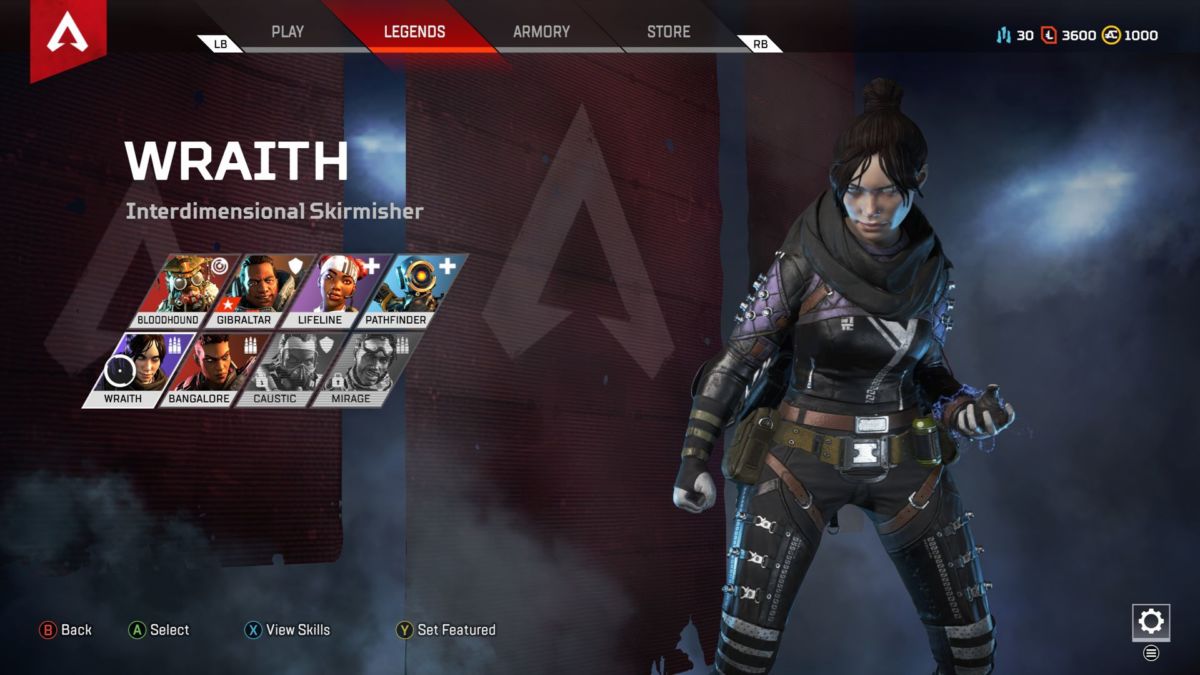 Apex’s resident edgelord, Wraith is for the player that’s begging and screaming for a solo mode. Her passive ability gives her an enhanced threat awareness, which is always handy, and her warp abilities give her a mobility advantage in fights. A good Wraith can be hard to keep up with, and her abilities are fairly easy to get to grips with, making her a good beginner pick.

The fact that Wraith’s Dimensional Rift ultimate can teleport teammates makes it viable for both offense and defense, as players can either sneak in or out of engagements and catch enemies by surprise. Paired with a character like Bangalore, Wraith can do some serious damage. 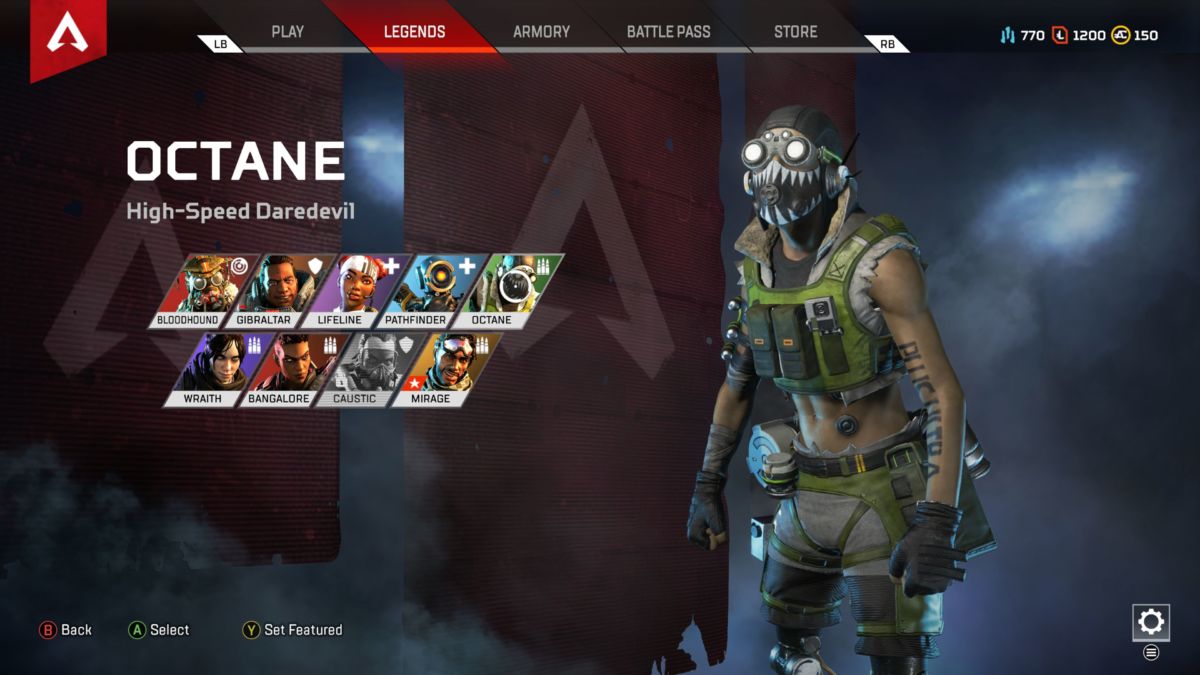 Another one that’s aimed more for the solo players than a dedicated team composition, Octane has all the tools necessary for any aggressive player, offering a mix of speed, unpredictability and survivability. In a lot of ways, Octane can be used similarly to Wraith, but there a few reasons why Octane is a much more favourable pick.

His Stim Pack tactical ability, which increases his overall speed, allowing Octane to get in and out of fights quickly, at the cost of his own health, while his Swift Mend passive also means that he’s ready for the next fight. The real ace in the hole for Octane is his Jump Pad Ultimate, which is mainly used to push towards other squads. Pushing via the pad allows for much more unpredictable strategies than other aggressive characters, and pairing it with a Bangalore can make things really interesting. 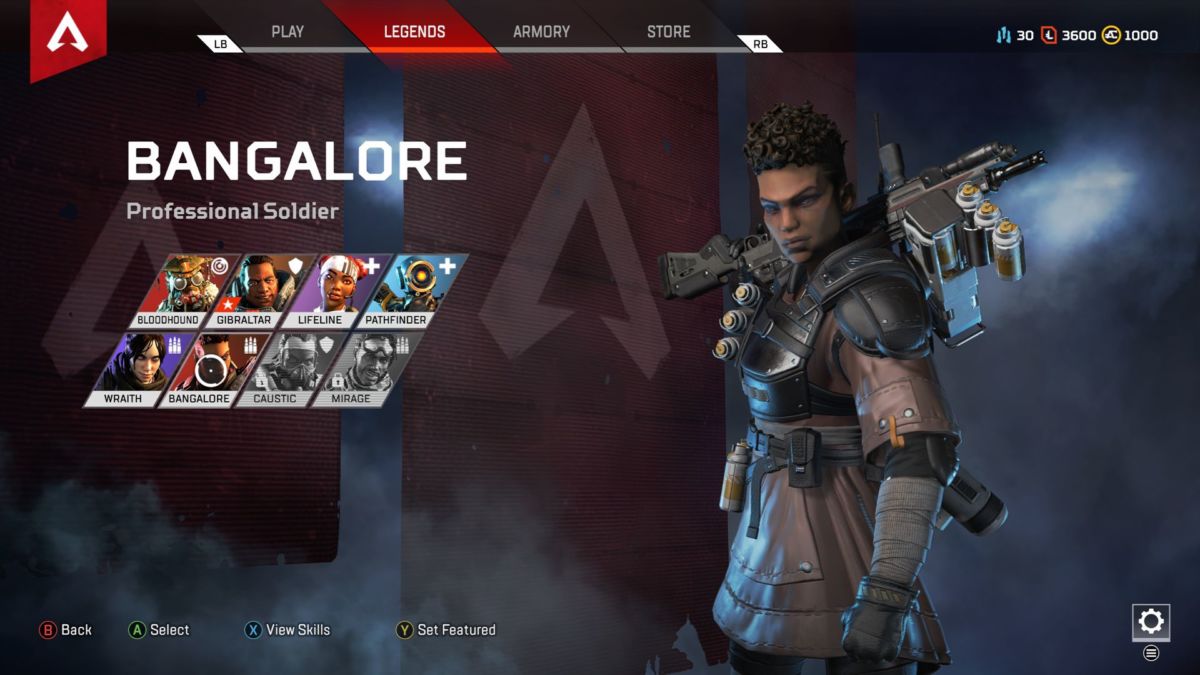 Bangalore is perhaps the queen of turnarounds. Her passive ability allows her to escape a hectic team fight with a faster sprint, while her tactical ability provides the smokescreen to cover it. Once her enemies have pushed forward enough, she can call in her airstrike to decimate her foes.

Her airstrike offers great area deniability, making it incredibly useful in late game, and the smoke screen is a fantastic way to mask a push/retreat, meaning that she works best paired with a stealth focused Legend like Wraith. Bloodhound also works, as they can reveal enemies through the cover of smoke. A good combo like that backed by skilled players is practically unstoppable, but Bangalore has great versatility and pairs well with pretty much every character. 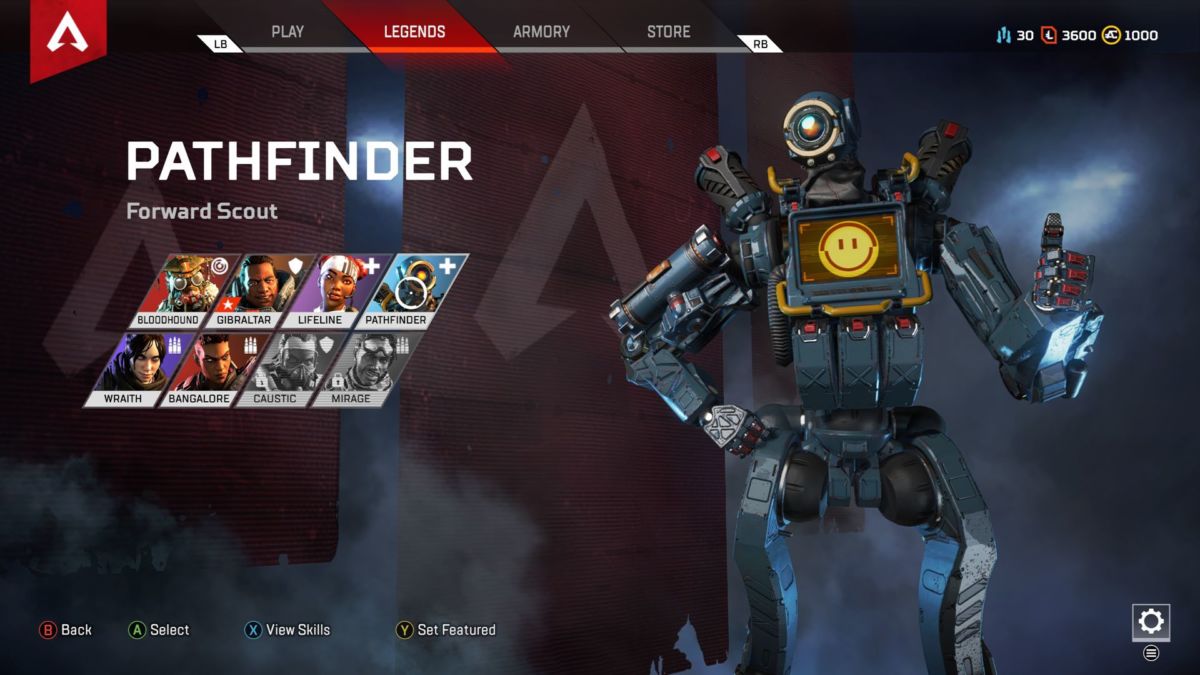 Okay, we might have underestimated Pathfinder originally, and by we, I mean me. Pathfinder has consistently been one of the most popular characters in Apex Legends, with the higher ranks of players swearing by his mobility. Unfortunately, himself, Wraith and Lifeline have all took a nerf that increases incoming damage by 5%, but Pathfinder’s popularity will likely still endure.

Changes to the UI have improved the grappling hook, as it tells you when the hook is within range, making it a much easier experience for new players, but there’s still a bit of a skill barrier regarding its usage. With practice, you’ll be able to use it to pull off some insane flanks and kills. His beacon scan passive that tells you where the ring will be located has become more useful as Respawn have quickened the circle closing speed and damage, while the cooldown of his ultimate means the whole team can often get involved with Pathfinder’s verticality. 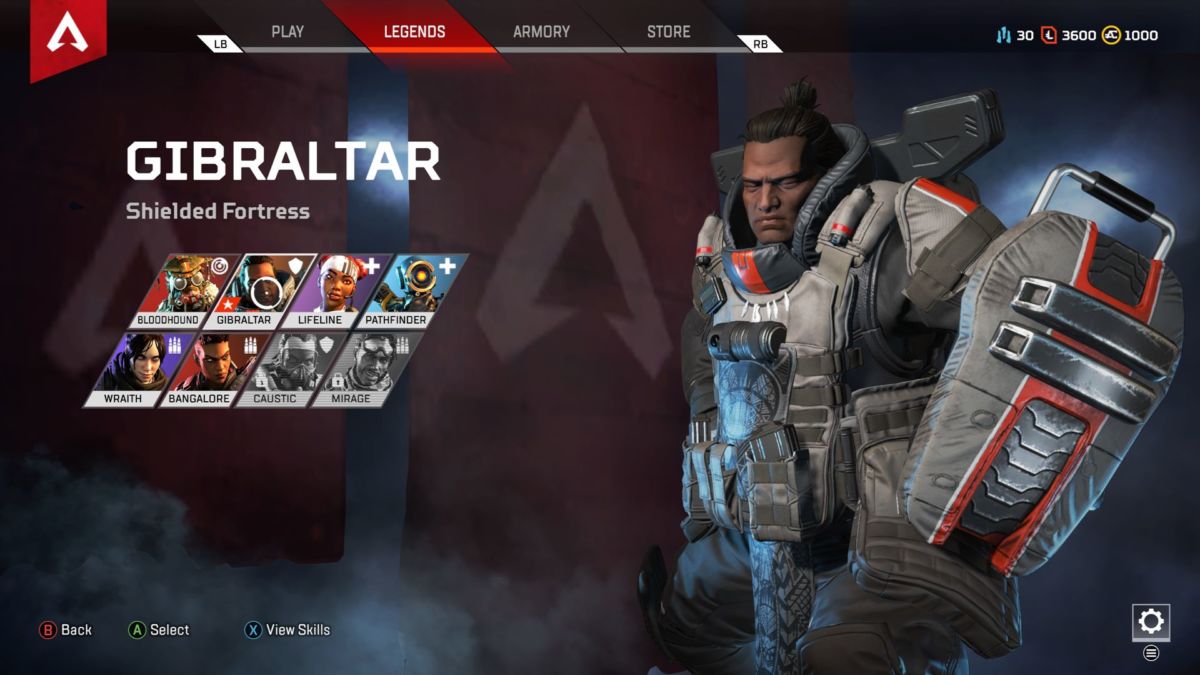 As far as defensive heroes go, Gibraltar is everything you could ever want. An impenetrable dome shield, his own personal shield and the ability to call in airstrikes makes this big lad an awesome pick, regardless of the team composition. Everyone likes being protected from incoming fire, right? Gibraltar is the man for the job.

Gibraltar’s mortar ability is similar to Bangalore’s, except more immediate and concentrated, making it excellent for gaining the upper hand in close range team fights. If in doubt, throw it out. Don’t worry, it won’t damage your teammates. His shield is incredibly effective too, especially when dealing with snipers in areas with no cover or an incoming airstrike, granting you a brief respite amongst the chaos. 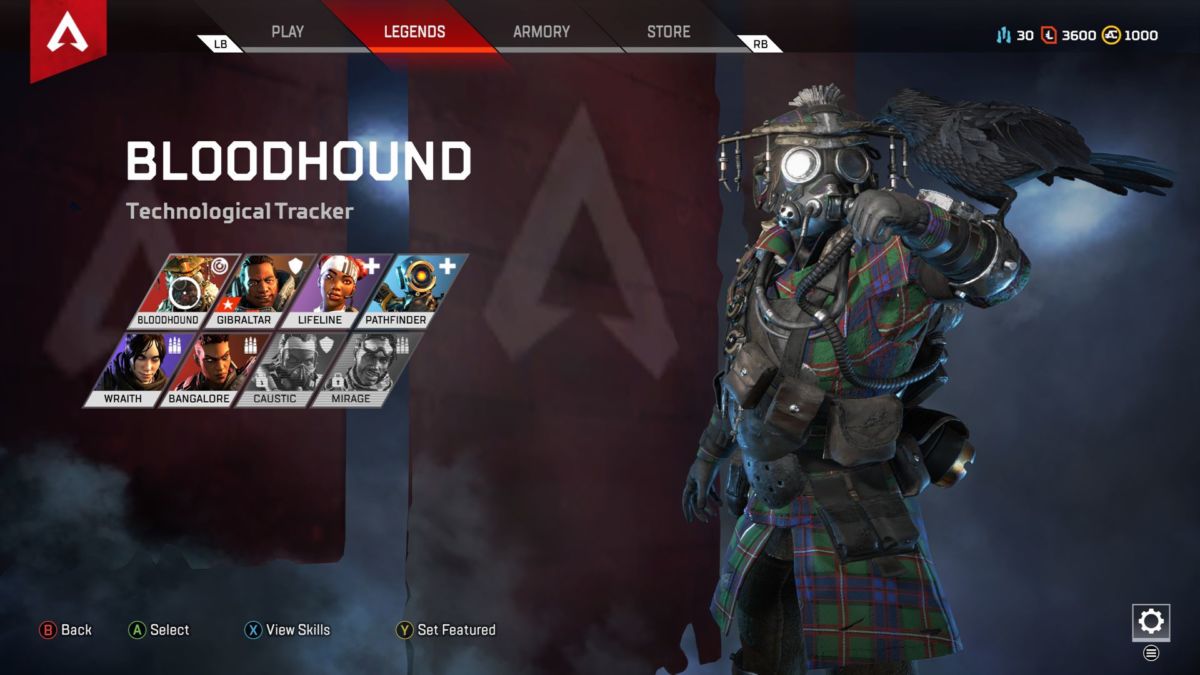 Possibly the best pick for solo players looking to add to their kill count, Bloodhound is billed as the ultimate tracker and it shows. Their passive tracking abilities give them clues about enemy squads that might have passed through the area, allowing your squad to get the jump on them, while their ultimate enhances those abilities and grants Bloodhound an incredible speed boost.

Their tactical ability of scanning the immediate area is incredibly effective in urban drop zones, or during Bangalore’s smoke screen, which gives your squad the edge in fights. While a solo Bloodhound could use those their abilities to great success, a communicative Bloodhound working with a full squad is the stuff of legends. 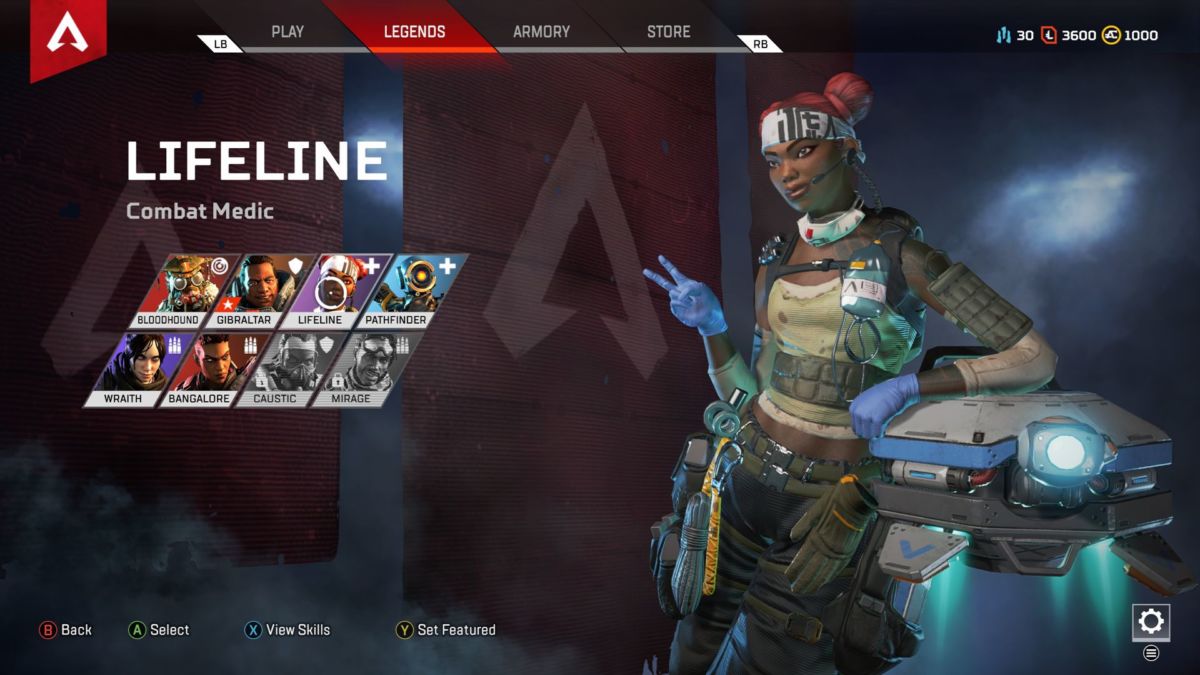 It had to be Lifeline. The healer is always top-tier, always. Lifeline is practically essential in any team composition due to her brilliant abilities, as her passive, healing drone and care package are possibly the most useful abilities the game has to offer, and the ease of her abilities means that anyone could become a good Lifeline player.

Being able to revive players faster, along with putting up a shield when she’s reviving someone, is invaluable throughout the game, and her healing drone can be used to ensure the downed player gets some health back once they get to their feet. As for her Ultimate, the care package is almost broken in its usefulness. Being able to call down high tier defensive items will make you the most popular player in the squad. Just remember to down those Ultimate Accelerants.