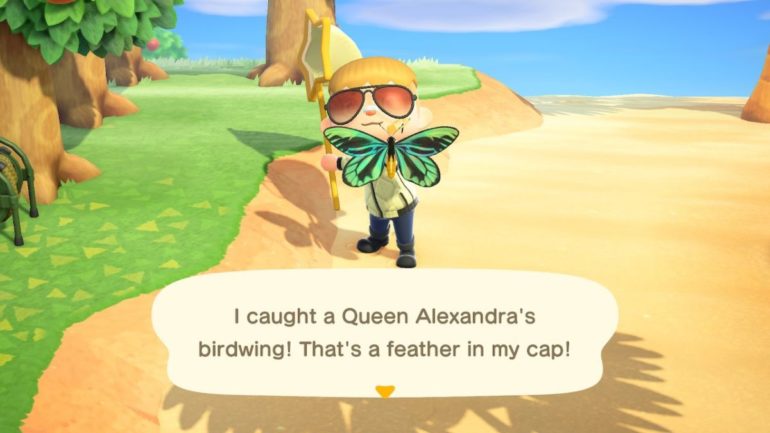 At the start of every month, Animal Crossing: New Horizons gets a little refresh, making the game feel almost new. New bugs and fish enter each month, while others also leave. From the start of May, you will have plenty of opportunities to catch the plenty big Queen Alexandra’s Birdwing.

Here’s all the info you need to catch Queen Alexandra’s Birdwing in Animal Crossing: New Horizons.

The Queen Alexandra’s Birdwing is available in New Horizons wherever there are any exotic flowers, such as hybrids. We recommend that you plant loads of different flower variations, which tends to attract rarer critters.

It’s absolutely massive as well, almost the same size as the Atlas Moth, so you may struggle to miss it.

You will, of course, need at least a flimsy net to catch a Queen Alexandra’s Birdwing. If you’re really struggling to catch one, don’t forget to just run in and out of the screen until one spawns.

Once you’ve caught a Queen Alexandra’s Birdwing in New Horizons, don’t forget to turn it into Blathers at the museum to add it to his collection.

When you catch your Queen Alexandra’s Birdwing, you can then sell it to Nook’s Cranny for 4000 Bells, making it one of the best butterflies to sell in the game.

You can also hold onto it until Flick arrives on your island, who will then buy it for 20% more than usual for a price of 4800 Bells. You can also give him three of them and he will give you a Queen Alexandra’s Birdwing model in return.

When Is Queen Alexandra’s Birdwing Available Until?

Animal Crossing: New Horizons, which is out now exclusively for Switch, is a really lovely paradise simulator. From our review: