Whisper Down The Lane: Paranoia and Pentagrams

It's all a Satanic Panic. 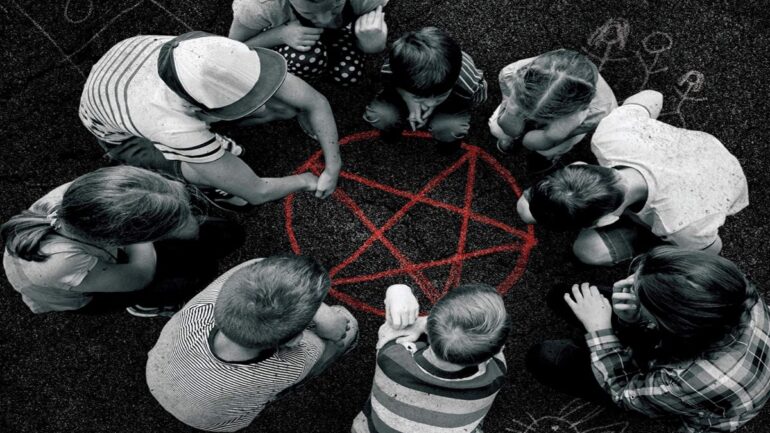 Whisper Down The Lane

Horror is a new genre for me, mostly because I am, unashamedly, a big chicken. But Clay McLeod Chapman’s Whisper Down The Lane sounded so intriguing that I just had to give it a go – and I am really very glad that I did. Part horror, part thriller, it feels as though it taps into the market of true crime too, without being a true crime novel.

The reason it feels so true crime-esque is that the story is inspired by something that really did happen; the McMartin preschool trials and, more widely, the 1980s US ‘Satanic Panic’. If you’ve never heard of either of these things, I’d encourage you to go and look them up before you read Whisper Down The Lane. You don’t need to know anything to jump into the novel, but I think it makes the experience that much richer if you have some background first.

The Satanic Panic was wild; a country-wide moral panic that essentially saw stories of Satanic ritual abuse flooding the national consciousness. Of 12,000 accusations in the US, absolutely none turned up any evidence for a well-organised systematically abusive Satanic cult, but that didn’t stop the outcry. The McMartin preschool trials were a well-known example of this wider problem; from 1983-1990, several members of staff a preschool in California were tried for involving children in systematic ritual abuse. All of the charges were dropped eventually, but not before it made an indelible mark on the zeitgeist.

Whisper Down The Lane explores this rich history with a dual narrative; one thread following Richard, a man who doesn’t seem to have a past, as he goes about his life as an elementary school art teacher, husband and stepfather. It’s only when his past seems to be replaying itself that he starts to worry someone has finally caught up with him. The other thread focuses on Sean, a six year old boy who lives with his mother, and who – unwittingly – kicks off a hysterical panic surrounding his kindergarten teacher and other staff at his school who are accused of ritual abuse.

Both of the threads are equally compelling to read, which is not always a guarantee for a duel narrative book. Sean is a sympathetic character. Of course he is. He’s only six years old, and we can see clear as day how he is being manipulated into saying what he does. Richard is more cynical and less easy to like, but I feel as though this is very much a deliberate choice on Chapman’s part. As we get to know him better, we can see that he is genuinely trying to be a good person – and especially a good stepfather to Elijah.

Whisper Down The Lane’s thriller elements are strong, tied in with the true crime narrative, but the horror hasn’t been neglected. Here it is, for the most part, internal. Prompted by very few external factors – a couple of well-placed, disturbing and not at all gratuitous animal deaths – the horror then all turns inwards for Richard, as his paranoia takes a hold of him and doesn’t let him go. It grips us too; on occasion, I had to take a breather from reading. There were times that I genuinely couldn’t figure out if Richard was just being paranoid or if his concerns were actually valid, which all added up to a page turning read.

But the true horror also comes from the uncomfortable truth that this happened in real life. The Satanic Panic ruined the lives of countless people, just as every moral panic in history has; from medieval witch trials to the AIDS pandemic of the 1980s and beyond, moral panics have only ever caused more harm to people who are often already vulnerable or marginalised. Chapman doesn’t shy away from that in Whisper Down The Lane; Richard’s fear of the people around him, friends and neighbours he thought he knew, is real and all-consuming. And, as Chapman points out, this fear is truly founded on something dangerous. There are people in authority who are doing harm here, but they aren’t the people accused of abuse; they’re the ones charged with dealing with it.

Whisper Down The Lane is a book for horror fans, thriller fans and true-crime fans – and I don’t think any one of those audiences would find it lacking.

READ NEXT: 5 Potential Killing Eve Spinoffs We’d Like To See