BOOK REVIEW: The Subtle Art of Not Giving a Fuck by Mark Manson 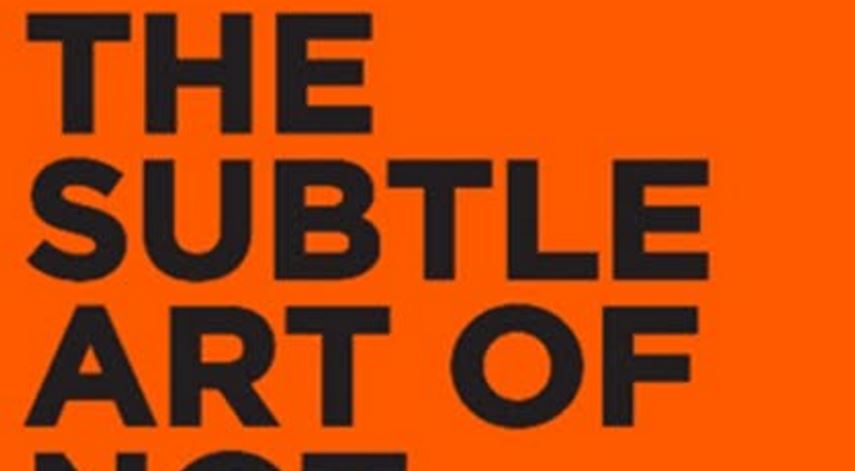 Probably not the ideal bedtime story for your kids, unless you want them effing and blinding at nursery school. But for adults, this book is pretty damn good. I think we all have that crisis-that’s-not-a-midlife-crisis-but-is-still-a-crisis at some point, and The Subtle Art of Not Giving a Fuck is a well-worded reminder that life is shit and we have to find the shit things that aren’t as totally shit as the other shit things so that the shitty parts of life aren’t as shitty as they could be. It makes more sense in the book, I promise.

I opened this book expecting a sarcastic, kind of satirical commentary on emotions, and how to come across as cool and collected in front of others, but The Subtle Art of Not Giving a Fuck is actually very clever, and very well thought out. It tackles the growing twenty-first century problem of rich people not feeling rich because of how rich everyone else is, of beautiful people not feeling beautiful because of how beautiful everyone else is, and so on. It talks about the discourses surrounding social media and our peers’ enduring presence in our lives, in the form of Facebook profiles and Snapchat stories.

I would argue that it isn’t until someone points it out that we realise how intruding and exposing social media can be; the game of liking posts and photos can be bitchy, deliberately isolating and a breeding ground for misunderstandings. The Subtle Art of Not Giving a Fuck is a funny mix of “I mean, no-one really knows what is the right thing but I’m going to help you figure it out” and “fuck it, let’s just be miserable when we want to be”. Either way, I’m in.

The author, Mark Manson, has made his name doing entrepreneurial self-help writing bits and bobs, and probably doing quite a bit of thinking. His first book, Models: Attract Women Through Honesty, is everything Paddy McGuinness is not: it uses emotional reasoning rather than a daft game show to help people understand how to attract a good partner.

His second book runs along the same lines but with a totally different aim – it’s there to help people figure themselves and their lives out without too much hardcore counselling or therapy. The art of not giving a fuck, as I understood from the book, takes some self-realisation and acceptance, which it would seem isn’t a piece of cake. There’s quite a lot of thinking to be done, so I’d set aside some time to reflect on what you’ve read. It may not be the most eloquent or prosaic of styles, but it gets the point across, and let’s be honest: no-one wants to read about how to handle life in some cryptic Shakespearean register.

But, as I’ve touched on already, the amount of swearing and sheer brutal honesty makes this book not made for the faint-hearted. As trivial as its title makes it seem, it’s the kind of book you need to sit down with for a few hours and properly think through – it’s what the kids might call ‘a bit too real’. However, it is funny, and relatable, and cool. And I like it.

Buy The Subtle Art of Not Giving a F*ck: A Counterintuitive Approach to Living a Good Life