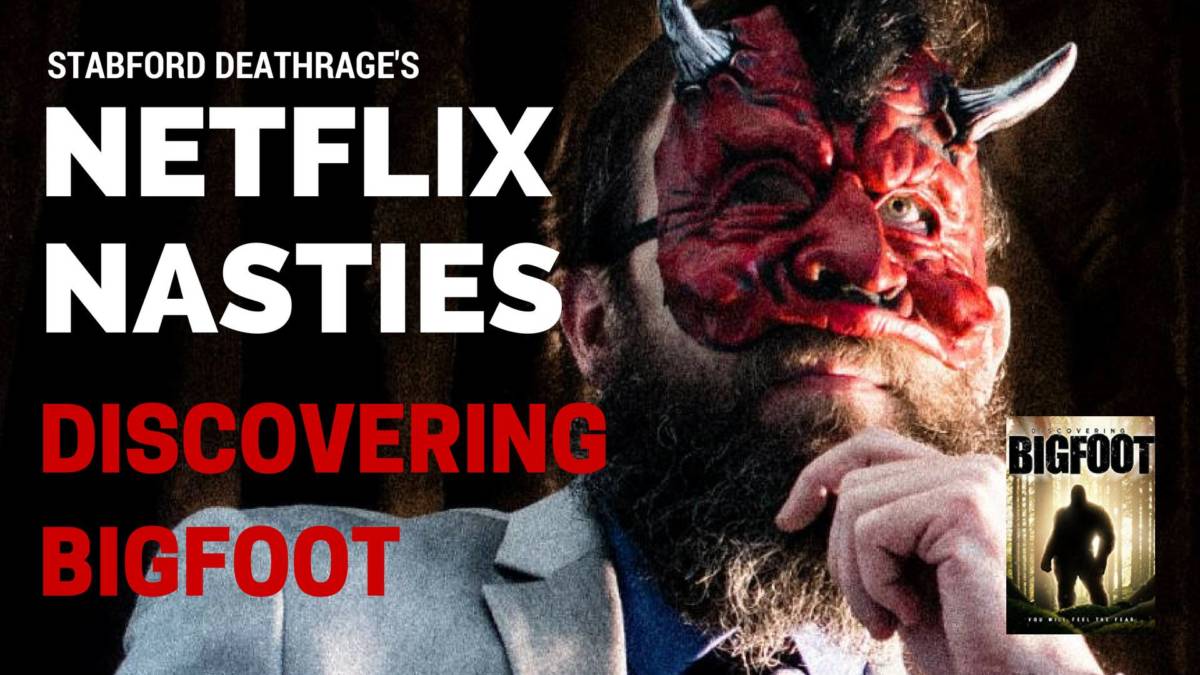 Years and years ago, back when people still went to the video store to rent movies, I was strolling through my neighborhood with a bunch of wacky rentals when I encountered my neighbor, who just happens to be my arch-nemesis. He noticed my stack of films, and inquired about them because he seemed to be compelled to pathologically thrust his nose into all of my business. I said, ‘I rented a bunch of bad movies, and I’m going to eat quarts of Chinese food and piles of candy and enjoy the hell out of my life.’

He then said, ‘Bad movies, huh? What’s the appeal?’

This is why we’re enemies.

Even though my neighbor is a bore and a square, I regret to say I see his point. Just as he misses the sweet satisfaction of terrible cinema, I am completely at a loss as to the appeal of the woods.

Why anyone would foolishly venture out of the delivery range of their favorite Chinese restaurant, miles from wi-fi, and pitch a tent among bugs and rattlesnakes and sit amongst trees in the dark confounds me. What the heck is even out there? Doodly-squat is what, and if you have to make a doodle, you’ll have to squat, probably behind a shrub, or maybe a boulder.

No, thanks. Sure, sometimes people need to crap outside, which is why the subway was created. In the subway, you’ve got a 90% chance the crap you’re stepping over is human, and out in the woods, it’s a crap-shoot. It could be bear crap, or raccoon crap, or deer crap, or aardvark crap. Who knows? And in the woods, you’ve got a 100% chance of pitching your tent in it.

Speaking of gear, I think it’s pretty absurd that people pack up all the stuff they’re going to need to survive a night in the woods, when they already had all that stuff in the house and didn’t have to leave in the first place. Yep. They pack a flimsy old tent to keep the rain off, a sleeping bag to prevent hypothermia, and some dehydrated rations to rough it in the wilderness, and they were already doing exactly that every single day, only with a roof, a bed, and a refrigerator, except they aren’t sleeping in bear crap.

There is a huge disclaimer at the beginning of the film. The distributor of the film would very much like everyone to know that they don’t stand behind any of the claims in the film, and won’t accept any legal liability arising from any Bigfoot related subject matter in the film that they are distributing.

A bigfoot hunter runs through the woods, drives off-road vehicles, and sometimes slowly stands up from behind the brush wearing one of those camouflage ghillie suits, and this is shown in footage of varying quality, including selfie stick, video clips, and drone, and the shadows of the selfie stick are quite visible. One shot features the bigfoot hunter standing directly in the shadow of the cameraman.

Another dramatic sequence involves the narrator showing off a brand new broken tree branch. As far as footage of tree branches goes, it’s pretty compelling, and if you like that kind of stuff, you’ll be pretty elated with the rest of the film.

To break up the excitement of the broken tree branch, dramatic nighttime footage is shown of an encounter with several slightly offscreen bigfoots resulting in the hunter being struck by a log, which is then followed by panning shots of tractors, footage of cliffside mansions, and scenes of masticating moose. People are interviewed with varying sound levels, and sometimes there is narration over the talking heads, leaving the interviewee’s response a mystery. Meanwhile, ape-like creatures peer out from the flora. Eagles perch majestically, bears gambol through the brush, and ravens eat carrion. Suddenly, there’s a brief plug for a sasquatch book. Then there’s more footage of offload vehicles splashing through streams with chugging, generic rock guitar on the soundtrack.

At 17 minutes and 30 seconds into the film, and yes, I’m just as surprised as you are, the hunter says, ‘I had some pretty sick action last night’, and as per the video footage, he was alone in the woods. Since there was a lot of grunting, I wrongly assumed it was about a hot, woodland, Tinder meet-up. Sadly, it was about apples on a log.

For the big produce fans out there, this portion of the film is considerably apple-heavy, and it’s shot in infrared, which adds a sense of tension and suspense to the fruit. There’s an awful lot of whistling. The bigfoot hunter places numbered apples on a log, and they inexplicably disappear. Big muppetty bigfoot hands reach from behind this log, and slowly remove each numbered apple, which seems like an odd thing for Bigfoot to do, and a waste of time. Why doesn’t Bigfoot take all the apples at once? If it’s pitch-black nighttime, miles from the unyielding fluorescent lighting of nearest 24-hour supermarket, why does Bigfoot insist on concealing himself prone behind this fallen log? I’m supposing it’s because it’s in the script, but what do I look like, a cryptozoologist? To bring you up to speed, this is is a 10-minute apple sequence with whistling, shown in extreme close-up and with multiple replays.

After more narration, superimposed title sequences, and footage of logs, the narrator says to some sort of scientist, ‘I saw you eating some berries. What do you call them?’, and the scientist replies with, ‘I think they’re snow berries’, and then they discuss the berries at length. I’m shocked and surprised no one is poisoned, although they might have just edited out the footage of everyone urgently crapping behind a shrub. No one wants to see that.

Speaking of berry-filled crap behind a shrub no one wants to see, there are closeup shots of large chunks of berry-filled bigfoot scat. The narrator picks a berry which was probably hit by the scat as it fell from the bigfoot, mashes the berry with his finger, and points at the scat for comparison. It is a remarkable sequence, and it has remarkably few apples in it.

Following up the scat sequence is a dialogue-heavy, intensely boring, and lengthy sequence about logs and log placement, which results in more apples. The sasquatch hunter finds a mysterious structure of logs, and places a pear on it. Utilizing superimposed numerals, the structure is investigated thoroughly. It’s uninteresting. More fruit is placed on the structure, which is an absurd sight; like an ersatz, sparsely decorated, ramshackle, Dickensian Christmas tree for Bigfoot.

A fresh bag of apples is shown. A large, supposed bigfoot track is intensely scrutinized. After a sequence of a guy’s boot in closeup, someone pokes more berry-filled scat with a stick.

A lynx walks through the forest, and a new-agey Native American flute plays on the soundtrack. Scientists are surprised that apples are missing, seemingly as though they forgot they placed fruit on logs in the forest filled with wild animals. Then there’s a lengthy sequence where scientists point at moss.

Just when you think this film is really about poly-bagged produce, lichens, and active-lifestyle footwear, there is some shaky cam footage of mysterious figures running through the forest, and hairy-faced creatures lurking amongst the pines, which solidifies my opinion that the forest is a puzzling realm filled with intrigue and fruit which should be avoided.

Discovering Bigfoot is a boring speculative documentary featuring unconvincing cryptids lurking in the woods, and an overabundance of pre-and-post digested fruit.