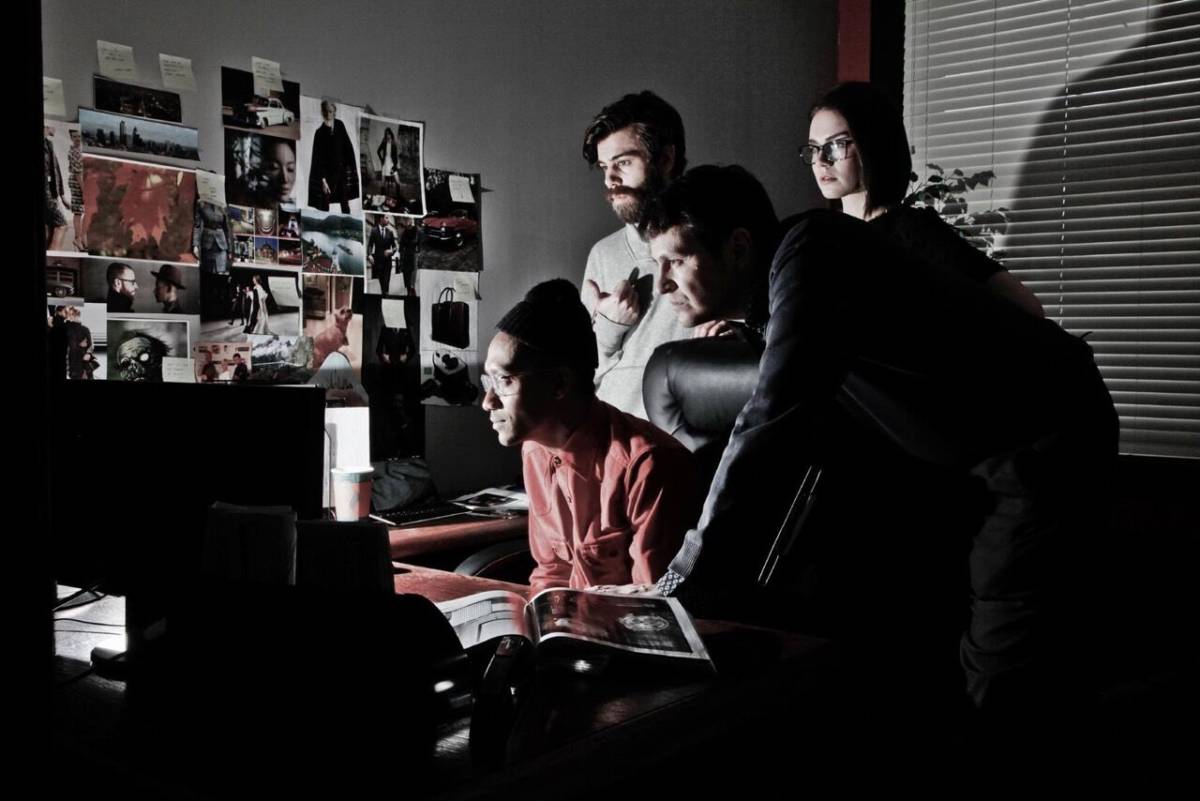 #Screamers is a found footage horror film written by Tom Malloy and Dean Matthew Ronalds. Both of them pull double duty here, with Malloy playing Tom Brennan, the lead character, and Ronalds directing.

Tom Brennan and Chris Grabow (Chris Bannow) are yuppie tech entrepreneurs with a dot.com startup that they hope will be the Next Big Thing. Their site, Gigglar.com, specializes in funny videos. It’s kind of like YouTube, except all the content is curated, and they have a complex data mining algorithm written by programmer Abbi (Abbi Snee) which curates videos based on a user’s interests. A fairly cool story setup, and you start to wonder if maybe the movie is going to explore the data mining angle in further detail. But, no, not really. It comes up, but in more of a peripheral way. Instead, the meat of the story concerns two videos that are sent to the site which go viral. They involve a ghost-like blonde woman named Tara (Theodora Miranne) and a demonic looking fella who pops his head out for a jump scare every now and then. When it turns out that Tara could be a missing person, the team searches for the truth behind the videos.

Given that this is a found footage film, you can probably see where this is going.

#Screamers is one of those frustrating horror movies where the plot only works because the characters are incredibly stupid and get themselves involved in situations that could have easily been avoided. Which is too bad, of course, because it makes the movie feel a lot less organic, which is deadly for a found footage film. I guess a lot of the stupidity could be chalked up to Tom being an arrogant son of a bitch who thinks with his wallet, which he definitely is, but even greed can’t explain some of his bizarre decisions.

There’s also some really incongruous, almost baffling elements that come damn close to ruining the found footage experience. For one thing, the movie has a score. It’s not used often, but the question always arises in these situations: What kind of madman adds music to footage of people who are presumably going to meet some sort of terrible end? I mean, the starting assumption with one of these films is that someone found the footage and assembled it together to accurately depict the events that happened as best as the available video will allow. In order to become really involved in this kind of film, there has to be a utilitarian feel about the assembling of the footage. A soundtrack, however minimal, strikes me as something a bit too “arty” to be convincing.

Luckily, the excellent performances all around balance some of the shortcomings of the plot and editing, though not enough to completely save the movie. In the opening scenes in the Gigglar.com offices, I was almost convinced for a while that I was watching a documentary. Of particular interest to me was Griffin Matthews, who plays, well, Griffin (you might have noticed a pattern with the character names here). Griffin does…I’m not quite sure what…though he seems to do a little of everything around the office. Anyway, Matthews is a very fine actor who really lights up any scene he’s in.

But, like I said, the excellent acting really can’t save #Screamers. I mean, it works as a horror movie on a very basic level in that the jump scares can get pretty intense at times. I spent a good portion of the movie on edge, anticipating the next time the demonic fella’s face might pop up. But this technique is basically the same one used by high school kids on a haunted Halloween trail, as they jump out from behind trees and scream at you. In a film, of course, it does require technical talent, and a scary enough monster to be effective, but, of course, that should only be one of many elements that work, otherwise the audience is only going to remember the few seconds or so that the movie actually scared them.

#Screamers is the third film in the Dread Central Presents series, and I think it’s their first misstep. The poor writing really makes this a mess of a film. There’s certainly real talent involved in this production, but they just couldn’t pull this one off.

READ NEXT:
– Archive 81 Shows That the Found Footage Genre is Made For Podcasts
– 10 Found Footage Movies You Probably Haven’t Seen, But Really Should