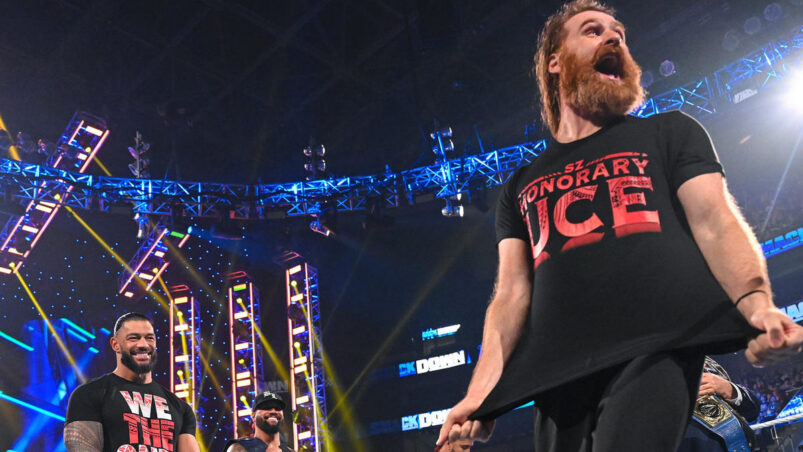 Survivor Series WarGames ended with the ultimate show of unity: Sami Zayn’s former best friend Kevin Owens laying on the mat in defeat and The Bloodline standing tall. To many, it would appear that Roman Reigns has a loyal crew, one who will help him keep the championships he holds with so much reverence. But was WarGames actually the beginning of the end for the Bloodline?

Roman Reigns is a masterful storyteller: following his victory over Drew McIntyre, Kevin Owens, and the Brawling Brutes, the champion was already plotting his next move. Eagle-eyed viewers have been quick to notice the glances he’s throwing Zayn’s way. Whether Zayn knows it or not, he’s still the enemy, and that is why Sami Zayn should be the one to defeat Roman Reigns.

It’s been inevitable from the very beginning. Despite his attempts to fit in with The Bloodline, Zayn is not one of them. Should he slip up, or his loyalty be put into doubt, Reigns and his family will cut ties with the ‘Honorary Uce’ in a swift and brutal manner.

When this turn eventually happens, it wouldn’t be surprising to see Zayn emerge as the biggest babyface in the WWE. That kind of spark can’t be passed up, as fans will be rabid at the thought of the former NXT Champion taking away the one thing Reigns cares about. WWE already missed the mark to hand Drew McIntyre his moment at Clash at the Castle, they can’t do it again with Zayn.

When Zayn is ready to take on The Bloodline he’ll need help. That help can, and should, come in the form of Kevin Owens. If there’s one wrestler that the fans love just as much as Zayn, it’s his compatriot Owens.

It would be poetic to see two NXT black-and-gold standouts, two former independent wrestling cult heroes, and two men with so much shared history, taking on the WWE’s chosen one. Some would argue that KO should be the one to dethrone Reigns in this scenario, but I disagree for one key reason.

Whether it was in NXT as Sami Zayn, or as El Generico in a past life, Rami Sebei has always been one of the greatest underdogs in wrestling. There’s something about him and his wrestling style that makes him so easy to root for. Putting that against Roman Reigns, especially this version of Roman Reigns, is a recipe for something magical.

A wronged Sami Zayn — and, make no mistake, The Bloodline will wrong him — with a wave of momentum behind him could be this decade’s “Yes Movement”. Not only is he arguably just as popular as Daniel Bryan was, but there’s an even better story being told this time. Largely because this one feels natural. Bryan’s path to the title felt like a staredown between an unhappy fanbase and stubborn creative. On the other hand, every piece of this story between Zayn and Reigns feels deliberate.

Be it in the cinematic world of Marvel’s universe or in wrestling with Hangman Page’s years-long chase for the title, long-form storytelling is proving to be an excellent way to build to a satisfying, euphoric climax. For some time now, WWE has been lacking in that kind of long-term narrative to engage viewers. With Reigns already planting seeds of dissent, not to mention Zayn’s complete transformation from conspiracy theorist to main character, this storyline has all the potential to have a great payoff.

Not only would it be a fitting finale to Reigns’ historic run as world champion, but it would cap off Zayn’s rise from being beaten by a celebrity at WrestleMania to the top of the wrestling world. In a larger context, it would also satisfy those who have been on board Zayn’s journey since his run in NXT that first endeared him to many WWE fans.

Quite frankly, after spending years as just a face in the crowd, Sami Zayn needs this more than most. Cody Rhodes is many’s favourite to beat Reigns, but the former AEW man could be too obvious, and his AEW run proved he doesn’t need a world title to be compelling. Drew McIntyre, who is also a great option, has already had his WrestleMania moment and world title win. Seth Rollins, for as good as the story would be, is basically a made-man in WWE already.

Unless someone totally out of left field comes along, there’s no choice that offers more upside than Sami Zayn defeating Roman Reigns to become champion.