Ranking the Futurama Seasons From Worst To Best 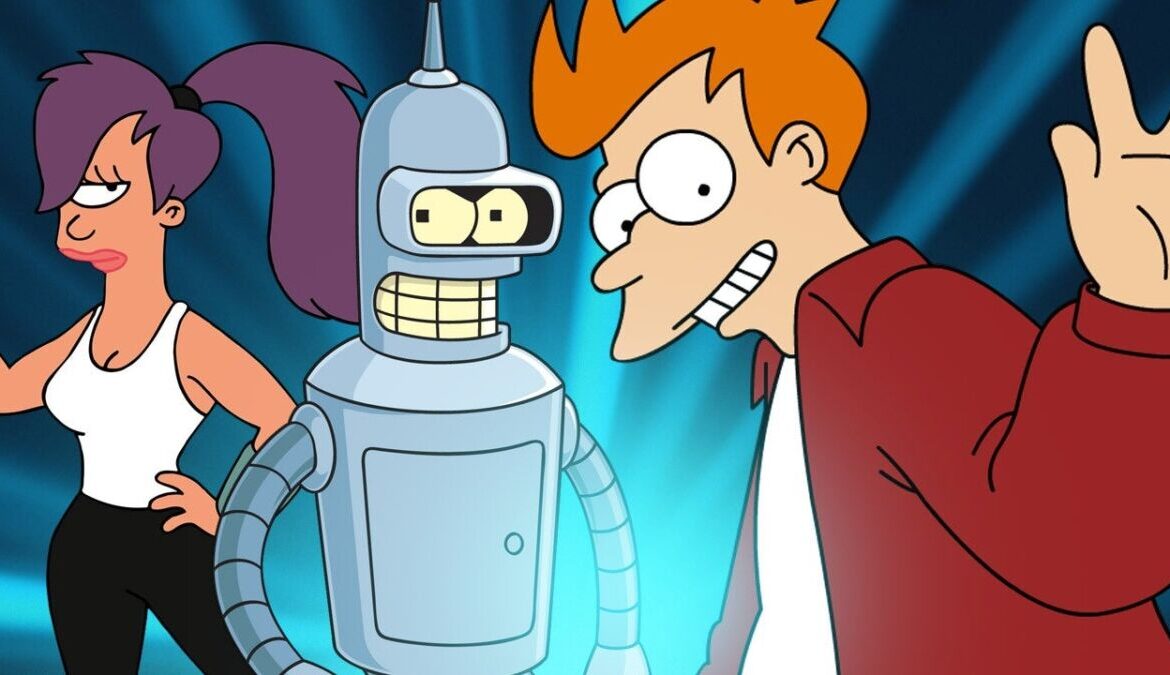 Sometimes you don’t know what you have until it’s gone. The life of Futurama was always a hard one, dimmed in the shade of The Simpsons’ colossal influence and constantly fighting against the looming blade of the commissioner’s axe – Matt Groening’s sophomore series had to fight for every shred of attention and every smidge of acclaim it ever earned. While The Simpsons has gone on to practically define modern viewing culture and boasts an influence and reverence (for the most part) comparable to a low-level religious movement, Futurama’s ten-season run has never quite been able to compare with its juggernaut of an older sibling.

Yet, to reduce Futurama to the status of ‘the other Groening’ show (Disenchantment notwithstanding) is to do it a tremendous disservice. Warm, smart, hilarious and densely written, Futurama stands proud as one of the greatest animated shows of all time. With the show set for yet another resurrection thanks to a deal struck with streaming giant Hulu, there’s never been a better time to get a handle on the best and worst Futurama seasons in a sci-fi saga that never quite got its dues.

NOTE: What constitutes a ‘season’ of Futurama remains a bone of contention thanks to the presence of feature-length specials and some runs having their releases split into separate halves. As such, for this list, we’re using the Disney and IMDb categorisation of what constitutes a season, starting with the first and ending with 2013’s Season 10.

In stark contrast to Matt Groening’s other celebrated animated creation, Futurama’s eighth season represents the nadir of the sci-fi series and the confirmation that the rot had set in for the crew of Planet Express. There’s nothing explicitly wrong with Season 8, apart from the potentially unsavoury gender-swapping antics of ‘Neutopia’, but it’s a season characterised by mediocrity and wasted potential that never lives long in the memory.

Season 8 simply feels like a show going through the motions, or else running low on the high-concept, high-stakes ideas that, at its peak, made it one of the most watchable things on TV. Bender’s journey to become an all-powerful CPU hints at the big ideas that once made Futurama a hit, but when a show is churning out poor-quality anthology episodes and lazy anime parodies, it rarely points to a creation in rude health.

Say what you like about Season 9, but it’s probably the most consistent run Futurama enjoyed during its 15-year history. The problem, sadly, is that Season 9 is consistently average, a bland and uninspired collection of adventures that never horrify or disgust, but that rarely thrill, inspire or heartstring-tug either. Perfectly watchable but as forgettable as a beige cardigan, Season 9 simply exists without ever truly living.

If a highlight can be found, it likely exists in the form of ‘The Bots and the Bees’, a Bender-centric episode in which the narcissistic bending unit fathers a son with the office’s drinks machine and learns, in his own warped way, how to be a better father. ‘A Farewell to Arms’, meanwhile, in which Earth is evacuating following an ancient prophecy’s prediction of planet-ending doom, is also a decent offering. Still, such highlights are few and far between and do little to restore the reputation of the season as a whole. Not a terrible Futurama season, but entirely missable all the same.

Futurama’s tenth and final season goes out with a heart-wrenching bang as ‘Meanwhile’ rounds out its core romance between Fry and Leela in style, but the show’s 2013 run is peppered with too much mediocrity to be considered anything less than distinctly average.

The same problems that are the bane of Seasons 8 and 9 resurface once more in a run that focuses too much on wacky, insubstantial adventures (‘Forty Percent Leadbelly’ and ‘2-D Blacktop’) than anything with any real heart or bite. Season 10 has its moments, such as the Alien-inspired ‘Murder on the Planet Express’, but having Leela mutate into a freakish tentacle monster due to the genetic condition “Squidification” feels like one freakish tentacle monster too far.

The sixth “season” of Futurama holds an odd place in the show’s history and among its legions of loyal fans.

On the one hand, transposing the action to a new format via the release of three feature-length episodes gave the subversive sci-fi soap opera the chance to fully spread its wings and explore its more bizarre or outlandish premises to a more satisfying degree. On the other, the transition from 22-minute episode installments to longer, broader mini-movies did rob proceedings of their pace and flow somewhat, each feature threatening to overstay its welcome as things become a little stretched, confused or just downright bizarre. The tentacle-heavy ‘Beast With a Billion Backs’, for instance, does end up so bizarre at points that it often teeters into the uncomfortably disturbing.

Still, there’s a lot to like from Season 6. ‘Bender’s Big Score’ standing out as a particular highlight, and there’s no doubt that the signature warmth and wit still survive the transition in format even as the runtimes expand considerably. As a break from the routine of ‘regular’ Futurama, Season 6 makes for an enjoyable detour.

Despite the best efforts of some dunderheaded execs to have Futurama pulled from the airwaves forever, Season 7 brought proceedings back with a bang, albeit a relatively small one. The show’s rebirth still bore many of the hallmarks that made it a truly great creation at its pinnacle, but recapturing the original magic proved just beyond the reach of writers likely still reeling from its initial cancellation.

Nevertheless, flashes of brilliance surface enough to make 2010’s reboot worth the return trip, ‘The Late Phillip J.Fry’ bringing time travel back to decent effect while ‘A Clockwork Origin’ takes on the thorny issue of evolutionary theory with mischievous zeal. Worth seeking out is ‘The Prisoner of Benda’, a body-swapping episode that pushes the idea of high concept to its limits while quite literally proving a mathematical hypothesis on group theory in the process.

You didn’t get that on King of the Hill.

If Season 7 was Futurama’s rebirth, Season 1 was its, erm, birth. Establishing a subversive intergalactic sci-fi saga while the spectre of The Simpsons’ colossal success and expectation loomed heavily in the foreground was an unenviable task for co-developers Matt Groening and David X. Cohen, but fears were soon dissuaded by such a confident debut.

Season 1 isn’t as good as Futurama ever got, but it started the show off on the front foot from the get-go, establishing a large and expansive world with ease while making its characters immediately likable, interesting and dynamic. Season 1 couldn’t possibly flesh out the entire lore and internal logic that subsequent seasons would later build upon, but it immediately pushes things in the right direction while most importantly establishing the core dynamic of the show’s iconic central trio of Fry, Bender and Leela. Well worth a watch.

Season 2 isn’t quite good enough to warrant it being acclaimed as one of the very best, but the show’s rhythm and comedic beats become far more established and ingrained as Futurama’s feet become firmly planted under the televisual table. While the turn of the Millennium’s sophomore run might not have truly reached the greatness of its peak years, the movement towards exploring the ground-breaking potential of its rich cosmic world had certainly begun in earnest.

‘Fry and the Slurm Factory’ and ‘Anthology of Interest I’ represent the Planet Express Crew’s ship clunking into something approaching top gear, while the excellent ‘The Problem with Popplers’ ensured Futurama’s reputation as a show willing to tackle big issues while eliciting big laughs. What’s also gratifying about Season 2 is the absence of any genuine duds, and while later seasons would undeniably scale even higher heights, they would certainly also plumb far lower depths along the way.

2001’s fourth season of Futurama returned to screens with one of the show’s finest ever episodes in the form of ‘Roswell That Ends Well’, a paradoxical time-travel caper that sees Fry messing with the space-time continuum when he travels back to 1940s New Mexico and, in a rather disturbing twist better-suited to a Rick and Morty outing, essentially becomes his own grandfather.

Season 4 has so much more to offer besides time-travelling incest, however, such as the revelatory ‘Leela’s Homeworld’, in which Leela discovers more about her mutant past, as well as the exceedingly enjoyable and self-indulgent Trek-orama ‘Where No Fan Has Gone Before’. That’s without mentioning ‘Godfellas’, a surprisingly deep meditation on belief that sees a space-bound Bender become God to a race of aliens grown on his shiny metal case.

If Season 2 pushed the Planet Express crew out of the orbit of mediocrity and towards the horizons of excellence, Season 3 represents the unequivocal arrival at greatness to which many aspire but few actively achieve. Admittedly, there remain a few sub-standard offerings, such as the Zoidberg-centric ‘That’s Lobstertainment’, but for the most part, Season 3 is packed with enough brilliance to see it cited as one of the finest runs the show enjoyed.

Chief among all, however, are the moving, sincere and desperately melancholic ‘The Luck of the Fryish’ and ‘Parasites Lost’, two episodes that blend sincerity and wit while staying true to Futurama’s ambitious futuristic vision.

Like all seasons of Futurama, Season 5 is far from perfect, but it represents the show striving towards its true vision in its most perfect form, introducing emotionally resonant gut punches, brain-melting sci-fi and sweeping cosmic storytelling in absolute spades.

‘The Why of Fry’ and ‘The Farnsworth Parabox’ are both fine additions to the Futurama canon, as is the ridiculously enjoyable ‘The Devil’s Hands Are Idle Playthings’, in which Fry makes a deal with the Robot Devil in order to impress Leela and in the process loses his human hands as part of the bargain.

Two episodes, however, see the show’s fifth run earn its place at the proverbial pinnacle when ranking every season of Futurama.  Firstly, ‘The Sting’, which sees the show delivering a masterclass in story craft that so easily could have descended into derivative cliche but instead emerges as a stonewall all-time classic, and the gut-punching, soul-affecting ‘Jurassic Bark’, perhaps the show’s finest hour in which Fry’s attempts to resurrect his pastime pooch, evoking a quite perfect piece of heart-melting melancholy. For dog and animal lovers, it’s a near-impossible testament to the loyalty and devotion of Man’s greatest, and truest, friend, anchored by the beautiful simplicity of the relationship between a young man and his best pal.

READ NEXT: 15 Best British Sketch Shows of All Time