Your TBR pile can be as topical as you want with some of these reads. 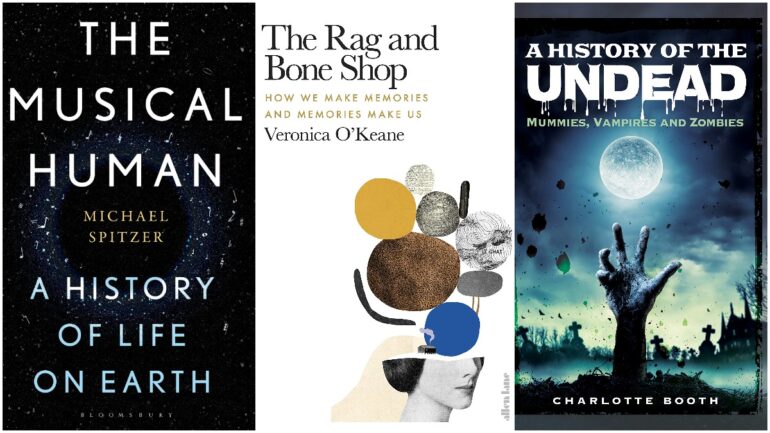 I personally was really into non-fiction books in 2020. I’m not sure why that is, except possibly I didn’t have much brain space for fiction and a book that I could pick up and put down more easily just suited me better. There’s such a vast spectrum of non-fiction books that if you can’t find one that interests you even in the middle of this mess we are in, I don’t know what to tell you. Here are the biggest new non-fiction books of 2021.

Sometimes a non-fiction book just seems like a lot of fun, and A History Of The Undead: Mummies, Vampires and Zombies is no exception.

This book will examine the titular monsters and their representation in Western Media before zipping back in history to explore their mythical origins, and the folklore that surrounds them. If you’re a horror fan as well as a history buff, then this one is definitely for you.

This is definitely a great book for history nerds, especially if you happen to love social history in particular.

Newitz travels to four great cities which were at the centre of sophisticated societies but ultimately abandoned: one Neolithic, one Roman, one Medieval and one indigenous American. As well as examining the sure to be fascinating archaeological evidence, the really interesting thing is that the book will explore the anonymous workers, slaves and women who helped to make the cities great.

3. The Rag and Bone Shop: How We Make Memories and Memories Make Us – Veronica O’Keane | February 4th, 2021

Veronica O’Keane is a practising psychiatrist and this is her first general interest book – and it is one that looks fascinating. Her interests lie in memories and how we process them; why they feel real, or if they can be true and false.

As well as using neurological research to answer some of these questions, O’Keane also explores explore the experiences of some of the patients she has worked with – so you can be sure that it will be an emotional read as well as a highly informative one.

In March 2014, Malaysia Airlines Flight 370 disappeared from radar and was never seen again.

De Changy was working as a journalist for Le Monde at the time, and followed the investigation into the disappearance very closely, noting the chaotic approach and the lack of cooperation on the part of many international organisations. With this book, she brings together all of that investigative journalism to present her own theory on the disappearance. It’s sure to be a troubling read.

Everyone loves some true crime occasionally, and Green’s focus here is the first book written which focuses on the Last Call Killer, who hunted gay men in 1980s and 1990s New York.
As is all too often the case, because of the sexuality of his victims and the timing of his kills – in the middle of the AIDS epidemic – the killer has been mostly forgotten.

Green explores the story and the long hunt for the killer, as well as paying tribute to the victims and their community.

Everyone has heard of Edward Jenner, who first came up with a vaccination for smallpox by using cowpox to infect the patient with a safer illness. But few people know about Lady Mary Wortley Montagu, who actually brought the concept of vaccination over to England decades earlier (and even fewer know that she got the idea from Turkish women who had been vaccinating for ages before anyone European had the idea).

The Pioneering Life Of Mary Wortley Montagu: Scientist and Feminist is sure to be a great exploration of a fascinating and forward-thinking woman who by rights should be much more famous than she is.

If you’re an old school gamer, or someone younger wanting to learn your history, you need this book.

Fish lays out the story of how this industry grew to be bigger than film and music industries combined, starting with experimental games in the 1950s and going all the way through to Fortnite and Gamergate. It goes much deeper than just games; expect explorations of capitalism, gender and culture too.

If there is one thing that most humans can agree on, music is good. That’s essentially what Michael Spitzer is saying in his global history of music, exploring how it became essential to the development of humans and our cultures, as well as how we think and how we behave towards one another and our communities.

Music defines us as a species, makes us who we are, and The Musical Human: A History of Life On Earth could quite possibly be a bit of a magnum opus on the subject.

There is almost nothing I like more than a travelogue, especially if it is recounting a walking journey, so I Belong Here: A Journey Along The Backbone of Britain is right up my street, and should be for any travelogue fan.

Suffering with panic attacks after she was the victim of a racist hate crime, Sethi decided to walk the Pennines; to be close to nature and to try and piece together her sense of home after the racist attacker made her feel she didn’t belong in her own country. I Belong Here is bound to be defiant and laden with feeling.

The 19th June is a US holiday (also known as Freedom Day) celebrating the emancipation of enslaved people on the anniversary of the day that slavery was declared ended in Texas in 1865. This book of essays will explore American history and memoir (Gordon-Reed is a descendent of victims of Texan slavery).

She starts all the way back in Jamestown, before enslaved Africans were brought to the US, and also looks at how Native Americans and Tejanos (Hispanic Texan residents descended from Spanish speaking settlers) are a part of the story. On Juneteenth reminds us that there is still a lot of work to be done.