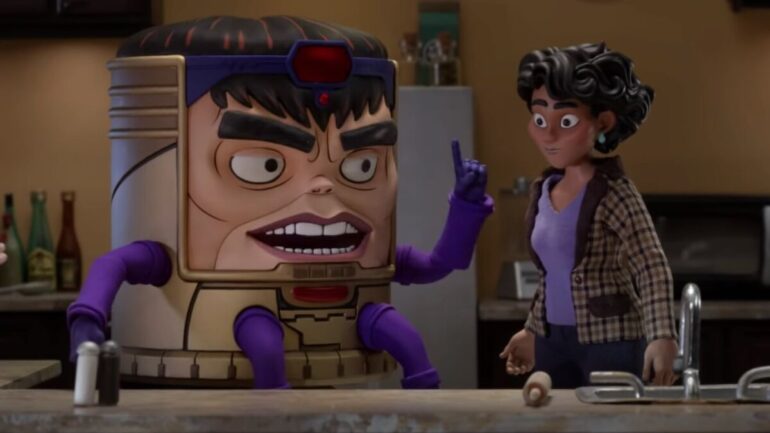 Robot Chicken was what it was – a hyperactive carousel of pop-culture references intended for media-savvy manchildren, and that was fine. It never attempted to be anything else, and it was comfortable in its own skin being exactly that. The one thing it definitely shouldn’t have tried to do is make anyone care about its disposable talking heads, and that’s exactly what Marvel’s M.O.D.O.K. has done, with an actual talking head.

Marvel’s M.O.D.O.K. is just as shamelessly a Hulu-based Robot Chicken derivative (with little Seth Green in the credits and everything) as Solar Opposites was Hulu doing a cut-rate Rick And Morty. I dinged Solar Opposites for its overbearing product placement, but it seems like that’s simply a Hulu thing, because it’s left and right here, too – which adds a depressing edge to the plotline of M.O.D.O.K.’s company haemorrhaging money and having to bow and scrape to a big corporation.

Joking aside, I really can’t emphasise how jarring the product placement is here. Whenever some plot is in danger of happening, there’s even odds that M.O.D.O.K. will have some sort of fit and spend thirty seconds rambling about some consumer product, cramming in the brand name as many times as possible. It’s as if some evil, charismatic cult leader has hypnotised the media industry into thinking ‘you know what’s funny? Things people buy’.

The big joke with M.O.D.O.K. himself is that he’s an ineffectual tit of a supervillain. This is a combination which makes him a particularly bad protagonist. Lovable losers can work as a lead, villain protagonists can most certainly work as a lead, stick them together and you get what Chris Morris once called ‘an underdog so ugly the audience is incapable of any sympathy, no matter what befalls him’. When, occasionally, M.O.D.O.K. remembers his goal in life is to conquer the world – because he does get distracted, frequently – we are left to wonder why we should really care.

In many ways Marvel’s M.O.D.O.K. is crippled by being little more than baby’s first attempt at deconstruction, in a genre that’s been deconstructing itself since the 1990s. The supervillain has a home life with a wife and kids? The employees of the evil corporation are subject to the usual dull workplace nonsense? Can you just believe it? Yeah, frankly, I can, and it makes me miss the days of silver age lunacy when a rainbow beast would turn up to make Batman two-dimensional.

Now, it would be unfair to criticise Marvel’s M.O.D.O.K. on the ground that there have been deconstructions of the superhero genre before now that did it much (much, much) better than this. But both strands are employed in so helplessly trite a fashion that there are hitherto uncontacted tribes in West Papua who’d find it unoriginal. His marriage is on the rocks, he can’t connect with his kids, and, hey, did you know corporate-speak is kind of boring? Forgive me if this soap-opera material is making you nod off.

M.O.D.O.K.’s family, incidentally, aren’t great co-stars. His wife and daughter can at least occasionally pull off the kind of amusing nastiness you’d hope for from a supervillain’s family, but his son is just static noise. The word ‘wacky’ was clearly somewhere on the character description, and it shows as he babbles out one non-sequitur after another.

I can’t fault the son too badly, though, since he’s just a particularly glaring example of the wider problem – not one exclusive to this show, incidentally – where dialogue is less ‘interacting with other characters’ and more ‘free-form reference-heavy quirkiness’. The son, admittedly, never leaves this level, but nigh-on every other character present dabbles in it, riffing on any and all pop-culture topics that pop into their heads, and in doing so come off more like stand-up comedians in a tight spot than actual people.

This leads directly into a cardinal sin of comedies. When you have laid this blithe groundwork, in which there is no suspension of disbelief and all the characters are clearly doing a bit, you’ll then find yourself stymied when trying to drum up any sort of actual sentiment. But dear God, how they try, having limb-severing, face-lasering supervillain M.O.D.O.K. start blubbing at the drop of a hat in a vain attempt to get the audience to feel something.

Being an official Marvel product, Marvel’s M.O.D.O.K. is allowed to wheel out all the copyrighted characters from the Avengers flicks, whose action figures are available in a store near you. It’s understandable that they don’t use Iron Man too much, lest it become his show, but his appearances barely even broach the cameo level. Annoyingly, he’s an obvious choice for the foil, the one who plays up all M.O.D.O.K.’s little foibles and flaws – instead, this is left to some store-brand original characters, who flit into existence and then vanish as the plot demands.

The stop-motion format allows a lot of visual invention, so it’s only a shame there isn’t more of it. A great deal of the show is just straight dialogue which, visually, might as well be a child bashing two action figures together and putting on silly voices. That, however, suggests a level of spontaneity and joy which is absent here. It’s all clearly very deliberately constructed, as given away by the inexplicable use of shaky-cam, a painstaking recreation of something that usually wouldn’t happen in this format.

There is one good fight scene, which actually has a bit of creativity and amusement to it (you’ll know it when you see it). That, from a total tally of far too few fight scenes for any work involving maniacal supervillains. The rest mostly involve an overuse of blood effects which look like jam, another Robot Chicken staple and another element which is intrinsically better suited to a series of unconnected sketches than anything with an actual plotline.

In the latter episodes of Marvel’s M.O.D.O.K., there’s a weird running thing where the characters are themselves calling M.O.D.O.K. tedious. Their word, not mine. The word chosen by the writing staff, spoken by the cast, people who presumably all thought this was a worthwhile endeavour – tedious. Well, let me not contradict them any further. 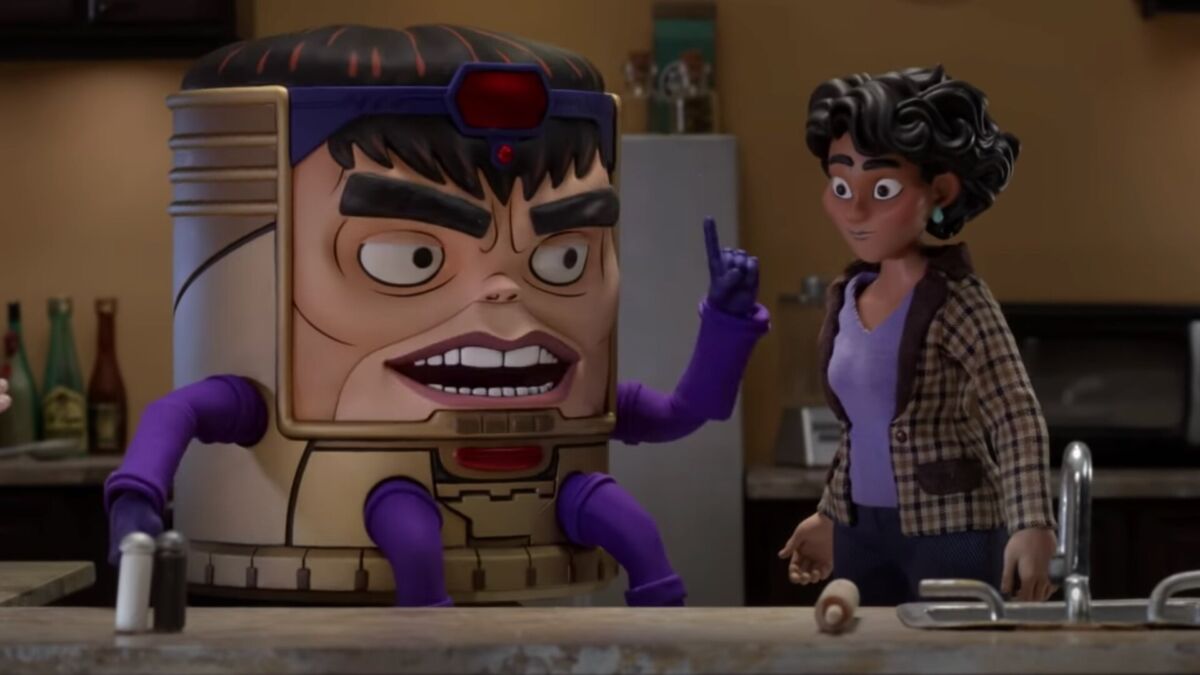 Verdict
Turns out there’s a reason Marvel’s lesser-known characters are lesser-known. Stay tuned for the adventures of Spider-Man’s second cousin or something.
4
Cultured Vultures is a pop culture website established in 2013 covering all things gaming, movies, and more. We eat your words.
All The News On Your Favourite Games